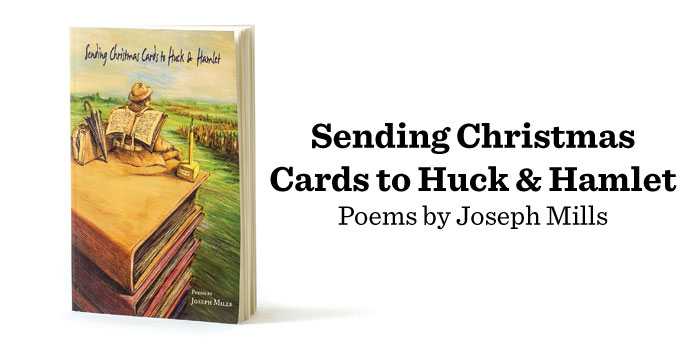 “A poem is . . . the equivalent of a cigarette or a Belgian chocolate. It gives an intense emotional charge in a short period of time. So, too many too quickly will become overwhelming. Chain-smoke a pack of cigarettes, and you’ll feel nauseous. Eat a box of chocolates in one sitting, and you’ll feel sick. Poems are the same.”

Strange advice, this coming from the poet Joseph Mills. Your dentist doesn’t endorse brushing in moderation. Your pastor would never tell you that you’re in church too much.

Mind you, I believe what Mills says about the smokes and the candy. But this poem business? I don’t buy it. Several times I’ve picked up Sending Christmas Cards to Huck & Hamlet planning to have just one of Mills’s poems. Some while later, I realize I’ve wolfed down the whole book in one sitting. Again. And hey, I feel great.

Mills teaches at the University of North Carolina School of the Arts, and Sending Christmas Cards is his fourth book of poetry. In the poem that gives his book its name, the poet does exactly what the title says: He sends cards to Huckleberry Finn and to Shakespeare’s Hamlet, both of whom were once close to him. Huck, he muses to himself, must be at least middle-aged by now, and Hamlet probably tried a couple of graduate programs but was never much of a finisher.

Sending Christmas Cards has poems about shoveling manure, about Rumplestiltskin, about a Sunday morning estate sale, and one from the point of view of Grumpy the dwarf. There are poems about poems, and before you assume that those are pretentious, let me tell you that one of them is titled “why poems make some people nervous.” Another opens with the lines: “A student smacks the book on to his desk, / looks around, and says, ‘I hate poetry.’ / Several nod, thrilled to have someone voice / what they feel.”

I won’t tell you not to chain-smoke or pig out on sweets, but never mind what Mills says about poetry in moderation. Pick up his book, and do what you like with his poems. Savor them separately, or suck them all down at once. Either way, they won’t be bad for you.

Don’t worry.
This poem isn’t difficult.
There are no hidden meanings
that make you feel stupid
when someone points them out.
It capitalizes the letters you expect,
it doesn’t use punctuation in weird ways,
and it doesn’t jam words together
or scatter them around the page.
The line breaks aren’t significant;
they’re only here to reassure you
this really is a poem
(and not one of those paragraphs
some people insist are poems
but you can’t figure out why).
Most importantly, this poem isn’t long.
It’s not even a page.
It will be over soon. Like a shot or a pill.
It’s not one of those unbearable poems
that go on and on sometimes
for as many as three or four pages
until you have to scan ahead to see
when it will finally be over.
No, this one is short.
In fact, you were done a little bit ago,
and this part here is just hand-holding
to make sure you don’t
suffer from any ill effects.

— Reprinted by permission of the author