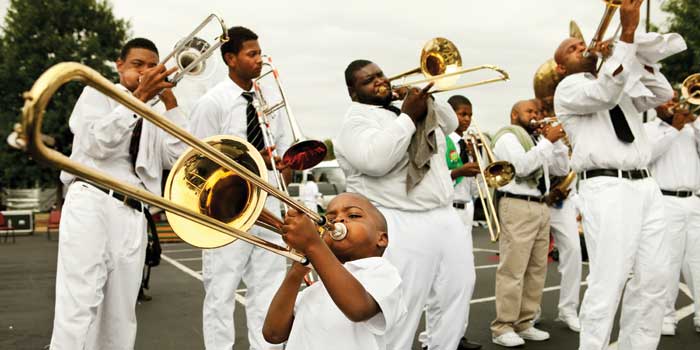 Hands clap. Feet stomp. And heads sway from side to side when the trombones wail.

From the first note, the spirit takes over, and the Bailey Clouds of Heaven brass band coaxes the audience to its feet. The assembled exhort the Clouds to dig deeper, so they can be moved to new heights of praise.

The band, which includes trumpets, baritones, saxophones, drums, and sousaphones, obliges, and launches into a call-and-response interaction between the Clouds and the congregation.

If Gabriel took an earthly gig, he’d join this band.

The United House of Prayer for All People and its shout bands, including the Bailey Clouds of Heaven, are rooted in North Carolina, mixing dynamic preaching with showstopping musicianship that energized black communities during the days of segregation. Band members don’t preach, but they’re integral to worship services as an upbeat, musical bridge to the Word, awash in a sonic tide of jazz, blues, gospel, and Dixieland.

In the 1920s, a charismatic preacher from Cape Verde, Africa, named Bishop Charles Manuel Grace, visited Charlotte after forming the United House of Prayer for All People in 1919 in Massachusetts. He found an opportunity to spread the Pentecostal faith’s message beyond the Mason-Dixon Line. Noting the success of racially exclusive tent crusades organized by white preachers in the South, Grace expanded the concept to the black community, using Charlotte’s Brooklyn neighborhood as the base.

Grace was a master of promotion, deploying a car as a rolling billboard, covered with verses from Scripture and an angel on the roof urging people to see “Sweet Daddy” preach. Brass bands added a creative element to the sermon that proved so effective at winning converts that Charlotte became an anchor in the House of Prayer’s membership base. Today, Charlotte is home to 20 House of Prayer congregations within a 20-mile radius.

Cedric Mangum joined the band as a 7-year-old in 1968 and learned every instrument in the band before taking the lead on trombone. To watch Mangum play — cheeks billowing as he blows into the mouthpiece, right hand pushing the slide in and out — is to understand why the band is a ministry.

“Our music feeds the soul,” Mangum says. “It’s designed for the soul, and that’s what draws the people.”

The Clouds aren’t typical church musicians. They’re church emissaries and have been since 1965 when Grace’s successor, Bishop Walter McCollough, launched the group as the No. 2 Shout Band. The Bailey Clouds of Heaven, which consists of eight to 10 musicians, now performs almost daily. The Charlotte Mother House on Beatties Ford Road holds services six days a week, in addition to performances across the country and overseas.

“It’s something to draw people toward the House of Prayer to come in and seek more,” Mangum says. “Who knows? The music just might be a bait to grab on to the hook for them to come.”

Pageantry in the streets

The exact origin of shout bands is uncertain, but North Carolina is at the heart of their development, with 17 in the state by Mangum’s count. House of Prayer congregations in Gaston County were at the forefront of setting gospel messages to a secular tempo in the early 20th century. But Charlotte churches gave the concept a cultural foothold through Grace’s preaching, parades, and mass baptisms.

At the denomination’s annual fall convocations in the 1920s, thousands lined the route in their Sunday best to watch the procession. There were women and girls in flowing white dresses; men and boys in dark suits, white shirts, and ties. The marching band consisted of drums and brass. Grace, resplendent with long, curly hair and a tailored suit, rode in a luxurious automobile or float, leading the way to Lakewood Park for a mass baptism of new converts — black and white — by dunking them in the lake. Twenty thousand people packed in to watch in a town with a population of only 30,000.

Photos from the time show brass bands accompanying Grace at mass baptisms. But trombones, because of their expressive tones, became the dominant instrument 20 years later, adding theater and new converts to the faith.

The combination of Grace’s preaching and shout bands proved potent in spreading the House of Prayer’s message, especially during those massive parades. Throughout a time of strict segregation, the processions of colorful uniforms and gleaming brass instruments were a source of pride to black people, who were limited in social and religious options. Thousands lined the parade route shoulder-to-shoulder to cheer, shout, and dance. It was pageantry in the streets.

Taking it to the aisle

The Clouds of Heaven have a songbook of traditional and original songs like “Lord, I’m Troubled About My Soul,” “Keep Oil in Your Vessels,” and “Ease My Troubled Mind.” The band changes gears when the message and mood require. The songbook is used mostly as a resource. The spirit provides guidance.

“You can’t write it,” Mangum says. “You can’t preplan what’s going to happen. God is always in charge.”

The spontaneity resonates with people who have no connection to the House of Prayer. The power of a shout band — especially the wail of the trombone — creates a spiritual connection between musician and audience.

“It is so different from the church that I grew up in where everything’s written down and planned out ahead of time,” says Hanchett, who was raised Episcopalian. “I was raised with the expression ‘as the spirit moves,’ and I didn’t understand it until I went to the House of Prayer.”

The Clouds’ reputation has grown as the band expanded its touring during the last couple of decades. The members played across the United States and Europe and recorded a compilation album on shout bands commissioned by the Smithsonian Institution. No matter the venue, the band’s energetic praise is reciprocated.

The energy is infectious when the Clouds play. As the band sways, the spirit moves about the congregation as heads nod, feet pat the floor, and hands clap. No one is too old or young to join in as the faithful take to the aisle. Hands wave, and whoops of joy mingle with the brass. At its peak, it feels as if the doors are challenged to stay on their hinges while the trombones’ notes reach the heavens.

Herbert L. White is editor of The Charlotte Post. His most recent article for Our State was “Oh, Won’t You Stay?” (July 2012).