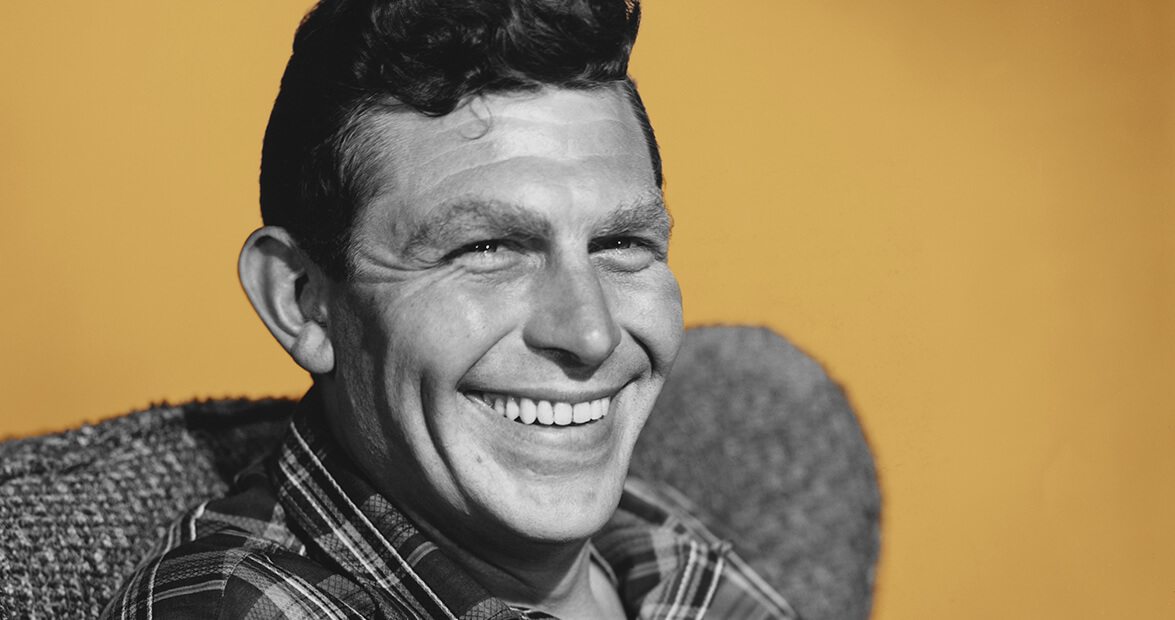 1960: The Andy Griffith Show debuts, putting Mayberry on the map. This historic date is included in our 50 Moments that Made NC.

The actor Kevin Bacon, with his six degrees of separation from every human on the planet, has nothing on Andy Griffith. In North Carolina, we’re all easily just a degree or two from Andy’s greatness.

I grew up in Mount Airy — Andy’s hometown and, some say, his inspiration for Mayberry — so the number of connections I have to him may be unusually high: According to my oldest sister, Donna, our aunt Helen Hayes sang with Andy in the Mount Airy Glee Club and on the radio. My cousin Mo told me that my aunt Hallie Mae Dockery, a drama major at UNC Chapel Hill, had a few classes with Andy. My dad said that Andy’s parents traded with my granddad at his hardware store on Main Street. My cousin Tracy Hayes, a notable dog trainer from Poplar Springs, once shared a duck blind with Andy. And my wife’s priest at UNC’s Newman Center once got a call from Andy to come administer last rites to a dying friend. I could go on.

One of the wonderful things about growing up in a small North Carolina town is feeling connected — to neighbors and strangers alike — and that was certainly true in Mount Airy. In Mayberry, that sense of connection among characters is an essential part of the show’s lasting appeal. Over the past 25 years, I’ve seen quite a bit of America and the world while producing television shows, and when I tell people where I grew up, they often smile and recount a favorite episode.

The Andy Griffith Show first aired on CBS on October 3, 1960. When the final half-hour episode — number 249 — ran eight years later, it was one of only three American television shows to end its primetime run at No. 1. Almost 50 years later, people continue to watch reruns of Andy taking the moral high ground, and come to Mount Airy for a glimpse of Mayberry, that enduring symbol of small-town life. 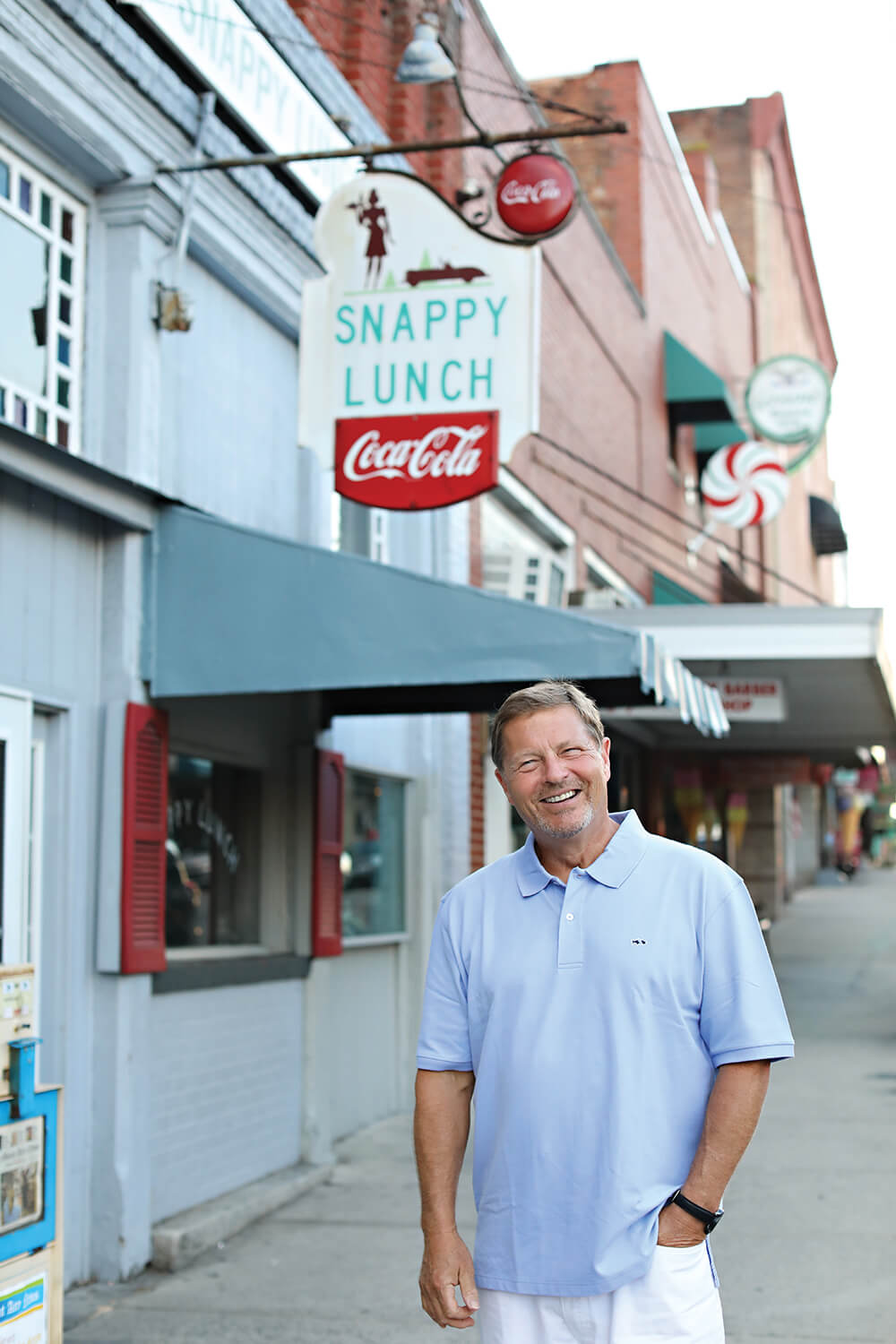 On the small screen, Bill Hayes’s productions have brought American family life to a global audience. With his big-screen documentary, The Real Mayberry, he hopes to show the world his beloved Mount Airy — past, present, and future. photograph by Sara Brennan

Growing up, the real Andy was living proof that you could come from a small Southern town and go out into the world and be a success. His story was the story we looked to for hope: A boy from the working-class side of a small town goes off to study at one of the great universities of North Carolina; he becomes a teacher, and then makes it big in both New York and Hollywood. And when he returns to his home state, his legend continues to flourish.

Andy was an incredibly prolific actor and musician, so it might have been his work that kept him from coming back often. He was an only child, and unlike me, he didn’t have strong family ties to pull him back to the foothills of the Blue Ridge Mountains. Other than his childhood pal Emmett Forrest, not many local people stayed in close touch with him. Ultimately, he settled near the North Carolina coast, an equally wonderful place to call home. Perhaps he fell in love with the area after starring as Sir Walter Raleigh in The Lost Colony, or maybe it was while shooting the series Matlock in Wilmington and Manteo. Maybe creating Mayberry was his way of being connected to his hometown without actually going home.

Like Andy, when I was young, all I wanted to do was leave and see the world. And, like Andy, I left for college, although I chose Duke instead of UNC, and became entrenched in the world of producing television. But unlike Andy, I never really aspired to live in New York City or Hollywood. I’ve spent lots of time working in both places, but I’ve been blessed to be able to build my television career on native soil — in Chapel Hill and Carrboro — even though our shows are shot and broadcast throughout the country and the world over.

So now, after helping to create more than 1,000 shows that often focus on families, their triumphs and disappointments and foibles, I’ve turned the camera toward Andy’s and my hometown, in a documentary called The Real Mayberry. (At a recent screening of it, a guest told me — right on cue — that his dad taught Andy how to drive.) What started as a fun journey into the past has evolved into a much-needed look at the challenges that small towns like Mount Airy face in overcoming lost jobs and the migration of young, talented people to big cities.

Mayberry still exists in lots of places; North Carolina is still mostly rural and has scores of small towns like it. (Though, to be fair, there’s only one that can boast the largest open-face granite quarry in the world and the final home of Siamese twins Eng and Chang Bunker.) As I grow older, I see my Mount Airy through different lenses: I see the rich history, the challenges, and the potential. I also see the trails, rivers, mountains, and inordinately friendly downtown. But it’s a town in the process of redefining itself, too. In that way, Mount Airy has become, once again, “Every Small Town, U.S.A.” Yet, amid all the changes, the original Mayberry spirit of connection and goodness is alive and well there.

I can’t think of anything more worthy of exploration and celebration — more worthy of Andy’s legacy — than finding ways to help our small towns survive and prosper while protecting the heart and soul that made us love them in the first place.