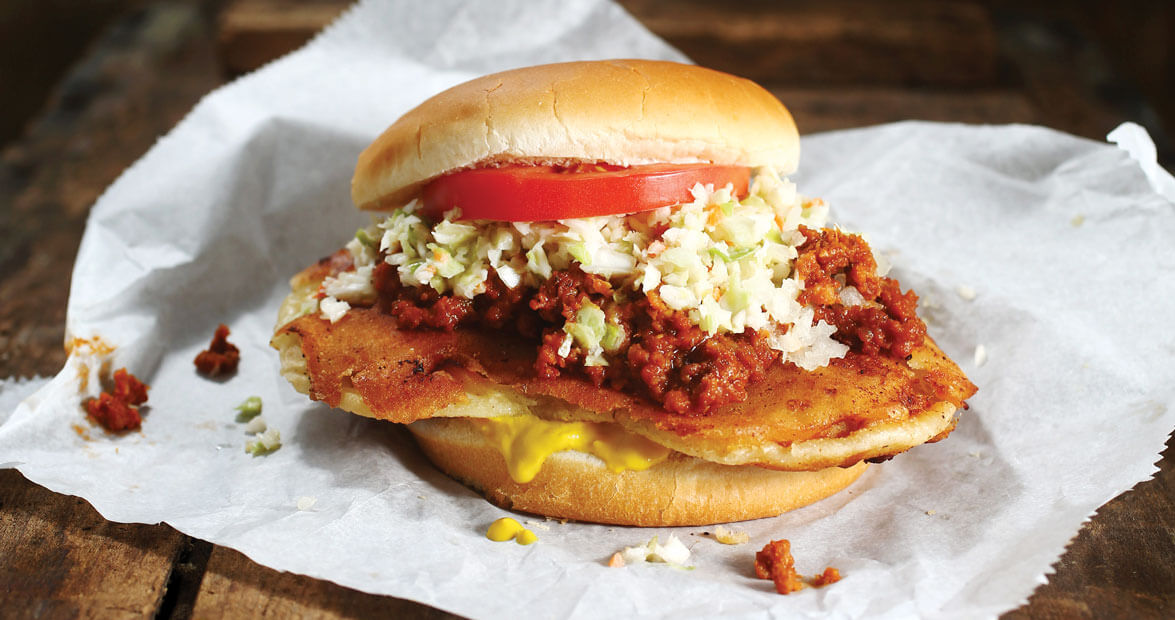 EDITOR’S NOTE: This story was originally published in the February 2015 issue of Our State.

You need a fistful of napkins, especially if you get it, as they say, “Charlie’s way.” That’s with coleslaw, mustard, chili, onion, and tomato. And the meat, well, the meat is three and a half ounces of pork tenderloin, sliced down the back, bathed in a sweet-milk batter, and fried for 10 minutes or so on a griddle by a big front window for everyone to see.

And everyone does see.

They stand at the window and stare like it’s a circus sideshow. They take pictures, wave, and prop a small child on a window ledge so everyone outside can watch the pork chop turn from blond to brown.

These sandwich fans will drive for hours and stand in a line that snakes past two storefronts so they can eat, on a bun, a piece of fried pork bigger than a dessert plate. It’s an entire meal, subtle in taste and surprisingly messy. Coleslaw, mustard, and chili drip down your fingers. This is the “Famous Pork Chop Sandwich.” Says so right on the Snappy Lunch T-shirt. 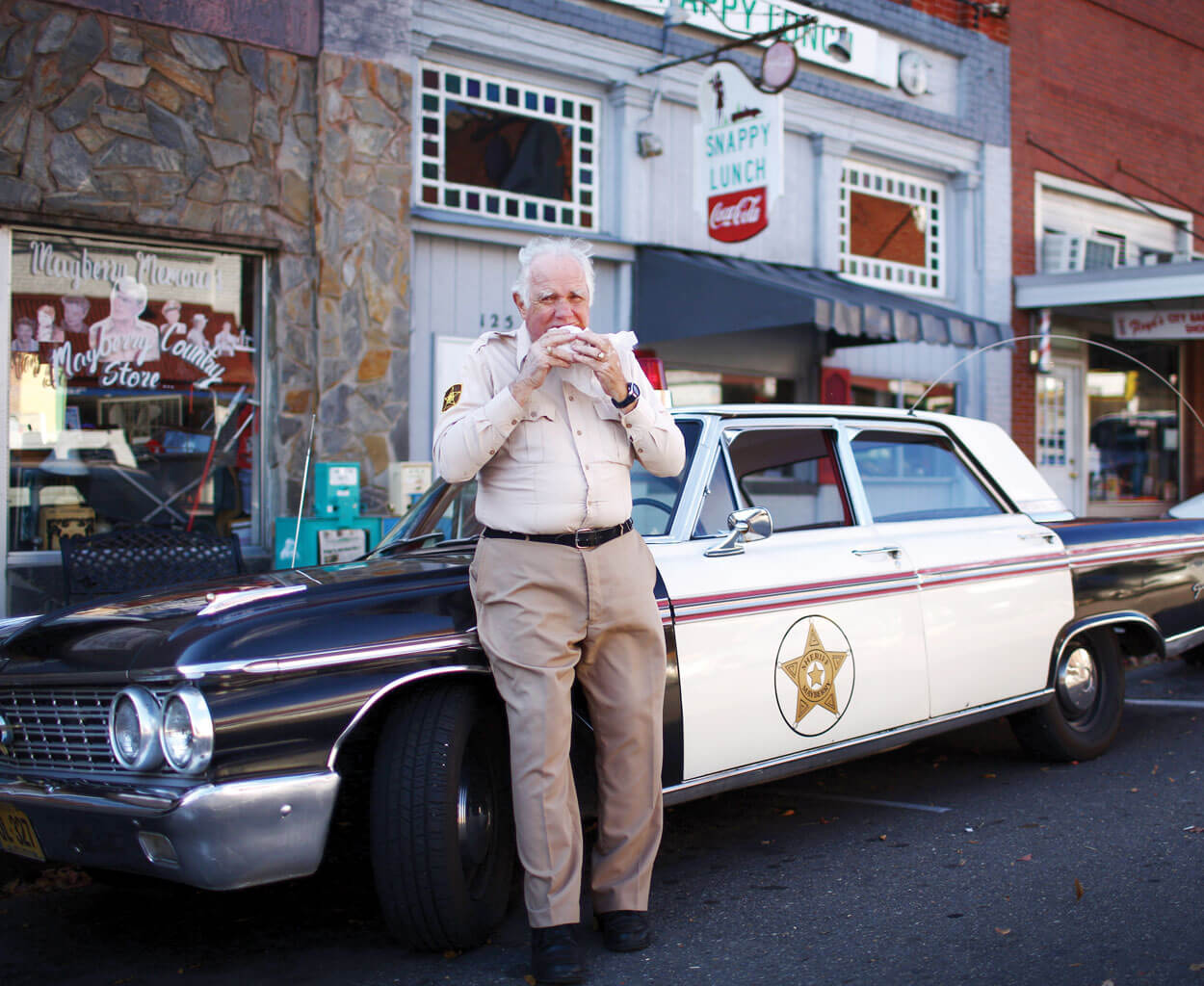 Roger Sickmiller munches on a pork chop sandwich between giving tours of Mount Airy in a retro squad car. photograph by Travis Dove

Snappy Lunch sits at the bottom of North Main Street in Mount Airy — two rooms with three stools, 10 booths, and 12 tables. Snappy Lunch used to be a post office and a shoe shop, and got its name when it opened in 1923 because customers used to say, “I want a sandwich, and make it snappy!’’

Now it’s a place where the fictional life of Mayberry really exists. Pictures from The Andy Griffith Show hang on the walls, and when impersonators from the show’s make-believe town filter in, no one even blinks.

Andy Griffith, Mount Airy’s most famous resident, comes up in almost every conversation, and customers in booths or at the counter zero in on the most picayune of details from a show that started more than a half-century ago.

But really, everyone wants to talk about Charles. Charles Dowell. He died in 2012 at age 84. Yet at Snappy Lunch, he’s still very much alive. He’s the man in the white hat with an eighth-grade education who owned Snappy Lunch and turned it into a tourist destination with help from The Andy Griffith Show. And his way-famous sandwich.

He invented the sandwich. Why? For people with no teeth. But there’s more to that story.

Seth Dowell-Young, 28, mans the grill at Snappy Lunch. Big as a wall in a ball cap and white apron, he’s known to a few customers as the “Gentle Giant.’’

Seth is legally blind. But he can see what happens on the other side of the window. “You feel like a big fish in a fishbowl, and they ask all sorts of questions, like, ‘Are those apple turnovers?’ or ‘Are those fish?’” he says. But mainly they ask about Charles.

“They’ll say, ‘What about the nice guy who used to be here?’ and I’ll tell them that he passed away in 2012, and his wife and daughter taught me everything I know,” Seth says.

Seth is married to Jamie, Charles’ daughter, and they make quite the pair. Seth stands 6 feet 6; Jamie is 5 feet 2. Jamie, 26, has a day job teaching fifth grade. But after her dad’s death, she became part owner of the restaurant with her mom, Mary, and waits tables and works the register on Saturdays. It’s important that she keep her dad’s legacy going. Her dad is Snappy Lunch. And so is she. 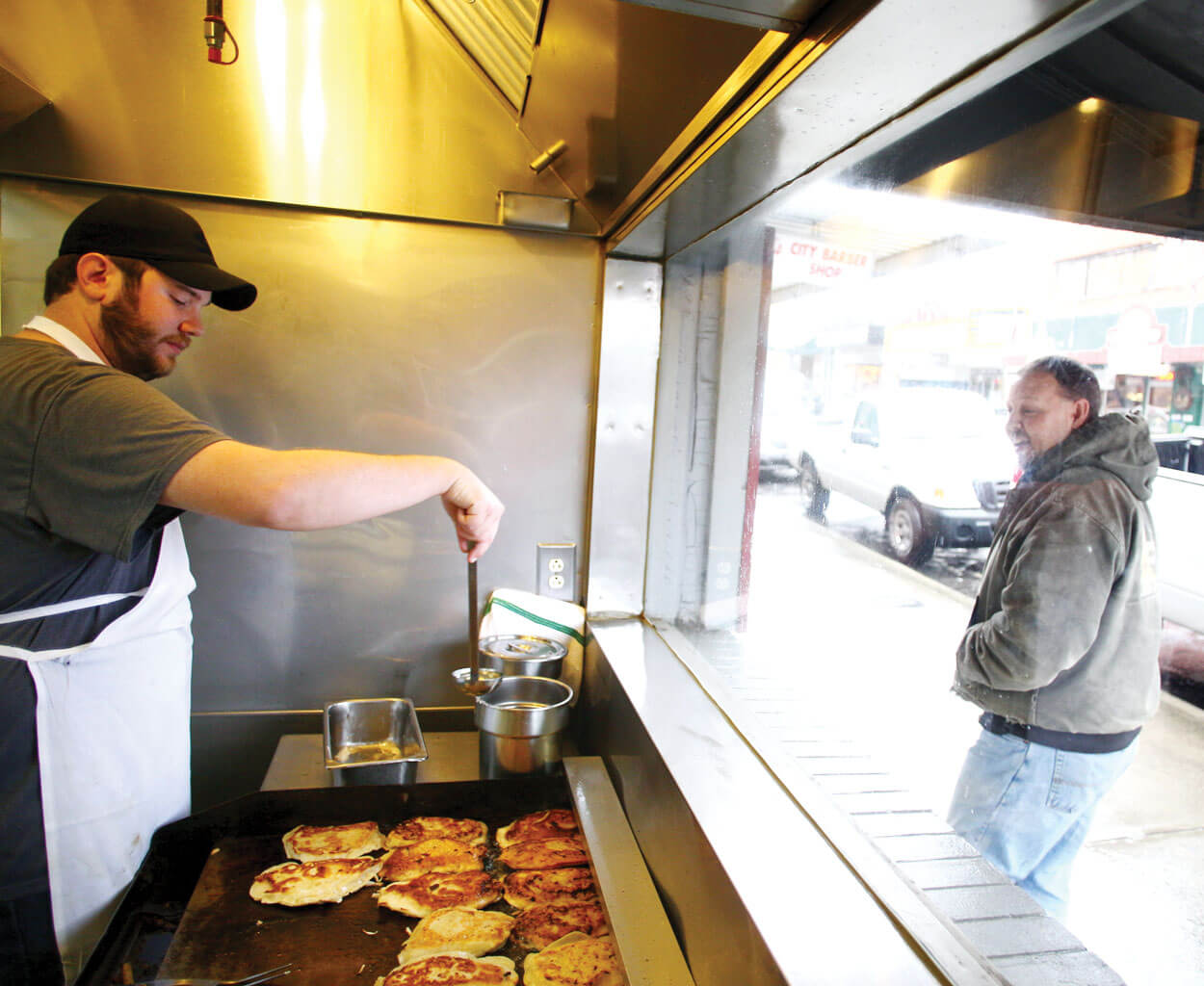 Visitors watch Seth Dowell-Young at the Snappy Lunch grill as he carries on the tradition begun in the 1960s by Charles Dowell, his father-in-law. photograph by Travis Dove

As a third grader, Jamie ran the register on the weekends. As a sixth grader, she waited on customers and brought drinks when she wasn’t doing homework. In between, she participated in the Mayberry Days parade in late September, by pulling a red wagon with a “Snappy Lunch” sign attached.

Customers see her now, and know. “You must be Charles and Mary’s girl.” She tells them that she is. “We realized that he bought into the restaurant himself when he was 23,” Jamie says, “and I was about 23 when he passed away, and he left it to me in the will. That was a really neat and eerie connection. And people always tell me, ‘You have got to keep this going as long as you can.’ They don’t want to see it fade out and neither do we.”

So they come for the tangible feel of Mayberry. And that sandwich.

“It’s a piece of my dad in some way because it’s something he created, and in that small way, he can kind of live on through that by making customers happy,” Jamie says. “I think the appeal is its simplicity. It’s not some fancy feast, and it relates to The Andy Griffith Show, to a simpler time. People appreciate that.”

But about that sandwich.

Charles invented it sometime in the early 1960s. No one really knows the date, but Russell Hiatt remembers the moment. He’s 91, the longtime barber of Floyd’s City Barber Shop next door. He also remembers the excitement in Charles’s voice over his new sandwich.

“I remember him coming in and saying, ‘How ’bout this sandwich, Russell! You want to try a pork chop sandwich?’” says Hiatt from the three-chair barbershop. “I did, I liked it, and it was big. But people are funny. They started coming from everywhere to eat that sandwich.

“Now, people come in, and I tell ’em I cut Andy’s hair. Cut it right here in this chair. And they always ask about the pork chop sandwich, and I’ll say, ‘That’s where it is. You gotta try it. Go next door.’”

Charles got the idea from his childhood. He was beefing up the Snappy Lunch menu, and thought about adding a pork chop sandwich because he remembered when they were popular in Mount Airy restaurants.

But back then, the pork chop had a bone, and Charles knew he had to get rid of the bone. “I have people who come into Snappy Lunch with no teeth who can still eat my pork chop sandwich,” he liked to say.

He’d cut the pork into thin slices and slip it into a contraption that looked like a big toaster, a machine he called “The Tenderator,” that weighs at least 50 pounds. He found it at a yard sale, and quickly realized that this big toaster made the pork incredibly tender.

Charles Dowell was the seventh of 15 children, the son of a prominent grocer who was known as a stern disciplinarian. Charles ran away from home at 14. His dad tried to coax him home, but Charles didn’t come. He lived in abandoned buildings. Then, one day, one of the owners of Snappy Lunch saw him walking along North Main and asked, “Hey, you want a job?” 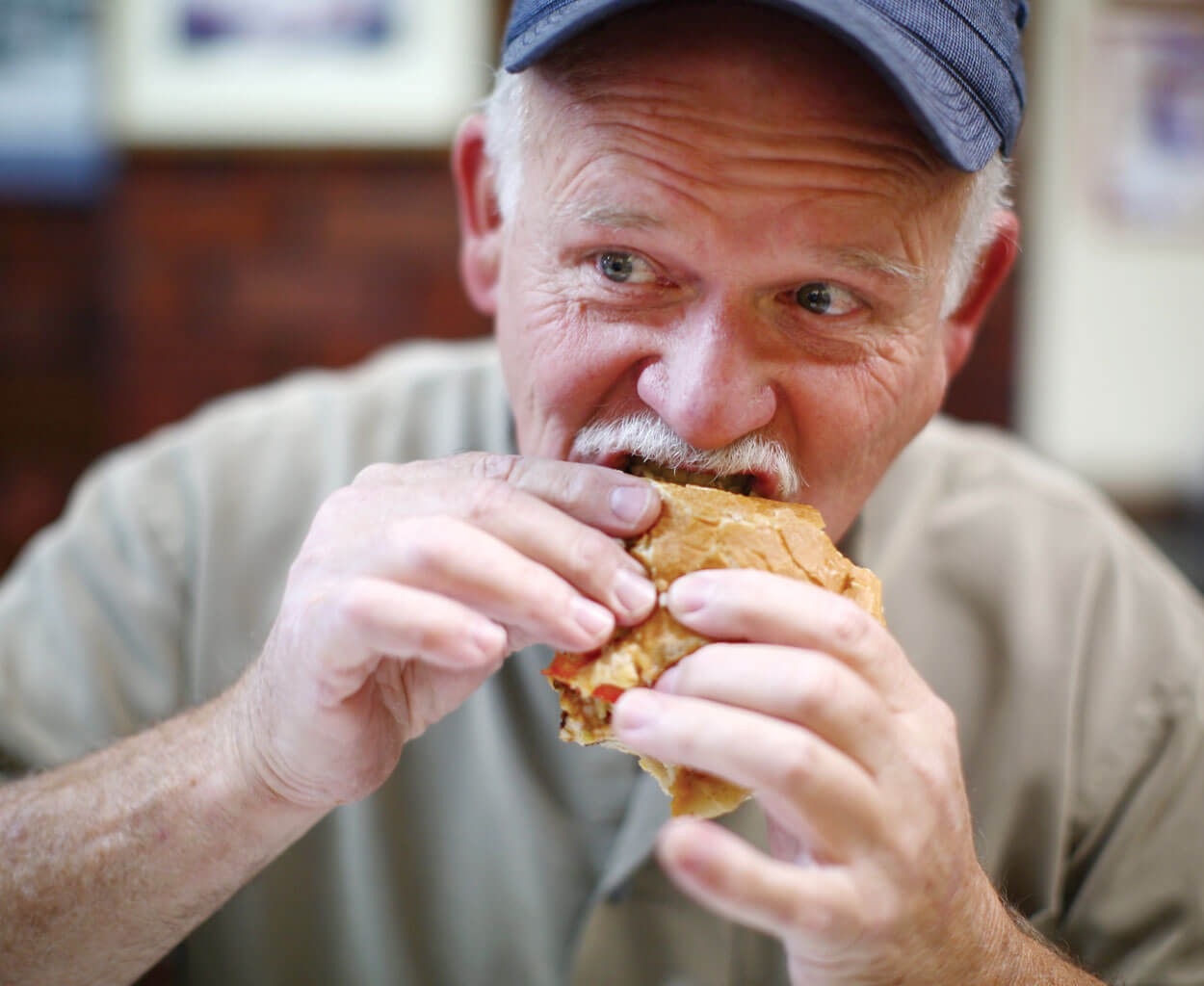 By 1960, Charles became the full owner. That same year, Andy Griffith name-checked the restaurant in an episode called “Andy the Matchmaker,” when Andy tells Deputy Barney Fife that they ought to go down to Snappy Lunch and get a bite to eat. The restaurant became the only Mount Airy business ever mentioned during the eight-year run of the show.

“When he was watching TV that one night and heard Andy mention Snappy Lunch, he almost came off the chair,’’ says his wife, Mary, laughing. “He couldn’t believe it, and like myself, he couldn’t imagine Snappy Lunch getting recognized all over the world. We’re a small place in a small town. It’s hard to fathom that.’’

Mary is 62. She’s 24 years younger than Charles, and she came to Mount Airy from a small town in Virginia to work as a seamstress. She met Charles, in all places, at Snappy Lunch. Charles proposed to her at Snappy Lunch, and they got married a week before Thanksgiving in 1985.

Three years later, Gourmet magazine ran a story about Snappy Lunch — and the pork chop sandwich. “Guess what?’’ Charles would say, bringing out the magazine for everyone to see. “I’m on page 98.”

But usually, customers would find Charles at his perch by the grill at the window, aping for the camera, sticking a breaded pork chop on the end of a fork, and acting like he was taking a bite.

That was his window to his world. Now, it’s become his son-in-law’s window. And there, Seth Dowell-Young holds court.

“You do it like him?’’ a customer asks from the other side of the counter.

Dowell-Young gets that a lot. He always has the same answer: “I do it the best I can.”