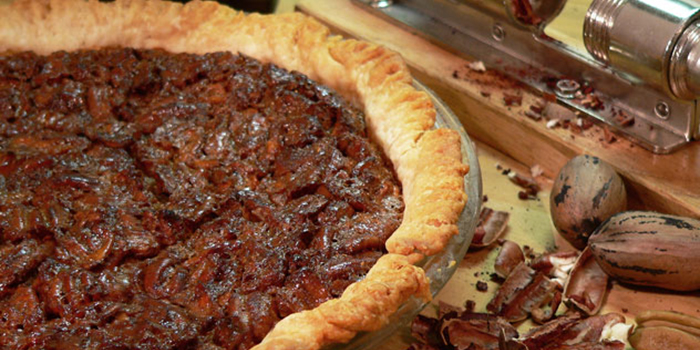 Here in the South, any church social, family gathering, or big holiday, will undoubtedly find a pecan pie somewhere on the table. More than likely, you’ll find several of them on the dessert table and in various configurations. Over the years, folks have taken the basic recipe and fancied it up with things like chocolate, molasses, honey, and even some of that devil juice stuff. There’s just all kinds of ways to make a pecan pie it seems.

Pick up any bottle of Karo Syrup® in the grocery store, and you’ll find the recipe for pecan pie on the back. No doubt, the company is well known for its contribution to making the pie, and most recipes use it as a major part. It’s been a favorite for ages, and I still remember those big cans of syrup sitting in mama’s Hoosier cabinet, right next to the flour bin. I still dream of having one of those cabinets, sitting next to a wood cook stove in a log cabin by a lake. One should never stop dreaming.

This particular recipe is adapted from the one included in the 1950 “Charleston Receipts” collection, published by the Junior League of Charleston. With thanks to our sister state, I like this recipe because it’s not as sweet as the one from the back of the Karo Syrup bottle. It still uses a little of the syrup, but most of the sweetness comes from brown sugar. And, it just intrigues me that it also calls for some corn meal. Couldn’t resist that. Traced back to around 1886, I suspect pecan pie will remain a favorite on Southern tables and elsewhere for a long time to come.

I do hope you’ll try at least once to make your own pie crust from scratch. But, either way, I think you’re really going to like this recipe. I’ll be looking to hear from you if you decide to try it. Ready to get some flour on your face? Alright then, let’s get cooking!

What you’ll need to make the pie 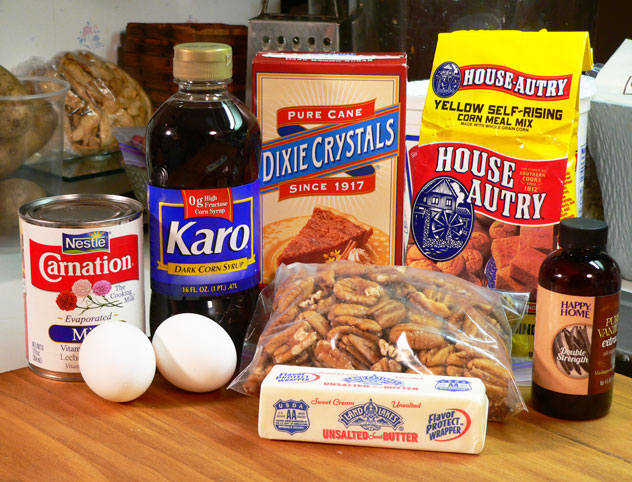 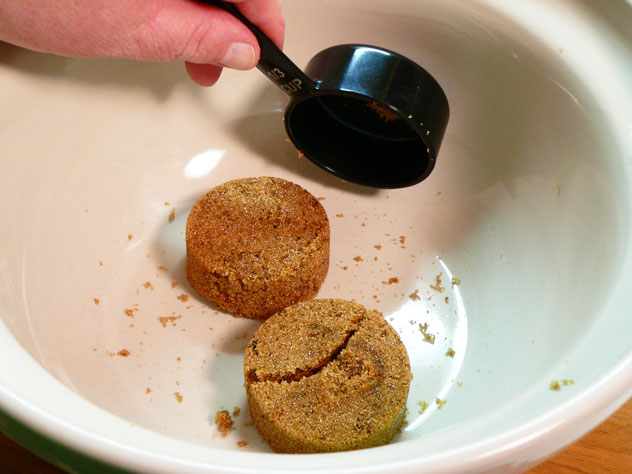 Let’s start by measuring out the brown sugar. Remember, you will need to pack the sugar down in your measuring cup to get the proper amount. Just add the sugar, press it down good, add more to fill your measuring cup, then place it in a large mixing bowl. photograph by Steve Gordon 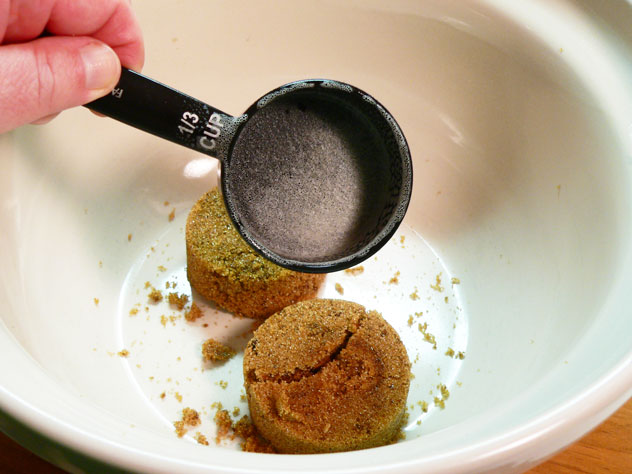 Here’s a quick tip for you. Spray the inside of your measuring cup with cooking spray before adding the next ingredient. It will make it much easier to clean up afterwards. Let’s see why. photograph by Steve Gordon 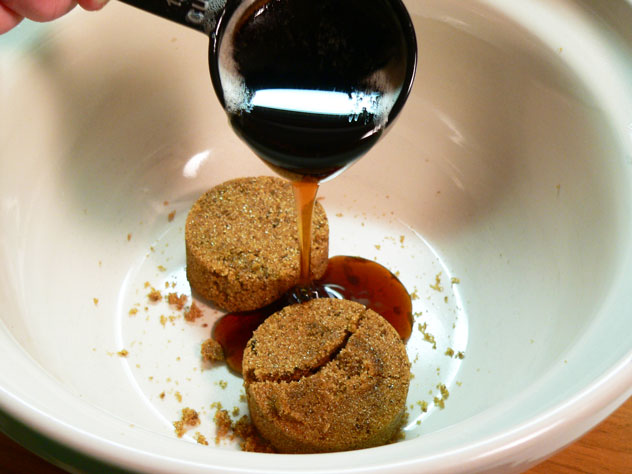 Measure out the Karo Corn Syrup in the measuring cup, after you’ve sprayed it with the cooking spray. This will help the syrup to release and make it much easier to clean the cup. Cool huh? photograph by Steve Gordon 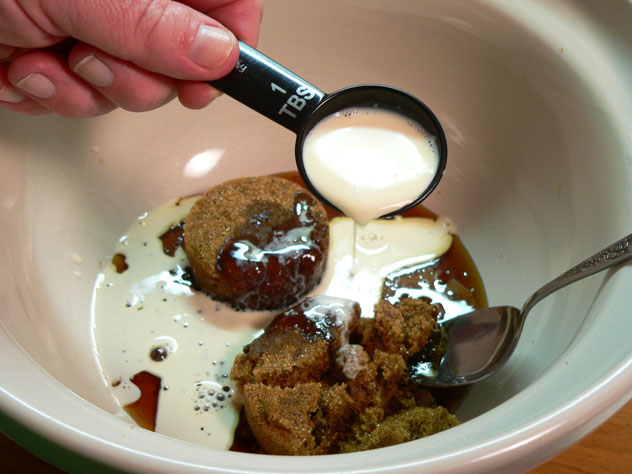 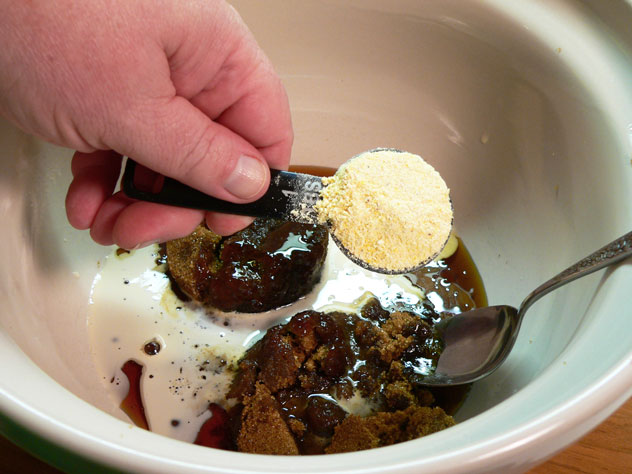 Add the corn meal. This will help thicken it all up. photograph by Steve Gordon 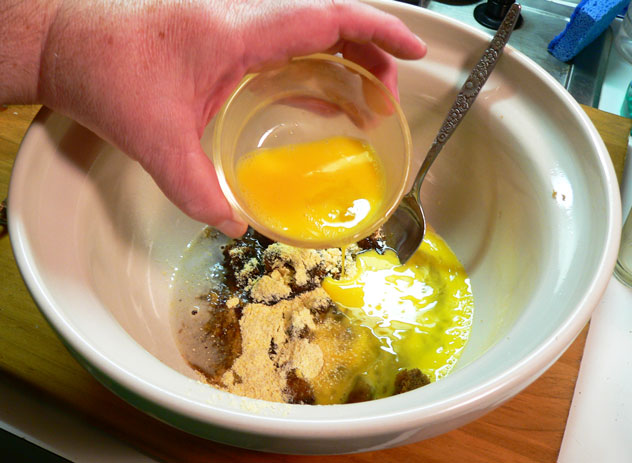 Break the eggs into a small bowl, then whisk them with a fork. Add those to the mixture. It’s always good to crack eggs into a separate dish, so you can easily find any egg shell that might have fallen in. You don’t want that in your pie filling. photograph by Steve Gordon 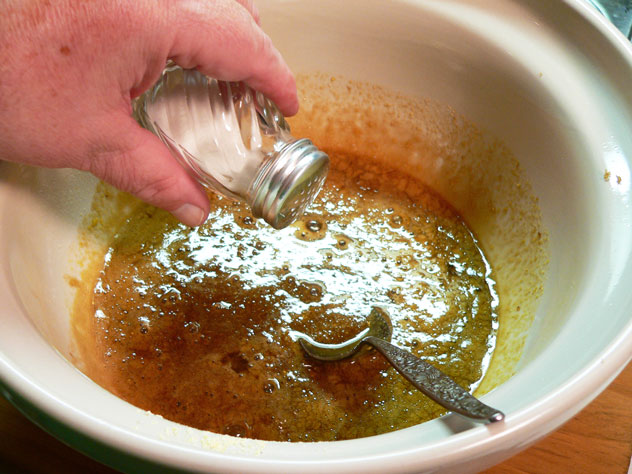 Now, add a dash of salt. Just a little will do. photograph by Steve Gordon 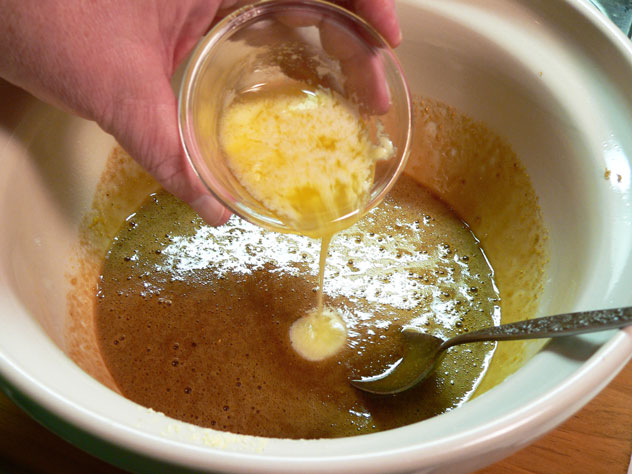 Add the melted butter. I like to place the butter in the microwave for just about 10 seconds. Very easy to melt it down that way. photograph by Steve Gordon 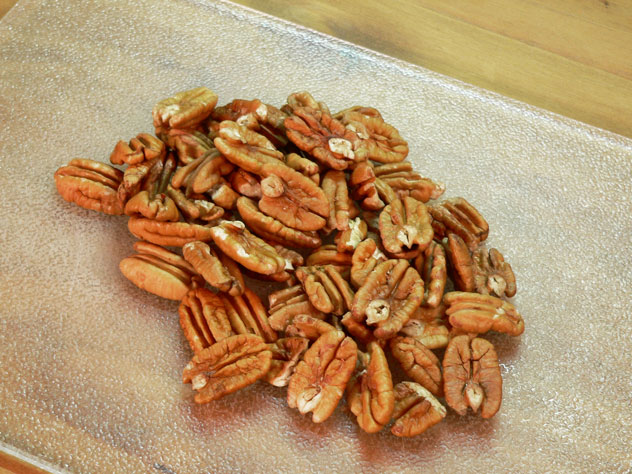 You could add whole pecans if you like, or you can add pecan pieces. I picked these up at the State Farmers Market in Raleigh just a few days ago. They’re fresh and local, unlike those you find in the big mart stores. Pecans just weren’t as plentiful this year as in the past. I paid $10.00 for a one pound bag this year, they were $9.00 last year. photograph by Steve Gordon 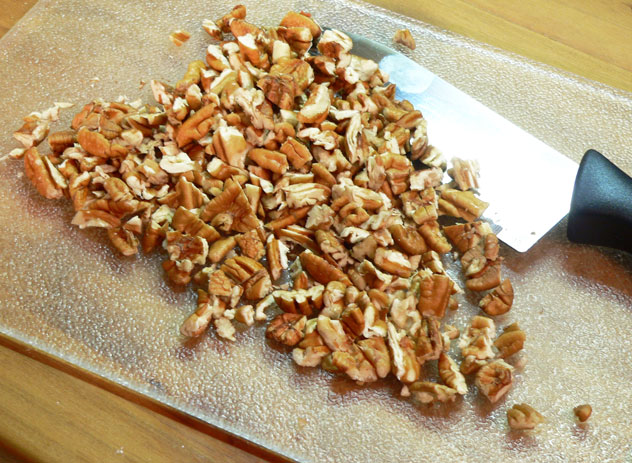 I decided to chop them up a bit. It’s just a personal preference, do whichever way you prefer. photograph by Steve Gordon 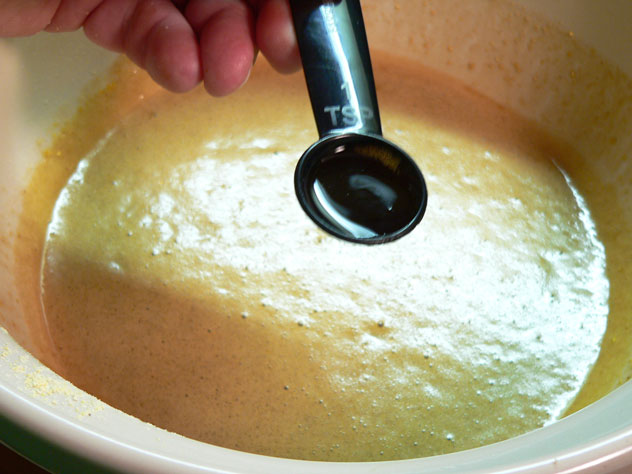 Add the vanilla extract. I prefer the Southern Flavoring Happy Home brand from up in Virginia. They’ve been around for a very long time and make some great flavorings. It’s been sold by churches as a fund raiser for years and they still do it today. You’ll find it available from some of the inside vendors at the State Farmers Market. photograph by Steve Gordon 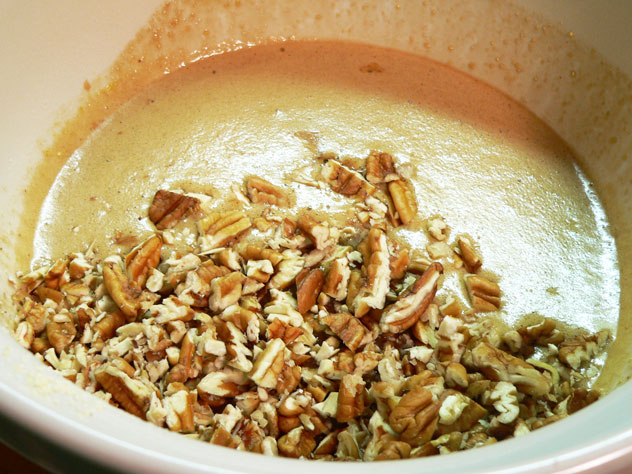 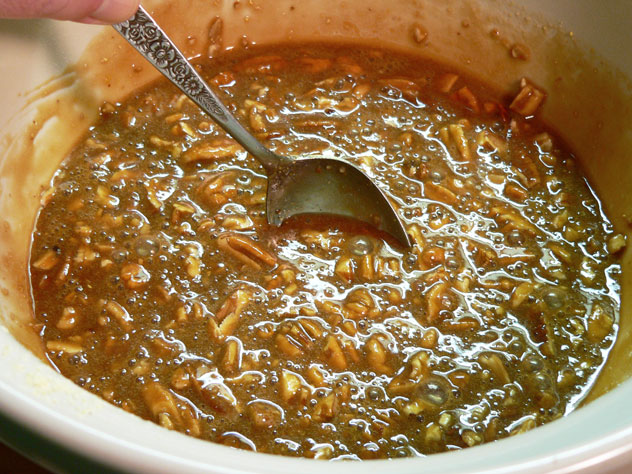 Stir everything up really good. photograph by Steve Gordon 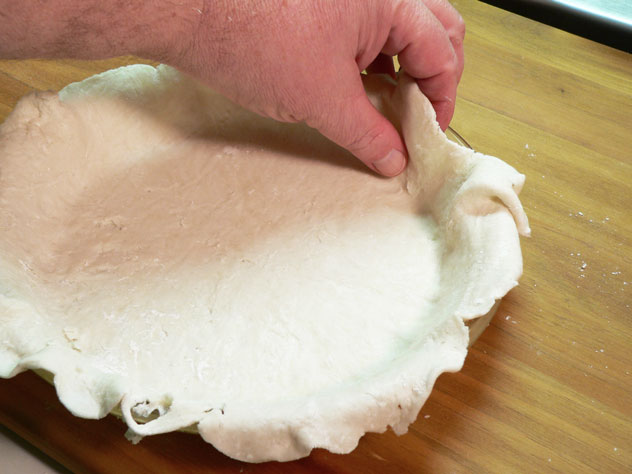 You’ll need to prepare your crust next. We’re using one made from scratch, but as mentioned, you could easily use a ready-made pie crust. We’ll use it as is, no pre-baking is needed. photograph by Steve Gordon 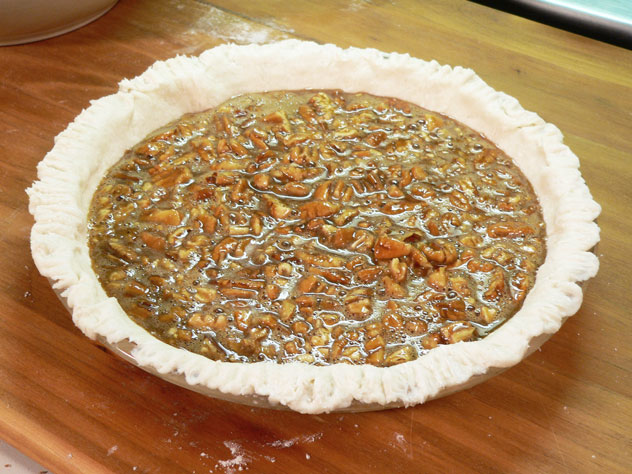 Add the filling to the pie crust. This is just enough for one 9 inch pie. photograph by Steve Gordon 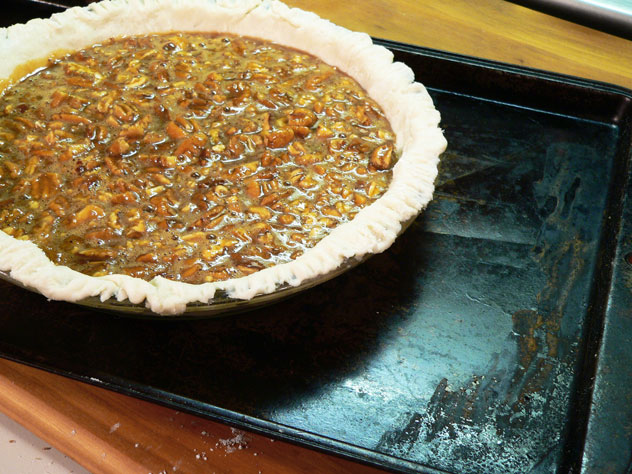 To be safe, place the filled pie on a baking sheet. This is in case the pie were to bubble over once it starts baking. Just makes cleanup quick and easy, and keeps you from having to scrub down the bottom of the oven for awhile. You can thank me later. photograph by Steve Gordon

Place the baking sheet, with the pie, in your oven that has been pre-heated to 350ºF. The pie will need to bake for about 35-45 minutes, or until it tests done. You will need to bake it until it reaches an internal temperature of 200ºF, or by testing it with a wooden toothpick. Place the toothpick in the center of the baked pie and pull it out. If the toothpick comes out clean, the pie is done. photograph by Steve Gordon 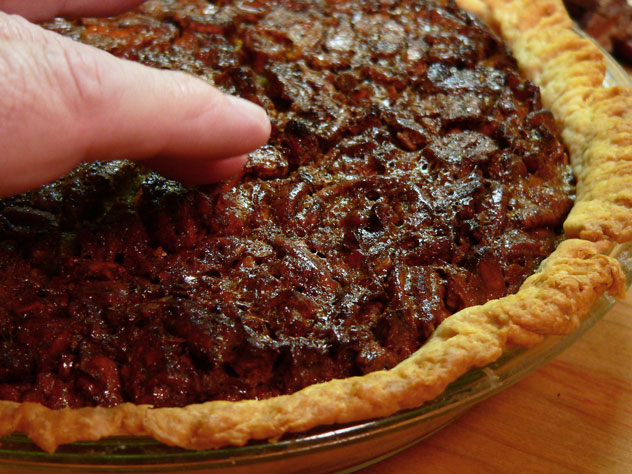 The center of the pie should spring back a bit when pressed in the middle. That is, if it’s done. When it’s fully baked, remove the pie from the oven and sit it on a wire cooling rack. photograph by Steve Gordon 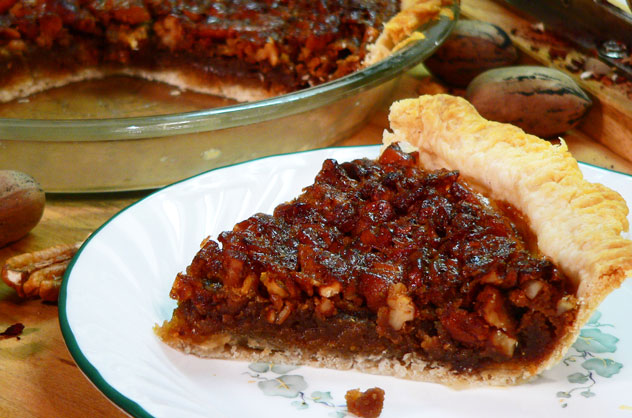 Let the pie cool completely, for about 3 hours, prior to slicing and serving. It firms up over time and should be easy to slice if given time. Because it uses less Karo syrup, it’s a bit more firm than most pecan pies. I do hope you’ll try it. photograph by Steve Gordon 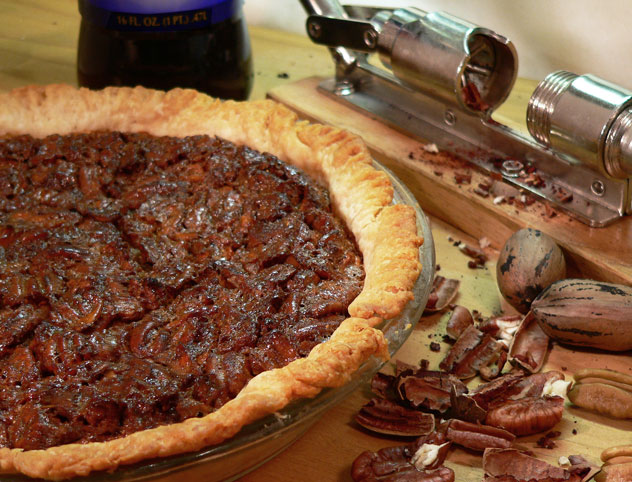 Steve Gordon is a writer, recipe tester, and lover of all things Southern. You can read more of his writing and step-by-step recipes at tasteofsouthern.com.