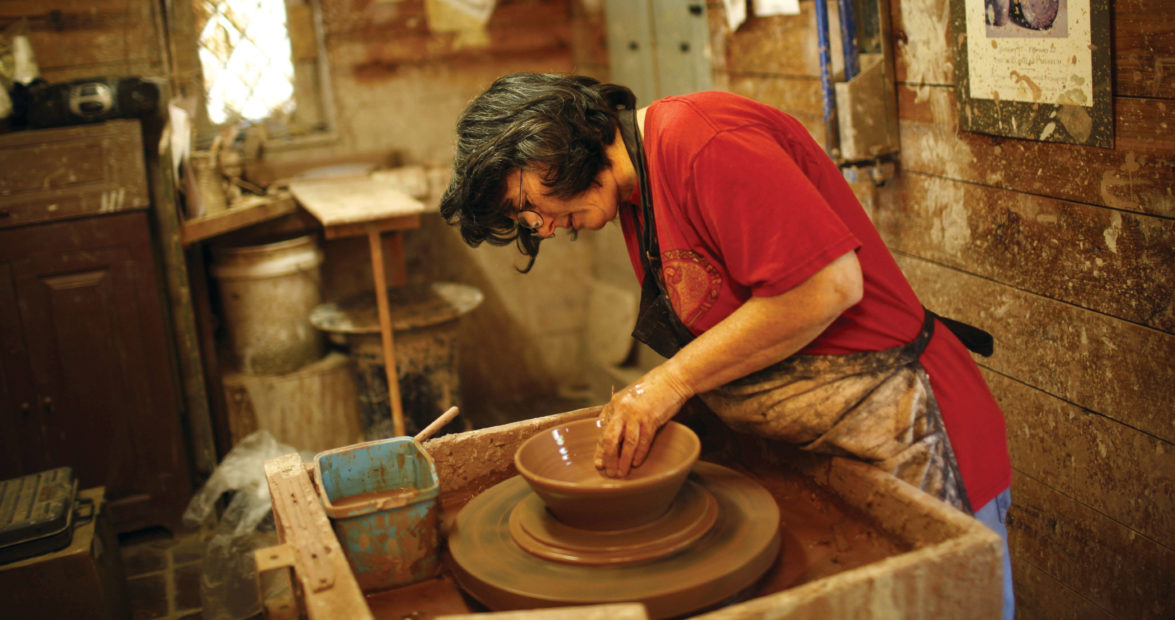 I never saw red clay growing up in southeastern North Carolina. Robeson County soil is sandy, not like the beaches where we vacationed every summer, but a far cry from dense red clay.

I was about 10 or 11, when I visited a family who lived on a farm — relatives, I think, although I can’t recall for sure who they were or where they lived. But it was the first time red mud clung like glue to the soles of my shoes.

What I remember vividly is that it had rained, and the downpour had pooled in bare places between the farmhouse and the barn and the fields and the pigsty. They didn’t have grass in the yard like we did in town. Their “yard” was red muck. Someone had laid boards here and there and scattered straw in a few places to make walking easier. I’d never seen the like. They didn’t seem to notice.

From that weekend until I moved to Randolph County in my early 20s, I equated red mud with farms, slogging through mire to slop hogs and leaving shoes at the back door so you wouldn’t track red footprints on the floor.

Red clay, which owes its hue to iron, left an imprint in my mind. But it didn’t permeate my being, not like I figure it colored the lives of the farm family I visited. And not like it helped shape the life of my current neighbor, a fellow named John Brooks.

When Brooks was a boy in rural Randolph County, red clay touched him at almost every turn. “We stayed in the dirt about all the time,” he says.

He helped his daddy plow red clay fields to plant the cotton and soybeans and such that sustained them. He walked to school along the unpaved road that sliced between forest and fields in the countryside between the mill communities of Ramseur and Coleridge, sticking to the edges so he didn’t get covered in dust when it was dry or red soup when it was wet. And when the chores were done, he and his brothers and other boys would strike up a game of baseball in a field.

“We called it cow pasture ball, running through cow turds and all that,” he says. “Back then, you didn’t have no amusement. You had to make your own amusement. It was some tough sleddin’ in those days, I swear it was.”

Later, he would take his skills to honest-to-goodness baseball diamonds in towns across the state, with green grass and dirt base paths of red or yellow or brown. His talents on the field landed him a job in a textile mill. He was hired to operate a machine that knit ladies’ hose during the days, and to pitch for the factory team on the side, challenging other mill teams for league bragging rights.

But before that, Brooks’s daddy died. John was just 14, the second oldest of six children. He wanted to stay in school. But working on the farm and their small dairy, milking a handful of cows by hand, left little time for tending to studies. He dropped out in the 10th grade to go to work so he could feed his mama and five brothers and sisters.

They raised almost everything they needed to survive.

“We didn’t know hardly what money was,” he says. “You better believe you had a job all the time. ’Bout every young’un had certain chores they had to do to keep things going.”
When the dirt soiled their clothes, they had no fancy automatic machines to wash them. John’s mama boiled meat scraps and lye until the “juice” was gone. When the mixture cooled, she cut it, like biscuits, into cakes of soap. Then the work began. “You had to scrub the clothes on a dadburn scrub board,” he says.

Eventually, his mama sold the family farm, and Brooks left the farming life behind. But he’s always had a garden at his home — and often an even larger plot somewhere out in the country — for a couple of reasons: Fresh food is better than store-bought; and it’s in his blood.

But this year, he didn’t plant a garden on the slope of reddish clay that is his backyard in Ramseur, a place where he’s grown corn and beans and tomatoes and more for at least 35 years. It’s not because he’s tired of urging seeds to sprout and sprouts to grow from a spectrum of clay. It’s because his knees are worn out after 90 years of walking — and working — this red land.

If Brooks is a measuring stick, red clay grows good people, too. Like Brooks, generations of other good, hard-working inhabitants of central North Carolina have reckoned with the red land. What doesn’t kill us makes us stronger, or so the saying goes. It might also make us smarter — or more creative. A handful of industrious souls found a different way to master red clay: Potters shape it to their will.

Venture into the working sheds out behind Owens Pottery on Busbee Road in rural Moore County, where the floors are dirt and everything is decorated with dust, and you’ll see how it was done. Here, the business of making pottery is accomplished the old-fashioned way, says Boyd Owens. His grandfather, James H. Owen (Owen’s son, M.L., apparently added the “s” to the family name), established the operation on this spot in 1895, making it the oldest pottery shop in the Tar Heel state.

Most modern-day potters buy their clay in bags of powder, like large sacks of flour, and they mix it with water to make their working clay. Boyd and some of his kin at nearby Jugtown Pottery don’t do it that way. A couple or three times a year, they travel to secret spots to dig tons of red clay out of the ground, from about two feet beneath the topsoil, and haul it home. Some of the clay is dug within 10 miles of the pottery shop. They harvest it in Randolph, Moore, and Lee counties; they know of a sweet spot of clay down in South Carolina. Boyd Owens’s daddy, M.L. Owens, located most of those clay caches.

“My daddy went out prospecting for clay all the time. If he was out on the road, he was probably out looking for clay. Basically, we still use the clays he found.”M.L. also developed, circa 1945, a signature red Owens glaze. The red clay makes the red glaze redder. “There’s something about that red body of clay that gives it depth,” he says. “We like for it to have a deep scarlet look to it.”

To prepare the native red soil for turning on a potter’s wheel, it’s spread for drying in piles a few inches thick, then, weeks, maybe months, later, it’s run through a hammermill, an hours-long job that slowly pulverizes the clay. An engine on an old Super C Farmall tractor powers the hammermill. They’ve tried rigging up other motors, but “dust gets the best of the engines,” Owens says.

The powder is mixed in a pug mill, which produces thick, bologna-sized sticks of clay. After it’s processed in a de-airing machine, it’s ready for the potter’s wheel. “It’s usually a pretty good turning clay,” Owens says, “and probably not as refined as what you’d buy from a company.”

That’s why, he says, most potters purchase powdered clay. They can count on store-bought clay being consistent. There’s another thing: Doing it the old-fashioned way is work.

“It’s truly a dirty, physical job, messing with clay,” Owens says. “But at the end of the day, it’s a pretty good, feel-good job.”

Down the road a short ways from Owens Pottery, you’ll find Westmoore Pottery, where the husband-and-wife team of David and Mary Farrell have been working for more than 30 years. Their focus is producing wares with the look and feel of pottery from the 17th, 18th, and 19th centuries — plates and cups and bowls and muffin pans and more that are made to be used. They have supplied replica pottery for such period films as Amistad and Cold Mountain.

Before 1800, Mary Farrell says, almost all of the pottery produced in the area was made from red clay. It was available and quick: “They’d just use clay dug from the ground, and that was it.” Consequently, she says, you can find rocks bulging from the sides of some pottery.

“I think one reason I like the red clay,” she says, “is that in the past so many things were made out of it. It’s a little bit finicky, particularly if you don’t use any lead, [and] it’s kind of hard to find a glaze that works.”

They also have a clay pit nearby. David and one of their sons chiseled the hole in the ground a shovelful at a time. The lad was not taken with pot-making, but he loved to dig. For his part, David made red clay tiles and fired them in a kiln. He’s replacing the wooden shingles on the pottery shop with the red rectangles. Along the roof ridge, he laid red pottery jugs sliced in half lengthwise. He expects the tiles to last as long as the shop and jokingly says he hopes the framework will support the weight. Really, he’s confident that it will: He made it, too.

Mary Farrell says visitors to Westmoore Pottery occasionally ask what they use to make the pottery. When told that it is clay, some reply that it looks like dirt. Well, it is dirt.

“You don’t even think of it as clay or dirt,” she says, “even though it is dirt. If you’re gardening, you have more of a sense of, gosh, I’m really dirty. When you get your hands in it [on the wheel], you don’t think that you’re sticking your hands in dirt. You’re thinking more about what it’s going to become.”

What is the red clay going to become?

That, of course, depends on whose hands are tilling it — or turning it — and how hard those hands work.