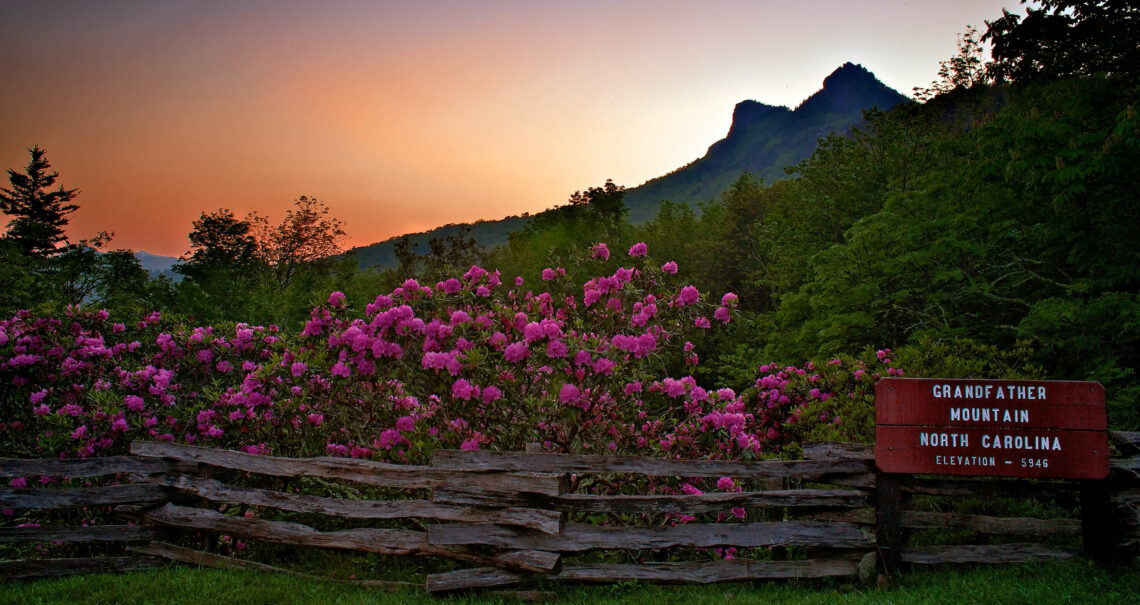 Grandfather Mountain’s Mile High Swinging Bridge offers dramatic, 360-degree views of the surrounding Blue Ridge Mountains. But on the far side of the bridge, atop a ridgeline of craggy boulders, a little puddle steals the show.

There, Lauren Farrell is leading a Peaks and Profiles talk for park visitors who’ve come to check out the view at Linville Peak. Instead of looking out over the mountains, the guests are all heads-down, captivated by an army of Cope’s Gray treefrog tadpoles darting and gliding through this shallow pool of water, only about three feet in diameter. A few children, down on all fours, peer into the water and count the tadpoles. “That one has legs!” one of them shouts.

“I think that’s the coolest thing in the world,” laughs Farrell, who adds that the park’s educators have learned how to say “tadpole” in several different languages. “We’re standing on a mountain peak and no one’s even looking!” 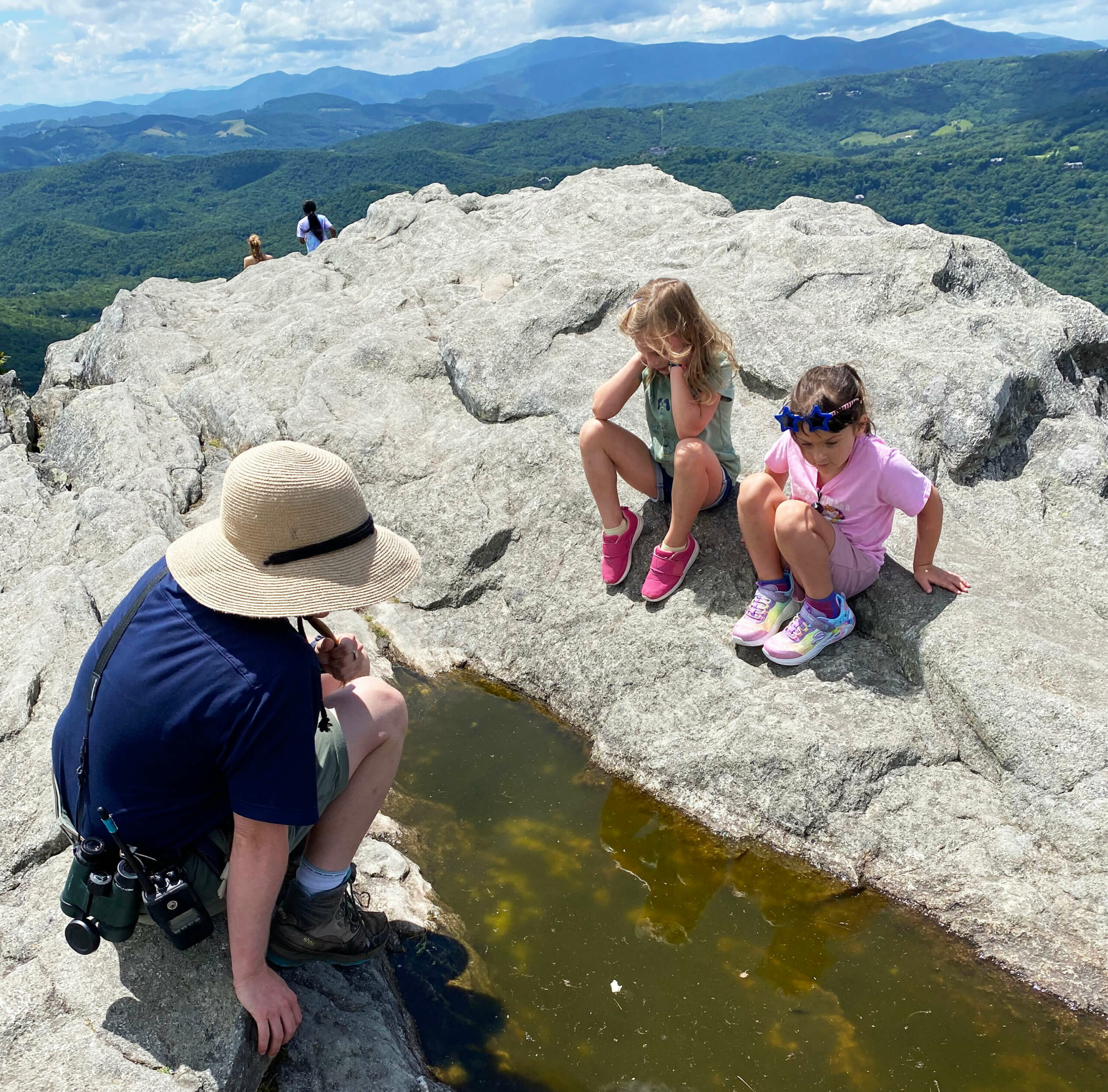 A pool of water at Linville Peak steals the show. photograph by Landis Taylor

Grandfather Mountain’s daily programs and interactive exhibits help its naturalists tap into guests’ natural curiosity and interest, showing them why, with 16 distinct ecological communities and 72 rare or endangered species, the park is one of the East’s most diverse destinations.

At more than a mile above sea level, Grandfather Mountain offers visitors a unique vantage point to the natural world, with majestic views of the North Carolina High Country, the Mile High Swinging Bridge, wildlife habitats, hiking trails, and more. 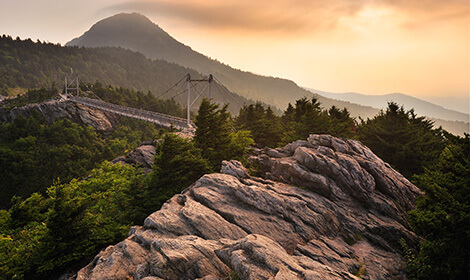 Grandfather Mountain got its name from early settlers who thought the cliffs looked like the face of an old man. But the original name of the mountain was Tanawha, a Cherokee word that means “a fabulous hawk or eagle.”

When Farrell and the other naturalists at Grandfather Mountain talk to visitors during the Peaks and Profiles program, held every day at 1 and 3 p.m. April through October by the footbridge, their goal is to share a little about the park’s history, fauna, and flora.

Like the Blue Ridge goldenrod, for example, a small perennial herb with golden-yellow flowers that grows in only three places in the world. The plant adapted to live on Grandfather Mountain’s high, rocky peaks. “They can live under high winds, extreme low temperatures, a lot of ice, not a lot of soil, and open, sunny exposures,” Farrell says. “If you could choose where you wanted to be a plant, this is not where you would choose. Life is hard.”

Farrell points to the trees as proof, showing guests how, thanks to the mountain’s strong winds, half of each tree is devoid of branches. 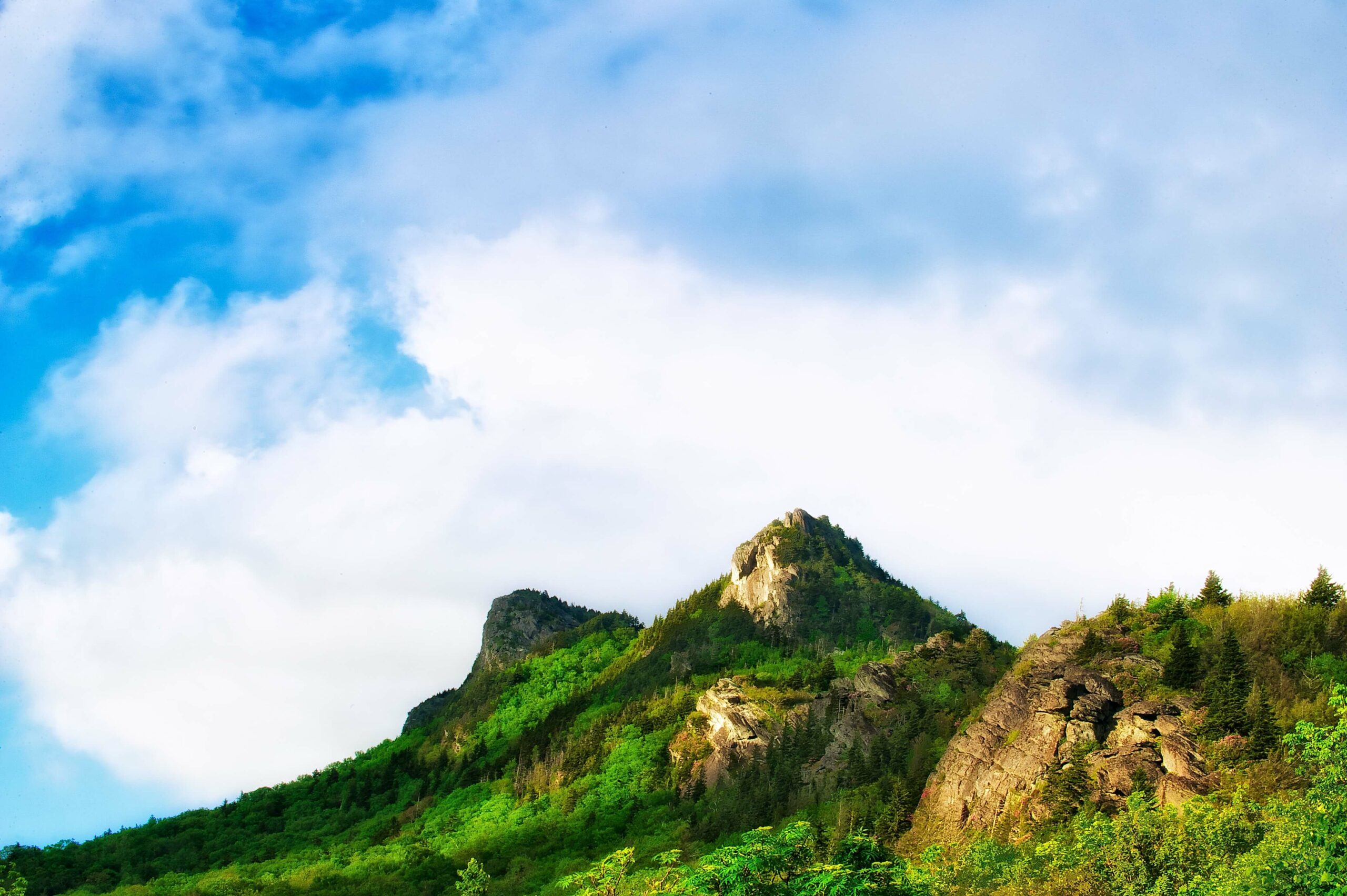 In Grandfather Mountain’s Peaks and Profiles program, you can learn a little about the park’s history, fauna, and flora. photograph by Skip Sickler

The same rocky peaks that leave the mountain’s trees vulnerable to winter’s harsh winds generate strong thermal uplifts, perfect for hawks flying south for the winter. Farrell explains to the group that the broad-winged hawks migrate in kettles of hundreds or thousands, earning Grandfather Mountain its designation as an official Hawk Watch site by the Hawk Migration Association of North America.

Throughout September, Grandfather Mountain’s Hawk Watch event welcomes visitors to view these birds of prey as they swirl and spiral overhead, on their way to South America.

Home to bears, river otters, elk, cougars, and bald eagles, Grandfather Mountain gives its guests a chance to see these animals up close and personal every half hour from 11 a.m. to 4 p.m. during its Animal Encounter activities.

The animals live in native habitats with viewing areas that allow guests to get within a few feet of animals as they engage in “enrichment” activities, like eating a snack, or getting a new toy.

“Today, these bears — and all the animal habitats — are basically here because of Mildred,” explains Corey White, an instructor and naturalist at Grandfather.

In 1968, Mildred was one of two black bears that Hugh Morton — a photographer, conservationist, and founder of the Grandfather Mountain nature park — brought to the mountain from the Atlanta Zoo. The idea was that Mildred and her male partner would breed as a wild-release breeding pair. When the male bear’s cage was opened, he ran off. But Mildred stuck around, befriending the gift shop staff and Morton, who would take the bear on nature walks and picnics with Fig Newtons and orange juice. “Morton later learned that the staff at the Atlanta Zoo had domesticated Mildred when they fed her during their lunch break,” says White.

Eventually, Morton built a two-acre enclosure for Mildred to keep her safe from visitors or locals who didn’t know Mildred’s history. “She was the first animal we built an enclosure for, and we’ve been adding other and different animals ever since,” White says.

Today, all the habitat animals living at Grandfather are there because of circumstances that keep them from being able to survive on their own in the wild. 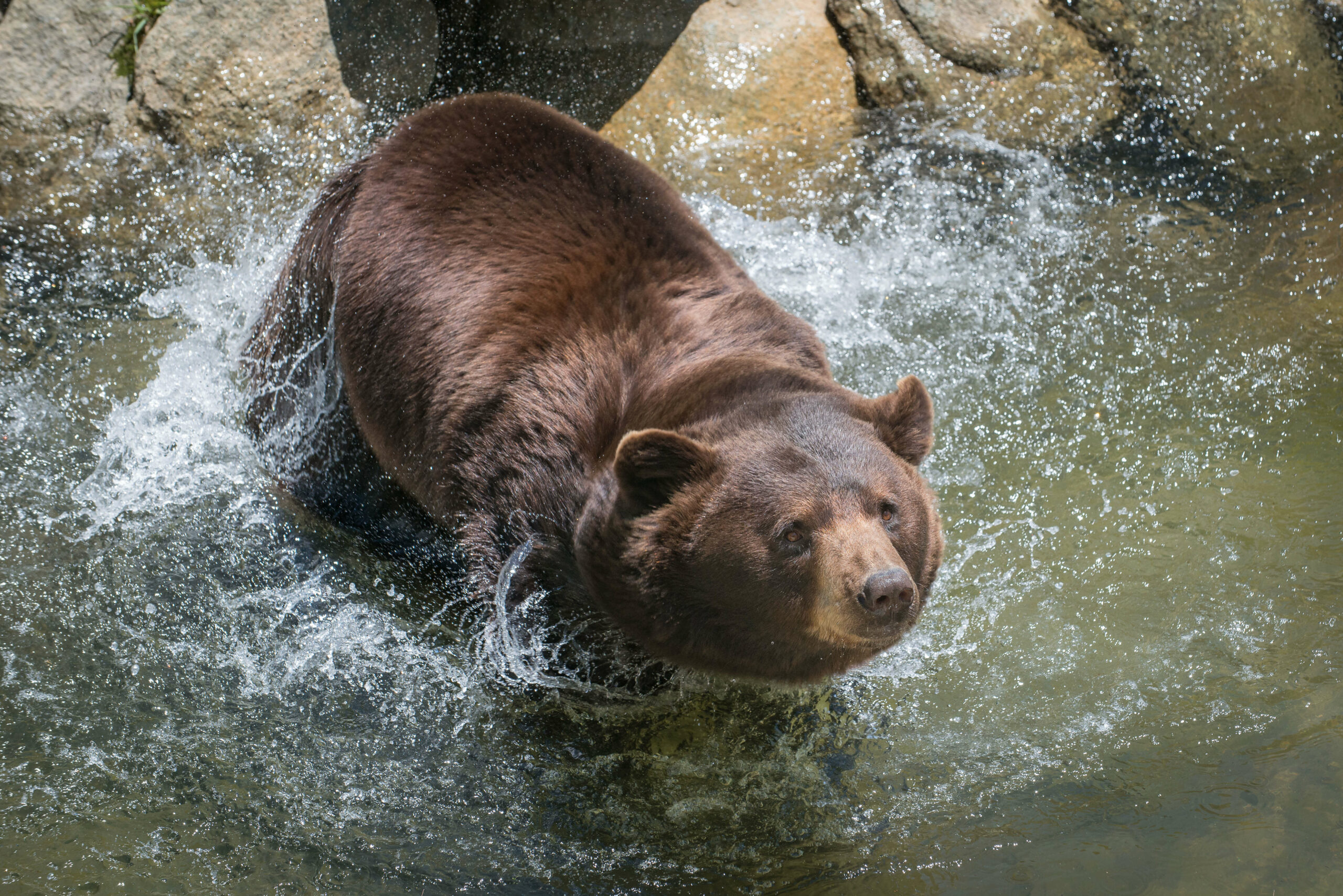 Rounding the corner from the animal exhibits, children find the Junior Nationalist table Fridays and Saturdays at 11:30 a.m.

Volunteer Stewart Gray, a retired research professor and plant pathologist from Cornell University, invites two brothers to pick up one of the magnifying glasses at his table to take a closer look at a witch hazel branch he’s selected for examination. “See the little, tiny white guy?” Gray asks. “That’s a larva of a goldenrod gall fly. He’s going to stay there all summer, fall, and winter to protect itself from freezing, and in the springtime, it will come out and start the life cycle all over again.”

Very cool, the boys agree, as they pick up a second branch and inspect it closely with their magnifying glass. Gray tells them where they can look in the park to find more witch hazel, and in their hometown of Raleigh.

“Some kids get really into it,” Gray says, as the boys run off. “I do all kinds of programs about pollinators and plants. I want to get kids interested in science. There’s so much interesting biology around here, you just have to look for it — walk around, turn things over, and see what you can find.” 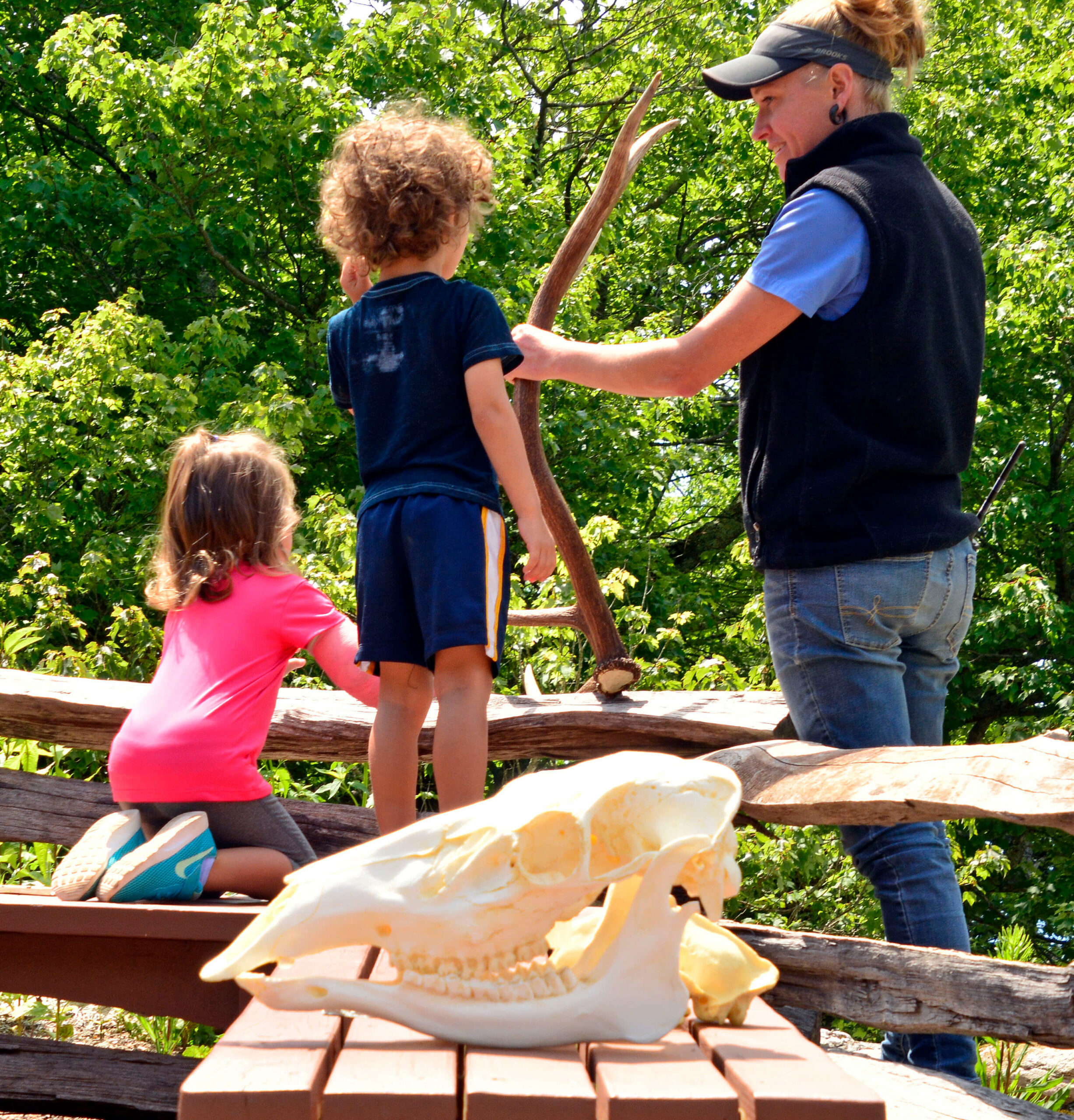 Children can learn from all kinds of programs at Grandfather Mountain. photograph by Victoria Darlington

“We have visitors who are avid birders and botanists,” says Farrell. “But we also have people who are into hiking and think plants are cool, but maybe they’re not that interested in the fauna.” Sometimes, she thinks the people who come to Grandfather Mountain because it’s a touristy thing to do — not necessarily because they want to learn about nature — can be the most rewarding guests.

“I love it when you get that ah-ha moment,” she says. “These daily programs and talks are so important because we can spark people’s interest in something they may not even know they wanted to learn about. We can get them started, and then they’ll come back for more.”

Find the natural wonders that await you at Grandfather Mountain. Plan your visit today at grandfather.com.