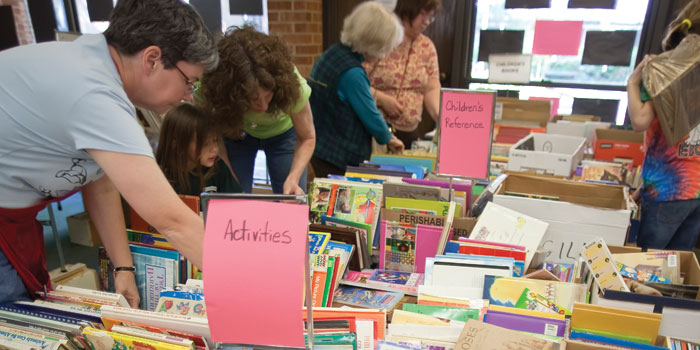 They begin arriving before daybreak, the wise ones with a chair, a cup of coffee, and a good read to help pass the time. By 10 a.m., when the doors fly open for the first day of the annual book sale at St. Francis Episcopal Church in Greensboro, the line of loyal patrons winds around the church.

“Before I was a father, when I was allowed to, I used to camp out there and would be among the first people in,” says Jim Langer, a Greensboro College art professor. Since he began attending the sale 20 years ago, Langer has developed a strategy.

“If there’s anything the first day that I have a pretty good sense is going to get scooped up, I try to nail it quick,” Langer says. Then he returns on the final day of the sale, when shoppers stuff as many books as possible into a grocery bag for just $8. Proceeds from the sale benefit local charities.

A small army of volunteers awaits that first-day swarm. In the parking lot, they direct the steady stream of traffic and offer apologies to those kept waiting. Near the entrance, they serve lemonade and cookies. Inside, they scurry from room to room keeping dozens of tables well stocked and presentable. At the exit, they man cashier stations and help shoppers haul bagfuls of books to their cars. There are even volunteers to make sure the volunteers don’t go hungry.

For another group of dedicated volunteers known as the Steadfast Sorters, the work begins long before opening day. Almost every Wednesday and Saturday throughout the year, they report to a garage on the church grounds, where piles of donated books are stored.

“It’s 110 degrees in here in the summer and 30 degrees in the winter, and we’re still here,” says Darlene Ball, a chairwoman for the sale.

They pick up each book and place it in the appropriate box based on quality and content.

“Are we keeping this?” retired college professor Arnold Van Pelt asked during a sorting session last fall. He sounded skeptical while holding up a book titled The Hot Flash Club.

Into the paperback box it went.

Next up: Redneck Mothers, Good Ol’ Girls, and Other Southern Belles.

“Geez, there’s got to be a market for this,” Shafer said.

Into the nonfiction box it went.

The Steadfast Sorters often run across treasures, such as two Nicholas Sparks books signed by the author or a box set of Rudyard Kipling’s work.

Others wind up in the reject pile, including the occasional book deemed inappropriate for a church book sale.

“Sometimes you wonder, ‘Who bought that to start with?’ ” Ball says. “And then, ‘Who would have enough nerve to bring it over and drop it off here?’ ”

On opening day, the boxes of books, once stacked floor-to-ceiling in the garage, sit in orderly rows at the church, waiting for the customers lined up outside. Greensboro residents anticipate the sale, now in its 53rd year, from the time they see the announcement banner go up on Lawndale Drive.

More than 1,000 people showed up on opening day of last year’s three-day sale, which offered more than 70,000 books and netted about $59,000 for dozens of charities. In the past decade alone, the church has doled out about $500,000 to such groups as Habitat for Humanity, Horsepower Therapeutic Learning Center, and Stop Hunger Now.

“I think it’s a real alchemy, the transformation of books into compassion,” says The Rev. Michael Moulden, rector of St. Francis. “Ninety-eight percent of the proceeds go to support a very wide range of caring responses to the human condition.”

And all the books go to support readers’ interests.

Ellen Summers, who leads creative writing workshops in Greensboro, picked up a collector’s complete edition of Shakespeare and an anthology of Victorian poetry at last year’s sale. The former college professor was a first-timer.

“When I walked in the place, my jaw just dropped,” Summers says. “It really was a book-lover’s dream, like waking up in paradise.”

Betsi Robinson is an award-winning writer and editor who lives in Greensboro.