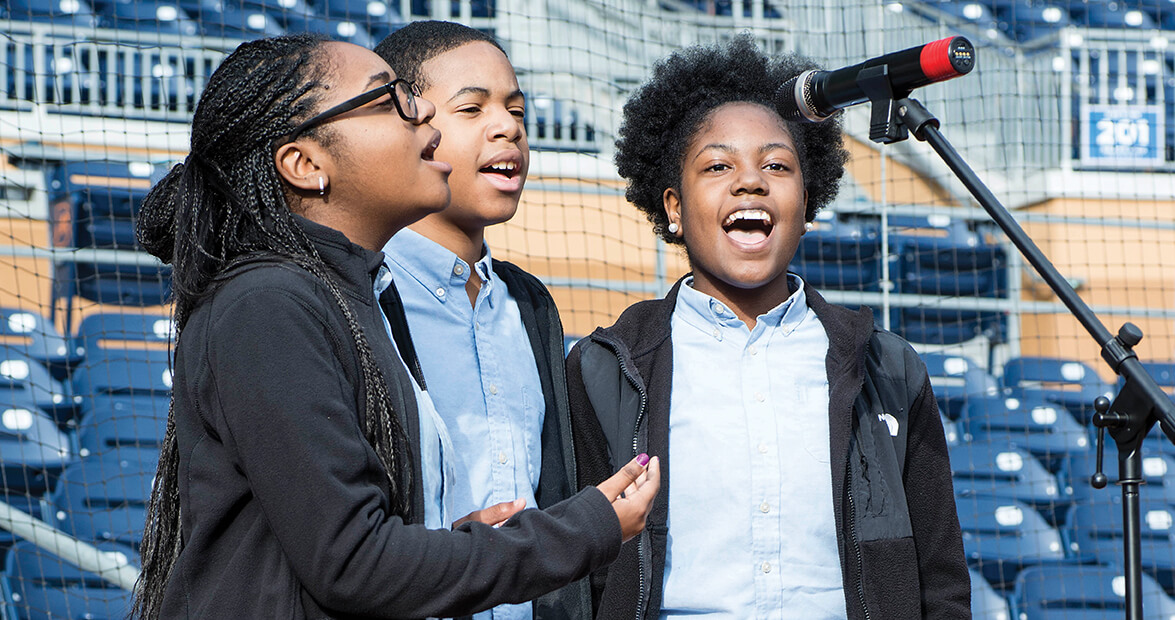 The young woman looks pale; her breathing is rapid. She bounces her right leg as if it were a jackhammer. Her hands flutter like hummingbird wings, and it’s difficult to read the number 28 on her audition sheet. An hour earlier, she and more than 150 other people had formed an anxious line that snaked down a stairway, turned left along Jackie Robinson Drive, and looped around the Durham Bulls Athletic Park. Many had arrived at dawn, in attire ranging from gussied up — a tween girl wearing a sleeveless, red-sparkled dress, a Webelos Scout in a crisp, tan uniform — to just rolled out of bed — a guy with shaggy salt-and-pepper hair in a paisley shirt and black Converse Chuck Taylors. Many carried water bottles; only one lugged an electric guitar.

Now, inside, facing center field and surrounded by 8,200 empty seats, a lone microphone awaits the start of the annual national anthem tryouts. For the next three-plus hours, the judges will listen to roughly 90 versions of “The Star-Spangled Banner” to decide which contestants will earn the honor of singing it at one of the Durham Bulls’ 72 home games. 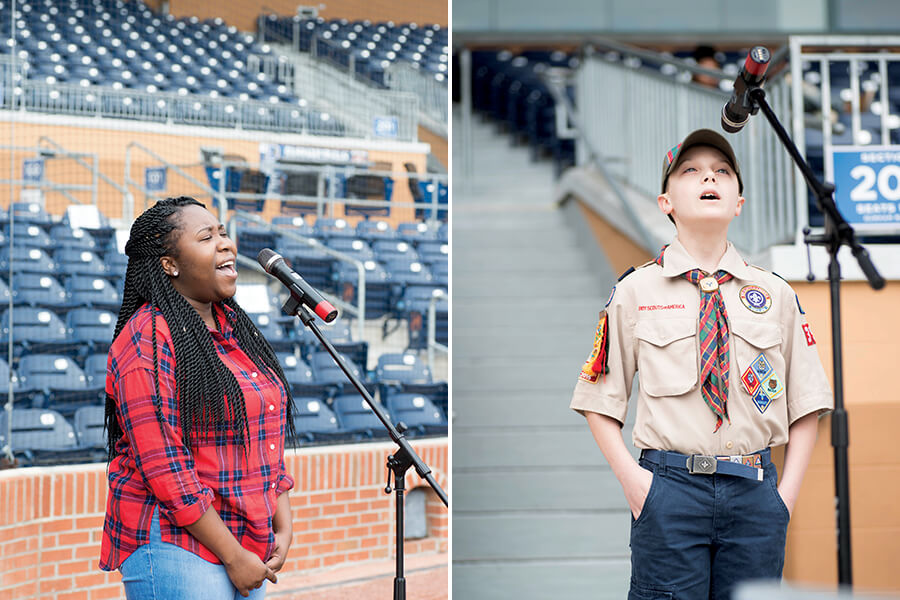 Kiera Brown sets the bar as the first contestant. Right: Webelos Scout Vinnie Rudzki is dressed for the occasion. photograph by Lissa Gotwals

With lyrics by Francis Scott Key and a melody derived from a traditional British drinking song, the anthem is notoriously difficult to sing. The modern arrangement demands a voice that can span 18 notes — an octave and a half. Sung a cappella, the anthem might sound acceptable in the shower, but dreadful in a stadium.

The first 10 contestants line up near the home team’s dugout.

O say can you see by the dawn’s early light …

Contestant No. 1, Kiera Brown, begins on pitch, and cruises through the two-minute song in a confident, full-throated soprano.

“I do love to sing,” she says breathlessly, after finishing. “I always let nerves get the best of me. But if I want to pursue music, I have to put myself out there.”

Contestant No. 4, a girl of about 10, covers her face, terrified. She stands far from the microphone, as if it were a cobra, and begins.

Above her, birds sing in the rafters of the upper deck. It’s so easy for them.

Tankard Cubed — Brittany, Joshua, and Ashley Tankard — break into a tight three-part harmony [seen in the feature image at the top of the page], wielding the same vocal prowess that propelled them to an appearance at the Apollo Theater in New York City.

Of Perry and Rona Tankard’s nine children — enough to field a baseball team — these three are the youngest. They are the family’s outfield.

Sung a cappella, the anthem might sound acceptable in the shower, but dreadful in a stadium.

The trio attends Mount Zion Christian Academy in Durham, and developed their singing skills in church. Rona has a bachelor’s degree in theology; Perry is an evangelical preacher. “They sing when I preach,” he says, handing out the group’s promotional materials.

Around the microphone stand three middle-aged women, each with short blonde hair, each wearing a simple gold cross necklace, each dressed in a navy blue T-shirt.

The first shirt reads: “I’m the oldest. I make the rules.”

The next: “I’m the middle. I’m the reason there are rules.”

The last: “I’m the youngest. The rules don’t apply.” 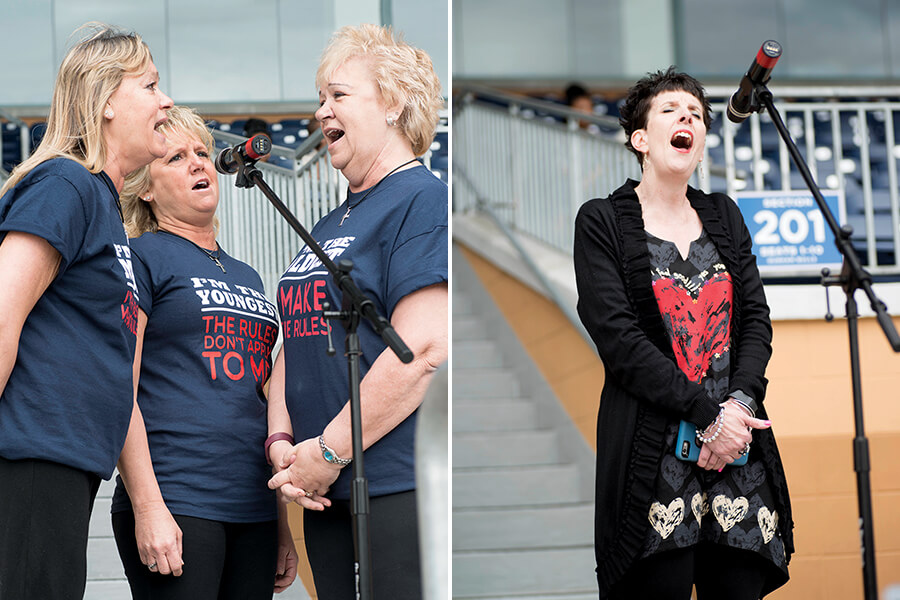 The Hinshaw Family is a gospel group from Bahama. Debbie, the oldest, is a tenor, followed by Sandy and Robin, who are both altos. Their harmonies are so interwoven that, together, they seem to sing as an entirely separate, fourth Hinshaw.

Their mother, Connie, also an alto, sings, but didn’t today.

“You raised these three?”

Connie rolls her eyes and smiles. Smiles in a way that says, “Yes, and don’t even get me started.”

Whose broad stripes and bright stars through the perilous fight,
O’er the ramparts we watch’d, were so gallantly streaming?

Because there’s a college baseball game later today, Contestant No. 19 has to sing over the noise of groundskeepers pounding together an aluminum batting cage.

Contestant No. 40, Brian Anderson, though, can drown out the sound of clanging metal. He plugs his raspberry-colored electric guitar into an amplifier, and plays the anthem like Jimi Hendrix did at Woodstock. Well, not exactly like Jimi Hendrix, but the notes are correct.

Contestant No. 41, Contestant No. 40’s intrepid daughter of about 6, is so short that even with the mic lowered, she still has to pull it toward her. Her voice sounds high and pure, and she can reach the top notes. After finishing, she leaps up and down, and hugs her father, who has packed away his guitar. 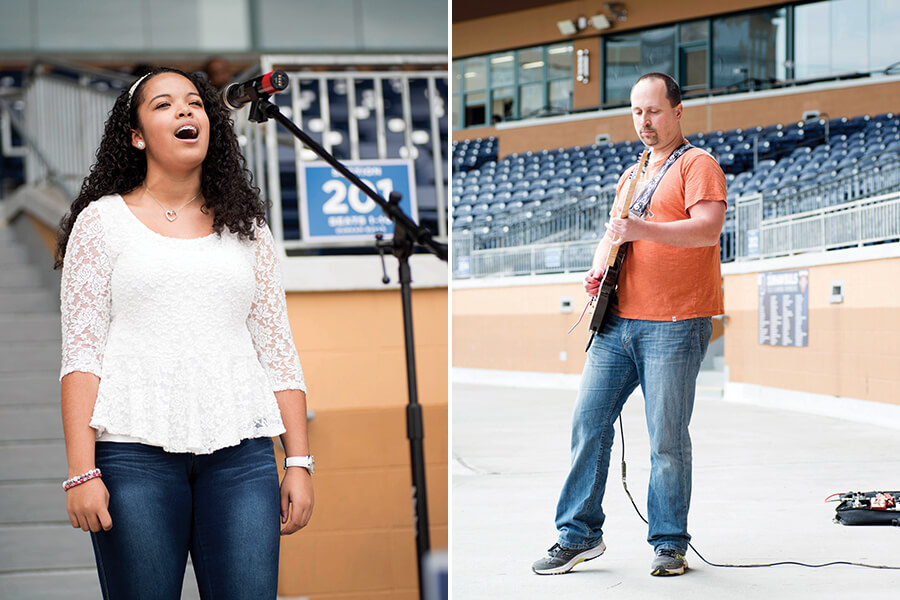 And the rockets’ red glare, the bombs bursting in air,
Gave proof through the night that our flag was still there …

Because a railroad track runs just two blocks away, Contestants Nos. 43 and 65 have to sing over the horn of a locomotive. Because a freeway runs by the stadium, Contestant No. 49, a middle-aged man with a soaring, operatic tenor that could shatter a wine glass, must sing over the siren of an ambulance. Contestant No. 55 stumbles over the word “glare.” Silence, and then muttering: “Oh, God.”

O say does that star-spangled banner yet wave …

Thirteen-year-old Grace Boudah, Contestant No. 68, is a veteran of the Durham Children’s Choir. Delicate, yet confident, her voice sounds like a mockingbird singing in a tree at sunrise.

O’er the land of the free and the home of the brave?

This is the line that breaks a singer’s heart. The first six words sweep an entire octave, low F to high F, landing on “free,” before stepping down, pirouetting on “home,” and then holding the note: “braaaaave.”

No. 4, the young girl with the pretty voice who has overcome her fear to get this far, can’t land the last note. Her father hugs her and leads her to the stands. Everyone cheers and claps. “You did a great job,” people in the crowd assure her. Because here, everyone is family. Everyone is brave.