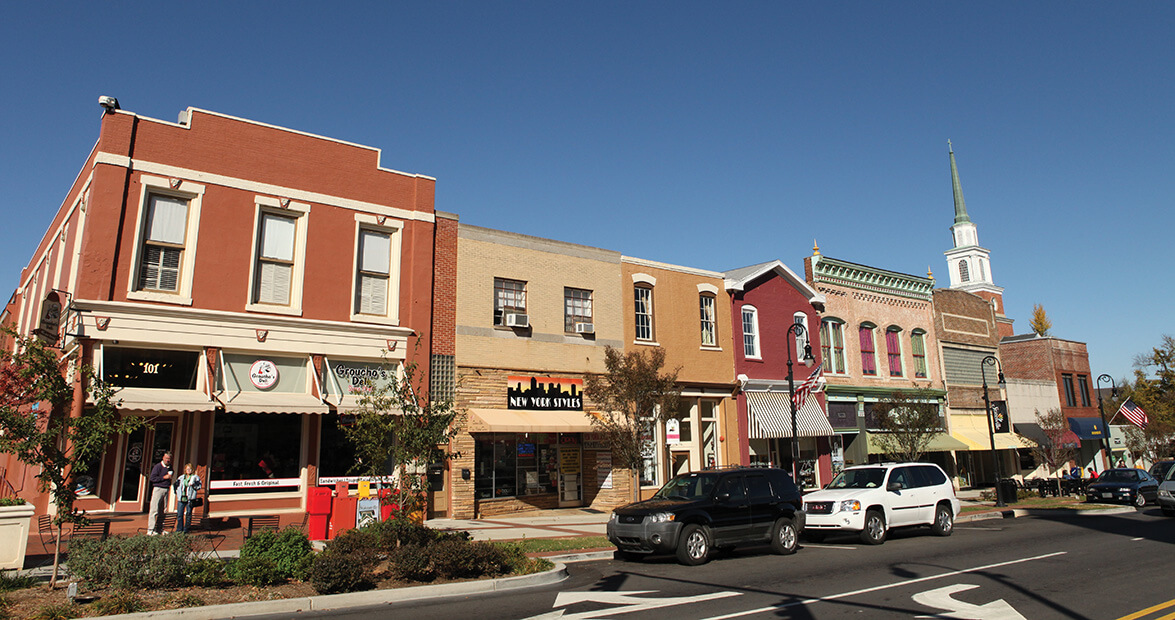 Statesville’s superhighways, interstates 40 and 77, are two great currents of semis, SUVs, and Buicks — some 70,000 vehicles a day — flowing in the four directions of the wind.

For most people behind a wheel, Statesville is just another name in white, reflective letters on green, reflective signs. For me, Statesville has long been a milepost, and a conveniently precise answer to are-we-there-yet questions while on the way to somewhere else. Driving west on I-40, it’s exactly 100 miles to Asheville. Driving east, I know I’m a good 40 miles from Winston-Salem. But on this trip, Statesville is the destination, a place that deserves to be stayed in longer than it takes to pay at the pump and down a combo meal.

Statesville beyond the interstate run-em-thrus is an unhurried place of historic neighborhoods with manicured yards and big trees, and a downtown where everything old feels fresh and new. In 2013 the city completed the first phase of its downtown streetscape project, which widened and prettified the sidewalks, turned crosswalks into brick, installed benches and tables and even rocking chairs, and decorated lampposts with banners that make this boast about the city: “Where It All Comes Together.” 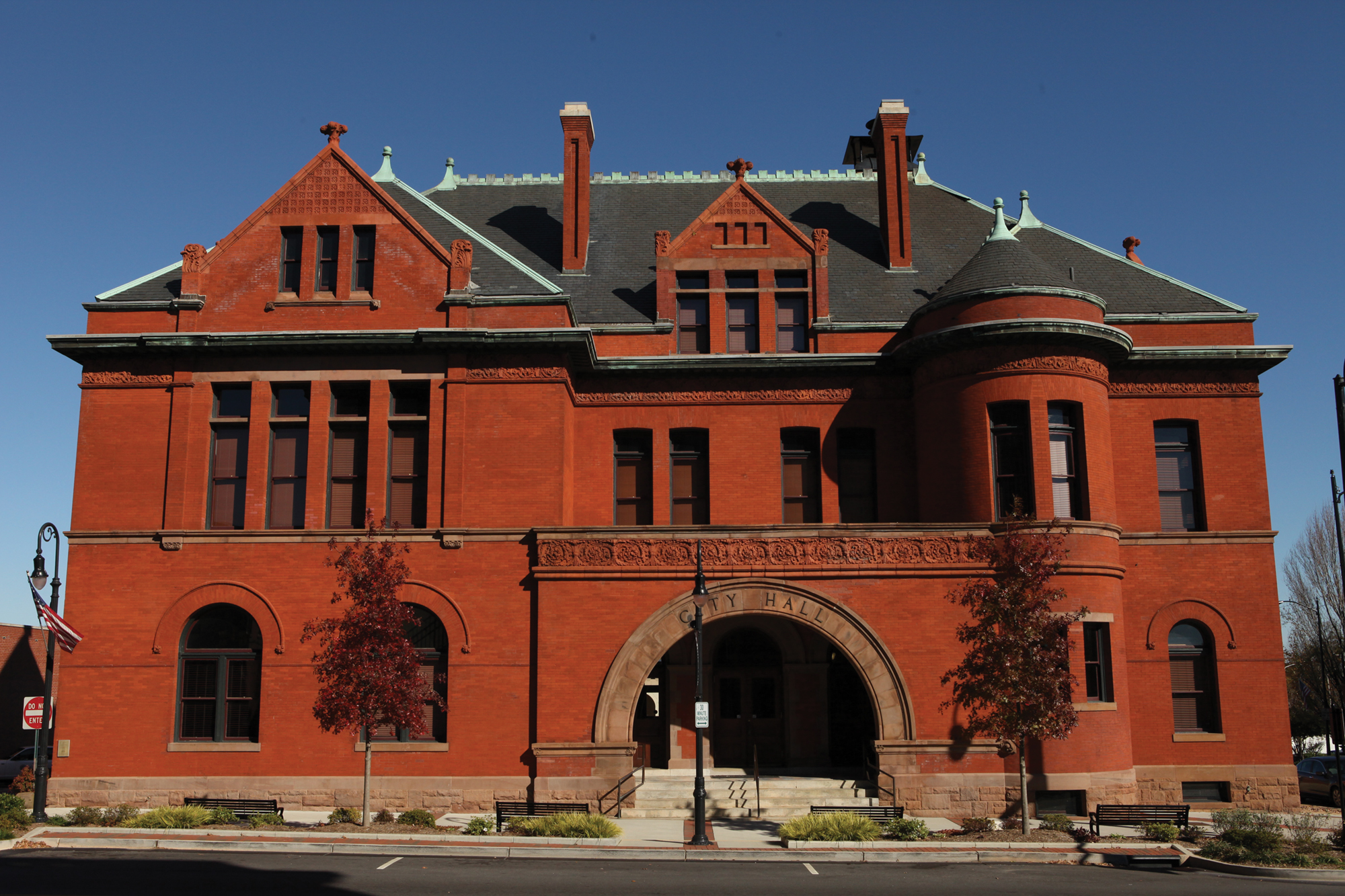 In downtown Statesville these days, you can dine on eggplant rollatini at the Mezzaluna II Ristorante Italiano, sample apple chutney at the 220 Café, buy cheese bread from a Colombian bakery, sip a glass of pinot noir while sitting at a sidewalk table at Wine Maestro, drink a frappé at HEbrews Coffee House, get a tattoo, buy a guitar, or stock up on jars of boysenberry jam at a nook called Your Southern Dreams.

First Flight Bicycles on South Center Street is one of the top 100 bike shops in the country, according to Bicycle magazine. It occupies space inside a former department store built in 1923. Sleek new mountain bikes with fat tires shine on the wooden floor, but this shop is as much a museum as it is a showroom. Up there on a ledge against the wall are bikes that backpedal through more than a century of cycling history.

“As far as we have been able to determine, we have the largest selection of vintage mountain bikes in the country,” says the owner, Jeff Archer, whose braided ponytail is graying with his 49 years. He’s originally from Ohio and has been in Statesville since 1989. He’s now chairman of the Downtown Statesville Development Corporation, a non-profit working to keep the city’s heart healthy.

He stands at his front door and looks across the street at one recent improvement: the American Renaissance Middle School, which converted a tired old storefront into something vital again. “It was really rewarding to watch,” Archer says. “It was an old J.C. Penney. It was an old eyesore and they really dressed that thing up.” Everything old so fresh and new. 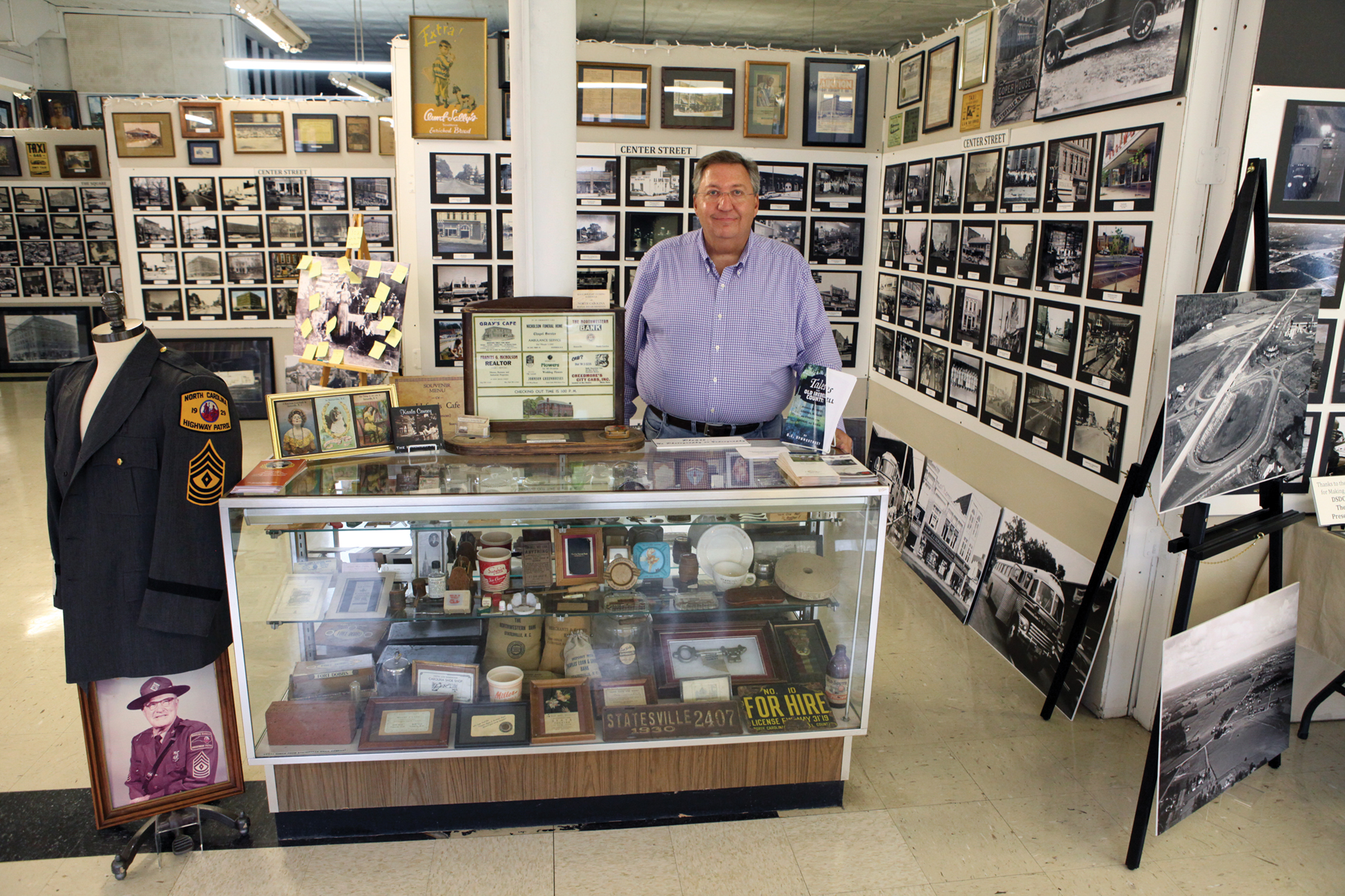 Steve Hill at the Statesville Historical Collection collects photos that show a glimpse of the town’s past. photograph by Brent Clark

His shop is right next door to the Statesville Historical Collection, a gallery of hundreds of mostly black-and-white photos and ads that depict Statesville through the generations. Steve Hill, a 59-year-old native son, retired assistant school superintendent, and devotee of Statesville history, owns all these photos. “I started collecting when I was a kid,” he says. “I started collecting everything related to my hometown. I had some great teachers in the public school system who sparked the interest of a young boy into following local history.”

Fifty years later, the interchange is under construction again. The excavators, bulldozers, and graders are back, turning the right-of-ways into a riot of red dirt. The original intersection is a cloverleaf, which slows traffic considerably with its circular on- and off-ramps. The new ramps, called “flyovers,” will arc over the travel lanes, allowing drivers to maintain highway speed. “So we have arrived!” Hill boasts with a smile. “Getting our own flyover! In little ol’ Statesville!”

The name “Statesville” predates the interstates by about 170 years, but from what state of mind did someone state that the name “Statesville” should stick? Historians have proffered their theories. One is that it was named for the State Road that passed through here from Salisbury to the mountains. Another theory — and it appears to be the most accepted one — is that at the time of its founding in 1789, the town was roughly in the middle of the state; North Carolina back then still included much of what would become eastern Tennessee. “It’s basically named after the state of North Carolina,” Hill says. “The village of the state.”

Whatever the name’s origin, Statesville will always be called home for Steve Hill, whose gallery is open on weekday afternoons. “It’s the perfect place in the universe — for me, anyway,” he says. “I think every community should have someone taking care of their local history, making sure it’s not lost, making sure it’s available for generations to come.”

The best barbecue around

The noon hour has come and gone. Nothing is in my stomach and barbecue is on my brain. My visit to Statesville has to include a meal — a big meal — at Carolina Bar-B-Q. So I turn left onto East Front Street, pass the handsome and historic brick-built City Hall, and head toward Salisbury Road. And there it is, with the tall, green roof and big, white letters spelling out “Carolina Bar-B-Q.” 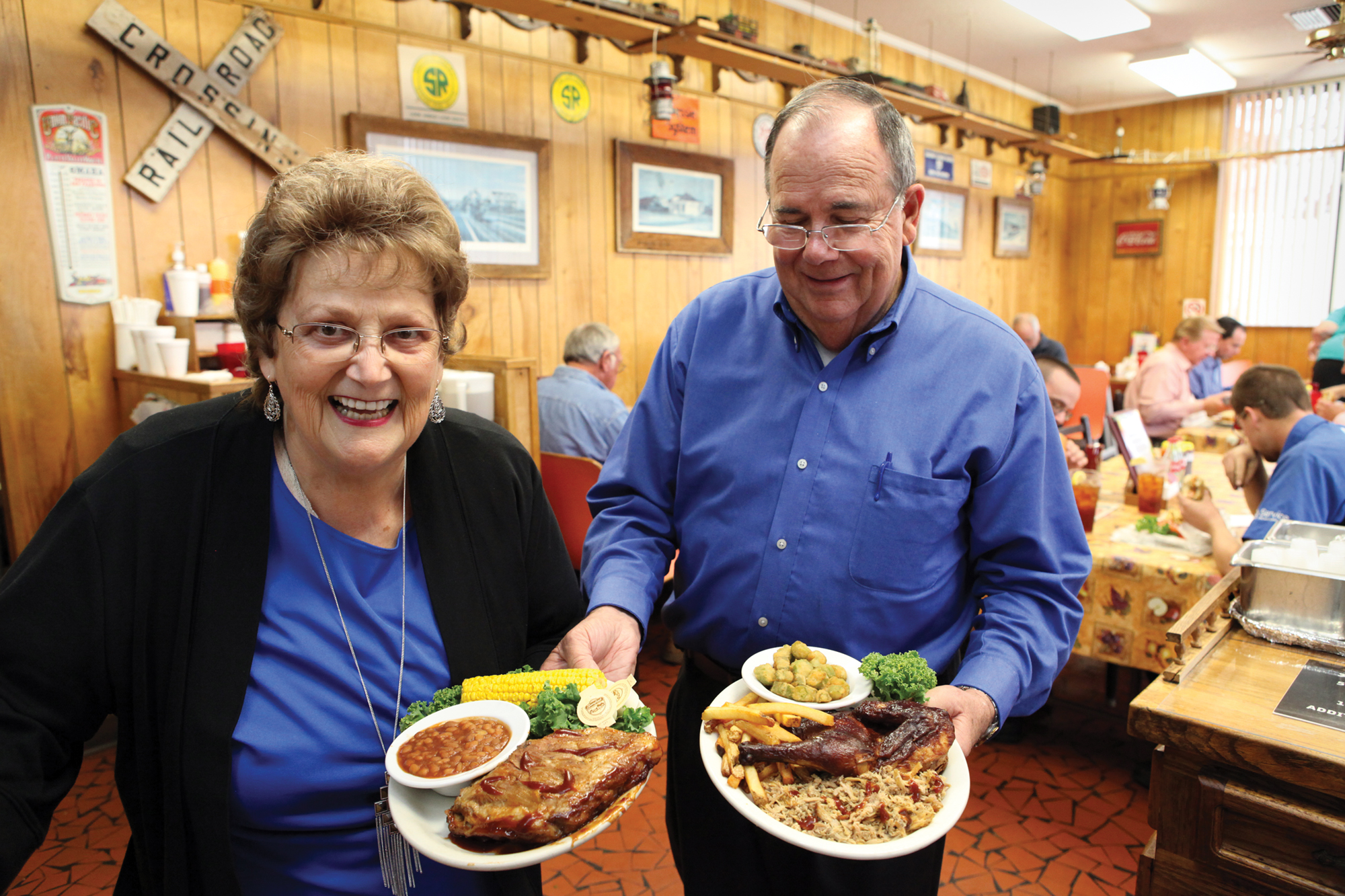 Gene and Linda Medlin moved to town in 1985 with their hearts set on opening their own barbecue restaurant. photograph by Brent Clark

Like any good North Carolinian worth his pepper and vinegar, I look for the woodpile. It’s there, all right — a stack of hickory logs just beyond the take-out window. A brick chimney, shimmering on top from the rising heat, lords over it. Satisfied that this is the real deal, I walk inside and find the requisite pig figurines, always looking so gleeful despite their prominence on the menu. Since this restaurant is considered a local icon, the kind of place profiled in barbecue guidebooks and bragged about across state lines, I look for the inevitable autographed pictures of famous visitors. They hang above the door, mostly singers of the Nashville variety: Ronnie Milsap, Pam Tillis, Garth Brooks, Earl Thomas Conley (“To all at Carolina Bar-B-Q. Thanks.”).

A young waitress seats me beneath an overhead train track. Every now and then the toy locomotive gives a toot and circles the dining room. “You know, growing up, I never had my own electric train, and I think I’m old enough now to have one,” says Gene Medlin, who, along with his wife, Linda, moved here from Stanly County to open this restaurant in 1985. It was once the location of the Big Rebel Drive-In, a favorite hangout that served fried chicken, burgers, and ice cream. When Medlin and his wife were looking to start their own business, they settled on North Carolina’s sacred plate — barbecue. Of course, it would be easier and cleaner for Medlin to snuff out the woodsmoke and cook his ’cue with gas or electricity. His take on that: “Not as long as I’m here.”

And as long as he’s here, he’ll never talk about the restaurant without talking up his wife, and he’ll insist to anyone who wanders in with a notebook that she deserves as much ink as he does. “We wanted to use the restaurant as a springboard to get her into the catering business,” he says. Judging by the photos on their website, her catering business can set one magnificent spread.

Here at my table beneath the train track, I order the large chopped-pork dinner with fried okra, slaw, and hushpuppies, and I top it all off with hot blackberry cobbler and a hunk of vanilla ice cream. Sitting across from me, Medlin reflects on his years in Statesville. “We charted our course 28 years ago to be a clean, wholesome, family restaurant that happened to specialize in good North Carolina barbecue. So far, we have never wavered from that course.”

He knows I’m not here solely to talk barbecue, but to dig into the lore of his adopted hometown. And then it occurs to him — a story about Statesville, he says, must include the story of Tom Dooley. “That’s got to be in your story,” he says. “As much as I like to talk about Carolina Bar-B-Q, that put Statesville on the map.” The story, in a few small bites, is this: Thomas Dula (Dooley is the local pronunciation), a veteran of the Civil War, was tried, convicted, and hanged in Statesville for murdering a 21-year-old woman, whose body was found in a shallow grave in nearby Wilkes County. Nobody thought Dula could get a fair trial there, so it moved to Statesville. The case was embroiled in a whodunit controversy. Dula supposedly said on the gallows, “Gentlemen, do you see this hand? I didn’t harm a hair on the girl’s head.” 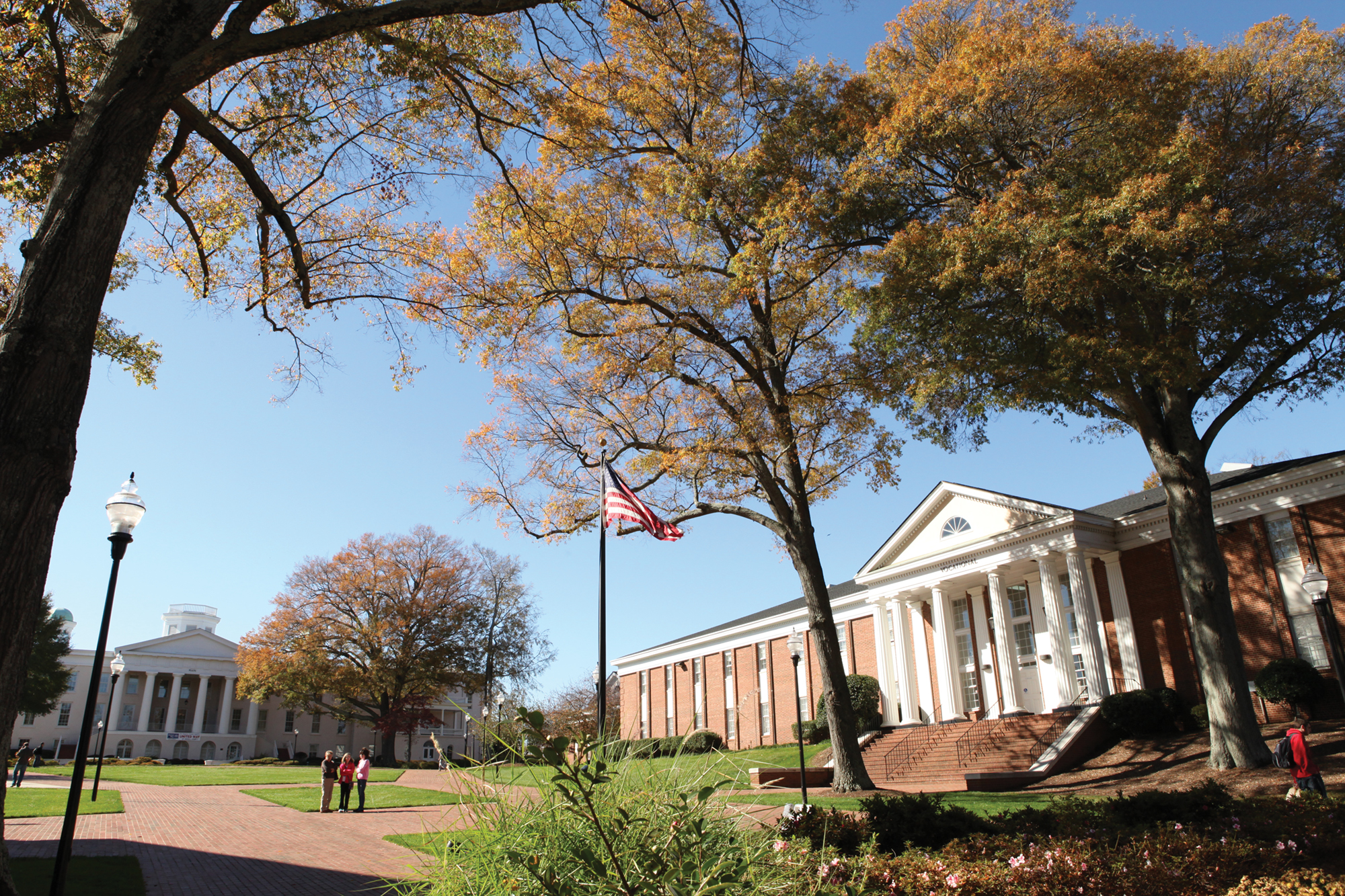 A place to explore

So full of barbecue and a colorful side of history, I feel compelled to burn off some calories. I drive to where the landscape surrenders to lofty trees and century-old homes with columns and wraparound porches. The Davie Avenue and Broad Street Historic District is a residential Eden. I park my truck and walk a couple of blocks to soak it all in. Other people are out walking their dogs and jogging.

I walk on to Mitchell Community College, an imposing presence on a hill at the end of Broad Street. The main building, with its six Parthenon-style columns, overlooks downtown Statesville. I amble along a brick walkway known as The Circle, looping as it does around an expanse of grass, soft and lush. The school was founded in 1852 as a Presbyterian women’s college but is now a two-year community college with more than 3,800 students. On this Saturday the campus is empty, the setting quiet and contemplative.

But daylight is fading fast. The interstates summon me. So I climb back in my truck and head east on Broad Street toward I-77. I turn onto I-77 north, then to I-40 east. The neon-trimmed signs of the interstate wayside illuminate the darkening sky, and soon are blotted out in my rearview mirror. The mighty I-40 lies before me in the headlights. I become one with the cruise-controlled travelers, the people who would be wise to slow down near Statesville, and stop for a plate of barbecue and a walk around town.