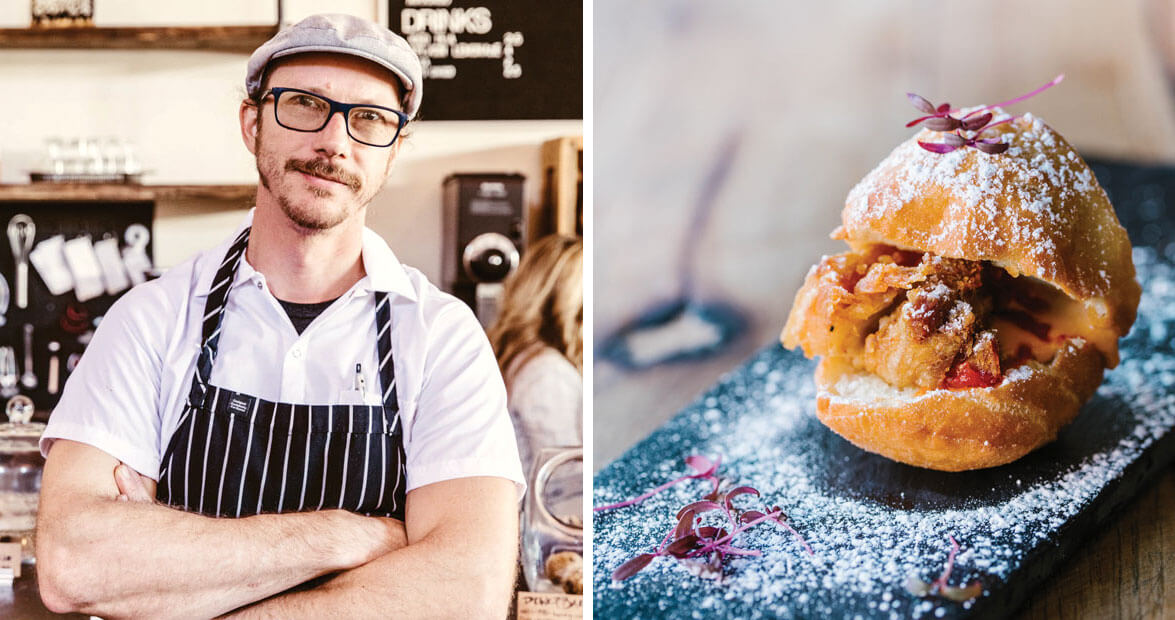 Cooking over a hot stove at his Stone Table restaurant in Monroe, Matthew Sganga swirls a spoonful of bacon fat into a sauté pan and reimagines one of his grandmother’s traditional Piedmont dishes through a French lens.

He sautés diced red onions and minced garlic, then tosses in handfuls of sliced red cabbage, a pinch of salt, and a squirt of gastrique. With the flair of an expert chef, he flips the cabbage in the pan until it wilts, then folds in arugula, bacon, goat cheese, and black pepper. The bland vegetable of his childhood reemerges as an elegant warm salad.

For Lee Ann Soowal, a designer from Weddington, ordering the dish for the first time was “a leap of faith.” Cabbage had never been her favorite food. But the combination of flavors works so well that she now orders it nearly every time she dines at Stone Table. Root vegetables, too. “I didn’t know I could love root vegetables so much!” she says.

“Part of our mission is to really bless the community with something a little more outside the box than what they are traditionally accustomed to,” Sganga explains. “We’ve tried to create a restaurant that will have an appeal anywhere in the world, but with the place and the history of food in the Piedmont region.”

His pork belly doughnut pays homage to the Chinese bao bun, as well as the simple pork fat biscuit that his grandfather carried to school in a metal pail in the 1920s. “We jazzed it up a little,” Sganga says. “We roast the whole belly and then cut it into small pieces and re-crisp it, and put it in a doughnut with pepper jam and spicy mayo and powdered sugar. It’s sort of a sweet and savory and tangy mouthful.”

Customers order near the bar where the soda fountain once stood. Sganga and three other chefs work in the back, where pharmacists filled prescriptions. 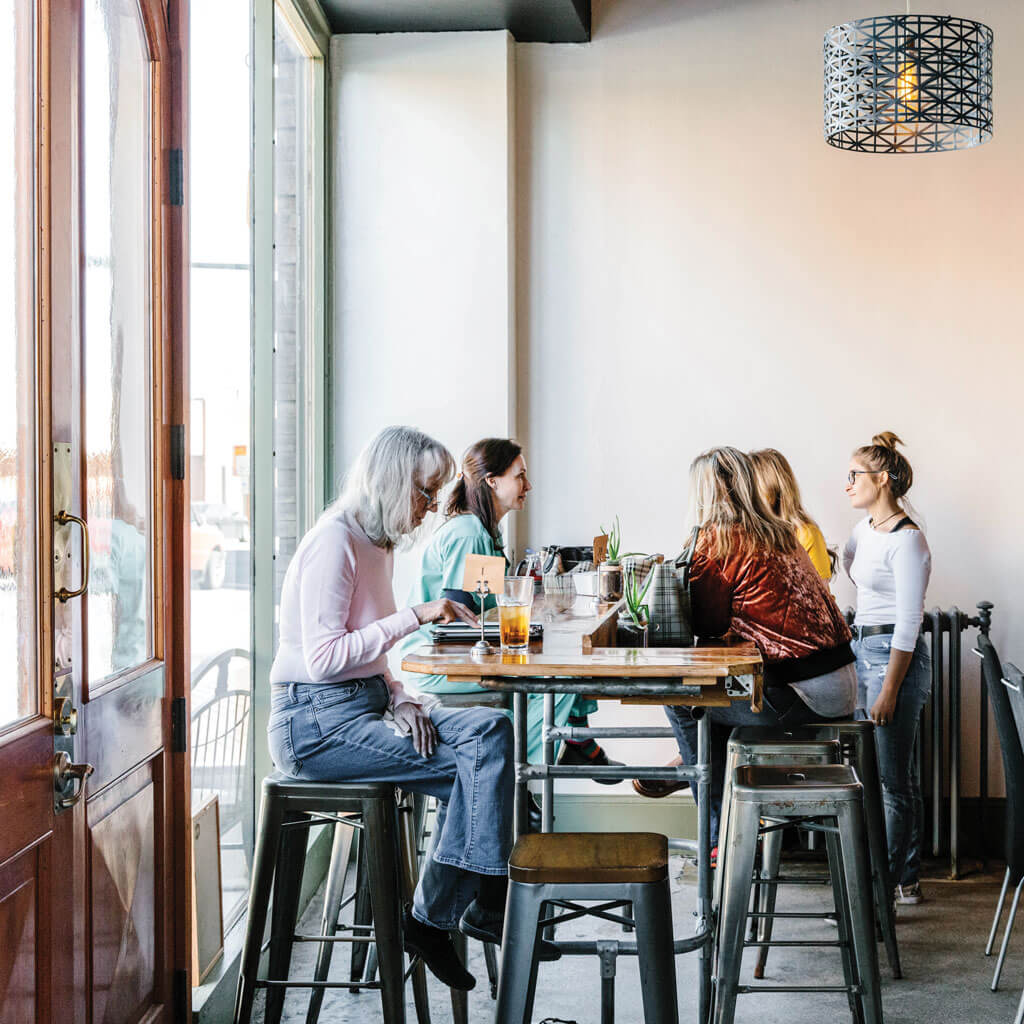 One regular describes Stone Table as “a burst of sunshine” in Monroe. photograph by Laura Sumrak

If the friendly staff seems to get along like family, it’s because many of them are family. Sganga’s mother bakes bread, crackers, and desserts. His wife, Mallory, serves the food. Two of their three daughters are baristas. And although other employees are not related, Sganga says, they have become like family.

“We’re all learning together,” he says.

Sganga began cooking in high school at a part-time job at Wendy’s. It wasn’t until he was hired as a pot washer at Santé restaurant in Matthews that he learned about fine dining. After working his way up to chef de cuisine, he struck out on his own and eventually started Stone Table catering, which he still runs. In 2005, he opened the restaurant. His journey from short-order cook to innovative chef landed him back where he always hoped to be: home in Monroe, cooking with local ingredients.

“We try to enhance but not use items that are so foreign to the grandparents who live here,” he says. “We don’t want to scare people off by being too trendy, but we do want to stay at least with the curve, if not a little ahead of it. That’s the only way we can stay creative and happy.” 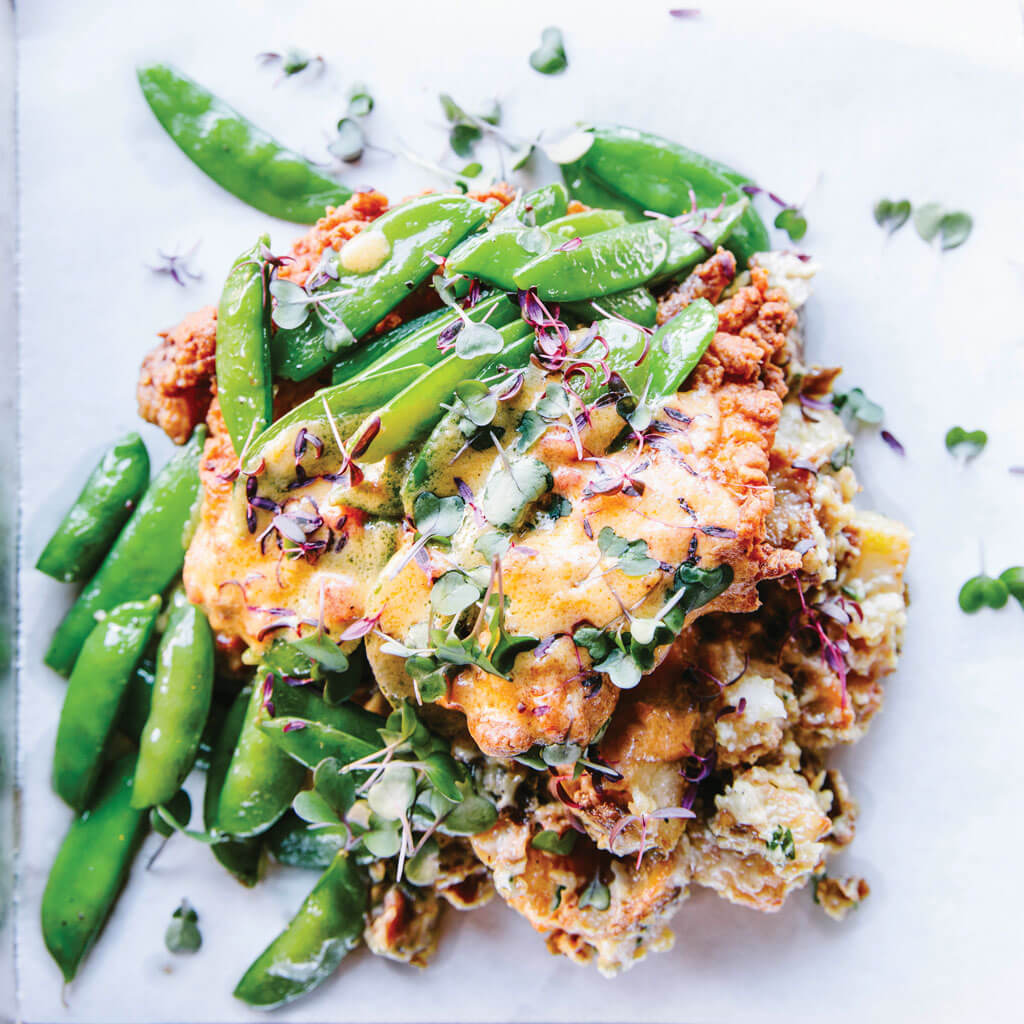 For adventurous diners, Sganga creates a lunchtime “whimsy dish” that’s always a surprise: You don’t know what you’re getting until it’s served. And Sganga often doesn’t know what he’ll prepare until he opens the refrigerator and sees what’s available. Friday and Saturday dinners — four courses, served family-style — are also a surprise.

“You’ve got to trust a chef, knowing you have no choice over the menu,” says Matt Smith, who works nearby. “I’m not walking into many restaurants, saying, ‘OK, serve me.’ But with Matt, it’s, ‘Throw me what you got.’ He’s a brilliant chef.”

Smith and his wife, Claire, call Sganga “the mad scientist.” Their all-time favorite Sganga creation? “Chocolate-covered bacon with sea salt,” Smith says. “It sounds ridiculous. But it was just the most perfectly balanced thing I’ve ever eaten — salty, sweet, savory, and smoky.”

Sganga had transformed the breakfast staple. “I giggled,” Smith says, “it tasted so good.”