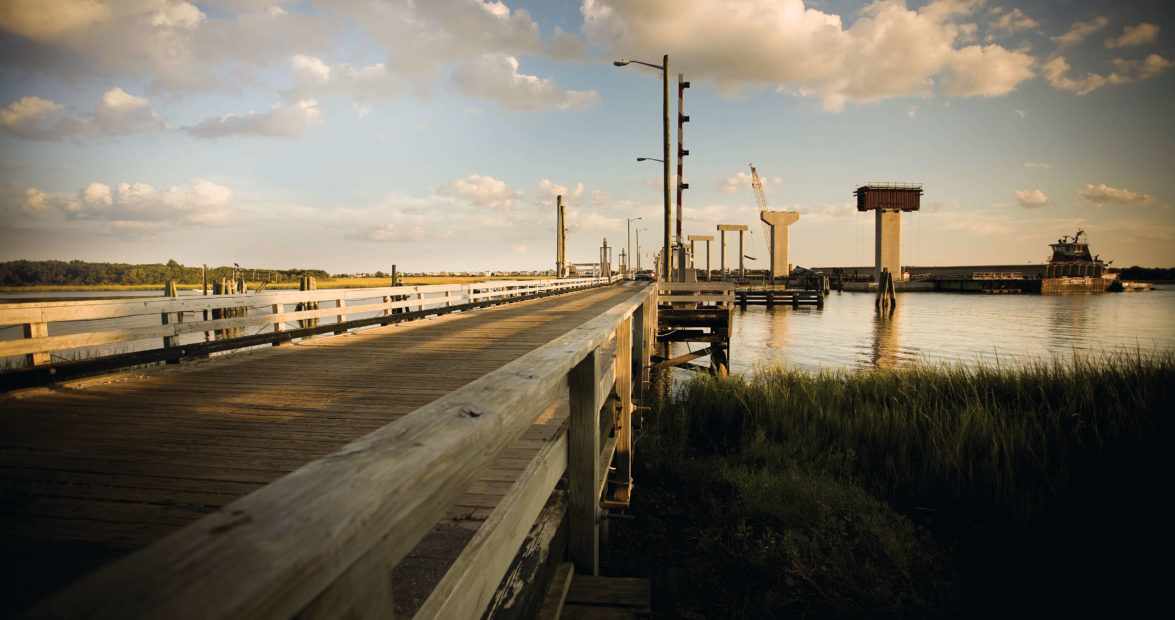 EDITOR’S NOTE: This story originally ran in May 2010. Since that time, an organization – The Old Bridge Preservation Society – formed to protect the Sunset Beach Bridge from demolition.

Every hour on the hour, the Sunset Beach Bridge does the impossible. It stops time. It is a genuine little throwback device along the Intracoastal Waterway at the southernmost point of the North Carolina coast. It is a rusty, weathered, and warped little piece of antiquated engineering. But come the top of every hour, it is more reliable than Big Ben. From Memorial Day to Labor Day, summer life on and around the three-mile isle of Sunset Beach is a constant flow of minivans and SUVs. They shuttle from the island to the mainland and back at a count of nearly 7,000 vehicles a day.

That’s when the Carolinas’ last pontoon bridge literally swings into action. The traffic lights on both land-bound ends of Sunset Boulevard flip to red. Two mechanical arms lower with a bounce to block the road. And just as it has since it was first placed over — or more accurately, into — the waters of the narrow channel, the creaky old wooden bridge forces everyone to stop what they’re doing. For 10 minutes, tourists and locals alike have no choice but to slow down, take a deep breath, and savor their surroundings.

“I love it when that red light comes on,” says vacationer Tom McCullen of Raleigh, standing outside his truck and craning his neck to see the bridge up ahead. “Some people go crazy when they’re going into town for dinner and get caught by the bridge. But I love it. And I’m not the only one.”

Every time the Sunset Beach Bridge turns, the banks along the mainland side of the waterway become covered with onlookers, standing among the palmettos and wind-bent sea pines. They snap photos or simply pause to share the moment with loved ones, watching an armada of fishing boats and yachts silently glide through the open gate.

Some wear T-shirts bearing images of the bridge. Others have already purchased postcards of the bridge and mailed them back home. Every summer, visitors leave with framed prints, puzzles, coffee mugs, and refrigerator magnets, all adorned with portraits of the bridge. It even has its own fan page on Facebook. In a town more populated with birds than people, the Sunset Beach Bridge is the area’s biggest celebrity.

“One of the most gratifying experiences about being where we are is watching people react whenever the bridge is turning,” says Clarice Holden. She and husband Ronnie opened Twin Lakes Seafood in 1970, located right at the entrance to the island. When the horn sounds to signal a bridge opening, patrons regularly abandon their shrimp dinners to go watch. “Families have been lining our parking lot or looking out of the windows of the restaurant for generations, brought together by the bridge,” she says. “I just love to see parents taking their children out to see it, knowing that so many did the same with their parents. It’s just magic.”

It’s more than magic. Built in 1961, the bridge wasn’t supposed to last more than one generation. In fact, the state first started talking about replacing it as early as 1979. It was constructed during a time when the 3,000-mile Intracoastal Waterway was crisscrossed by a grab bag of different bridge types. Some swung while others were cranked skyward or rotated. Every span was a uniquely designed contraption to fit its environment, from the chilly winter waters of New Jersey’s Manasquan River to the Gulf of Mexico outside Brownsville, Texas.

Sunset Beach developer Manon Gore settled on a design that really wasn’t a bridge at all. It’s a floating barge, supported by four giant foam pontoons. It doesn’t actually swing so much as it is pulled, eased from its moorings by a four-cable pulley system and parked parallel to the shoreline until the last boat has passed. In the early days, sailors and would-be beachgoers pulled up to Gore’s house and honked their horn twice. He’d run out, bathrobe and all, and let them pass.

These days, bridge tenders like Bill Prince spend their eight-hour day shifts sitting in the tiny white house of an office that is bolted alongside the floating 500-foot piece of road. It’s not a bad place to work, complete with air conditioning, heat, and TV. Instead of car horns, his radio crackles with requests from commercial boat captains. Prince then descends down a spiral staircase into the engine room. There he operates the old bridge with a rudimentary set of controls mounted atop a German-built diesel engine. With the push of a couple of buttons, the old barge jolts to life and then rides along the cables.

During Prince’s 15 years as a bridge tender, late-rushing cars have missed the bridge and ended up in the marsh. He’s seen boats get their rotors tangled in the cables and, once, part of the bridge was broken off and carried away on the bow of a runaway barge.

“When I was in the Army, we built bridges that did everything and that you could put anywhere,” says Chuck Francka, the North Carolina Department of Transportation’s bridge supervisor for Brunswick County. “We even made bridges that you could drop out of the sky. But I’ve never seen a girl hold up like this one has.”

As the Missouri native talks, he does so with unashamed sentimentality. As he talks about repairing compromised cables and replacing rotted wooden planks, he sounds like a proud son taking care of an aging parent. And his voice reflects more than mere pride when told how much the old span means to its community. “The Sunset Beach Bridge,” he says with a chuckle. “She’s the little bridge that could.”

During the 1970s and ’80s, the eclectic bridges of the waterway were replaced with skyscraping concrete arches that allow for uninterrupted flows of traffic on the road above and in the water beneath. One-by-one, the old spans were shut down, including nearby drawbridges in Little River and Myrtle Beach, South Carolina. They even replaced the drawbridge at Ocean Isle, just one community to the north. But the little bridge that could stayed put.

As those areas have become overrun with high rises and splashy T-shirt stores, Sunset Beach has continued to ease along at an old-school coastal Carolina pace. That tone is set by the old bridge, which continues to rise and fall with the tides, floating along and forcing others to float along with it.

But no bridge, no matter how beloved or well cared for by Francka’s crew, can fend off the wear and tear of the calendar or the corrosive salt air. Not even a time machine. During the spring of 2010, the Sunset Beach Bridge stood watch over its 50th and final tourist season, doing so in the increasingly long shadow of a new 65-foot tall concrete bridge.

From his home on the waterway, 83-year-old Frank Nesmith looks back to the southeast and can see them both. He moved to town not long after the swinging bridge opened. During the transition between bridges, he sent out weekly emails and photos, updating friends and family on the progress of the new bridge. Among those recipients was his niece, Nancy Hughes Miller. As a little girl growing up in Tabor City, she learned to love the Sunset Beach Bridge during frequent trips to the beach. Now she lives in Cary with her husband, Bryan, whom she met at Sunset Beach.

“It won’t be the same,” she says. “It will be sad, but I won’t cry a river of tears. We’ve had great memories there. So many people have. The Sunset Beach Bridge will always be a bridge to our past. There’s nothing sad about that.”