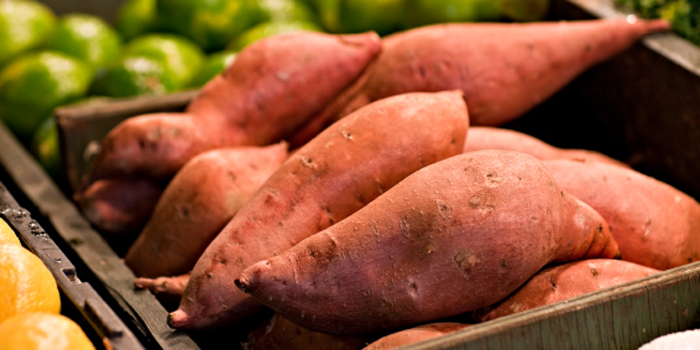 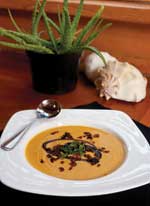 Chef Andy Hopper grew up on Southern fare, so he knows that sweet potatoes and country ham go together. But Hopper thrives on pushing culinary boundaries. When a cooking competition challenged him to create a dish using Johnston County country ham, he concocted a pork-filled sweet potato soup incorporating coconut milk, ginger syrup, honey, and mascarpone cheese. That soup helped Hopper win Fire On the Dock, a regional cook-off held this summer in Wrightsville Beach, as well as scores of new fans for his Morehead City restaurant, Chefs 105. The soup was so popular that Hopper included it on his fall menu. It’s a game changer for anyone who thinks sweet potatoes belong only in casseroles. 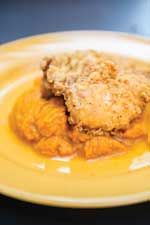 Every course on the menu at Stephanie Tyson and Vivián Joiner’s downtown Winston-Salem restaurant includes a dish with the versatile namesake vegetable. “When I wrote the menu, I realized there were so many things with sweet potatoes on it, I thought, let’s call it Sweet Potatoes,” Tyson says. Traditional embellishments, such as brown sugar and pecans, make appearances, but here they pair sweet potatoes with less common partners. Diners top their baked sweet potato appetizer with white cheddar, bacon crumbles, diced tomato, or sautéed red onions. Sweet potato cornbread combined with sausage, sage, and thyme makes a savory stuffing for pork chops. And on the first Friday of every month, the tuber stars on the dessert tray in a sweet potato cheesecake. The rest of the month, customers satisfy their dessert cravings with sweet potato pies and bread pudding made with leftover sweet potato biscuits. 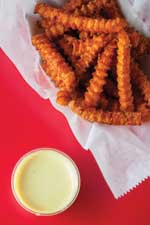 Charlotte residents will tell you this legendary drive-in is all about the burgers and fried pickles. And they’re right. But if any place gives sweet potato fries their due, it’s this one. The Penguin serves a bountiful basket of sweet potato fries that are as skinny and crispy as any traditional French fry ever dreamed of being. These fries never succumb to the sogginess that ruins many versions. And they’re finished with a touch of cinnamon. Such fry-basket fanatics as Guy Fieri of Food Network’s “Diners, Drive-Ins and Dives” and Michael Stern of “Roadfood” embossed The Penguin with their greasy-fingered stamps of approval, bringing national attention to a Queen City tradition. 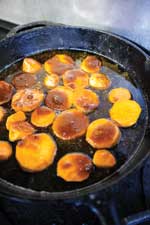 Customers find simple satisfaction in Ye Olde Country Kitchen’s panfried sweet potato slices served during the fall. Owner Bryan Wilson fries thick disks of sweet potato in a bit of canola oil and coats them in a caramelized glaze of brown sugar, sugar, and nutmeg. The dish offers the familiar taste of a traditional casserole delivered with a more al dente texture and a freshness that celebrates the autumn yield. “We try to do that in peak season,” he says. Wilson gets his sweet potatoes from a farmer near Dunn and his technique from his grandmother. He and his wife, Melodee, run Ye Olde Country Kitchen, a family operation that opened in 1969. His parents, James and Louise Wilson, and his grandparents, Robert and Ruby Wilson, ran the place before them. All of the dishes come from family recipes.