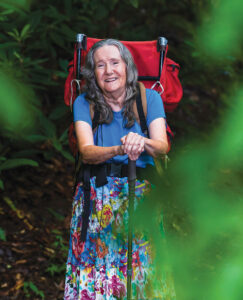 Alice Cooper has spent much of the past 40 years hiking the mountains northwest of her home in South Carolina. photograph by Tom Moors

Intercepted at a trailhead in a remote corner of Transylvania County, she stops to introduce herself: “My name is Alice Cooper. Just like the rock singer, only I look better.”

And that she does. Cooper wears a white sun visor, an orange backpack that was old when she got it back in the 1980s, and a long, floral skirt with every color of springtime in it.

Today, this 78-year-old grandmother is doing some reconnaissance after church, checking out the Auger Hole and Canebrake trails in Gorges State Park. At the bottom of the gorge, the Canebrake Trail merges onto the Foothills Trail, where a magnificent cable bridge vaults the Toxaway River. Has she seen it?

Cooper dismisses the question with a wave of her hand. “Law, I crossed that bridge when it was young.”

North Carolina has a thing for swinging bridges. In the early 1900s, the North Carolina State Highway Commission began constructing a series of suspended footbridges over streams and rivers in isolated communities in western North Carolina, where roads were scarce and the most reliable form of transportation was your own two feet. Fewer than two dozen remain, spanning tributaries like Big Rock Creek, the Cane, the Tuckasegee, the Little Tennessee, and the North and South Toe rivers. These bridges stand as little-used but rustic reminders of a simpler time, when the pace of life moved as serenely as the broad, shallow waters over which they often crossed.

Arguably, the most famous suspended footbridge in North Carolina is Grandfather Mountain’s Mile High Swinging Bridge. Since 1952, this 228-foot bridge has thrilled and terrified countless visitors who’ve set foot on its gently undulating boardwalk. Fearless children scamper across, heedless of the yawning chasm below, while many otherwise brave adults white-knuckle the side rails from start to finish. When these intrepid souls step onto solid ground, the relief on their faces is apparent — until they realize there’s only one way back. 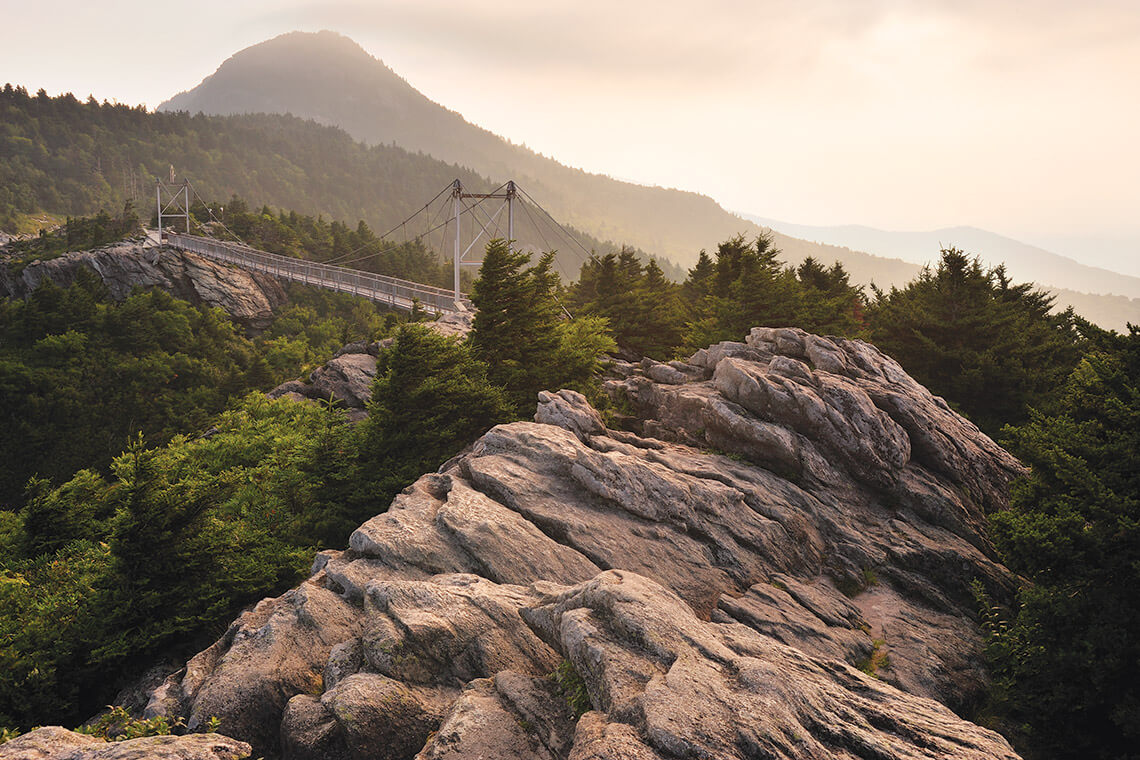 The Mile High Swinging Bridge at Grandfather Mountain has been an icon among suspension bridges since 1952. photograph by David Blevins

But perhaps the most captivating of these rustic structures are seen by the fewest people, hidden from view by everyone but those willing to sally forth into the state’s forests and parks. And while few and far between, they are rarely forgotten by those who encounter them.

What is it about swinging bridges in the forest that makes them so special? For starters, they are alive. They bounce. They sway. They creak. They flex. They give. They bend. They yield to footfalls and rebound, transmitting a spring to your step that carries you forward just a little more lightheartedly. To some, the wobbly structures are unsettling. But for others, like Alice Cooper, they are a source of unalloyed joy.

“I just love ’em,” Cooper says. “I don’t know. I like high places. I like the movement. I like the feeling of it. There’s something about them that makes me feel free.”

A self-described “bad girl,” Cooper also confesses to bouncing up and down on them from time to time. “I know you’re not supposed to,” she says, “but sometimes I just can’t help myself.”

“They’re like bouncy houses in the middle of the woods,” quips Gary Sizer, a U.S. Marine Corps veteran who thru-hiked 2,000 miles of the Appalachian Trail in 2014 and chronicled the experience in his book, Where’s the Next Shelter? He recommends the Foothills Trail as a barometer for one’s readiness to tackle the AT. Sizer recalls his first sight of the Toxaway River bridge, midway along the trail: “I just remember thinking, ‘Oh man, this is so cool.’ ”

For Sizer and other outdoors lovers, what makes a swinging bridge in the woods truly memorable isn’t just its liveliness, but the fact that it’s even there in the first place. Thoughtful, intentional structural engineering appearing so deep in the forest is a kind of wonder in and of itself. Stranger still, these structures look like they belong. The vertical tower girders at each end of a bridge mimic the stands of oak and maple and tulip poplar that surround them. The steel cables drape the sides like ancient vines. The weathered wood treads, often littered with fallen leaves in the autumn, resemble the forest floor. 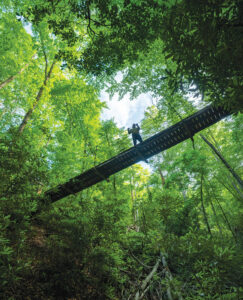 Not far from Brevard, in Pisgah National Forest, the Andy Cove Nature Trail offers a gentle hike along boardwalks and across a 30-foot suspension bridge. photograph by Derek Diluzio

“They are just really pure, from a design standpoint,” says Parker Platt, president and principal architect at PLATT, a 40-year-old architecture, construction, and interior design firm based in Brevard. “You look at them, and they’re just some cable, some wood, and someone’s ingenuity.”

The history of suspension bridges spans more than 600 years. The ingenuity of which Platt speaks was provided by Thangtong Gyalpo, a Tibetan saint with a knack for civil engineering. Gyalpo’s simple suspension bridges used twisted willow trees and yak skins to form the suspension cables before making the switch to more reliable iron chains (Gyalpo was also a pioneering blacksmith). He is credited with building dozens of suspension bridges in Tibet and Bhutan, one of which stood until the early 2000s.

Yet for all the wonder that these structures inspire, their reason for being has little to do with aesthetics and everything to do with practicality, which is why they are so often found in out-of-the-way places. The materials needed to construct them are relatively easy to move to the site. They can span long distances. And they’re inexpensive to construct. The result is a kind of Zen-like rightness: “They are beautiful because they are only what they need to be,” Platt says.

Reaching the 225-foot Toxaway River Bridge is a challenge even for seasoned hikers — the most direct route is through Gorges State Park via the Frozen Creek access and requires a stout 11-mile out-and-back hike. On the bright side, you get two swinging bridges for the price of one. Less than 100 yards from the Toxaway River bridge is a shorter but no less inviting cable span that crosses Toxaway Creek.

Those looking for a less strenuous way to scratch their swinging bridge itch can check out Pisgah National Forest. Four suspension bridges make repeated crossings of the pristine South Mills River (Trail No. 133), all accessible via the Turkey Pen Gap Trailhead, off NC Highway 280 at the border of Transylvania and Henderson counties. (Two of the bridges were damaged by flooding during tropical storm Fred.) In the Piedmont, Eno River State Park features a suspension bridge on the Cox Mountain Trail. 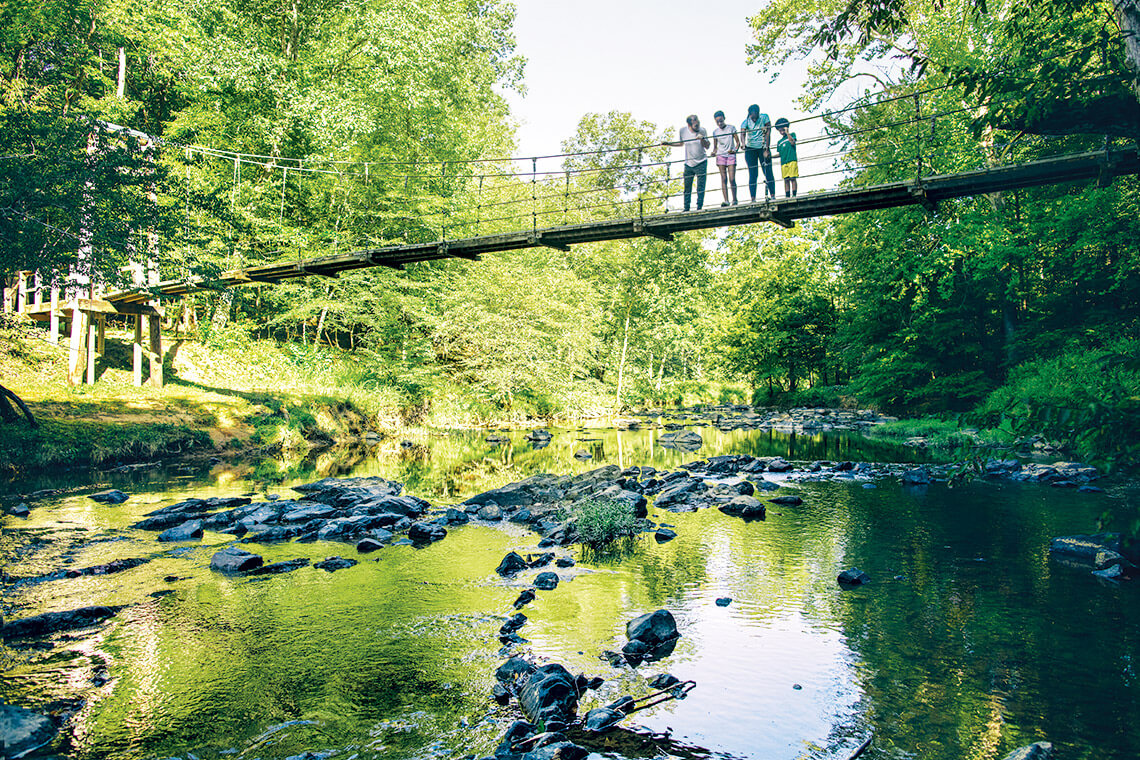 Not all of North Carolina’s swinging bridges are located in the western part of the state. In the Triangle area, visitors to Eno River State Park encounter a suspension bridge that gently bounces with every step. photograph by Tyler Northrup

But one of the easiest ways to experience a pedestrian swinging bridge is to hike the 0.7-mile Andy Cove Trail, located directly behind the Ranger Station and Visitor Center on U.S. Highway 276 at the entrance to Pisgah National Forest near Brevard. There, the swinging bridge appears around a bend, like a surprise gift. Its tower beams and cross timbers create the impression of a door frame through which you glimpse an enchanted forest just beyond, beckoning you forward. And that, too, is what a swinging bridge is: a portal that turns an ordinary walk into an adventure. In short, there is no easier way to tap into your inner Indiana Jones.

When she’s on the trail, Cooper is as chatty as a magpie, commenting on the beauty of surrounding foliage, sharing hard-won hiking wisdom, telling her life story. Suddenly aware that hers has been the only voice heard for some time, she declares, “Mama was an even more profuse talker than me.”

She was a sickly child, suffering a range of illnesses that set her back a year in school in her hometown of Spartanburg, South Carolina. In her early 20s, she was almost killed in an automobile accident. In the years after her two sons were born, her physical fitness deteriorated to the point where she would have to stop and rest twice just to get to a nearby friend’s house. Finally, at the age of 39, she decided enough was enough. She had always loved the mountains, having visited South Carolina’s Table Rock State Park with her family. A friend helped her get in good enough shape to try a couple of overnight camping trips. And she was on her way. 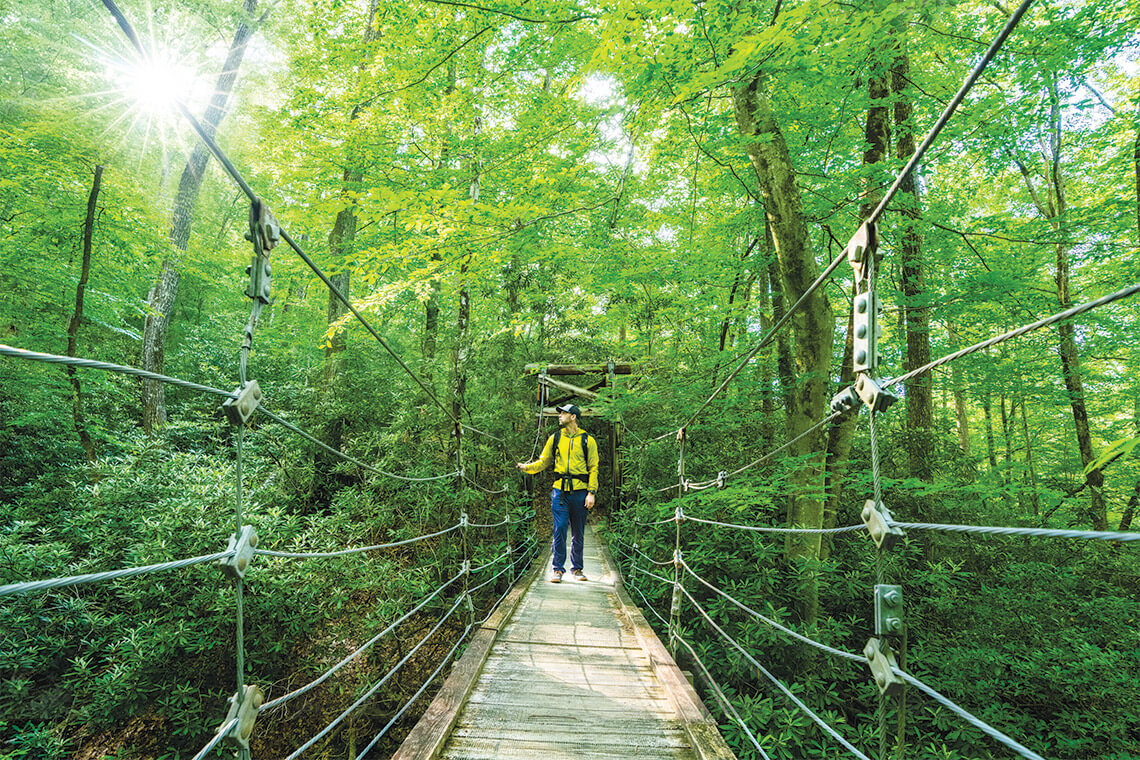 A swinging bridge along the Andy Cove Nature Trail blends seamlessly with the towering hardwoods and lush mountain laurels and rhododendrons of Pisgah National Forest. photograph by Derek Diluzio

Unable to afford even the most basic hiking equipment, Cooper fashioned her first walking stick using a mop pole and a rubber tip from an abandoned crutch. It’s accepted wisdom that the western North Carolina mountains are so expansive that you can’t “out-hike” them. But over the past nearly four decades, Cooper has given it her best shot. In all, she’s rambled thousands of miles. She may have lost a step or two, and she finds herself looking for “gravity rocks” more often — “They’re the large, flat ones that suck you down and make you sit a spell” — but she intends to keep going as long as she can.

Much like the trails she’s spent her adult life exploring, Cooper’s life has had its share of ups and downs. She lost a beloved husband. She’s seen the birth of five cherished grandchildren. She’s survived breast cancer. Through it all, the trail has been her inspiration, her solace, her escape, her refuge, her joy. And maybe that’s why, whenever Cooper clambers onto a rickety old swinging bridge deep in the woods, she bounces up and down with the glee of a child, wise in the knowledge that there is no better way to shake off the worries of the world.