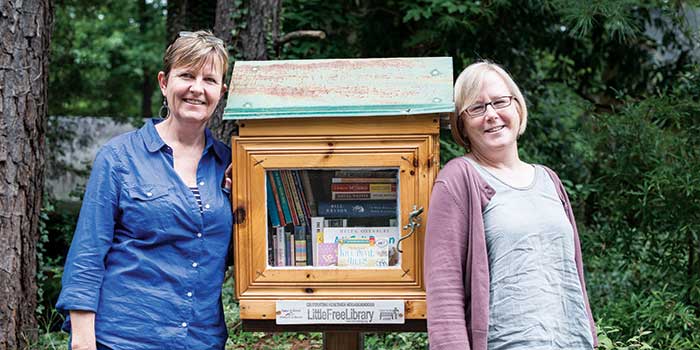 On a September afternoon in 2012, the residents of Prince Street in Durham gathered for a party. They weren’t there for a holiday or anyone’s birthday. They were celebrating the opening of their new library — a 20-by-27-by-13-inch box between the yards of two of their neighbors, Joanne Belanger and Heidi Hannapel.

Belanger is the library’s steward: It was her idea to bring Little Free Library, a nationwide movement, to Prince Street. She recruited her husband, Greg Rakauskas, to build their library out of recycled materials.

“One day I was listening to NPR and heard a short, three-minute segment about the little libraries,” Belanger says. “I thought it sounded like a lot of fun to have one in my neighborhood.”

The concept is simple. Order a library from the Little Free Library website or build one yourself — all designs are welcome. Fill the library with books and register on the Little Free Library website for a $35 fee. And then you’re on the map, along with hundreds of libraries across the country — and around the world. A neighborhood party is optional.

Belanger and her neighbors are taking part in a movement begun in Wisconsin in 2009 and inspired in part by Andrew Carnegie’s support of 2,509 free public libraries at the turn of the 20th century. The founders of Little Free Library decided they would try to top Carnegie’s efforts by building 2,510 libraries, a goal they met a year and a half early, in August 2012. At the time, at least five of the libraries — in Garner, High Point, Ocean Isle Beach, Raleigh, and Southport — belonged to communities in North Carolina.

Currently, Belanger’s is one of more than 20 Little Free Libraries that pepper the state between Asheville and Nags Head, but there are more on the way, thanks to Sarah Maxey.

At the end of July, Maxey, a Winston-Salem resident, created a Kickstarter campaign online, hoping at first to raise $175 to bring a Little Free Library to her city. But her fund-raiser soon took off, and by the time it ended a month later, 586 backers had pledged more than $10,000. Maxey plans on using the unexpected funds to spread the Little Free Library movement across the state. She says she will build many of the libraries by hand.

“They’re not your average library. There is an excitement about them,” Maxey says. “There’s a curiosity and this spark because it promotes reading for pleasure and fun. It associates positive emotions with reading.”

The libraries promote a sense of community, too. People have left books on Maxey’s porch for use in her library; lottery tickets have been hidden inside some of the books for whoever checked them out.

“I really want people to have a shared experience when using the library. I want these books to have little stories in them,” Maxey says.

Belanger, a preschool teacher, always tries to keep her library at least half full of children’s books. But other than that, she says, there’s a wide range of literature inside at any given time.

“You never really know what you’re going to find in the library,” Belanger says. “It’s always such a cosmic mix.”

She’s happy with the traffic that comes through her yard, but there’s one thing she wishes would happen more. When the library opened, she left a notebook inside for patrons to write comments about the books they leave and pick up. So far, it hasn’t been as popular as the library, but Belanger is hopeful.

“It would make the books in there that much more special,” she says.

To see a map of all Little Free Library locations, visit littlefreelibrary.org.

Jonathan Black was an intern at Our State during summer 2013.