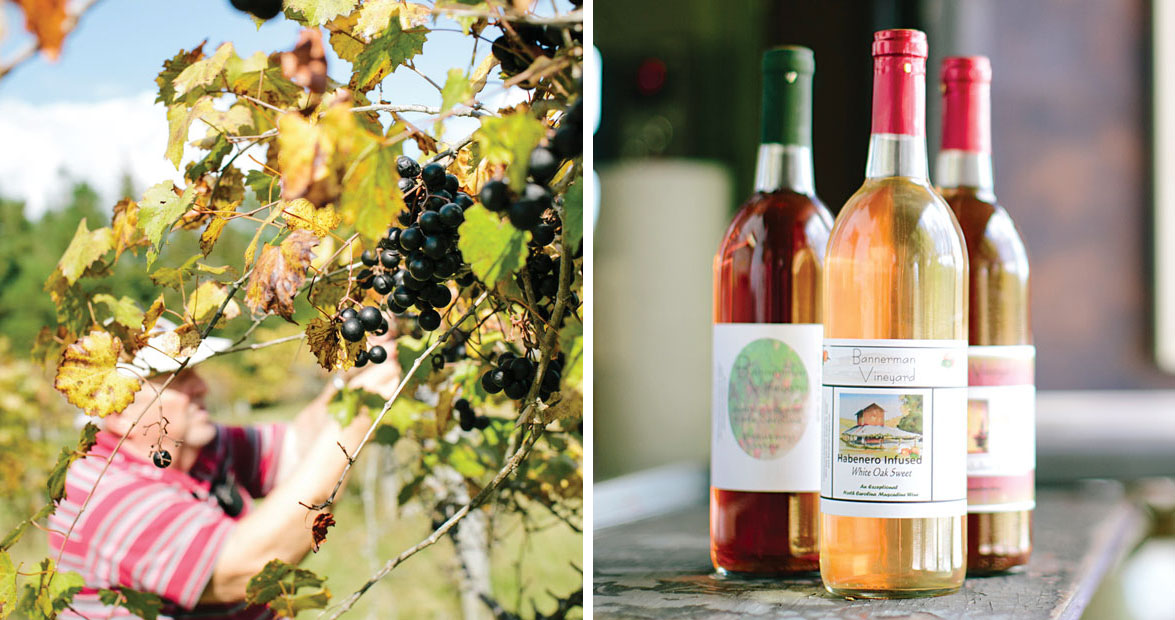 Muscadines are fine with being picked, plucked, squeezed, juiced, jellied, and pied. They do not, however, like standing knee-deep in water. So when Hurricane Fran blasted through Pender County in 1996, and Hurricane Floyd barreled through in 1999, sending Burgaw Creek over its banks and destroying Bannerman Vineyard — twice — Scot Bannerman looked at his wife, Colleen, and said, “It’s time to bottle the grape.” They had already been making muscadine wine as gifts, and now they were ready to make it a business. So, what began as eight acres of muscadine vines in 1973 — one of the very first muscadine vineyards in the state, selling grapes to Piggly Wigglys, Hill’s grocers, and you-pick customers — became a winery in 2005.

Bannerman Vineyard is a small, mom-and-pop player in the muscadine wine biz, and they like it that way. On their 18-acre vineyard, they cultivate seven varieties of muscadines, from the petite black Noble to the Nesbit, which grows to the size of a small plum. Every single grape is hand-picked.
The September harvest produces 10,000 liters of wine per year — “a drop in the bucket compared to Duplin,” Colleen says, which produced more than 1 million gallons last year — but Bannerman has its devotees: young professionals from Wilmington, 95-year-olds from just ’round the corner, and even clientele as far away as Maryland and Ohio.

Some visitors ask for dry wines, and Colleen tells them right away that they’re in the wrong place. A muscadine is sweet, and the wine it produces is sweet. The Bannermans make blended wines with local produce: blueberries; strawberries; apples from North Wilkesboro, where one of their four sons lives; and even fresh ginger, for its purported healing effects.

A muscadine is a quirky, humble thing, and so is the Bannerman wine-tasting room. The serving bar rests on casks; a wooden Pinocchio shares a cozy space with cat figurines and a dog named Scooby. Outside, picnic tables and rocking chairs sit beneath shade trees, and between the 5,000-pound bladder press and a cypress tobacco barn, whose slanting roof is picturesquely covered in tangled vines.

And although wine is made all year, in September and October those seats will be filled with people: you-pick eaters downing muscadines like potato chips; customers buying plain muscadine juice for their healthy diets; and certainly wine sippers, likely to be munching on Scot Bannerman’s boiled peanuts as well. Because everyone likes a little salt with their sweet.