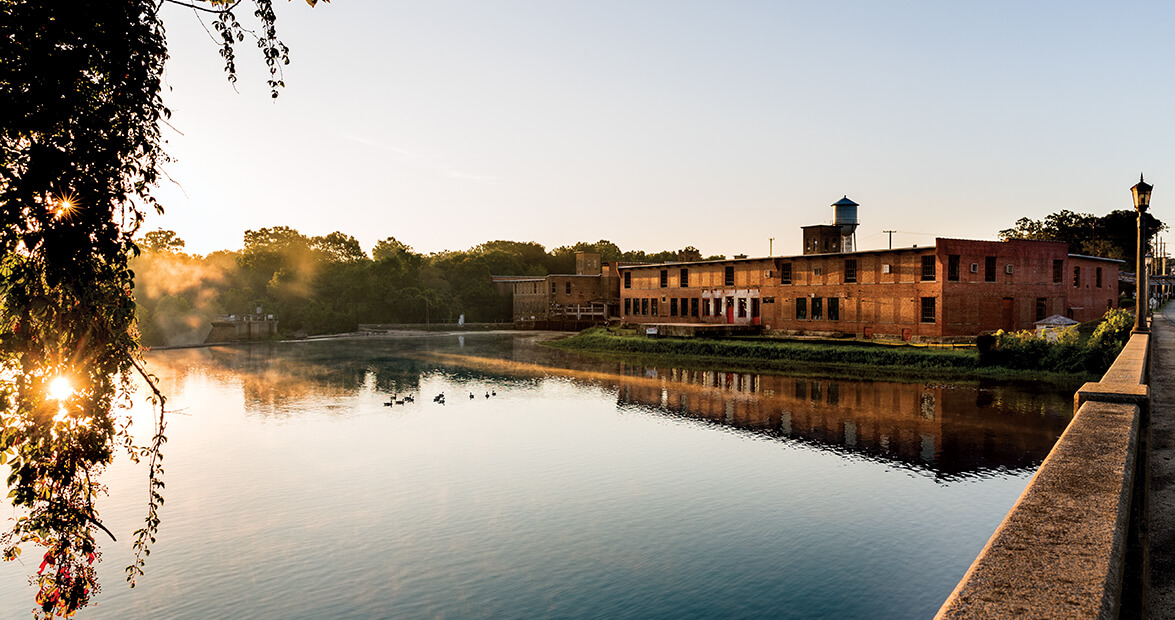 The Tar River lazes between cypress-shaded banks before its high-speed collision with granite just north of downtown Rocky Mount. The river pushes through a jumble of boulders, spilling over ledges, coiling around little islands, and working itself into a lather. Along the bank, like a bygone fortress, are the weathered brick walls of Rocky Mount Mills, one of the state’s earliest cotton mills.

Through the 1800s and most of the 20th century, the Tar River rapids powered the looms that did the spinning, spooling, carding, twisting, roving, and warping of yarn inside the 300,000-square-foot complex. The mill, in turn, sparked the birth and growth of Rocky Mount, a name inspired by the outcroppings in the river.

For nearly two centuries, the mill was an economic powerhouse, so much so that it was a town unto itself — Rocky Mount Mills — until it merged with the rest of Rocky Mount in 1927. The company provided houses for its workers, a school for the workers’ children, a doctor’s office, police and fire protection, electricity generated by one of the first steam turbines in the state, and a baseball team called the Fighting Skinners. 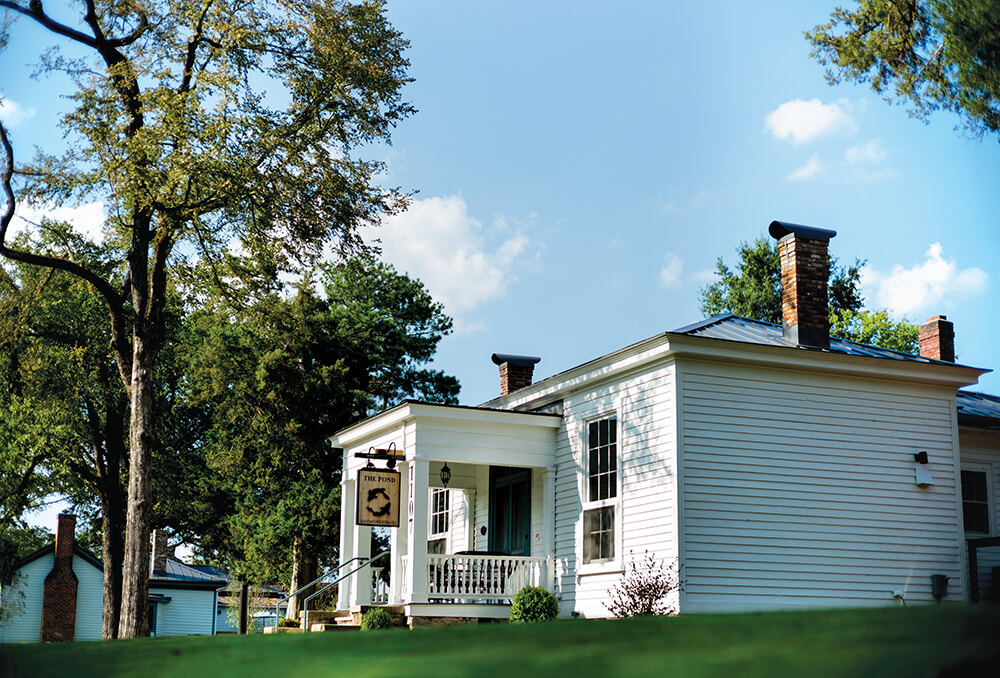 “I had aunts and uncles, and all of them worked at that cotton mill,” says lifelong resident Donna Holt. She remembers her aunt coming home from work with cotton in her hair. “It used to be what Rocky Mount was all about,” she says.

But for Holt’s generation, the mill experience is decidedly different: She stops by her relatives’ former stomping ground for lunch at Sweet Taters, the new café and brewery located in a restored mill house near the old factory.

In 1996, the mill — like so many textile mills across the South — shut down, putting 320 people out of work and sending its equipment abroad. The buildings sat hollow for years, and eventually, the whole complex became a shell of broken windows, crumbling bricks, and knee-high weeds. Still, the people of Rocky Mount couldn’t conceive of tearing down such a treasured landmark.

Their loyalty proved to be good business sense, too: The riverside ruin — a cavernous structure with rustic charm on a stretch of scenic rapids — had the potential to power a town revival. But it took the vision and resources of a broadcaster to reshape the old bricks and mortar into a place for people to live, work, eat, listen to music, and hoist a cold one at the end of a long workday.

As CEO of the Raleigh-based Capitol Broadcasting Company, Jim Goodmon had come to Rocky Mount in 2004 for a speaking engagement. Along with owning television and radio stations across the region, the company is known for taking on ambitious real estate endeavors. In the early 2000s, it transformed the abandoned American Tobacco campus in downtown Durham into an arts, entertainment, and residential district, complete with a ballpark for the minor league Durham Bulls. Now it’s one of the city’s crown jewels.

During that visit to Rocky Mount, Goodmon and his son Michael, who’s in charge of the company’s real estate division, were shown around town. “And we saw this mill, and we just loved it,” Michael says. “It was the most gorgeous mill we had ever seen.” 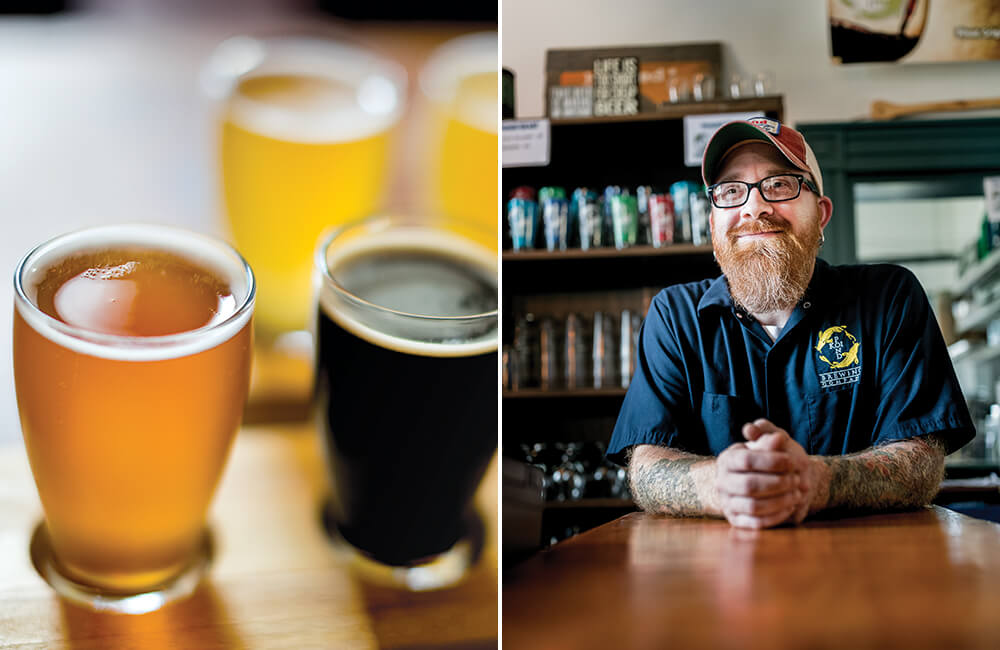 The original mill was built in 1818 and was the second cotton mill established in North Carolina. It flourished in the decades leading up to the Civil War, when it began churning out cloth for Confederate uniforms. That, combined with its economic prominence, made it a target for Union troops, who burned down the building in 1863. The rebuilt mill was torched again in 1869 by a disgruntled worker. The present building has stood since about 1870.

In 2007, Capitol Broadcasting decided to buy the mill and its outlying structures. Everything about the site — its scenic riverfront, its proximity to U.S. Highway 64, offering easy access to the Triangle and I-95 — indicated commercial promise. Goodmon says these old textile mills are so much a part of the identity and soul of North Carolina communities that keeping them viable is a beautiful thing. “I think when you revive those old buildings, you revive the pride that they represent in the community imagination,” he says. “We saw that in Durham, and we’re certainly seeing that here.”

“We thought beer, as a part of the mill’s mix, had the potential to bring people together.”

People had all sorts of ideas for the property. Some suggested a shooting range in the mill. Others thought a go-kart track would rev it back to life. But then came this whole notion of making beer: Why not turn Rocky Mount Mills into a hub for craft beer brewers? The craft beer craze that swept through Asheville and the Triangle bypassed Rocky Mount and its surrounding counties.

“We thought beer, as part of the mill’s mix, had the potential to bring people together to talk, to trade ideas,” Goodmon says. “That kind of gathering and sharing can lead to community growth.”

Chris Flora, a native of Zebulon, started Sweet Taters with his wife, Erin, who is the brewmaster. “It’s fun to look back here at all this stainless steel,” he says, pointing to a dozen tanks. “It’s like a big science lab.” 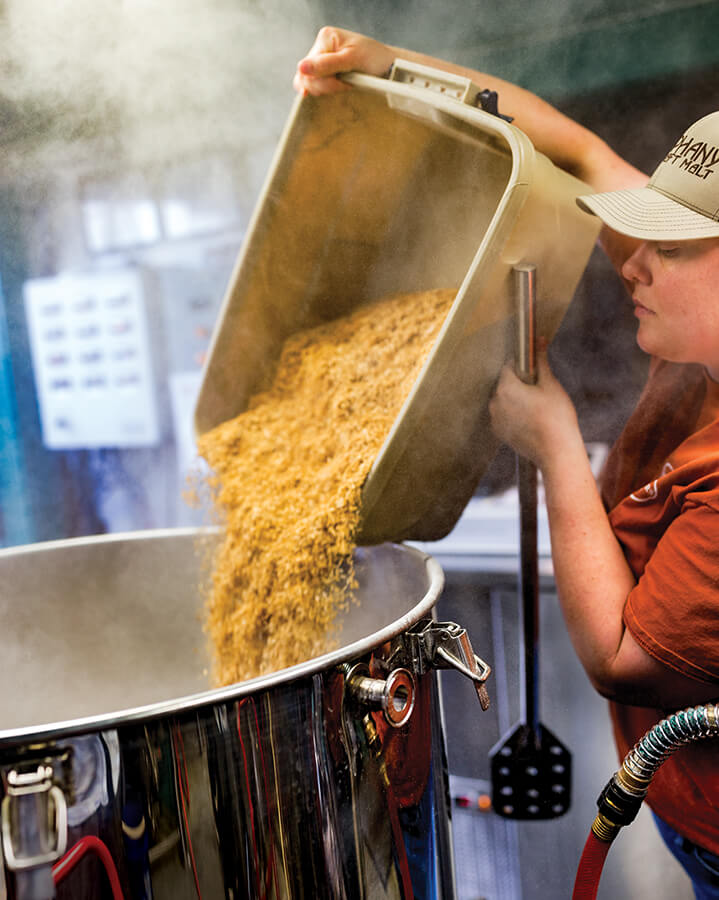 Sweet Taters brewmaster Erin Flora preps the house brew to go with the sliders and flatbreads on the menu. photograph by Charles Harris

The Rocky Mount Brewmill plans to have up to eight breweries on-site and is partnering with Nash Community College, which offers courses for its brewing, distillation, and fermentation certificate program. As it was in the past, keeping the community involved is key to the mill’s future. “I think there is a beer tourism notion here that will be powerful,” Goodmon says.

Beer won’t be the only big draw to Rocky Mount Mills. The development will house approximately 44 apartments, some 60,000 square feet of office space, and one or more restaurants. Community partners are discussing ways to use the seven-acre island in the river, possibly for trails. All of this is expected to be wrapped up and ready for visitors by mid-2018.

Restoration efforts extend beyond the mill itself, and will include dozens of mill houses for rent along River Drive, Elm Street, and Carr Street. “We can’t even get one completed before someone wants to move in,” says Tim Bailey, the project’s operations manager. He grew up in the mill village, and his father worked in the textile plant.

He says the houses are “zero maintenance” — the staff cuts the grass and plants annuals twice a year. Each cozy house comes with a fenced backyard, washer, dryer, refrigerator, and a “kegerator” to keep your locally brewed beer cold and fresh. Looking at the houses from the street, the word “adorable” comes to mind. “The before and after would just blow your mind,” says Bailey. 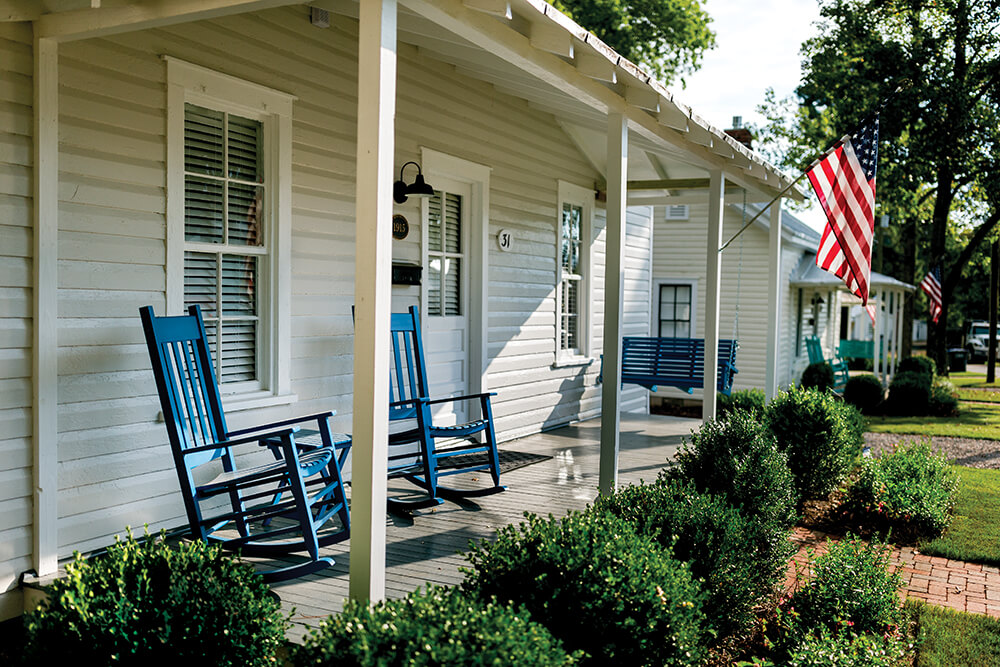 These restored mill houses come with a ready-made community and a “kegerator” to keep your beer cold. photograph by Charles Harris

The grandest home on the mill property is the two-story Benjamin Battle House, a Greek Revival mansion with four chimneys and a front porch framed by columns. Built in 1835 and named for the son of the mill’s founder, the house eventually served as the company’s general office. For most of the mill’s history, its owners were members of the Battle family.

“Young people are coming back and seeing an opportunity to be somebody, leave a mark.”

The history of the mill is on display inside the house, where black-and-white photos of workers on the job hang in the corridors. Upstairs, a nonprofit called SpringBoardNC has set up shop to provide a resource center for people looking to start a business in Rocky Mount or eastern North Carolina. Jeff Tobias, a 36-year-old Rocky Mount native and vice president of SpringBoardNC, says he’s glad the mill redevelopment is sparking interest in Rocky Mount as a destination. “It’s a central place that people of my generation — and all generations, really — can go to be together,” he says. “It gives us the amenities that we’ve been trying to draw to the area.”

In recent years, Rocky Mount has been beset with one of the highest unemployment rates among all of the state’s metro areas. But Eric Ghiloni, co-owner of Koi Pond Brewing Company, says the city is due for a renaissance. “I think we’ve hit the place where it’s a blank canvas; opportunities abound,” he says. “Young people are coming back and seeing an opportunity to be somebody, do something, and leave a mark.”

The river is a powerful lure for newcomers. In a landscape that’s mostly flat, the falls of the Tar come as a delightful surprise. You don’t expect them here; indeed, they’re the Piedmont’s last rocky hurrah before the Tar makes its languid, looping course to Pamlico Sound.

After generations of turning spindles and cranking power looms, the hard-charging Tar River has reached a turning point: Life is flowing back to its banks, a new industry is on tap, and an old mill is poised to become the economic toast of the town.