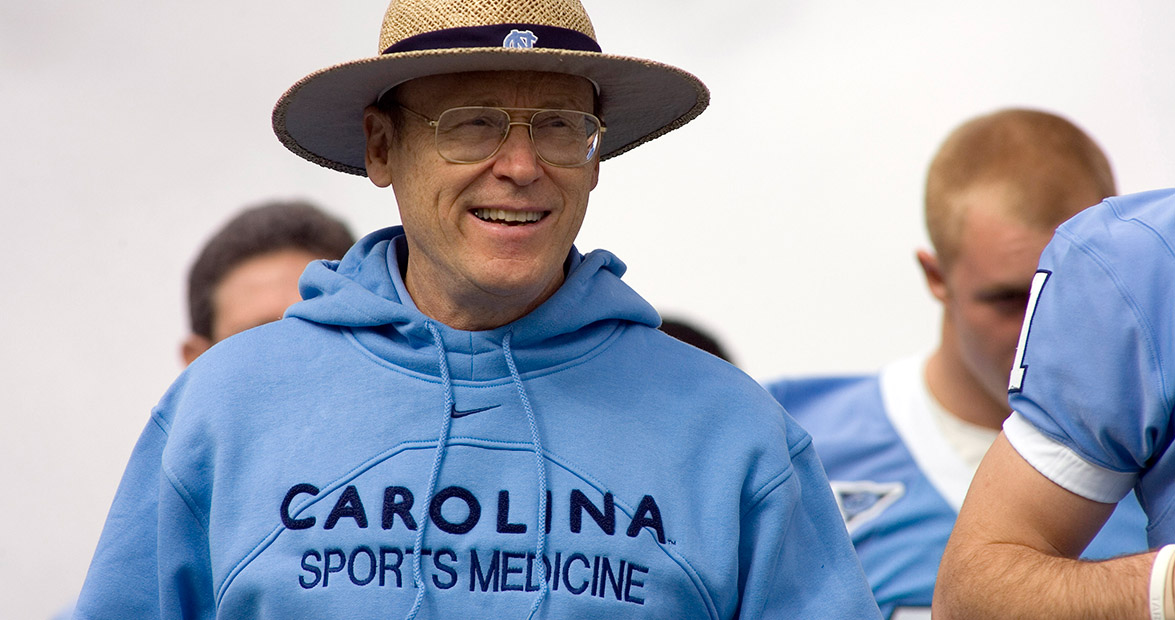 When people find out that you’re a doctor, you get asked a lot of questions. Does this mole look OK to you? What can I do about the ache in my back? My toe sticks out kind of funny; is that normal? But Dr. Tim Taft is always asked one question above all others: Is so-and-so going to play this weekend?

True-blue Tar Heel fans’ hopes hinge on Taft’s answer. As the team physician and orthopedic surgeon for UNC-CH’s varsity football program, sometimes he bears good news. Sometimes he doesn’t. When the ball is in play, he might be on the sidelines, but for decades, Taft has been at the heart of the game.

He loves what he does because of the people he’s helped and their tenacity through it all.

“One of the things that is peculiar about the athlete is that they really want to get well,” Taft says.

When going through a rehabilitation program, traditional patients might sometimes need a little extra push or dose of encouragement now and then so that they’ll heal faster. But when it comes to athletes, it’s oftentimes a matter of trying to slow them down, rather than trying to speed them up. They’re eager to get back on the field. Taft wants them to, too, so long as it’s safe enough for them to play.

There have been a lot of smiles exchanged and tears shed over the years since Taft was a medical resident at UNC in the early 1970s.

At that time, the university was on the heels of creating what may very well have been the first organized sports medicine program in the country.

In 1971, offensive guard Billy Arnold died after suffering a heat stroke during a football workout. The tragedy spurred conversations about how to properly care for and treat athletes. UNC’s program was born as a result, and Taft headed the orthopedic portion. As a result of the sweeping changes made, coaches no longer had authority over doctors; instead, doctors would report to other doctors to ensure players had enough recovery time. Conversations shifted from “Make sure Charlie is out there Saturday,” to, “How long will Charlie be out?” Decades later, various peer universities have just now begun to establish similar programs, some 40 years after UNC pioneered its own.

During his time here, Taft has not only witnessed the face of sports medicine change, but has also helped shape it.

“If we’re practicing medicine 20 years from now the same way we are today, we’re not doing a very good job,” he says.

Several decades ago, when the football team was seeing an unusually high number of knee injuries in its offensive linemen, Taft and then coach Dick Crum began to review game tapes to see when injuries were occurring on the field. They discovered that players were getting hurt as a result of not paying attention to what was going on around them after completing a play. Based on his analysis, Taft recommended a few coaching changes, and the problem was relatively simple to fix.

And remember that 73-yard, game-winning touchdown Giovani Bernard made in the final seconds of a 2012 matchup against NC State? It ended the Wolfpack’s five-win reign over the Tar Heels, and Taft had something to do with that — though he’ll downplay his role in the whole matter when you ask him. When Bernard injured his knee earlier in his UNC career, it was Taft and his team who put it back together.

“To see him run that punt back against State was kind of cool,” he says with a chuckle.

But unlike touchdowns, the impact Taft has made in his field isn’t something that can be quantified by numbers on a scoreboard. His efforts as a doctor extend beyond Chapel Hill.

Taft was the lead physician for Team USA in several sports during various Olympic Games in the 1980s and ’90s. More recently, he has been involved with the Special Olympics, serving as medical director for the 1999 World Games in Raleigh and as the current North American representative for the international group’s medical advisory committee.

“He makes sure our athletes are having the best time possible but are doing it in a way that’s safe for them,” says Keith Fishburne, President and CEO of Special Olympics North Carolina. 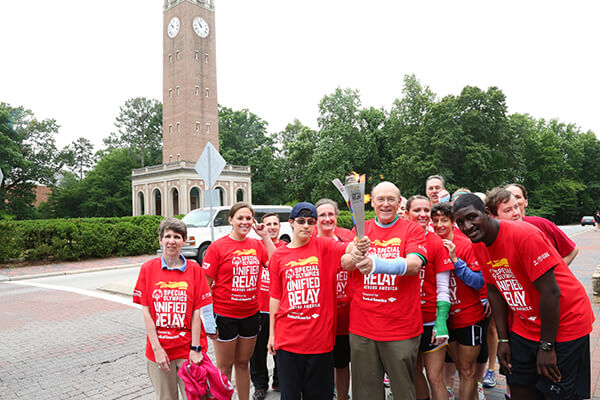 Taft leads a team through campus as part of a torch relay for the Special Olympics. Photograph courtesy of Max Englund, UNC Health Care

Taft wears his compassion like one of his spirited Carolina blue bow ties, not far from his heart, and often.

Before Rick Steinbacher became a senior associate athletic director at the university, he played football for Carolina from 1989 to 1993. He’s gotten to know Taft well over the years, especially when an injury sidelined him during his final game, a bowl game his senior year.

“He knew that I was disappointed but would never let me feel sorry for myself,” Steinbacher says. “He’s a great surgeon and an even better human being.”

When the medical decisions you make can mean the difference between bowl games and ice baths, it isn’t easy. But it’s worth it.

“It’s a lot of hard work. You can’t take care of the football team and have Saturday off,” Taft says.

Someone’s got to do it. Those who know Taft best are glad he’s the man for the job.