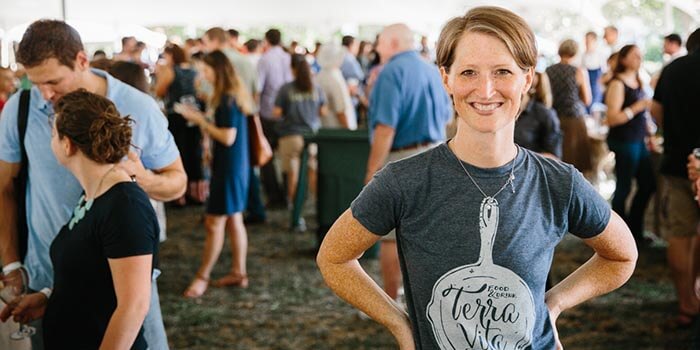 Editor’s note: This story originally appeared in the January 2015 issue as “The Triangle’s Tastemaker.”

While waiting for her decaf latte at a favorite Chapel Hill coffee shop, Colleen Minton learned they were using milk containing hormones and GMO’s (genetically modified organisms) from a local dairy farm. Without snark or irritation, Minton shared this information with the baristas in a way that left them apologetic, but not shamed. Minton still accepted the beverage with a smile.

She’s not hippy-dippy (or rude) enough to have thrown the latte away, but she knows too much about the flip side of sustainable, organic food practices to have stayed silent. As founder and director of TerraVita, a Triangle-area food and wine festival dedicated to showcasing healthy, earth-friendly food practices throughout the state, she knows a thing or two about who walks the walk. But rather than name names, what Minton really wants to talk about is how folks can implement a healthier diet, and therefore a healthier lifestyle, at home. 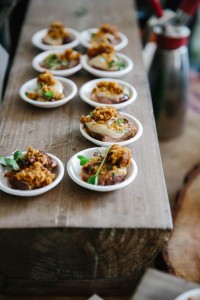 “It’s been an evolution for 20 years. I didn’t make all these changes at once. I didn’t. I couldn’t. I literally started with one small change,” Minton says.

She remembers sitting in her freshman biology class at Appalachian State University and learning about the problems the body can develop from digesting too much protein. She made a connection with her family’s deadly history of heart disease and decided to limit her intake of red meat. Years later, as research emerged showing that it’s more the quality of the meat, not the quantity, that holds the potential harm, Minton makes sure that when her family does eat red meat, it’s organic and grass-fed.

“Make one addition, or investigate one thing that impacts your life, and make that change,” she says. At one point, it was buying organic apples, then strawberries (the fruits her family eats whole). She later committed to pure maple syrup rather than the corn syrup-based ugly stepsister a lot of Americans grow up eating on their pancakes.

That Minton began her career out of college “working for the enemy” is ironic. Armed with degrees in communications and business, she was hired by a major agricultural chemical firm. The Garner native spent three years in New York City working with predominantly Southern clients. It took time and years later, lots of media coverage, for her to fully appreciate the effect of such practices. Her feelings about pesticides, GMO’s, and large-scale, conventional farming practices became more deeply rooted when her second child was born with severe and persistent food allergies.

Now 43, Minton has had an impressive 20-year career in marketing everything from software to soccer. But the past five years have been focused on TerraVita — the perfect name for such an event. “I looked at the Latin meanings for what I really wanted the event to be about,” Minton says. “Those two stood out to me: earth and life.”

Originally, TerraVita was meant to be a one-day, one-time wine event. Minton has shaped the festival around her personal values regarding healthy foodways. 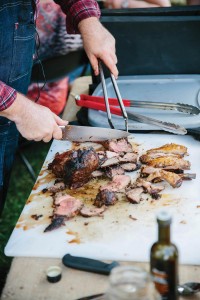 “Very few states have the amazing mountains and the amazing beaches that we have, and everything in between. And that landscape creates amazing soil differences,” Minton says. This geography means variety and, thanks to our climate, year-round growing seasons.  She understands the advantages we have when it comes to optimizing healthy food options, both in restaurants and at home. “You don’t need to be a good cook to take a rotisserie chicken from the grocery store, pull it apart, and make a salad,” Minton says.

She also realizes that healthy eating means different things to different people. Some people are driven by environmental concerns, others by medical issues. She knows many healthier options cost more money, but she firmly believes that even the smallest change matters. “You can pay now — or you can pay later, for healthcare,” she says.

Minton created a Sustainable Classrooms segment as part of TerraVita in 2011, bringing researchers together with chefs, authors, food artisans, and drink experts to discuss such heady topics as “The New Southern Table: Can Lard & Sustainability Be Served on the Same Platter?” (They can.) This year, one panel was dedicated to demystifying the preparation of fish that are often considered the “trash” of the sea. “Sustainable Fish: Trash or Treasure, from Ocean to Platter” featured chefs and fish experts from across the state who demonstrated how consuming trigger-fish, drum, and grunt can be a tasty way to both bolster the economy of North Carolina’s struggling fishing industry, and heal the overfished populations of more commonly coveted catches.

“Your values change when you have exposure,” Minton maintains. But most of all, she’s all about food, be it that humble, hot, rotisserie chicken you can’t help but pull apart in the car on the way home, or the grander — “small bites” of butternut squash ravioli with compressed apple, North Carolina crab, and tarragon presented at TerraVita’s finale by Durham’s Piedmont restaurant. She wants people to experience just how tasty healthy can be.