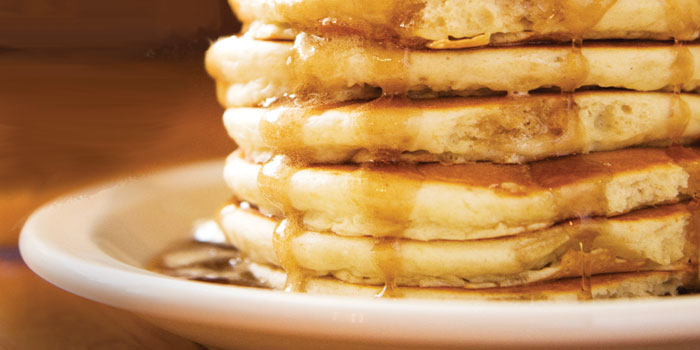 Mix. Pour. Wait. Flip. It’s Wednesday, which means Tex & Shirley’s Family Restaurant is turning out stack after stack of its famous pancakes just as fast as those wrists can flip them. All-you-can-eat pancakes for $2.49 — it’s no wonder the kitchen is abuzz and almost every table in the place is spoken for.

Pancakes. That’s what locals have come to associate with the brick-columned, green-roofed building on Greensboro’s Pembroke Road. It’s been that way for nearly 40 years — almost as long as the knotty-pine paneling has hung on the walls (which happens to be the same deep shade of amber as the maple syrup you just used to baptize your flapjacks).

You’ll know the owner of the place, Bart Ortiz, by his warm smile and neatly trimmed mustache that’s beginning to gray. He might be serving plates, refilling drinks, or in the back turning omelets, but you’ll usually spot him chatting up tables. He’s soft-spoken and stands little more than a foot taller than his seated customers. But he’s sure of himself, and even in the middle of the breakfast rush, he’s relaxed. At Tex & Shirley’s, he’s home.

First-timers tend to assume that a couple named Tex and Shirley runs the place. They did, but that was years ago.

The story of this gem begins hundreds of miles away in Lansing, Michigan. It was there, at an Uncle John’s Pancake House, that Ortiz first met Slater and Shirley Moore back in 1966. Slater’s nickname was Tex, after his home state of Texas. Tex and Shirley were managing the restaurant when Ortiz, then 16, came on board as a dishwasher.

“Shortly after I was washing dishes, Tex asked me if I wanted to start training in the kitchen and cook,” Ortiz says. “I pretty much learned everything I know about the restaurant business from them.”

Three years later, Uncle John’s transferred Tex and Shirley to Greensboro to manage another franchise in the very same building that is now their namesake restaurant. When the couple bought the restaurant in 1972, Tex originally just replaced the “Uncle John’s” portion of the sign with “Tex & Shirley’s,” leaving the bottom that read “Pancake House.” Business grew, and the couple hired Ortiz as general manager, a position he held for more than a decade.

Tex and Shirley came to know and love their customers. Tex had a big personality and a reputation for making patrons laugh.

“One thing about Tex, he always had a story to tell,” Ortiz says. “He just liked doing things.”

Ortiz recalls one day, back in Michigan, when Tex burst into the kitchen and said, “It’s kind of slow; let’s go for a ride.” So the two took an afternoon break to fly in Tex’s small airplane.

Tex was also known for table hopping and pulling up a chair to have coffee with the regulars. He and Shirley were a dynamic duo.

“They were a very good team,” Ortiz says. “She worked with the waitresses, training employees, very service-oriented. Tex was in the back overseeing the kitchen, always fixing things.”

When the couple retired in 1989, there was no question about the fate of their beloved restaurant. Ortiz bought the place but never thought about changing the name.

A good thing might be a bit of an understatement. The restaurant is only closed two days a year: Christmas and Thanksgiving. On the weekends, the busiest time, Tex & Shirley’s serves nearly 1,000 customers.

Every table is set with a pitcher of syrup, a bowl of creamers, and a glass sugar dispenser. Here, breakfast is the usual, and it’s served all day long — 6 a.m. to 9 p.m.

The most popular dishes are the French-style omelets (so fluffy you won’t pick up your knife) and, of course, the pancakes. The large, laminated menu lists 17 varieties from classic buttermilk to corn pancakes, made by adding extra cornmeal. The secret, Ortiz says, is to drizzle the corn pancakes with honey instead of syrup.

Breakfast is the specialty, but diners can also order hamburgers, steak, chicken, seafood, and pork.

Most of the recipes, including the made-from-scratch pancake batter, date back to Uncle John’s. But the award-winning food is only one reason customers keep coming back.

At Tex & Shirley’s, the relationships, like the food, are made from scratch.

Even after Tex and Shirley retired to Bowie, Texas, Ortiz kept in touch.

“I would always call Tex every other week,” Ortiz says. “He’d become a really great personal friend of mine through the years, and we were very close. I always kind of considered Tex and Shirley as my second parents.”

Ortiz made the trip down to see Tex when Shirley died. Later, in 2006, Tex returned to Greensboro one final time for the opening of a second Tex & Shirley’s in High Point. In 2008, Tex Moore died at age 86.

Now, only old-timers remember the couple, but the past is part of the present at Tex & Shirley’s. The original sign that stood outside hangs on the wall covered in a collage of photos from Christmas parties and anniversary celebrations, all many years ago. Flanking the sign are menus dating to the ’70s. Two have caricatures of the happy couple, Tex with a large mustache. There’s even one from the restaurant’s predecessor, Uncle John’s. In fact, the lamps dotting the booths still have Uncle John’s on them near the bottom.

Other than a few subtle changes, like new wallpaper and the credit card machine up front, much remains the same. The layout of the restaurant looks like it did back in 1967. Even the original pine paneling is intact.

Ortiz is 60 years old but has no plans to slow down.

“I’ve been doing Tex & Shirley’s for 32 years, and my guess is I’ll be doing it until I’m 70,” he says. The same goes for many of the restaurant’s 64 employees. He names four waitresses who have been here as long as he has.

With his eyeglasses hanging from his shirt, where he slipped them between the second and third buttons, and a pen in his front pocket, Ortiz is always ready to pitch in and take an order (or even go back to washing dishes, which he still does every once in a while).

“I still get back in the kitchen if it gets real busy and they need help,” he says. But his favorite part of running Tex & Shirley’s is talking with customers. “I like seeing the regulars and talking to them and making sure they have a good meal. … It’s really about the people.”

That’s something he learned from Tex.

The two don’t share a family tree, but if you watch Ortiz go from table to table, you can see Tex in him. Like Tex, Ortiz loves this place. And as with Tex, when Ortiz laughs, you can hear it a couple of tables over.

“I would say that a lot of our customers have become like a family of ours,” Ortiz says. “It’s just a good, family-friendly atmosphere, and we’ve all gotten to know each other.”

He quickly leans forward as if he’s about to share a secret, but the volume of his voice doesn’t fall: “And I think we have the best pancakes in North Carolina.” A smile spreads across his face as he settles back into his chair, chuckling.

There’s no need to whisper. His customers agree.

Chantel O’Neal interned at Our State magazine during spring 2011.