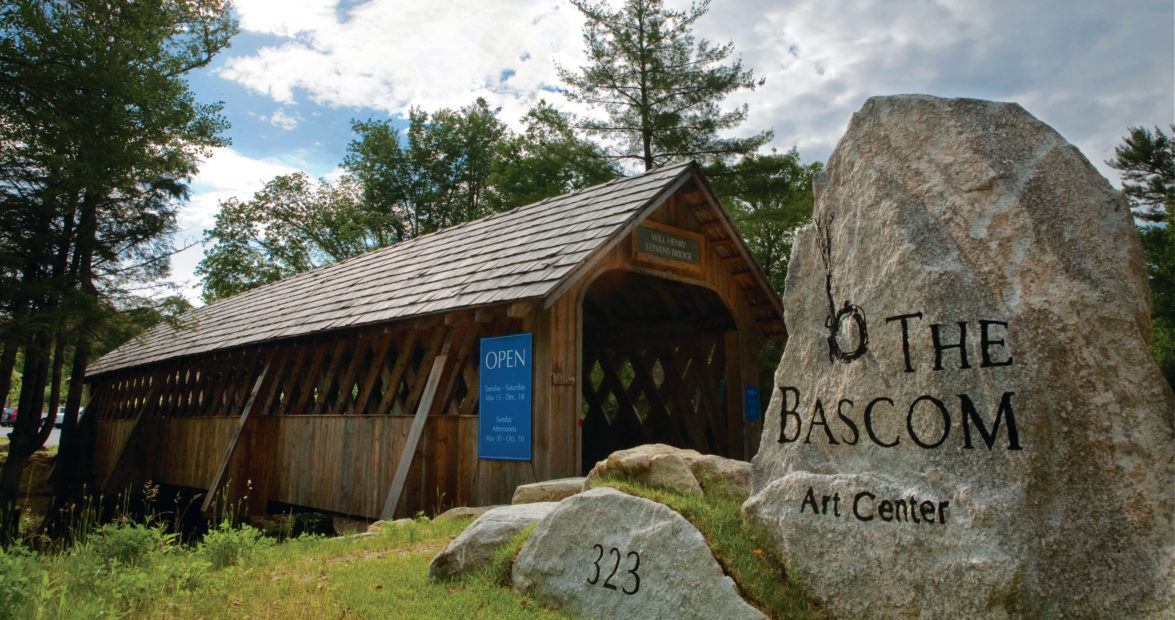 Kaye Gorecki remembers sitting on the floor of the cavernous 19th-century barn that would become the main building of The Bascom visual arts center when it held only the dust and debris of reconstruction.

“When it got to the point where the construction crew would let us in without hard hats and hiking boots,” says the center’s artistic director, “I would literally just go to the main gallery with a sketchbook and try to get a feeling for the space.”

Even then, she could feel it would be special. But as a painter and educator who worked for eight years on The Bascom’s staff when it was housed in two small rooms at the Hudson Library, Gorecki had a clear idea of what she didn’t want the place to become.

“There are plenty of art galleries in converted farm buildings,” which, while full of country charm, are not exactly appropriate for the caliber of exhibitions that she had in the works for the new 27,500-square-foot space.

Today, despite its bucolic setting amid six acres once dotted with horses, The Bascom projects a decidedly modern air. Sure, it has the weathered gray boards and pitched metal roof that pay homage to its rustic past. But broad expanses of glass allow glimpses into a thoroughly contemporary interior suffused with natural light and an eclectic assortment of art.

Since the new Bascom’s official opening in May 2009, it’s played host to a wide range of paintings, sculptures, and textiles, as well as such finely crafted items as ceramic musical instruments, guns and decoys, photographs and glassware. Exhibitions are a fusion of treasures from local artists and collectors and loans from prestigious museums.

Fayne Ansley shakes her head in disbelief as she points to the names of supporters listed on the high wall just to the left of the main entrance. The watercolor instructor, who has worked at the center since just before it opened, says the response has been overwhelmingly positive. The list of supporters is long, the visitors keep coming, and the outpouring of donations from the community has been inspiring.

Just then, she waves over Naomi Chastain, a petite woman dressed in chambray and lugging two laundry bags. Chastain’s been the head housekeeper since the doors opened on the two-room gallery in 1985, then known as the Bascom-Louise. Before that, she worked at the Hudson Library. “I’m a native Highlander,” she says, giving the bags over and sitting ramrod straight at a table in the entrance. “And I can tell you this is an asset to my hometown.”

Chastain remembers when the property belonged to the Crane family, whose stables were a popular destination for young equestrians. The Cranes gave local children rides in exchange for cleaning tack and grooming the horses. Having spent many summers doing just that, Chastain developed an abiding love for the property.

She isn’t alone. Bob Fisher, an attorney and entrepreneur from Atlanta who began coming to Highlands as a child and bought his own home here in the ’90s, also shares fond memories. So when he was asked to serve on a committee to seek a new home for The Bascom, he gladly agreed. Once the property was secured, Fisher stayed on to lead the capital campaign to restore the tumble-down barn and build the rest of the center. That’s when serendipity took over.

“We started the fund-raising process with only the pastures and the barn, and people were enamored of it,” says Fisher. Donations and surprises came from many people who hadn’t previously supported the organization.

For instance, Fisher sought the advice of Wayne Yonce, a contractor in nearby Franklin, who turned out to have plenty of experience restoring barns — as well as special memories of flirting with Florida girls visiting Highlands for the summer. When he heard about the restoration, he offered The Bascom’s board a chance to purchase a 19th-century barn he’d found in Pennsylvania to use as a companion building. “I told him we probably couldn’t afford it,” recalls Fisher. But Yonce believed the center had to have it. So to honor the memory of his wife, Yonce offered The Bascom his barn for half what he’d paid for it. “He even installed it for us at no cost,” says Fisher.

Yonce was also responsible for finding the covered bridge that now heralds the entrance to the property, as well as donors willing to foot the considerable bill for its installation. Fisher points out that The Bascom’s interiors were all designed by Ferry, Hayes & Allen Designers, who donated the firm’s time gratis, too.

“People have been so moved by the effort they just want to be a part of it,” says Fisher.
And so it continued with the first major exhibit. Alice Ballard uses those very words to describe the reaction of those who gathered for The Bascom’s exhibition of Helen Frankenthaler and the Color Field painters.

“These were not your small works of art,” says the Greenville, South Carolina-based ceramic artist. “They were huge.” In fact, one of the pieces by Kenneth Noland — on loan from the High Museum of Art in Atlanta — was so large that there were only two walls that could accommodate it. “When you have multimillion dollar works of art like that,” says Ballard, “it’s a testimony to the quality of the venue.”

It also speaks to the collective vision of The Bascom’s team and Gorecki’s talent for displaying the work, adds Ballard, whose own work is part of the permanent collections at the Mint Museum of Art, the Mint Museum of Craft + Design, and the prestigious Renwick Gallery (part of the Smithsonian American Art Museum).

Indeed, all those hours Gorecki spent conceptualizing the place created a work of art in itself. “I look at the room as a three-dimensional canvas that will hold both two- and three-dimensional objects, almost like a mixed-media collage,” Gorecki says. She uses line, movement, rhythm, and the juxtaposition of color to craft a balance between the space and what’s being exhibited. That collage reflects not only the diversity of the works, but in a larger sense the entire community with its mélange of natives and summer residents coming from all parts of the Southeast.

Ansley notes that The Bascom has grown to offer more studio art classes and lectures, and that it has become a destination for the local public schools. Children come to see the exhibits but also to learn to create their own art in the adjacent barn. “This, in a time when school art budgets are slashed, is so important,” Ansley says.

Between classes, free exhibits from May to December, and several annual festivals, The Bascom is opening up the world of art and craft to people from all walks of life.

In June, 75 volunteers from the community worked alongside renowned North Carolina sculptor Patrick Dougherty to build Do Tell, a sculpture crafted from four tractor-trailer loads of hardwood saplings collected at Highlands, Scaly Mountain farms, and Tennessee. Not only did people in the community devote more than 800 hours of labor to the site-specific structure, they also contributed saplings for the mammoth installation that will remain on display as long as nature will allow.

This month, motorcycles will roll onto the campus for display. “They showcase the art in everyday design,” Gorecki says happily. And a special collection of Frank Stella’s minimalist works is planned for display in 2011.

“Something for everyone,” she says, taking a breath before rushing on. “You know, it’s not just about looking at pretty pictures, the setting, the place, the work. I was adamant that it would be interactive. I want people to learn something.”

Judging by visitors’ exclamations and animated discussions, that part of The Bascom’s mission is a resounding success.