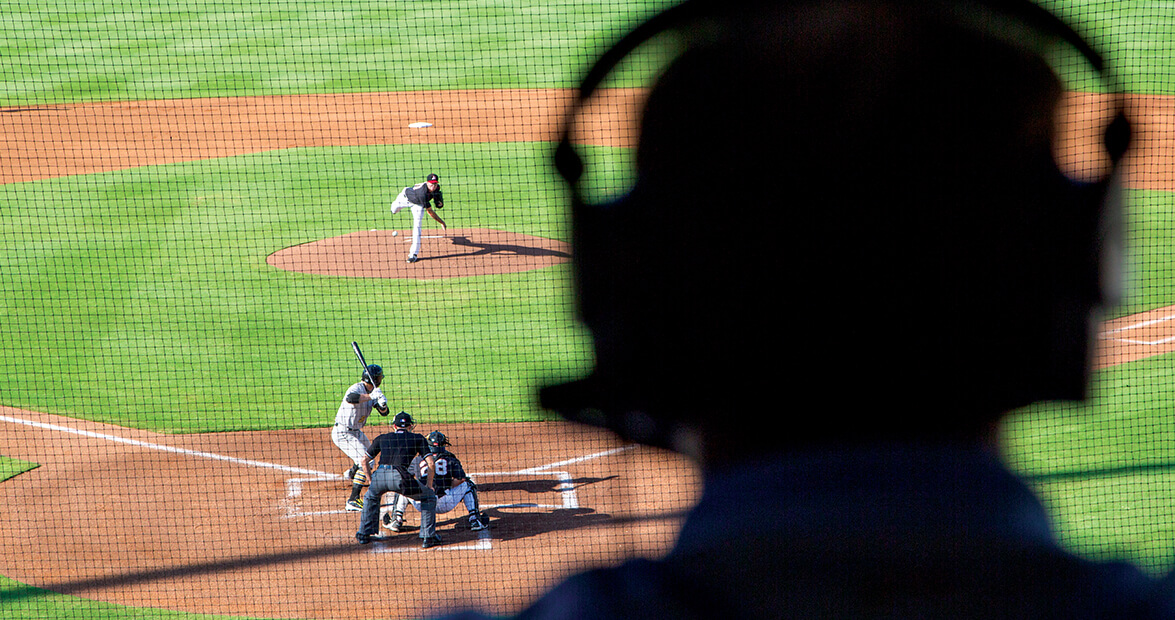 Let me set the scene for you: I’m at Intimidators Stadium in Kannapolis. I’m trying to keep up with Josh Feldman, who’s the Class-A Intimidators’ radio play-by-play man, but also the team’s communications director and general czar-of-all-trades. He’s sprint-walking from the press box to the dugout to the clubhouse and back again. He is a tall man, and I am not, and the whole thing is a blur. In the press box, Feldman bangs on the window, hollers at the radio guys for the visiting team: “Francisco Diaz is hitting .358? What’s he hitting on Sundays?” At the concession stand, he buys a $2 tomato sandwich for a sportswriter. He hustles two copies of last night’s “revised revised” box score — there was some disagreement about an error — down to the Intimidators’ manager, who all season has been growing tomatoes and peppers between the clubhouse and the left-field wall, just out of the shadow of a sign for a major American light beer.

Back in the press box, there’s a crisis: A pregame silent auction is underway, and a player’s mother is bidding against him for his jersey. Neither knows what the other is doing; the player’s got an intern bidding for him, and his mom’s on the phone, complaining that somebody’s bid the price up again. The player wants the jersey for his girlfriend. His mom wants it because she’s his mom. Feldman puts both hands on his desk, looks down at the floor. “Go see if we have a second jersey,” he tells the intern, who’s maybe 20 years old.

“No good,” she tells him, shaking her head. “The mom’s gonna want them all.” 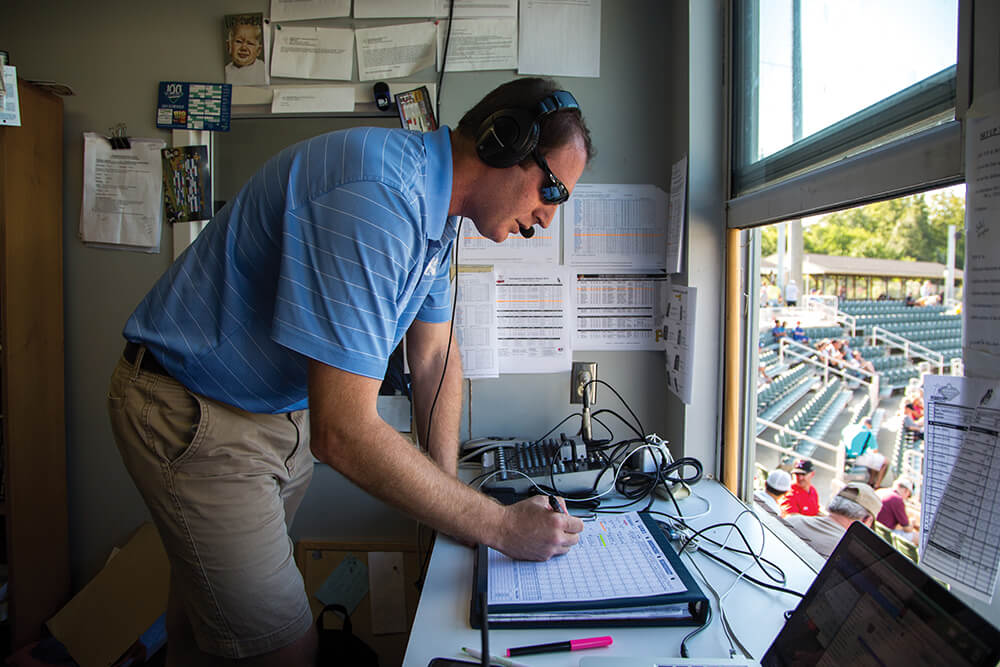 It may not be a corner office, but the view Josh Feldman enjoys at work is tough to beat. photograph by Logan Cyrus

But now it’s game time. The field is green and the sun is lowering into the outfield and the players are warming up. Feldman has to let his few remaining fires burn as they will. He shuts the door, pulls on his headset. There’s a quick moment of quiet. Last night, he tells me, a fan won a year’s supply of toilet paper. It had something to do with a home run in the seventh inning. What the relationship could possibly be between those two things is everything anybody ever needs to know about minor league baseball.

Feldman turns around, opens the window that faces the field. “Good afternoon,” he says, not to me, but to his listeners. “I’m Josh Feldman. I’ll be your baseball tour guide from first pitch to final out.” He ticks through a checklist: First pitch time and temperature, uniform colors, field dimensions. “Let me paint a picture of the ballpark today,” he says, and then he does, and I’m lost, gone, goosebumps on my arms: I’d thought for years that it was my dream to actually call a game. But it turns out that it’s this: I just want to be close to somebody who is. It’s very much like seeing a band you love, live. It’s baseball on the radio, in person.

When I was a kid — Little League age — I listened to Braves games on big old WSB out of Atlanta. I had a red Panasonic clock radio, and I’d dial in Skip Caray and Ernie Johnson and Pete van Wieren, and lie on the bottom bunk of my bed and listen to them call the game from the round stadium in Atlanta, or Cincinnati’s own Brutalist bowl, or Chicago, or New York, or, if I was lucky, Los Angeles. By lucky, I mean: a West Coast game meant that I’d be up until the wee-est of the wee hours. My parents, baseball fans themselves, brooked this violation of bedtime happily enough. Two things I never got in trouble for: staying up late to read chapter books, and staying up late to listen to baseball.

A baseball game on the radio is only occasionally about baseball. It is mainly about rhythm and comfort and the beautiful, improvisational music of somebody telling you about a game where, most of the time, not much game is happening. It’s all negative space and crowd noise, arcane histories and rain delays, and sometimes, sometimes, the crack of the bat.

Maybe because I so often fell asleep to one, a game on the radio feels like prayer to me. God bless Mommy and Daddy and Cinnamon (a crazy Lab we had to give to a farm) and Toby (a calmer Sheltie) and Gene Garber (a Braves sidearm reliever whose son played in my Little League) and Glenn Hubbard (the Braves second baseman, my hero, and a man who once appeared on his baseball card with a pet python around his neck) and the whole of the Braves team, really, so very bad in that era, in desperate need of my prayers and those of anybody else tuning in.

Back in Kannapolis, Josh Feldman is singing along with his own commercials, because, I’m realizing, you have to enter into some kind of zoned-out Zen/freak state — he’s calling the game by himself, and it’s hard to even imagine how difficult that is. He’s literally talking to himself. The color of the bats. Which players wear their stirrups up, which ones don’t. Hometowns. Walk-up music. He pops his finger against the scoresheet with each new batter, each pitch. He’s scoring in pen, one of those four-color ballpoint barrel pens from the 1980s. Between innings, between commercials, I check with him to verify: You’re using a pen? “I don’t make mistakes,” he says.

A ball is fouled back, straight back, bounces off the open window of the guys calling the game for the visiting West Virginia Power. “Oh! It’s dropped! That’s a play you gotta make!” Feldman tells his dozens of listeners. (That’s his guess, not mine.)

I asked him at some point before the game: Who out there besides me is crazy enough to listen to an Internet stream of a North Carolina minor league ball game? Parents of the players, mostly, he told me. Family and friends. So he tries to keep it positive. If a kid’s in a slump, at least he’s hitting it hard. If a pitcher’s getting lit up, at least his breaking ball looks good. That kind of thing.

You have to love minor league ball. You have to. The lights come on and the shadows get long and the Intimidators mascot, Tim E. Gator — heartfelt congratulations to whoever thought that up — is throwing hot dogs in the crowd, while a staffer shoots T-shirts from an air cannon. I’ve maybe never had a better seat for a game. The third base foul line isn’t completely straight. The Power bat around, and Feldman digs through a phone-book-size Sally (South Atlantic League) stats encyclopedia to see when that last happened past the sixth inning on a Sunday. I get a little teary. I do. I’m easy, I admit — I cry at television commercials and national anthems and sometimes during particularly empowering teen-anthem bubblegum pop songs — but there in the booth, that close to the radio, I cry a little bit.

I was still not super on-board with the whole having-a-child thing even in the first weeks after my first son was born. He was born in June, though, in baseball season, and one of the ways I dragged myself toward the kind of reckoning that was required was to sit outside with him on the porch in the evenings, box fan set up next to us to keep the mosquitoes off, and baseball on the radio. Wrapped up in his thin muslin swaddle, he was about the size of a first baseman’s mitt. I learned to love him that way, or at least to start to, or at least to hold him. We would sit out there until it got fully dark, summer-dark, until he fell asleep. I remember the weight of him against my arm. I remember the murmur of the game. I think baseball saved us.

The game winds down and the sun sets and Feldman’s typing and revising the press release for the game even as he’s calling it, changing the score and the story when Kannapolis plates a late couple of runs. He’s becoming the voice inside my head. That’s the thing about play-by-play — you lose yourself, almost your whole self, to the cadence of somebody else’s world. He sees things you don’t. He mentions things you wouldn’t. You are sitting on your kitchen floor at home or out on your porch or driving your car through the North Carolina night, and there’s somebody on the radio, an old friend, somebody welcoming you in, glad to have you along tonight, here’s what you missed in case you’re just tuning in. We are always, all of us, just tuning in.

As I leave, kids are running the bases. The grounds crew is waiting for them to finish. In the run-up to asking Feldman if I could ride shotgun for a game with him, I asked him about radio broadcasts in general. If he was worried that, in the digital age, a game on the radio was too antiquated, too strange, too cute by half. “No,” he told me. “As long as there’s baseball, there will be a broadcast.”

I get in the car to head back home, and I really have only one regret: that the game’s over. That I can’t tune it in for my ride. I pull onto the interstate and aim north, notching my way up the AM dial, knowing that there’s got to be something on somewhere, that it’s just a matter of finding my way through the static. And soon enough, there: a game. Fuzzy, but a game. I don’t have any idea who’s playing. I just know it’s baseball. I roll down the window, turn the radio way up, and drive.