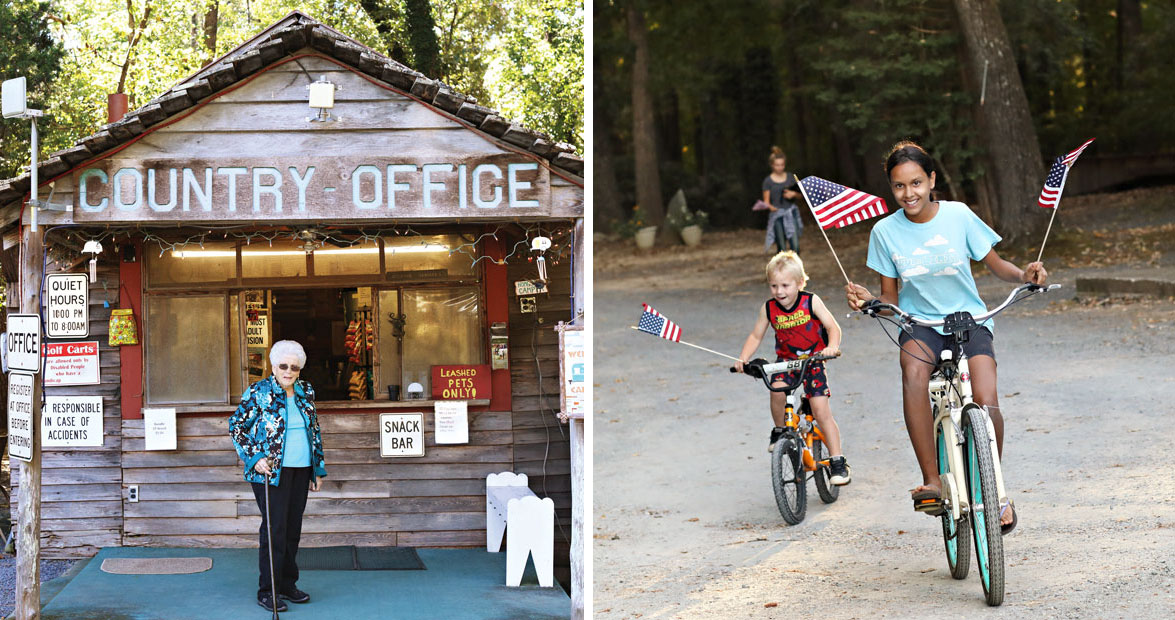 Editor’s note: This story was published in 2018.

The rules at Holly Bluff Family Campground are simple: No swimming in the pool alone. No riding bicycles after dark. No alcoholic beverages. Love your neighbor.

OK, the last one is more of a guideline than a rule, but it’s one that campers have abided by for the past 50 years. As the late Red Hurley, a longtime camper and former campground pastor, used to say: The minute you come through that old rusty gate out there, you become part of the family.

Tony Sparks, another camper and the campground’s current pastor, smiles and says that Ramona Shaw, the proud proprietor, approved of Hurley’s sentiment, but she took exception to his description. The gate’s not rusty, she’d say. It’s painted that way.

Ramona, who turns 88 this year, and her husband, Bill, opened Holly Bluff in 1968 on land that had been in his family for generations. She has run the campground since Bill died unexpectedly on Memorial Day weekend in 1983. Hip and knee replacements and other physical challenges have slowed her gait, so her son and daughter-in-law Kelly and Joyce handle day-to-day affairs now; grandsons Landon Shaw and Tyler Morgan pitch in, too.

In May, the family treated a big crowd to food, music, and hot-air balloon rides in celebration of the campground’s 50th anniversary.

Bill and Ramona married in 1951, settled in Asheboro, and started a family. In the 1960s, they joined the recreational camping craze, always pulling their pop-up camper to a campground in Stanly County.

It was Bill who came up with the idea of building a campground on his mother’s homeplace west of Asheboro. The Shaws hacked down trees and brush to make room for a few campsites around one end of a cornfield. Many of those trees were hollies that stood on the edge of a 100-foot-high bluff, hence the campground’s name. Bill graveled a road. Ramona started planting flowers.

In the early days, most campers slept in tents or pop-up trailers. The few who needed electricity plugged into the main power pole. Later, the Shaws laid water, sewer, and electric lines and built a house on the grounds.

Bill built an amphitheater because he wanted music in his campground.

The first swimming pool arrived on the back of a truck, an above-ground model hauled from an Asheboro motel that was upgrading. The first bathhouse featured secondhand fixtures, discards from an Asheboro factory.

The field filled up — with an arcade, a miniature golf course, and a large shelter called the Red Hurley Center that hosts activities and events ranging from suppers and sing-alongs to bingo and Sunday morning church services. Campers held fund-raisers to help pay for the open-air shelter and then helped buy a sound system.

Camper Brenda Brewer says Ramona is the reason people contribute. “They love what she stands for. She stood on her own two feet and ran this place single-handedly.”

In the early days, Ramona taught Sunday school under the trees by the office. She was also an enforcer of the rules. One night, someone tipped her off that trespassers had scaled the pool fence. She stormed over and roared into the darkness: “Who’s in my pool?” The trespassers dared ask if she could unlock the gates so they could get out. “You can leave the way you came in!” Ramona replied. “One went out the back,” she says, grinning, “one out the front.”

“If you don’t watch it,” she says, as if sharing a truth some might find hard to believe, “some people let their kids run at midnight.”

“She was not scared of the devil himself. If somebody did not act right, she was right up in their face and telling them,” she says.

Travelers come and go from near and far. “I’ve had ’em come in here from California, just to see Richard Petty race,” Ramona says. But the campground’s heart and soul are the “weekenders,” who come most every weekend in season, April through October. 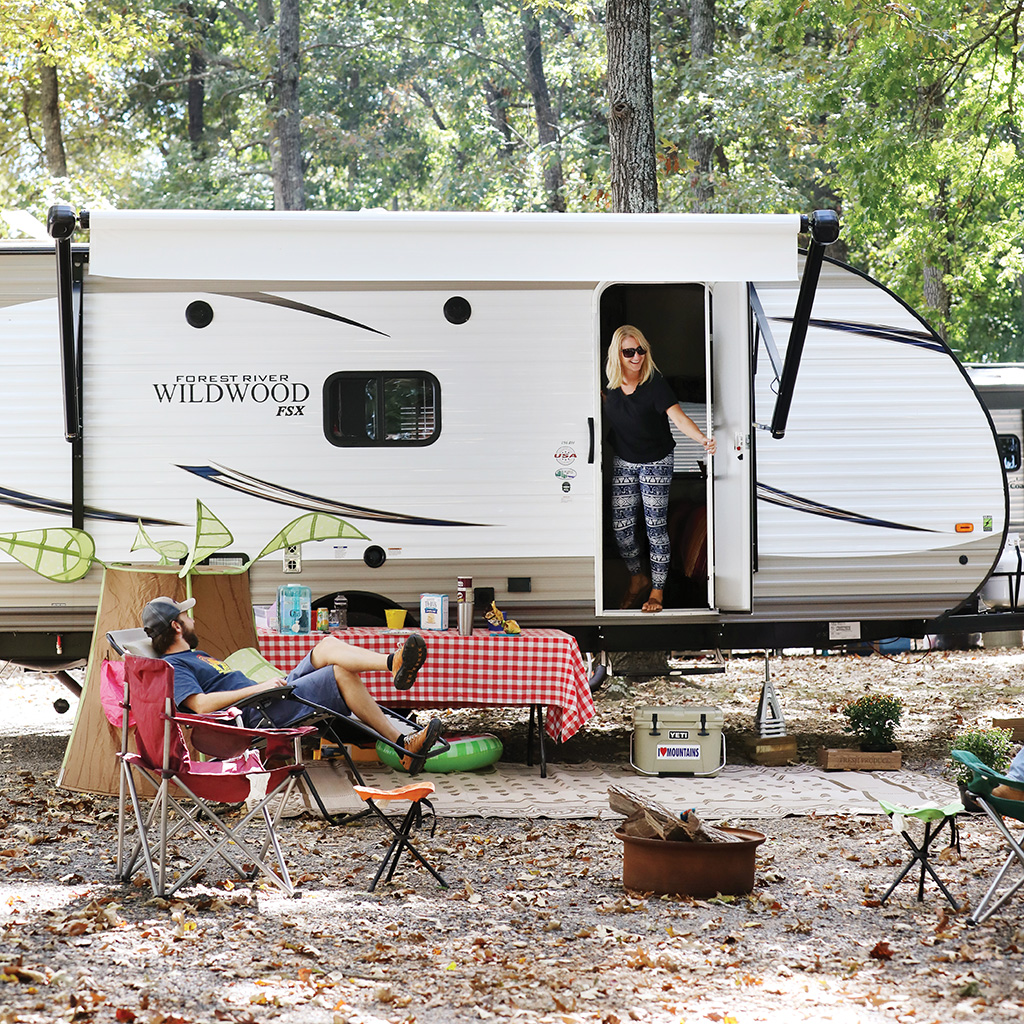 Couples, like David and Manuela Cooley of Lewisville, call the campground home on weekends. photograph by Sara Brennan

Donald and Janice Efird of Albemarle — Holly Bluff campers for close to 35 years — are weekenders these days. They arrive on Friday evenings and head home after church on Sundays.

Non-campers don’t understand the attraction, Janice says. “My mom used to say, ‘Well, what’s going on up there that you have to go every weekend?’”

There is always something to do, but doing nothing — with friends — is a key pastime.

“One thing people don’t think about in this day and time is just being still and fellowshipping,” Brenda says. “It reminds me of the old neighborhoods. You don’t worry about locking your door. You don’t worry about your kids. I’ve seen 2-year-olds running around alone. Whoever’s out there takes care of them. It’s like going back in time,” she says.

“Anybody here gets sick or hurt,” says Daffy McKay of Asheboro, “everybody’s on the horn, checking on them, attending to them, visiting the hospital, you name it.”

The place to be on Saturday evenings is Lot 63, Tony and Belinda Mauldin’s campsite, where a potluck always attracts dozens of folks hungry for food and conversation. On one evening, the pots, platters, and plastic containers cover two eight-foot tables. The fare includes a birthday cake for Parker Reynolds, who will soon be 5.

“Ain’t a bad little spread, is it?” Tony says. “Anybody who walks up, they’re welcome.”

Baylee Montgomery, a college junior, spent almost every weekend of her childhood here. It’s where she learned to ride a bike and to swim, and where she met her first boyfriend. Her half-brother Parker, the birthday boy, gets a face full of icing. Someone is doused with water and retaliates. Several others get wet. Baylee reminisces about hayrides, fireworks, and trick-or-treating. “There is never a dull moment.”

Mike Burkett of Mount Pleasant says some may view Holly Bluff as “a little outdated,” but he sees it as a throwback to the good old days. “When you put up your camper, somebody’s going to say, ‘You need a hand?’ When I was a kid, this is the way camping was.”