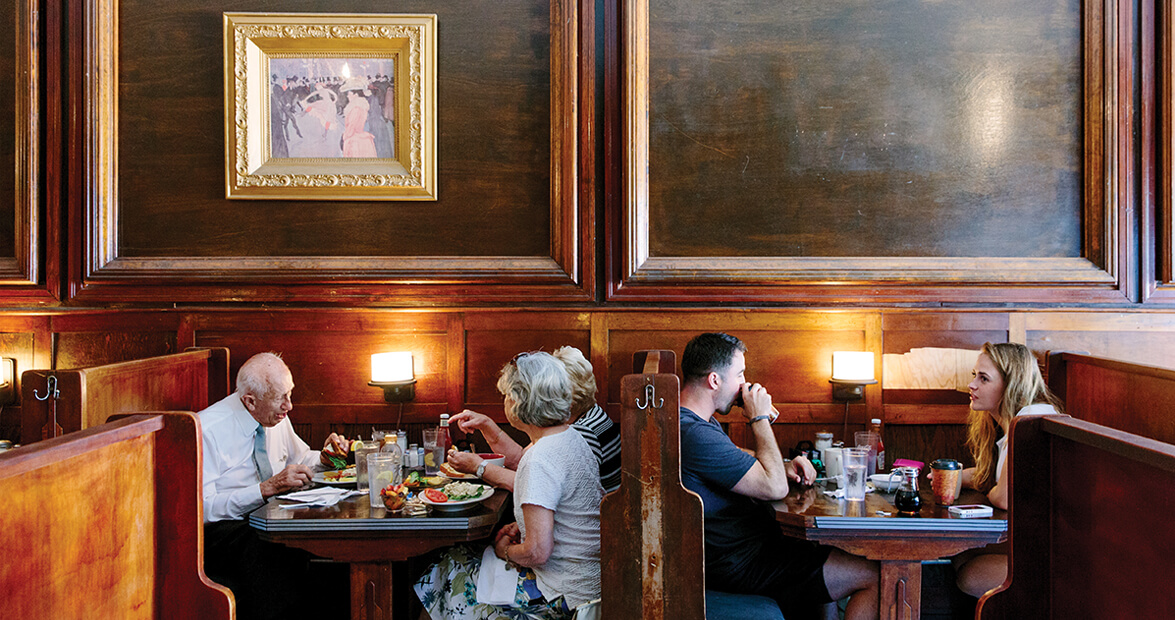 The old wooden booths at the Carolina Coffee Shop are filled with stories.

“The best part of this job,” Jeremy Ferry says, “is hearing the stories. We get them all the time — couples who ate here on their first date or graduates who come back and make this their first stop.”

Ferry is the general manager of the Coffee Shop, the longest continuously operating restaurant in North Carolina, and a Chapel Hill institution since 1922. Just a few months ago, a couple returned to the Coffee Shop and sat in the exact same booth where they had their first date in 1942. On this corner of Franklin Street, this happens all the time. 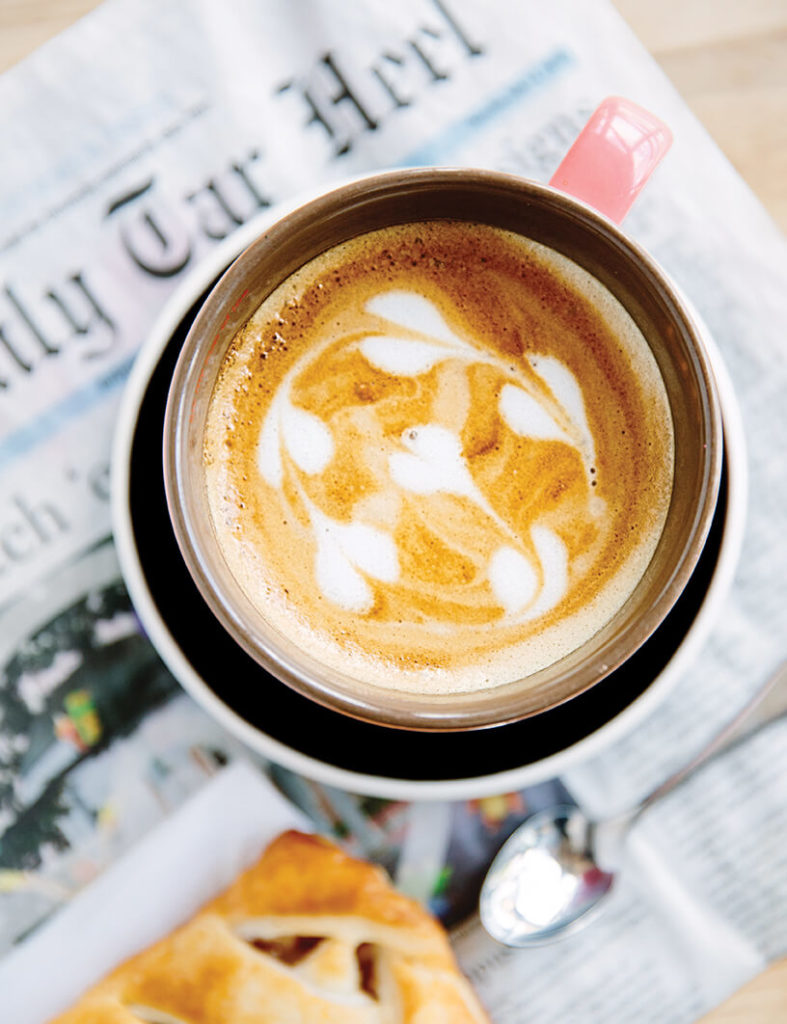 A perfect morning in Chapel Hill: reading a copy of UNC’s student newspaper, The Daily Tar Heel, over a latte at the Carolina Coffee Shop. photograph by Anna Routh Barzin

Not today. This is ours: The pretty young Chapel Hill High School teenager just needed a job.

That’s why Marie Johnson walked the two paved lanes of Airport Road from her home down the street. It was 1946, and she was a sophomore. World War II was over. Chapel Hill was changing, spurred by an influx of servicemen attending college after the war.

Marie’s job — her very first real, paying job — was at the Carolina Coffee Shop. It had started as the Carolina Confectionary, but became the Coffee Shop in 1922. By the time owner George Livas employed Marie in 1946, he’d already owned the restaurant for more than two decades. It was a Chapel Hill tradition before The Rathskeller, before The Porthole, and even before Sutton’s.

“It’s that wood and paneling and the soft, homey feeling. That’s what makes people want to go back.”

It wasn’t trying to be an institution. People needed coffee. George Livas provided it. That was Marie’s job — she poured cups of coffee, which cost a nickel apiece, for a constantly changing mix of students, employees, and natives. Marie marveled at frequently waiting on the famous Charlie “Choo Choo” Justice. She didn’t necessarily like big crowds, but she liked people, and she knew how to take care of them.

It was one of those former servicemen who first mustered the courage to leave her a 25-cent tip. That was big money. But she chased after him, putting the quarter back in his hand. “You need this more than I do,” she told him. 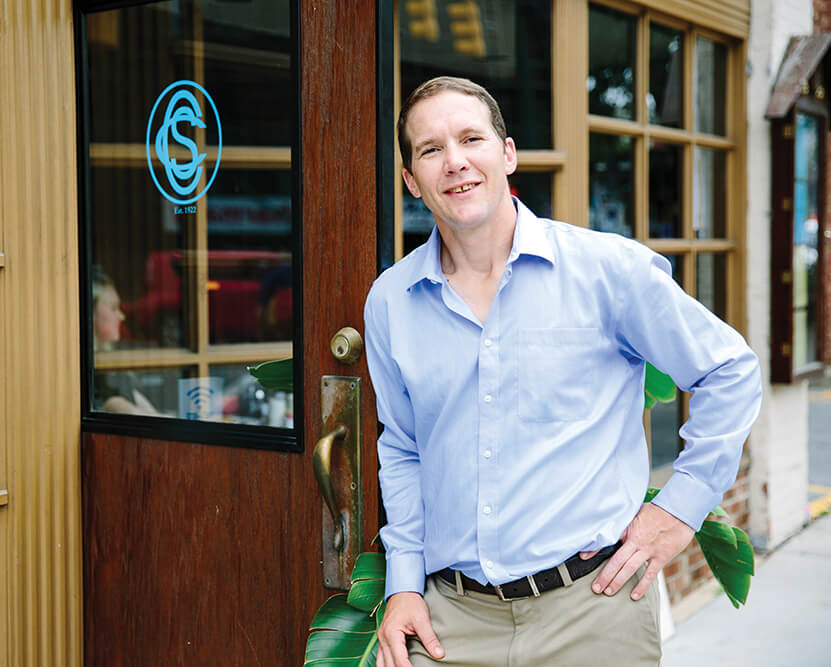 As the Coffee Shop’s longtime manager, Jeremy Ferry knows many of its stories. photograph by Anna Routh Barzin

Maybe he blushed a little. But James Lucas wasn’t deterred. He’d flown 51 combat missions as a tail gunner in a B-24 Liberator bomber in World War II, been honorably discharged, and was attending Carolina on the GI Bill, the only way he could have possibly ever afforded college. He knew about persistence.

He kept stopping by the Coffee Shop. Soon, he earned a date. And on December 23, 1948, Marie and James took the bus from Chapel Hill to Durham, where they were married by a justice of the peace. They celebrated by riding the bus back to Chapel Hill, where their not-entirely-pleased families were waiting.

Less than three years later, my father was born. James and Marie were married for 49 years and two months. The Carolina Coffee Shop, you see, is why I’m here. Literally. If James doesn’t leave Marie that quarter, or if she’s not quite sassy enough — or sweet enough, perhaps? — to give it back to him, then I don’t get to tell this story.

This is familiar territory for Jeremy Ferry.

A couple of years ago, the restaurant held a reunion for employees, and more than three dozen returned. The Carolina Coffee Shop seems to be a place you never really leave.

“There’s something about that atmosphere,” says Eleni Bingham, Livas’s daughter, who worked at the restaurant for several years. “It’s that wood and paneling and the soft, homey feeling. It has that comfortable feel to it, and that’s what makes people want to go back.” 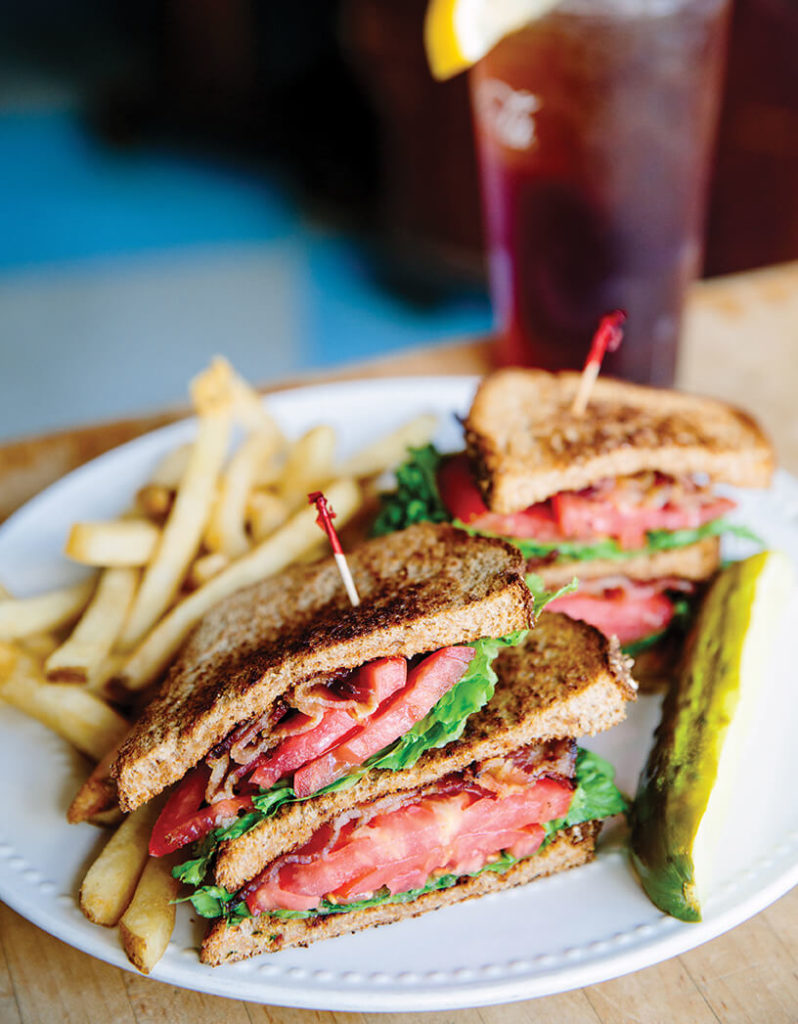 When Livas was the owner, he played classical music throughout the restaurant on a phonograph. That music remained a fixture, which prompted some concern when the Coffee Shop installed two flat-screen televisions in the bar area, even though they’re usually muted. The staff hit upon a compromise — the TVs remain off on Sundays, unless there’s a big Carolina game.

There are always changes being discussed. For more than a decade, the same menu has been used for both lunch and dinner, with few changes. The burgers are a favorite, and the kitchen has been using fresh, local produce since before it was fashionable. Ferry is edging back toward separate menus, and wants to bring back some of the Coffee Shop’s classic dinner favorites, like beef stroganoff and crepes, about which returning guests frequently ask. He’d like to expose a little more of the building’s original brick in the dining room.

There’s a university improvement project underway that will eliminate vehicular traffic through Porthole Alley, which runs next to the restaurant. When it’s finished, Ferry says, he’d like to add a dozen or so outside tables and create some outdoor dining space.

These are big plans, big changes. The restaurant’s 100th anniversary is less than a decade away. There are lots more stories to tell. As Ferry outlines some of his plans, Tchaikovsky plays softly in the background.