Vegetable sandwiches. If you don’t know why they’re important, you’re in good company. Until recently, I had never heard of them either. But some chance remarks at a card game sent me on a trail of detective work that uncovered an almost forgotten part of Charlotte’s culinary history.

To old-line Charlotteans, a “vegetable sandwich” isn’t just a sandwich made of vegetables — like a tomato sandwich, cream cheese and cucumbers, or grilled portobellos. It’s a specific tea sandwich of minced raw vegetables that, for almost half a century, reigned at local luncheons, parties, and receptions. But then Charlotte’s famous vegetable sandwiches faded away. Where had they come from? Why did they go? Are they worth reviving?

My search began when 78-year-old Brenda Campbell asked a simple question during a game of rummy with friends: “Do y’all remember vegetable sandwiches?” I had no idea what she was talking about, but others chimed in with reminiscences. They explained that, decades ago, you would find vegetable sandwiches at events all across town. They were made of finely minced vegetables. Served on white bread. No crusts. No garlic. And bound with mayonnaise. “They were a pain to make,” Brenda said. “You had to chop everything by hand.” 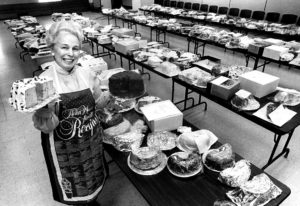 Not only did beloved Charlotte Observer food writer Helen Moore (pictured at a 1985 pound cake contest) pen articles about the famous vegetable sandwich, but she also came up with a recipe of her own. Photography courtesy of THE CHARLOTTE OBSERVER. ©1985 MCCLATCHY. ALL RIGHTS RESERVED. USED UNDER LICENSE

I was curious, so another friend, 88-year-old Jan Thompson, who’s lived in Charlotte since the ’50s, made me some. Spread on thin bread was a mélange of grated cucumber, bell pepper, carrots, celery, and onion. One key ingredient was unflavored gelatin to thicken the spread. After such a buildup, I was underwhelmed. The sandwiches were fresh and light, but I usually like spicy. In 1960s Charlotte, though, plain was popular.

For a time, I forgot about vegetable sandwiches. But that first taste wasn’t the end of my investigation. When longtime Charlotte Observer food writer Helen Moore died in 2020, the paper ran a story by Adam Bell on Moore’s three most requested recipes: Hawaiian cake, pecan chiffon pie, and vegetable sandwiches. “For years, [vegetable sandwiches] were a staple at local weddings and parties, made by a caterer, Eva Tribble Pressly, on Crescent Avenue,” Bell wrote. “Moore worked out her own version of the recipe.”

Most requested? Clearly, I had underestimated these vegetable sandwiches. This was a piece of Charlotte history that was unknown to me. And as someone who grew up in the South with Southern parents, I know many old Southern dishes.

Herb Cohen, 90, remembered them from luncheons at the Mint Museum. “They were absolutely delicious!” he said. Ike Heard Jr., 71, had them at fancy events that his parents made him attend in both the white and Black communities. “Stuff you could eat a lot of, but not get full on,” he recalled.

I found recipes in old Charlotte cookbooks, including the Junior League’s 30th anniversary edition from 1999. Its recipe was much like Helen Moore’s, but added tomatoes. Former Observer food writer and Our State contributor Kathleen Purvis knew about them. “They were a ladies’ club kind of thing,” she said. “They could sit out for a while, and they wouldn’t get stuck in your teeth like parsley.”

“You might call her the fairy godmother of Charlotte’s vegetable sandwich.”

When I pitched my theory that vegetable sandwiches were unique to Charlotte, Kathleen got curious, too, and searched her extensive collection of Southern cookbooks, finding many cream cheese-based vegetable sandwiches but none with only gelatin and mayonnaise. She described them to food writer Ted Lee, who grew up in Charleston and has researched Southern foods extensively. “My hunch,” he told Kathleen, “is that this is a Charlotte-specific thing.”

But that wasn’t proof. For that, Charlotte native Kathy Shonts, 83, offered a tip. As a girl, Kathy would go with her mother to get the sandwiches from Pressly. “You always went to her house on Crescent Avenue to pick up your sandwiches. She had them in a white shirt box,” Kathy recalled, and then mentioned an old newspaper article, which sent me to the archives. There, in a 1979 piece by Helen Moore, was the origin story.

“You might call her the fairy godmother of Charlotte’s favorite vegetable sandwich, an idea born in her kitchen in 1941,” the article began. Pressly’s sister and associate, Dot Thompson, had invented the sandwiches, chopping the vegetables finely and draining them twice, using no gelatin, only mayonnaise. “They went over big,” Thompson told Moore. “People as far away as New York and California called us about making vegetable sandwiches.”

When the sisters sold their catering business in 1975, the recipe went, too, and it remained a secret. Apparently, in re-creating the sandwich, Moore added the gelatin.

Proof at last. Vegetable sandwiches were indeed Charlotte-born, and the city had fallen in love with them. But by the ’90s, the love affair had faded — probably due to the city’s increasingly adventurous palate. Yet in a few kitchens, the vegetable sandwich lives on. They’re served at the yearly Matthews Woman’s Club Victorian Tea, and Kathy Shonts and Jan Thompson still make them at home.

As for me, I’ve since warmed to them, finding the sandwiches light and fresh and perfect for summer meals. I’ve learned that grating is easier, but mincing is preferable. Adding celery and lemon juice perks them up. Better bread helps. I have not yet added tomatoes, but the spread is delicious atop sliced tomatoes. And I’ve experimented with a spicier version, adding raw cabbage, jalapeño, and black mustard seed for 21st-century palates.

Charlotte is now a city of newcomers hoping to feel at home. I imagine that many would welcome a special-to-Charlotte dish, yet some probably spurn the city’s other culinary favorite, livermush. That tells me that the classic Charlotte vegetable sandwich deserves a second act. So get chopping. 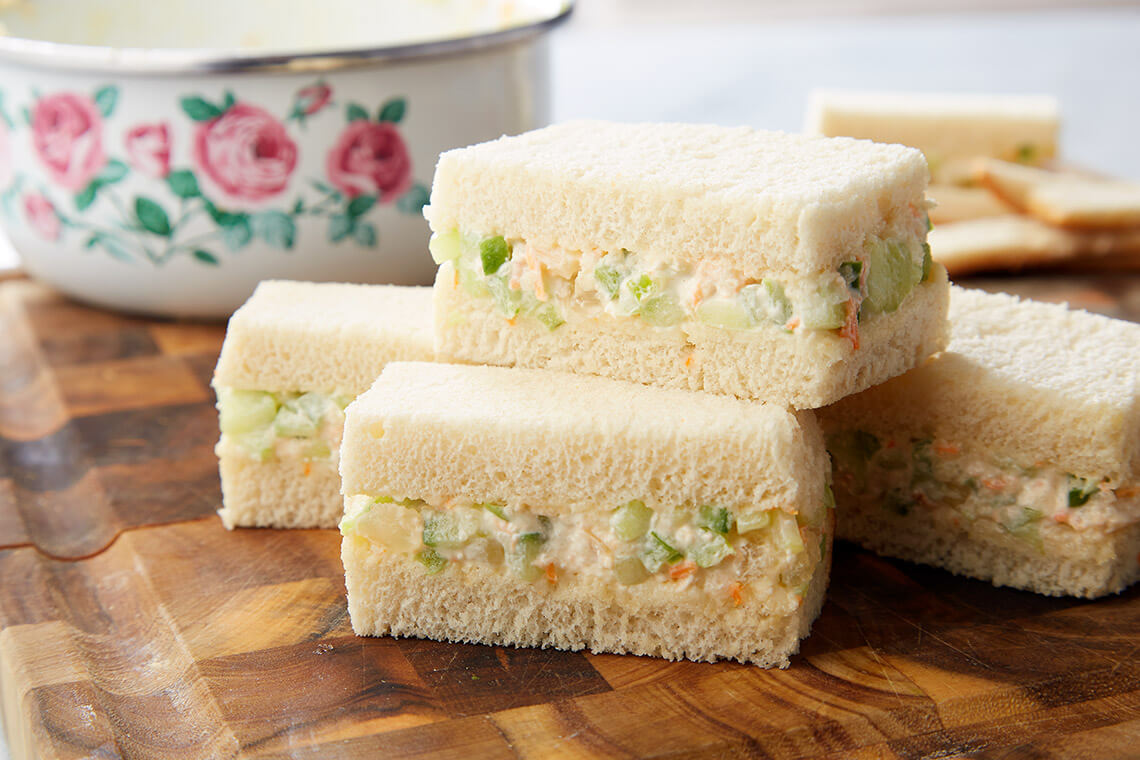 Invented in the early 1940s, these unique tea sandwiches — minced vegetables served on white bread — were such a staple in Charlotte that even Our State (then The State) ran the recipe in April 1965. photograph by Matt Hulsman

Grate or finely mince vegetables. Drain in a sieve over a bowl, pressing out juices. Combine gelatin with 2 to 3 tablespoons of reserved juices. Gently heat until gelatin dissolves. Cool to room temperature. Mix juices, vegetables, mayonnaise, and salt to taste. Chill until firm but spreadable. Spread on half of the bread slices; top with remaining slices. Cut each sandwich into triangles or 3 to 4 finger slices.

Note: Proportions of vegetables and mayonnaise can vary somewhat. Fresh arugula tucked in the sandwich adds a nice peppery flavor.