Roy Willis’s decoy collection tells the history of Core Sound, the narrow body of water that connects Cape Lookout to the mainland. Curlews, dowitchers, and red knots — the waterfowl and shorebirds that locals have depended on for sustenance and sport — are represented in balsa and other woods at the Core Sound Museum & Heritage Center, the building on Harkers Island that relates the stories of those who call the sound their home. The collection of more than 100 artifacts from Willis, a pioneer of the craft and an informal historian who died at 79 after a day of carving with friends, rested in glass cases in what was affectionately known as “Billy’s Room,” the living room in the museum.

Then, in late August 2018, Hurricane Florence, a massive Cape Verde storm, began forming in the Atlantic, and it was charted to make a bullseye of North Carolina’s coast. Some residents packed up and moved inland; others, like Pam Morris, the museum’s exhibitions director, stayed behind to protect their livestock and houses. Everyone knows what happened next: At first a ferocious Category 4 storm, Florence finally landed on the coast as a Category 1, with wind gusts of 106 miles per hour recorded at Cape Lookout, just beyond the sound.

But instead of moving swiftly up the seaboard, the storm settled in and pounded Down East with rain. After 48 hours, Harkers Island had received more than two feet. Winds sheared off shingles from the roof on the museum’s northern side, and all that rain poured down the building’s Sheetrock, soaking its administrative offices and exhibit halls, saturating its carpets, and cascading over the exhibits that had been carefully wrapped in plastic and protected in rubber tubs. Morris and Karen Amspacher, the museum’s stalwart director, were finally able to get into the building days after the rains stopped.

The destruction they found was difficult to comprehend. But as heartbreaking as it was, it marked the beginning of a new chapter for the museum, the sound’s resilient people, and the land itself.

There are two ways to get from the mainland to Harkers Island: on the two-lane road over the only bridge, or by boat. Either way, you’ll at some point end up on Island Road, the paved backbone that runs the three-mile length of the island. The road winds past homes and churches and seafood shacks, under storm-beaten live oak trees that shade the faded asphalt. At the end of the road is the water: the Core Sound, brackish, brilliant at high noon, gray at twilight, and always lapping at the edges of the islanders’ lives. 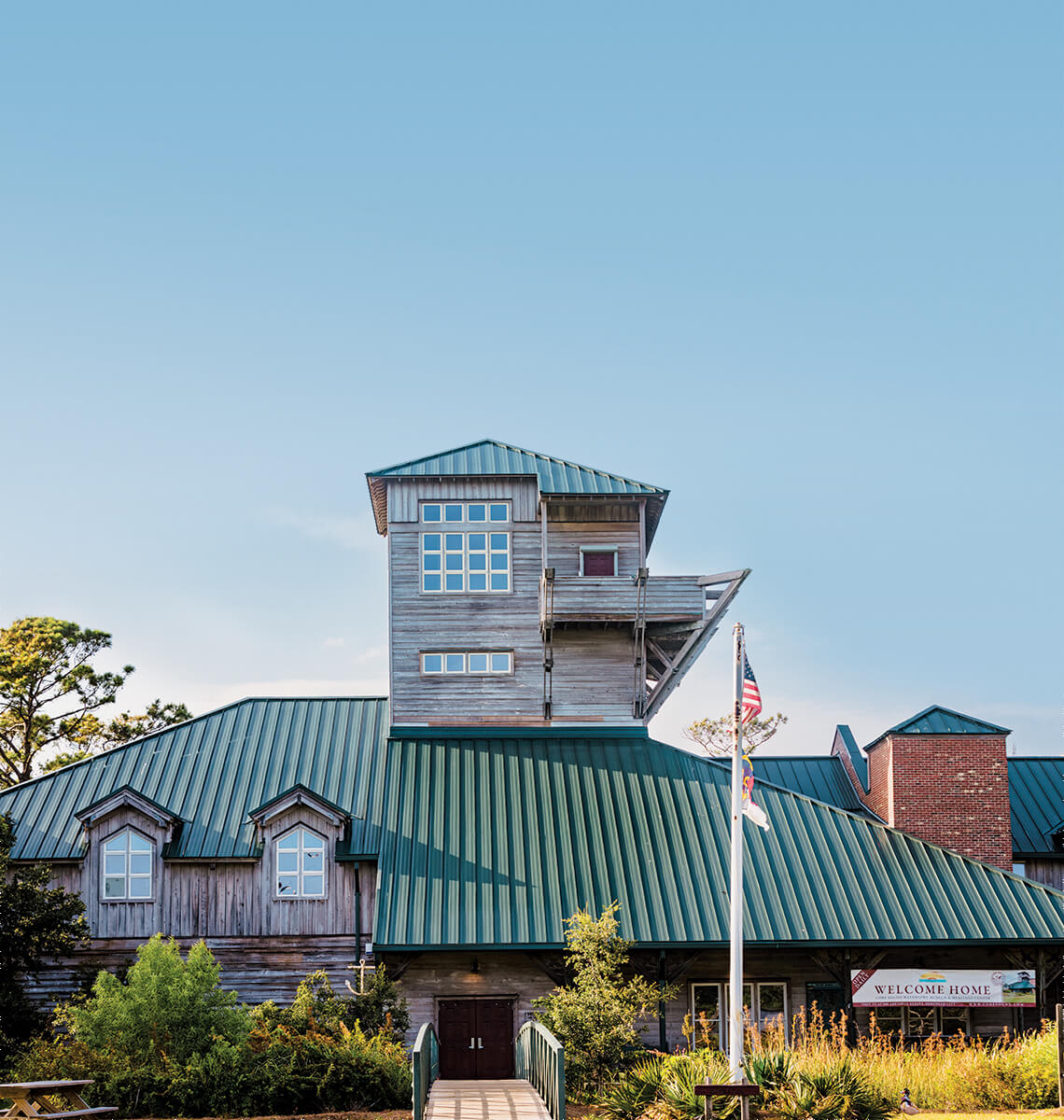 Across Island Road from those waters is the museum, an expansive gray cypress-sided building with an unbridled view of the sound. Nominally, it is a collection of historical artifacts and artwork that tells the story of the Core Sound people’s rich past. But as Down East continues to recover from Hurricane Florence and prepare for storms ahead, the museum has become a source of steadiness for islanders and Core Sounders, and a font of optimism for what is possible after a long recovery.

“I think we have something to prove,” says Amspacher, an island native who has worked tirelessly to establish the museum’s purpose and expand its reach. “It’s not just this museum. It’s not just the island. It’s our community. And so we capture that.”

The museum grew out of the efforts of the Core Sound Decoy Carvers Guild, created to preserve the waterfowl carving heritage that is embedded into the history of eastern North Carolina. But since it opened in 1993, the museum has grown into a deeply rooted historical archive, a science education center, and a community space where islanders gather to remember, to observe, and to celebrate. “Community work and waterfowl are a big piece of it,” Amspacher says of the museum’s purpose. “But it’s also the story that we’ve told about boatbuilding and commercial fishing, and this place and community and storms and lighthouses and lifesaving services. Because at the end of the day, it’s about people.”

After the storm passed, the work began anew. “This whole room was wet,” Amspacher says, standing in the vaulted three-story exhibit hall, now redolent with the scent of new construction. “The carpet was wet from there” — she points — “to there, as well as all the Sheetrock. And then came the mold.”

Willis’s artifacts, the red knot and root head decoys, were safe behind glass, but they needed to be moved. Over the next several months, the museum’s thousands of artifacts and artworks — duck decoys, pieces of island life, decades-old hunting rifles and shotguns — were carefully wrapped by professional art handlers and shipped in 311 boxes and crates to an art storage facility in Charlotte. Then, the building’s recovery began: 75 percent of the Sheetrock was removed, along with 90 percent of the flooring. The renovations, including a new metal roof, mold remediation, and the moving and conservation of thousands of artifacts, cost in the neighborhood of $3 million.

But right outside the museum’s doors was its community: the Ca’e Banker descendants and others who call Core Sound home. After the storm, Amspacher and her staff worked with inland partners to raise thousands for Down East storm relief, providing food and temporary housing to residents and helping rebuild homes. Morris’s home that she shares with her mother needed thousands of dollars’ worth of renovations, which she negotiated with her insurance company even as she tried to wrap her arms around the damage at the museum. 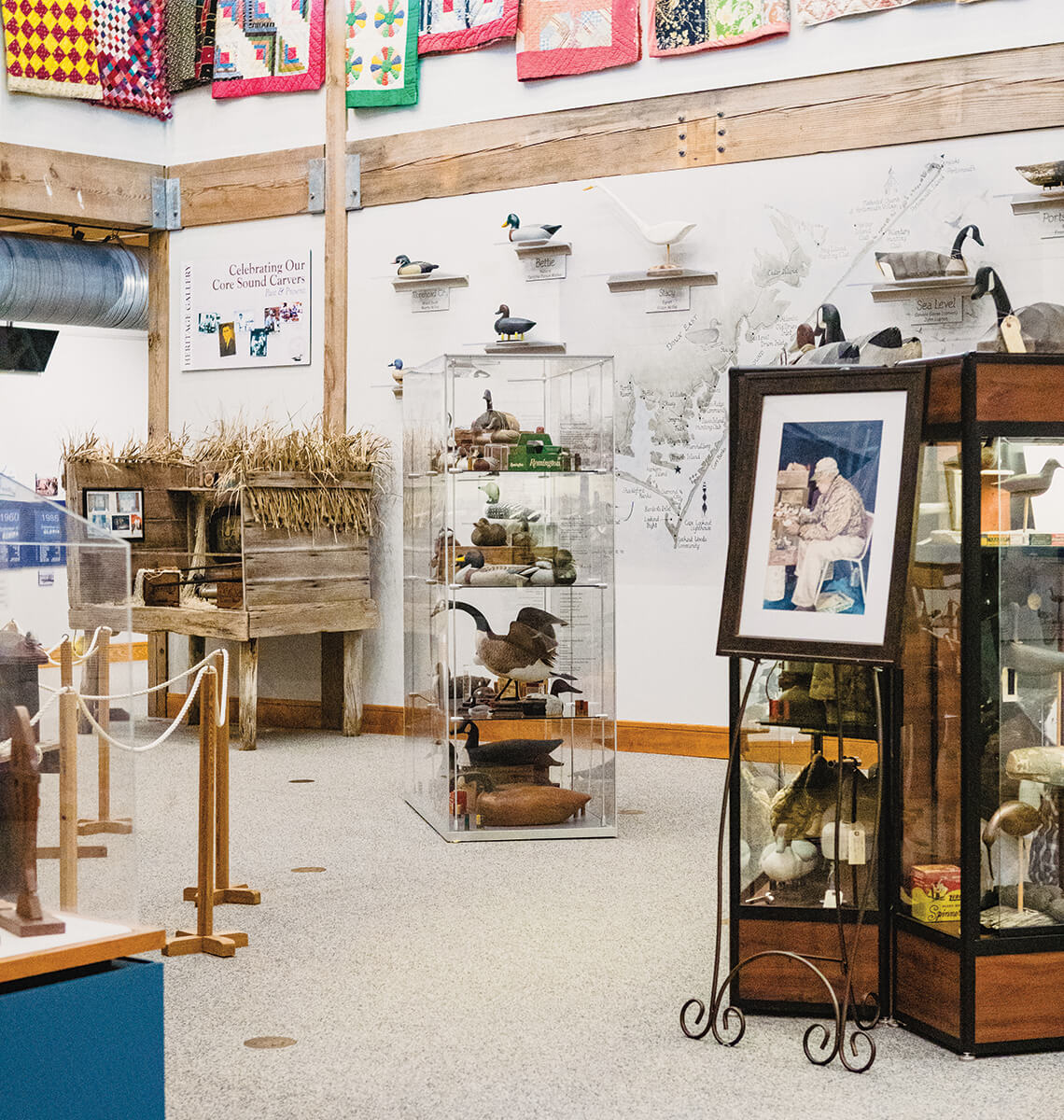 The Core Sound Heritage Gallery houses the museum’s permanent collection of Carteret County cultural artifacts; the hanging quilts are part of a community exhibit on the second floor. photograph by Baxter Miller

That was two years ago. On a more recent Friday morning, the whine of power tools sings out as Amspacher, Morris, and other museum workers bustle around, moving boxes, wielding brooms, and debating what should go where. As the seasons passed over the island, Sheetrock and fresh paint took the place of mold and damage. “We’re getting back into our offices today,” Morris says with glee. Morris, who manages the collections and pretty much everything else, says that when she finally visited her third-floor office after the rains stopped, she found her computer was underwater.

After the mold specialists cleared out and the staff was left to assess the damage, vinyl letters from a former exhibit still clung to one wall: “Response, recovery, resilience.” The staff and the community took that as their creed. “Those words remained,” Amspacher says. “Those words wound over us.” 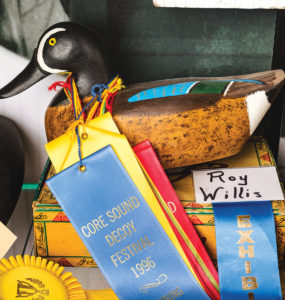 The Roy & Ina Willis Collection at the Core Sound Museum showcases Roy’s shorebird whistles, duck calls, hunting licenses, oyster tokens, and the many awards that he won for his carving work. photograph by Baxter Miller

Willis’s decoys had survived other storms — first Isabel in 2003 and then Irene in 2011, both of which had left the pieces submerged in mud in an old storage room on Willis’s property. In a way, Florence elevated their status: The decoys, packed away with care by the insurance company, were handled and treated as fine art. They, along with the museum’s other artifacts, were returned to Harkers Island in mid-March, when Amspacher and Morris happily got to unpacking. They were eager to rehang a painting by artist Jack Saylor that depicts decoy collection after a hunt. They placed a detailed carving of a tundra swan, a bird that migrates south to eastern North Carolina every fall, back in its rightful spot on the hearth of the museum’s fireplace.

Although Covid-19 put the museum’s plans on hold, it has now reopened, following social distancing guidelines, and the staff has been able to get back to the work they love: telling the story of Core Sound and its people, its duck decoys, its waterfowl heritage, and its communities that look out for each other. The island’s 1,200 residents will face more storms, and they will pull together. Harkers Island is home, and most would not have it any other way. “To me, home is born in you,” Amspacher says. “We use that quote from Wallace Stegner a lot: ‘Tell me where you’re from, and I’ll tell you who you are.’ That’s very true here.”

“‘Tell me where you’re from, and I’ll tell you who you are.’ That’s very true here.”

Up in the museum’s lookout tower, the view is profound. Past the live oaks and the Cape Lookout ferry landing is the sound, hemmed for miles by Shackleford Banks, where the wild ponies roam. Beyond that is Cape Lookout, where, even on cloudy days, the 163-foot-tall lighthouse punctuates the sky. And always, always, there is the water — the gentle lapping at low tide, the whitecaps on a windy day, and the roar of the open Atlantic.

Amspacher leans on the tower’s railings and tells of her roots: Her grandmother was born over on the banks, and her family migrated across the water around the turn of the 20th century. Her Down East accent strengthens as she describes her home. “I’m proud that my crowd came from the banks and carved out a life from all that sand,” she says. “I’m proud that I grew up in a community where if someone was in trouble, they took care of them.” She lives in Marshallberg now, after years up in Boone, with a daughter on the island and a son in Brooklyn.

For now, the wind blows gently, even as a pandemic and yet another hurricane season are upon us. Even before the coronavirus came ashore, Amspacher and Morris — and all who support and love this museum — saw their work as the dawn of a new day, a chance to reset the museum for a new generation, to create new exhibitions and engage a new audience. To establish a sturdy new home for a history long in the making.
“The storm has been a very deep experience, as a person and a family — a community,” Amspacher says. “I’ve never been more proud to be part of this museum, knowing that the work of my people is finally getting its rightful place in our state’s history.”