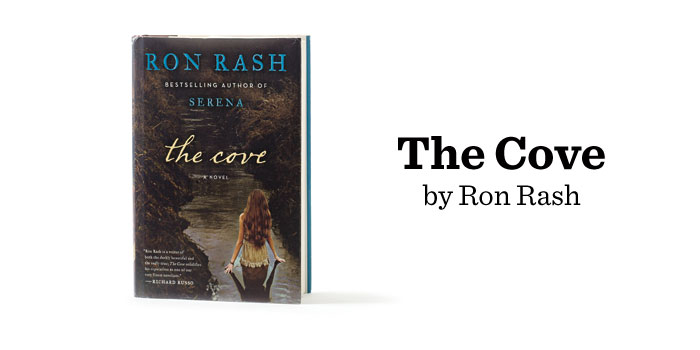 Near Mars Hill, there is a cove whose darkness and isolation seem to curse its inhabitants. For Laurel Shelton, a young girl living in the cove with a brother who just returned from World War I, this curse marks her as a witch. When Laurel nurses a traveling musician back to health, she dreams of following him to New York, and for a short time, it seems that Laurel will attain happiness and break the curse. But the truth of her lover’s identity and the fervor of WWI whip a young Army recruiter into a frenzy, and the ensuing violence traps Laurel and her lover in a web of misguided patriotism that even love cannot endure.

As readers have come to expect, Rash marries a tightly plotted story with lyrical stylings that evoke the character of an old-time Appalachia that has mostly disappeared. The Cove is a quieter book than his previous novel Serena, less sweeping in its scope. This is not a failing, however, as The Cove chooses focus over epic portrayal, and the effect is a moving story of hope and love crossed with the superstitions of the time. The Cove may make the reader question whether we have left such old-world beliefs behind and whether love really does conquer all.

In the end, Rash, like any good writer, offers no answers. What he gives is a good story, wrought with nuanced skill and grace, as he lets the reader make of it what she pleases.