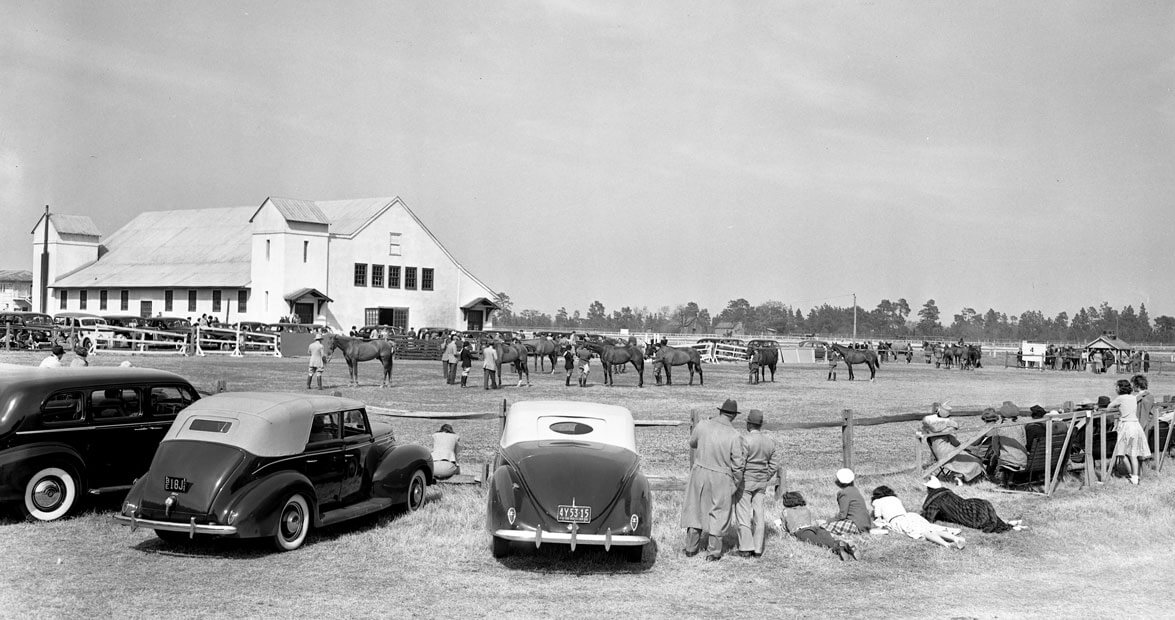 Take your Angus Barn and your Pottery Barn. Your Dress Barn and Fabric Barn. Those names pretty well suggest what goes on inside them. So, when you hear the name “Fair Barn,” it’d be, um, fair to assume that this particular barn is pleasant, like fair weather, or even, in these contentious times, “fair,” as in sportsmanlike, or honest, or legitimate. In the case of the Fair Barn in Pinehurst, the name refers to what most North Carolinians associate with the word “fair” — the county kind, with twirling rides and candy apples, shooting galleries and sawdust.

Built in 1917, the Fair Barn is the oldest surviving early 20th-century exhibition hall in North Carolina. It once anchored the Sandhills Fair, where the surrounding community would gather to peruse livestock and homemade goods, watch blue-ribbon contests and agricultural displays, and, no doubt, hear some speechifying by local bigwigs. Back then, long skirts swished and suspenders snapped within these wooden walls, and the name Fair Barn was literal.

From the outside, though, the place doesn’t resemble a barn so much as it does a Spanish mission church. The exterior is a creamy stucco-like material, not wood. The roof is slate. And the window and door trim and gutters are a milk-chocolate brown. In the four corners are the kind of towers you’d more likely see on a cathedral. At either end are what could be rose windows if they had elaborately designed stained-glass panes. Perched on the top is a cupola that brings to mind a steeple, but probably held a weathervane at one time.

And yet, every detail is as historically and architecturally accurate as possible. Joyce B. Franke made certain of that. Franke moved to Pinehurst from New Jersey in the 1970s, was charmed by the village’s environment, and became determined to preserve and enhance it for generations to come. She cast her eye on the Fair Barn, which, by that time, had grown sadly decrepit.

Once the Sandhills Fair got too big for its Fair Barn, the Fair Barn got a little forgotten. In 1932, a tornado ripped off one of the towers. Repairs were made, and the Fair Barn became, over the next 60 years, a bona fide horse barn for Standardbred horses. By 1992, the once-glorious Fair Barn had a dirt floor, exposed wood walls, and bare roof trusses. It was essentially useless. The following year, Franke founded the nonprofit Pinehurst Historic Preservation Foundation (now Village Heritage Foundation) to raise funds to restore the structure. The building was once a resource for the community — why not rehabilitate this asset and return it to the community?

“A lot of people thought she was crazy,” Franke’s daughter, Beth Franke Stevens, says of her mother, who died in 2014. “She was a stickler for details and making sure that everything was done to the highest standards and the greatest quality possible. So many details in that barn are the result of her doing research on what had been authentic.” In October 2002, nearly a decade and $2 million after Franke began the project, the new Fair Barn opened for its first event. By sheer serendipity, it was the Frankes’ 50th wedding anniversary.

“What you see when you go into that building is what you would have seen 100 years ago.”

“What you see when you go into that building now is pretty much what you would have seen 100 years ago,” says Alan Stagaard of the Pinehurst architectural firm Stagaard & Chao, which assisted in the project. But for the huge screws and bolts and rivets, the interior — its walls and ceiling — is entirely wooden, the longleaf pine boards a natural hue falling somewhere between honey and amber. A smooth concrete floor, tinted to match the walls, takes the place of the packed dirt that once bore the half-moon shapes of hoofprints.

Double rows of thick square columns running the length of the building give a clear indication of where the 16 horse stalls were located. A display of black-and-white photographs shows the lofts that were once above the stalls. One side of the building held hay; the other, rudimentary living quarters for stable hands, including cots and a footed bathtub with no room for modesty. Now that the lofts are gone, the current interior space is high and airy and open, with skylights that run the length of the roof’s apex. At the rear remains a balcony, where couples pose for pictures and brides throw their bouquets. 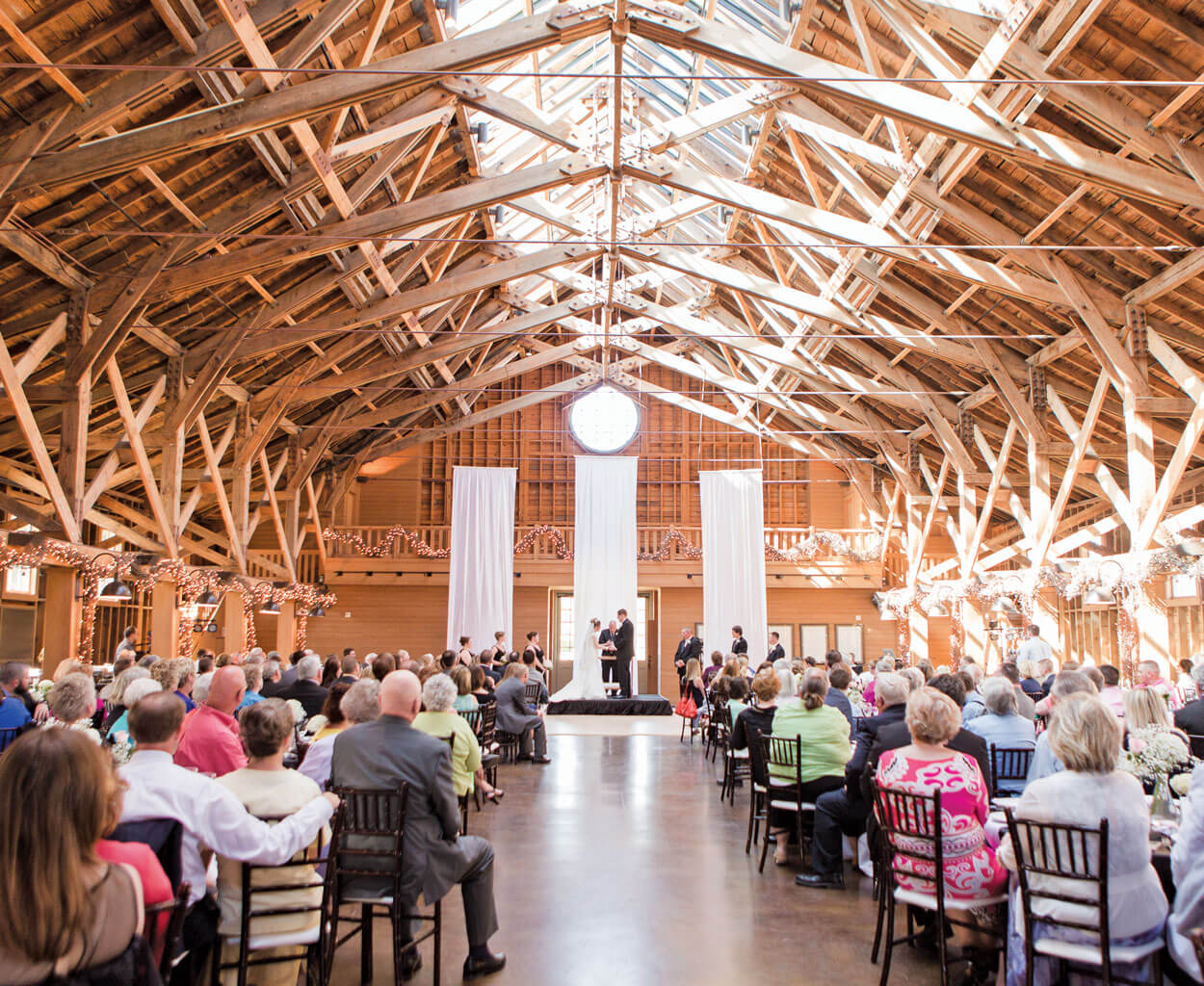 A skylight runs the entire length of the Fair Barn’s roof, providing weddings and other events with ideal natural lighting inside the 7,000-square-foot space. photograph by Jamie Blow

In its third iteration, the Fair Barn today is a venue suitable for almost any event, with its more than 7,000 square feet accommodating up to 800 folks. Weddings, for sure, but also theatrical presentations (Shakespeare in the Pines), concerts (Both Sheryl Crow and The Avett Brothers have played here), fund-raisers, wine tastings, proms, galas, community breakfasts, and other events that require a stage or an industrial kitchen. Outside the wide double doors, which once permitted carriages to enter, is a 38-by-75-foot patio area and lawn for cocktails, graduation dances, and ceremonies. Depending on the season and time of day, you may be treated to a high-stepping steed pulling an old-fashioned, big-wheeled buggy, since not 20 feet from the barn is the Pinehurst Harness Track, a site dating to 1915 and listed on the National Register of Historic Places. On three sides of the barn are 110 acres given over to horses and horse racing.

Horse barns. Hay barns. Dress, Pottery, or Angus barns. And in Pinehurst for the past 102 years, the historic Fair Barn. Step inside. Its sweet sensory memories — cotton candy, lemonade, chess pies — may make this barn, well, the fairest of them all.