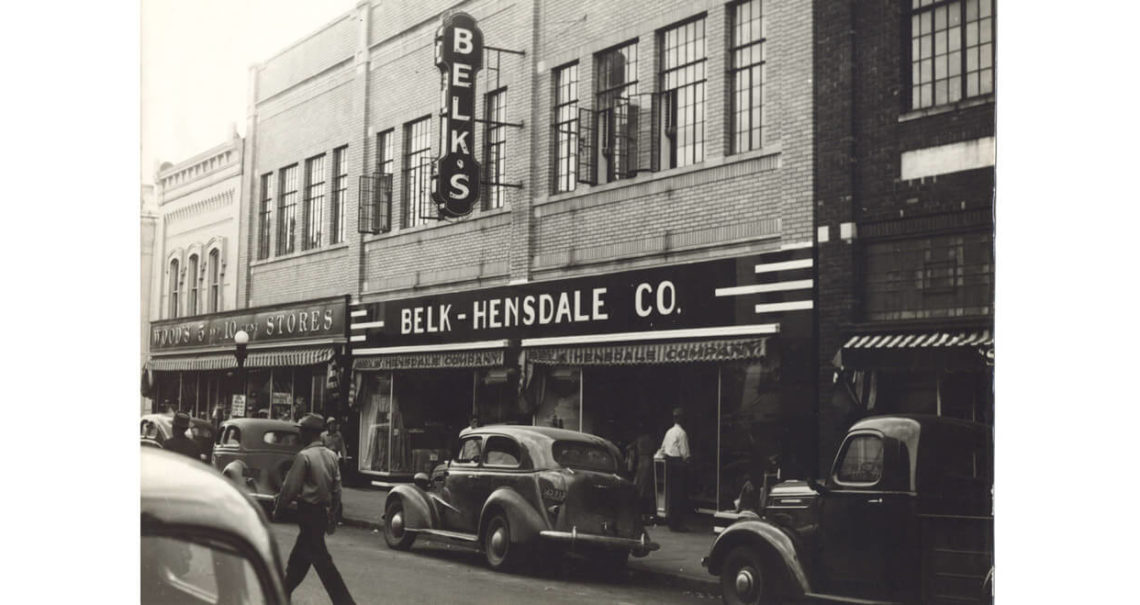 Belk-Hensdale was the place to shop in Lumberton, the small town in southeastern North Carolina where I grew up in the 1960s and early ’70s. I worked in the boys’ department during my high school days.

J.W. Hensdale, the gentleman whose name also adorned the front of a much larger Belk store in the nearby city of Fayetteville, scared me. He was gray-haired, bespectacled, and he rarely spoke to me. When he did, he never said anything unkind, but, in my teenage mind, he was impossible to please. Whenever he was about, I felt inept and was certain that Mr. Hensdale was watching my every move and comparing it to some unachievable ideal in a company manual I had never seen. But I also vividly recall the day when Mr. Hensdale appeared out of nowhere and wordlessly set to work helping me reorder a table of slacks a customer left in a jumble.

Today, I know that Mr. Hensdale was watching me, and everything and everybody in his stores, in Lumberton and beyond. I didn’t know it at the time, but J.W. Hensdale was one of a small army of men across North and South Carolina who were handpicked by William Henry Belk and his brother, Dr. John M. Belk. They welcomed them as partners in a retail shopping enterprise that spread across the South after William Henry opened his first store in Monroe in 1888.

The brothers selected sober, hardworking, church-going men like themselves to open, manage, and share ownership in a string of stores that constituted a system that was different from the typical store chain. It was, in fact, not a chain. Each store was autonomous — and most were corporate entities — with the right and responsibility for buying and marketing its own merchandise tailored to the needs of its unique customers. The concept worked.

Upon the 50th anniversary, Belk stores employed more than 5,000 and posted annual sales of more than $27 million. In a special section in the November 1952 issue of The State magazine (predecessor of Our State), Henry himself described the system:

“We weren’t trying to build up any big system of stores. We took advantage of what we considered good opportunities, in towns that we figured would be good places for locating our stores. We would have a smart, aggressive young fellow, ambitious to move along and do better than he was doing as a clerk, who would want to start out for himself. Well, when we had one like that, we’d back him. Maybe he had saved up a little money that he could put into the business. We’d lend him some more to put in, and we’d put up some of the money ourselves. Or we’d arrange it so that he could buy stock and pay for it as he made the money.”

In 1952, at the time of Henry’s death at age 89, North Carolina was home to 110 Belk stores — many of them bearing hyphenated names — and there were some 200 other stores across the South, as far west as Arkansas and Texas. Today, there are 306 stores in 16 Southern states (and 70 in North Carolina), making Belk Inc. the largest privately owned mainline department store company in the nation. The company employs approximately 23,000 people in stores, corporate and division offices, and distribution centers. Last year, revenues totaled $3.35 billion. The typical store is located in an open-air shopping center and is 60,000 to 90,000 square feet — 40 to 60 times bigger than Henry’s original 1,500-square-foot store. Some are smaller; some larger. The flagship SouthPark store in Charlotte covers 330,000 square feet on four levels. 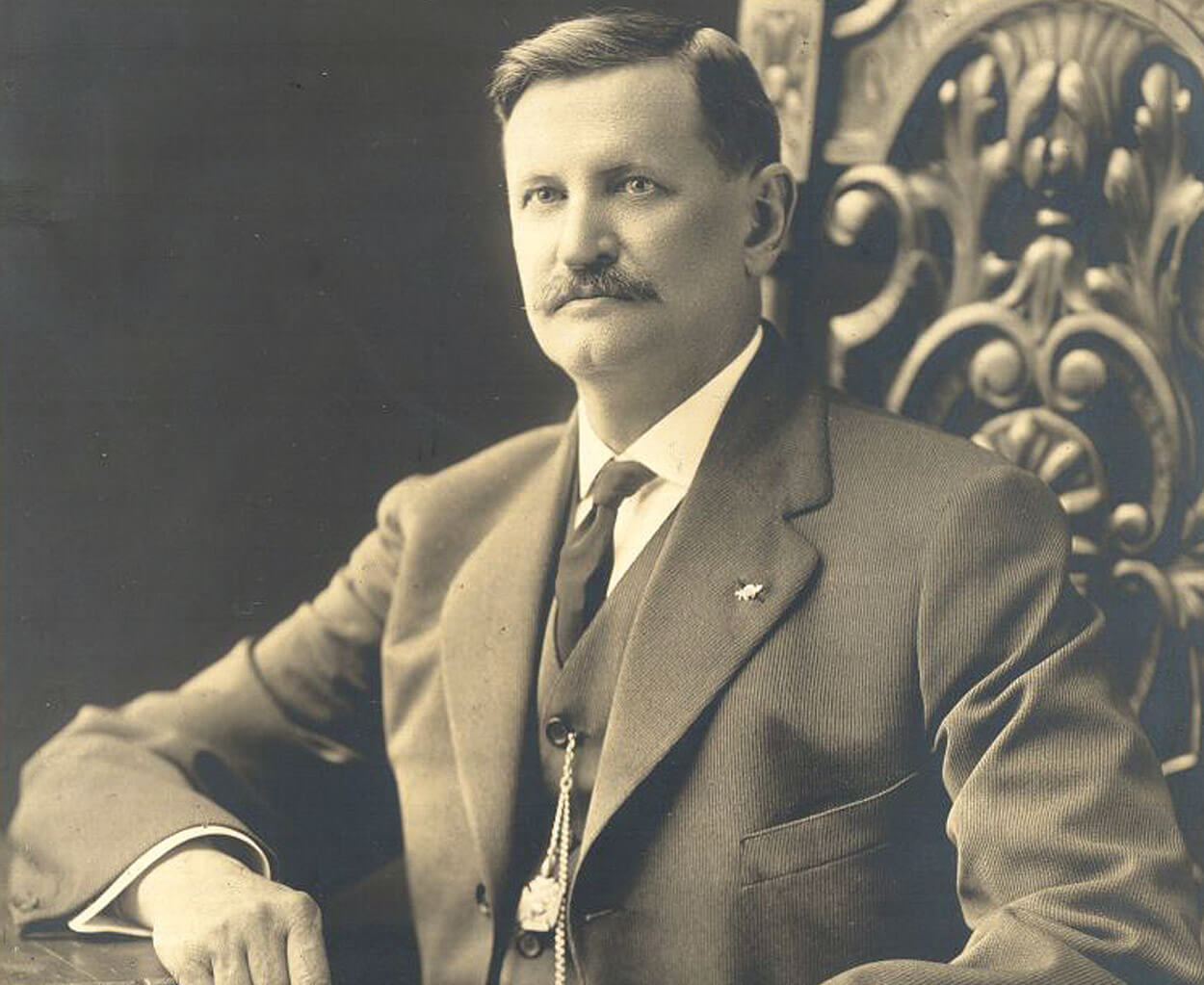 Henry Belk wanted to be a merchant from the first time he saw stores on his first trip into town as an 11-year-old. photograph by BELK INC.

Henry was 14 when he started working in a Monroe general store. At 26, he had saved $750 and was ready to open his own store. He borrowed $500, rented a small space, and stocked it with about $3,000 worth of merchandise on consignment from a store that went bankrupt. He called his enterprise New York Racket. In 19th-century America, “racket” referred to the dry goods trade. Belk tacked on “New York” for an air of sophistication, although there was little sophisticated about his simple operation: bolts of cloth, brogans, denim overalls, and such, neatly displayed in a narrow storefront just 22 feet wide.

What set the store apart were some unusual retail practices for the South. Henry did not offer credit; all sales were cash. He wasn’t financing customer debt, so Henry had money to buy large lots, which he sold with a minimal markup. He advertised his enterprise as “The Cheapest Store on Earth.” There was no haggling over price, another common retail practice of the day. He also offered a money-back guarantee.

In less than seven months, the young shopkeeper repaid his debt (along with 10 percent interest) and netted $3,300. Three years later, he convinced his brother, John, to give up medicine and join him. They renamed the venture Belk Brothers Company and in 1893, opened a second store in Chester, South Carolina. Dr. Belk managed the Monroe store until he died in 1928. Henry moved to Charlotte when they opened their fourth store there in 1895, and the city became — and still is — the base of operations for the company.

Henry divided his energy between his business dealings and his church. Until his mother died in 1932 at age 93, he attended Sunday services with her at First Presbyterian Church in Monroe. Later, he spent his Sundays at Caldwell Memorial Presbyterian Church in Charlotte. According to Belk Inc., The Company and the Family that Built It by Howard E. Covington Jr., Henry sometimes picked towns based on the business climate, which he surveyed during a visit on Saturday, and the preaching at the local Presbyterian church, which he assessed the following day.

Covington writes that Belk was known to give children a dollar if they could recite the catechism, or Presbyterian creed, doubling the payoff if they could say the “Shorter Catechism,” (named not for its length, but for its writer). He sometimes bought lots for fledgling congregations and often donated the bricks to build the churches. 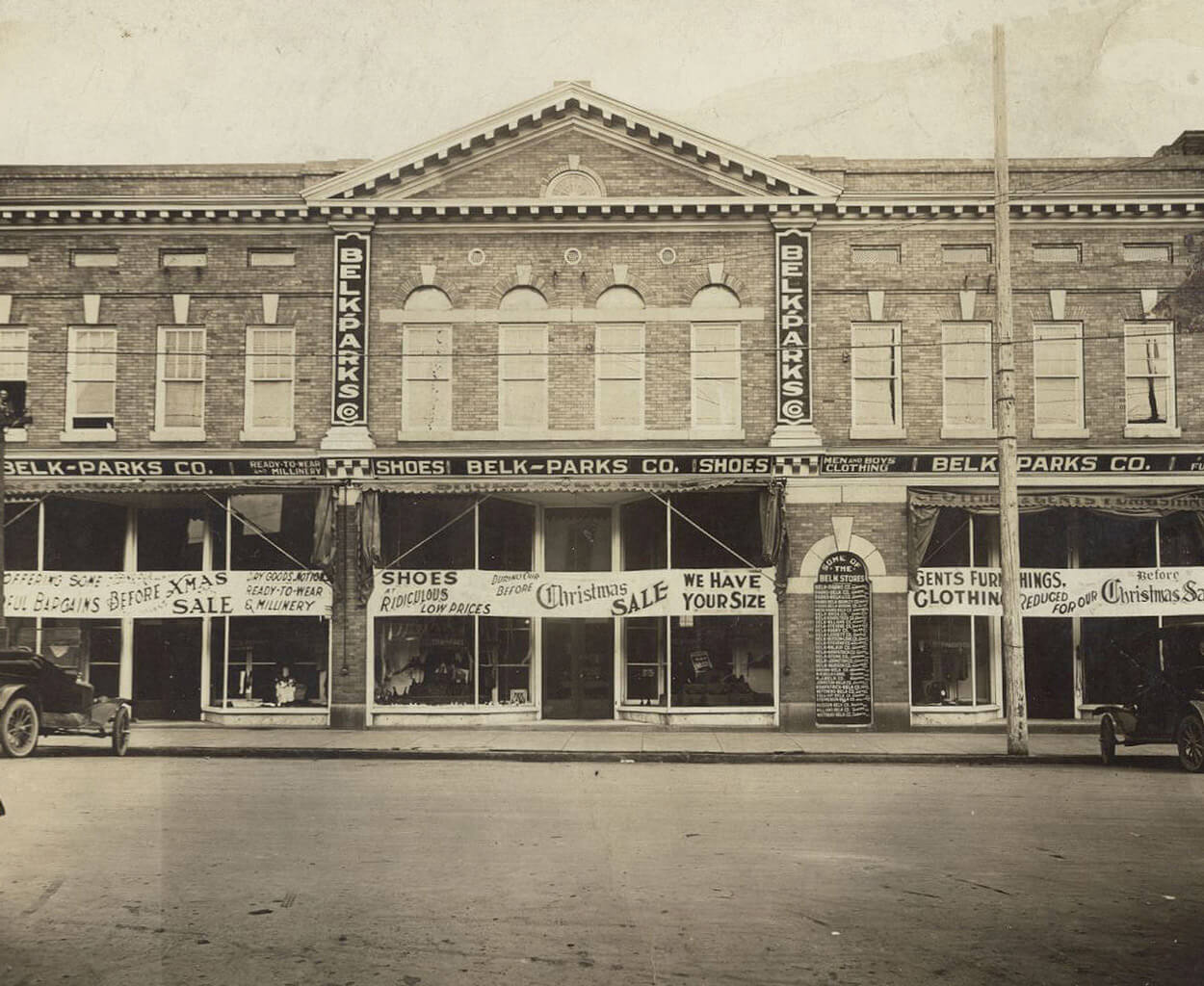 Belk-Parks Co., the first Belk store in Albemarle, opened in June 1917 on South Second Street. A 1920s photograph of the storefront illustrates one thing in retail that hasn’t changed; signs promise low prices and a large variety just in time for Christmas. photograph by BELK INC.

Growing with the South

A Belk has been at the helm since day one. Two of Henry’s sons — John M. Belk and Thomas M. (Tom) Belk — led the company for more than half a century. Tom, longtime president, died in 1997. John, a four-term Charlotte mayor, retired as chairman and chief executive officer in 2004; he died in 2007.

For much of the company’s history, Belk was a Main Street merchant that sold quality goods at good prices, including exclusive store brands such as Archdale, Heiress, and State Pride. “We were regarded as a place to go to get values and bargains,” says Darrell Williams, Belk’s manager of executive communication. But the store changed as times changed. For example, dry goods and sewing notions — a Belk store staple — were phased out in the late 1970s because women had largely stopped making clothes for themselves and their families. “As the South grew and prospered,” Tim says, “Belk changed its mix.”

Tom Belk courted top vendors to add high-end brand names to the inventory, earning the retailer a reputation as a fashion leader among department stores in the South. Some decision-makers for national fashion labels were slow to join forces with a group of stores in the South, but over the years, Tom forged alliances with most of them. One, however — the men’s Polo line — eluded him. But Tom persisted.

Finally, a Polo executive told Tom he would not put the Polo line into Belk stores until the New York Giants won a Super Bowl — which, given the football team’s record at the time, was akin to saying “when hell freezes over.”

When former University of North Carolina at Chapel Hill linebacker Lawrence Taylor helped the Giants win the Super Bowl in 1987, Tom recalled the promise. He contacted Polo and soon had the line in his stores.

In 1970, the Belks and Iveys, another well-known retail family, teamed up to build a sprawling shopping mall called SouthPark in a former cow pasture on the outskirts of Charlotte. Soon, Belk stores in other towns and cities moved to shopping centers or malls away from city centers.

Another company tradition ended in 1998 when 112 separate Belk corporations merged to form Belk Inc. The founding philosophies worked well when towns were small, tastes were simple, and competition was local. But the global scope of the modern marketplace demanded a unified corporation with centralized decision-making and greater buying power.

Through all the changes, however, the company’s commitment to community remains steady. Since 1928, The Belk Foundation and its predecessor, the John M. Belk Memorial Fund, have supported a variety of causes. The April 1952 edition of The Presbyterian News reported that the foundation helped establish 335 Presbyterian churches and manses in the South. Dorms, chapels, and other edifices throughout the Southeast bear the Belk name.

In the mid-1960s, Tom and his brothers, Irwin and John, helped create the University of North Carolina at Charlotte. John Belk pledged $28 million to a scholarship fund at his alma mater, Davidson College. Today, The Belk Foundation focuses on education. 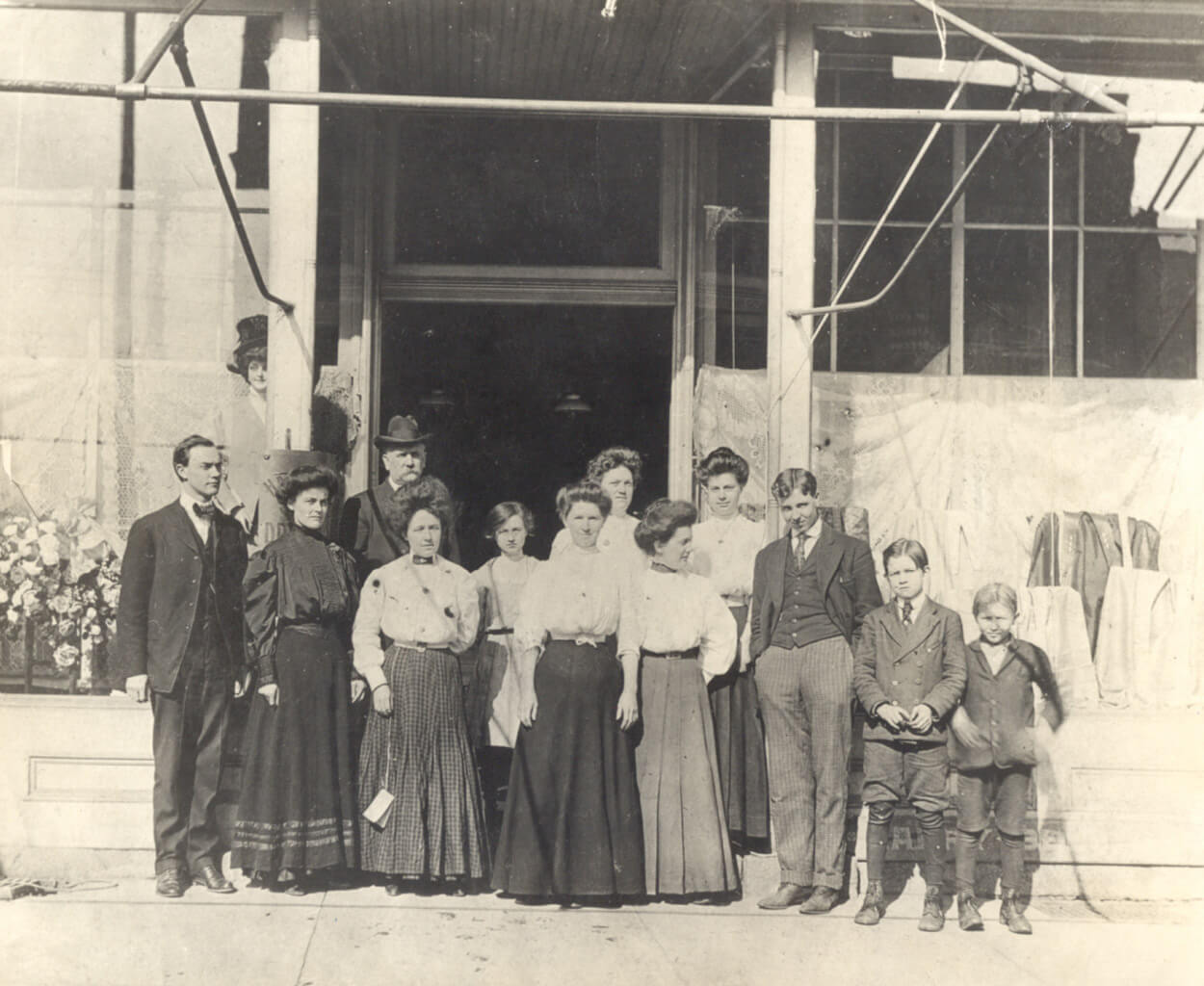 In 1904 or ’05, employees gather outside Harry-Belk Brothers Co. at the corner of West Washington and South Elm streets in Greensboro. photograph by BELK INC.

The world of retail, like everything else in the 21st century, changes by the day. In October, Belk made headlines when it unveiled a new logo, replacing the iconic cursive B that served as the store’s calling card since the 1960s, and introduced a new slogan, “Modern. Southern. Style.”

The slogan fits. Today, Belk is a cutting-edge merchandiser, reaching customers through the Internet and social media sites, such as Facebook and Twitter. And its bricks-and-mortar stores continue to draw droves of shoppers, which means that from time to time, someone, like my old boss Mr. Hensdale, will show up to survey operations.

Tim Belk still recalls family trips to Myrtle Beach when he was a boy that seemed to take forever. His father kept stopping in towns along the way to pop into one Belk store after another. The children moaned and groused at every delay.

When asked if he ever inflicted similar stops on his own family, Tim smiles sheepishly and raises his hand. “Guilty,” he says. “It’s a good chance to get out and see what’s going on.”