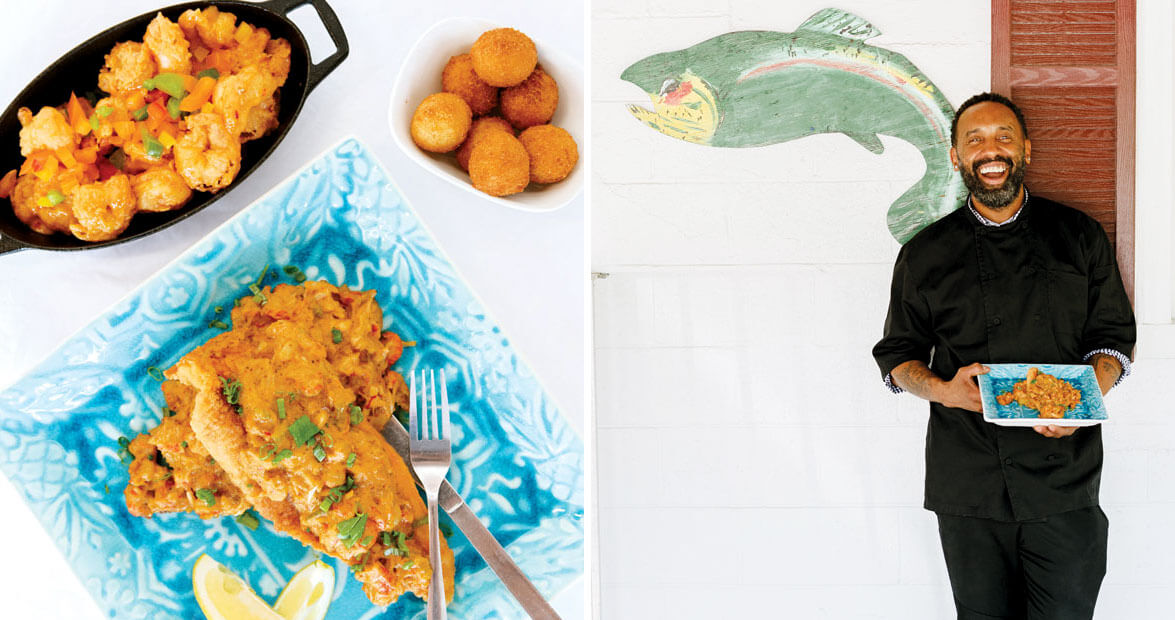 This guy. I mean, this guy. Danny Hayes: entrepreneur, chef, social media star, and owner of The House of Fish in Aberdeen. Whatever he’s doing, cooking, serving, or saying epitomizes the famous movie line, “I’ll have what [he’s] having.” You’ll want Hayes’s enthusiasm, his optimism, and, today, his special: whole trout stuffed with spinach, feta, lump crabmeat, and lobster from the live creatures that only minutes ago he was walking around his restaurant, displaying to customers.

Because this is how Hayes rolls: ultra-local, ultra-fresh, and animatedly talking 90 miles a minute. “Look what I got here!” he greets me without preamble, and holds out a cardboard box in which pale, pretty-as-a-picture, golden-orange squash blossoms nestle in rows. “John brought these in this morning. I’m gonna lightly fry them up in a batter with beer from Southern Pines Brewing Company and drizzle them with the house aioli,” he says excitedly. “I went out to John’s hundred acres in Whispering Pines, and it was love at first sight.”

John, as it happens, is John Frye of MacC’s Family Farm, and he’s sitting on a counter stool, waiting for lunch. “What are you having?” I ask. He shrugs. “Whatever Danny puts in front of me.”

Hayes, meanwhile, has whipped back to the kitchen, where customers can watch everything that’s happening. He calls to me: “Let’s start you with some Boom Boom Shrimp!”

Ten years ago, Hayes was working as an accountant for a design firm in New York City, planning a move to D.C., when his mother was diagnosed with stage 3 colon cancer. He came home to Hamlet to care for her. During a happenstance trip to small-town McColl, South Carolina, Hayes wandered into a Main Street joint where two women were frying fresh trout for customers at picnic tables. That was the light-bulb moment. As a boy, he’d helped a local seafood vendor sell fish out of a pickup on neighborhood rounds. As an adult, seafood was his favorite food; he’d always cooked, always entertained, always dreamed of his own restaurant. The following year, The House of Fish opened in a strip mall in Rockingham, and Hayes’s tattoo of a crab and the date 4/20/10 commemorates the event.

“I went to college to study accounting,” Hayes says, “but I got a Harvard small-business education in Richmond County.” Four years in, his landlord persuaded Hayes to look at a white cinder-block building that had once been a barbecue joint in Aberdeen. His best friend convinced him that it would be a smart move. The accolades — and the customers — have been flowing in ever since.

The decor is standard — anchors, fishing nets, sunset scenes — and the paper menu lists all the standards, too: shrimp, catfish, oysters, and “spots, croakers, bass, or whatever is swimming.” But if a newcomer is smart, he or she will just ask, “What you got today?” like everyone else.

Hayes loves to bring Facebook fans right into the kitchen with him through videos that he posts online. “I share as much as I can with the public,” he says. “It’s a live show. I switch it up every day. I want people to see how my range hood sparkles, that I don’t take any shortcuts.”

I’m studying an Instagram post of Hayes hefting a whole halibut half his size, but he’s rolling right along: “My crab cakes are domed. I don’t like them flat. I fold and fold and fold — I don’t want the lump crabmeat to break up. I have a Bergdorf Goodman kind of taste bud, so I like to broil, grill, or sauté. Anybody can fry.”

“It’s a classic seafood, soul food restaurant, but the soul is my soul.”

His recipes are all his own, including — “probably the favorite” — The Dougie, named for his best friend’s late brother. The Dougie is a crawfish and crabmeat gravy over a polenta cake, topped with a fried fish and more of that gravy goodness. At the moment, Hayes’s favorite fish to cook is Chilean sea bass. A Jamaican vacation inspired him to tinker with spices, and now, he’s doing whole red snapper in a jerk sauce made with Dr Pepper and orange juice: “The carbonated soda cuts through the heat.”

James, a military retiree from Fayetteville, challenged Hayes to cook new things, like frog legs, so he did. “Have you ever done ceviche?” James asked. So Hayes did that, too, in his own way. Same with his hush puppies, which carry the faintest hint of cinnamon. And the charred asparagus beside the trout — not exactly the side you’d expect in a casual seafood restaurant.

“Chain, chain, chain,” Aretha Franklin croons over the speakers as Hayes serves up his Boom Boom Shrimp special: A sweet-and-heat sauce coats shrimp that’s lightly fried for the barest crunch, yet still as soft as a biscuit’s insides when you bite into them. Hayes describes The House of Fish as “a classic seafood, soul food restaurant, but the soul is my soul. My whole soul is in the food.”

And those pound cakes — lemon, sour cream, chocolate — that line the counter? His mother, a cancer survivor at 80, makes them. “I’m an incredible baker,” Hayes says, “but I run from it.”

Besides, a delivery has just arrived. “Woo!” he shouts from the kitchen. He gleefully waves a couple of fresh North Carolina blue crabs in the air, looks them in the eye, says, “What’s up, baby?” and laughs.