Land of Oz, Ghost Town in the Sky, Tweetsie, Maggie Valley, Cherokee, Grandfather, the Smokies. For a kid in the ’70s growing up at the foot of the mountains, these High Country names conjured dreams: of witches, spooky trains, phantom cowboys, crags transfigured into the face of a giant. When my family and I journeyed west from Taylorsville to visit some of these tourist attractions, enchantment veiled the kitsch.

Now I’m 54, and nostalgia has supplanted wonder. But I’ve learned that longing for something that’s in the past isn’t simply loss; it’s also knowledge. Just like you don’t really understand a coat until you’re on a chilly peak without one, you don’t appreciate childhood’s charms until they’ve blown away. You can contemplate these bygone joys in some places more than others, and the Route 19 Inn in Maggie Valley is one such place.

To reach this newly owned and inventively renovated motor lodge — from 1948 until 2018, it was the Rocky Waters Motel — I head west to Maggie Valley on Route 19, with Lake Junaluska on my right. From here to Cherokee, some 25 miles away, is North Carolina’s version of Route 66. Since its beginning in 1927, Route 19 has eluded homogenization. Almost every establishment along the way is unique and old, from gift shops like the Rock Shop & Gem Mine, to museums such as Wheels Through Time, to attractions like The Stompin’ Ground dance hall. 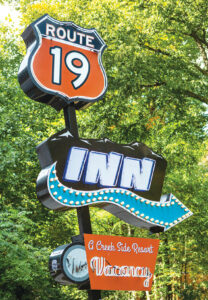 The Route 19 Inn has retro charm. photograph by Tim Robison

The brightness jolts me from the Smokies to 1950s Las Vegas, and a more cultured and encompassing nostalgia arrives — not for reverie’s fairylands but for groovier moods of history. Just past the sign, I turn right and cross a bridge over a brisk creek (the Jonathan, I find out later), and I remain in retro land. There is a low-to-the-ground, L-shaped building made of white concrete and divided into rooms with colorful doors and elegant rectangular windows. In front of the motel’s office, an old-fashioned fuel pump and a vintage car — a ’51 Kaiser — catch my eye. Nearby are the classic motor lodge amenities: a swimming pool and a playground, charcoal grills and picnic tables, shuffleboard, and firepits, around which, most evenings, guests sit and recount their adventures. 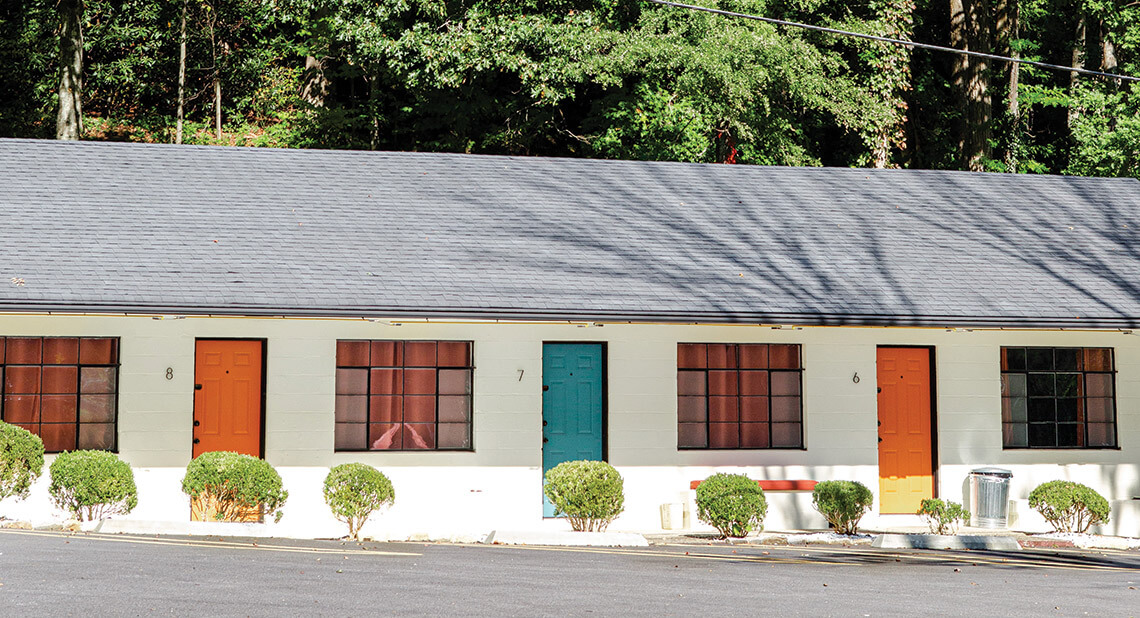 I check in, open my door, and I’m suddenly Elvis on his first tour — driving from gig to gig, instruments jammed in his trunk, falling, exhausted, into rooms like this: simple and spacious, with wood furniture and colorful ceramic tiles in the bathroom, plus a back patio by a creek — in this case, the Fie.

But it’s not really a celebrity whom I feel most connected to as I settle into my patio chair and relish the rush of the Fie. It’s my own dad, who died three years back. He grew up an hour away in Marion and would’ve been 14 in 1954, the year of Elvis’s first hit. And though his parents were too poor to afford to stay in a motel, he was restless for America’s motorways, which he traversed, like many of his time, with his thumb. In 1955, he hitchhiked to Asheville to see The King himself.

My dad was born too late to fight in the Second World War, but his passion for rambling corresponded to the spirit of his age, when American men just returned from overseas could not sit still. With disposable income from a booming economy and automobiles improved by wartime technologies, they loaded up their families and hit the road. Highways were built to accommodate families’ wanderlust, and motor lodges like this one arose for their rests.

As much as nostalgia, family is a theme of the Route 19 Inn. I discover this the next morning, when I speak to Eric and Angela Frisbee, the inn’s managers. I ask what the word “retro” means to them. After some thought, Eric — who is from Marion, like my dad — says that, to him, the word signifies less a style and more an experience. He remembers how, on Saturday mornings, his parents crowded the family into the car; headed to the grocery store to buy bread, lunch meats, chips, cookies, and pop; and then drove into nature, pulled off the road, and had a picnic. 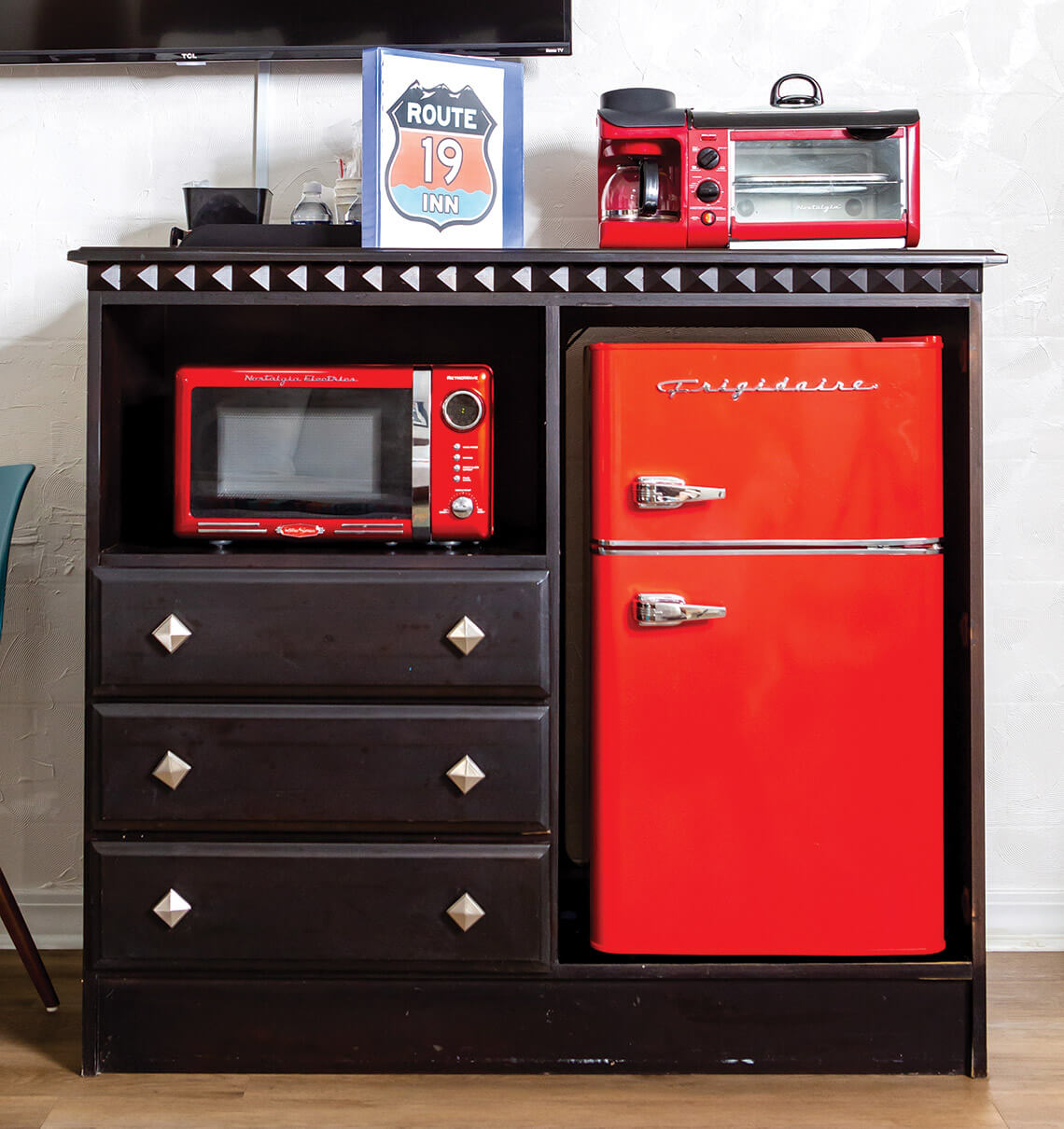 Rooms are decorated to make them feel like they’ve checked into a motor lodge from the 1950s — if only those accommodations from yesteryear included microwave ovens and in-room coffee makers. photograph by Tim Robison

In fact, the very concept of the Route 19 Inn is steeped in family. Matt Ferguson, one of the owners, was drawn to Maggie Valley because his father-in-law had lived there for more than 30 years. A former marketing executive for Disney, Matt saw in the town a real version of Radiator Springs, the fictional Route 66 town in the film Cars. He imagined the property like a Disney man might, as a symbol of the ideal road trip: the excitement of the new (freshly renovated rooms, contemporary art) married to the comfort of the old (vintage design, artifacts from the ’50s).

My visit to the inn reminds me of something else about my family’s trips to the mountains, something besides phantasms. There, my dad, normally serious and strict, cut the fool. In the altitude, maybe a tad light-headed, he did impersonations (Elvis, of course, and Bugs Bunny); performed magic tricks (it looked like he pulled his thumb right off!); and created silly walks (though he’d surely never seen Monty Python). He also told stories, ones he’d made up, like how Little Joe and Hoss from Bonanza invented the football by blowing up a pig’s bladder. 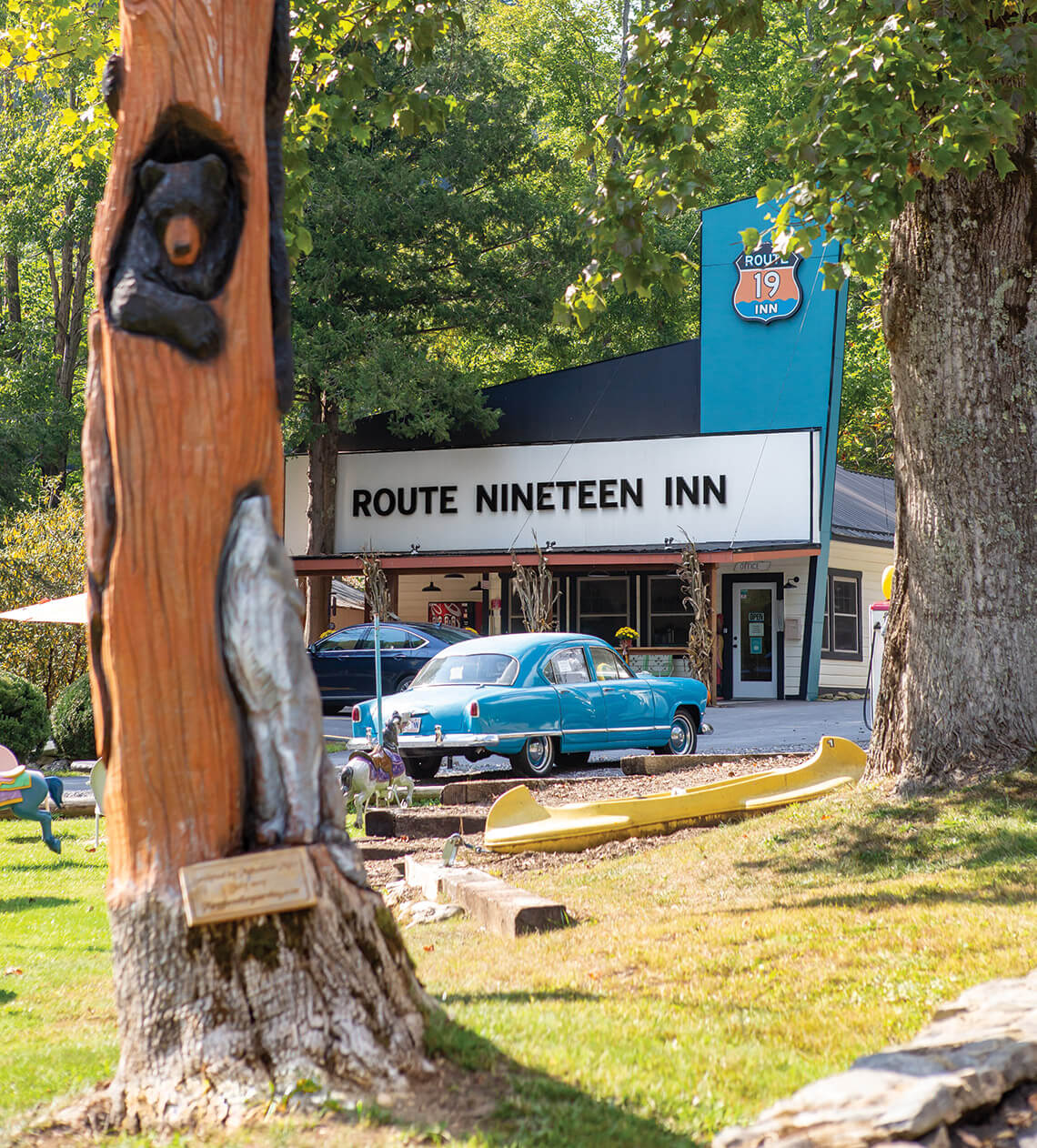 With its fanciful front lawn, decorated with carousel horses and a totem pole, plus a ’51 Kaiser parked in the lot, the Route 19 Inn is unmistakable, beckoning travelers from across the country. photograph by Tim Robison

His tales felt true to me. That’s one of the gifts of the road. Away from the rules of the house, the difference between truth and make-believe can blur. Here, though, is the most authentic nostalgia: recalling those moments that formed the you that you became.

Come spring, I’m going to drive my 7-year-old stepson to Maggie Valley. We’ll stay at the Route 19 Inn, we’ll play in the Fie, and I’ll do my imitation of Templeton the rat from Charlotte’s Web. He will ask me to do it again and again, and, with the Smokies high above, I will.