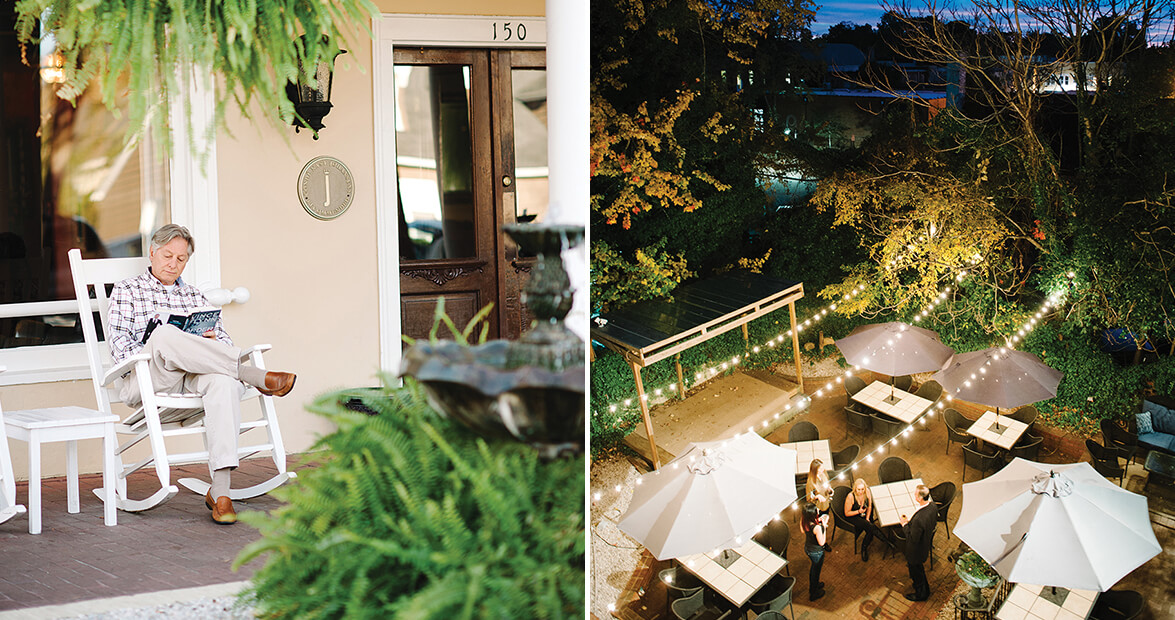 When Curtis Dean first visited The Jefferson Inn in Southern Pines in 2004, the century-old structure had been sitting abandoned for more than two years, and rain was falling through a hole in the roof.

“My initial reaction, which didn’t change for some time, was, ‘Get me out of here. I’m sorry, but I don’t have the expertise, the time, or the money,’ ” says Dean, a commercial real-estate broker from Raleigh. But he couldn’t shake the thought of the landmark, which would likely have been demolished and turned into a parking lot. Four months later, he wrote a check.

The Jefferson Inn sits half a block from the train station in Southern Pines’ historic downtown district, which is composed of low, red-brick boutiques and restaurants, and surrounded by quiet neighborhoods and farther out, horse farms, golf courses, and longleaf pines.

Since Dean finished a historic restoration in 2007 — which included closing up the “sunroof” — the 15-bedroom former residence has reclaimed its long-held role as a social hub. “It’s the heart and soul of the town,” Dean says. “It’s been the place to be for 100 years now.”

The inn’s structure dates back to the late 1800s, when a couple from New Hampshire built it as their winter home. In 1901, the pair enlarged their haven by setting a nearby dry goods store atop some logs, rolling it over, then attaching it. They began taking in guests, and later acquired an electric shop as well. From the beginning, The Jefferson drew people together. The owners hosted holiday parties, card games, and musical theater performances, and led their guests on picnic outings to nearby lakes.

The only hotel in downtown Southern Pines, The Jefferson feels warm and inviting. The cream-colored building hugs a long front porch lined with rocking chairs and hanging ferns. Inside, history emanates from the hardwood floors, stained-glass windows, and pressed-tin ceilings. The renovations introduced modern conveniences to the guest rooms, and Dean decked them out with small luxuries, including white down-filled duvets and rainfall showerheads.

One of the inn’s most beloved features is the large brick patio enclosed by ivy-covered walls out back, and its cold-weather counterpart — the dark, early-American-style tavern inside. In addition to attracting hotel guests, both spots have strong local followings. “This patio is No. 1 in town,” says Southern Pines resident David Young, sipping a glass of wine with a friend under late-afternoon blue skies. Young moved to the area in 1971 and has been a regular at The Jefferson Inn ever since. “This has been a central part of downtown for years,” he says.

A few hours later, beneath the glow of string lights, performer Tony Barnes takes the stage, as a musician does four nights a week year-round. Denim shirt sleeves rolled to his elbows, Barnes sings Johnny Cash, Steve Earle, and John Denver, as well as a few songs of his own.

From a cushioned seat near the edge of the patio, it’s not hard to imagine that over the past century, many nights like this, of music and mingling and talking and laughter, have unfolded here before.

Dean feels good about what he’s accomplished with The Jefferson Inn, saving it from demolition and restoring it to center stage in the community. And he’s glad that the establishment continues to draw people together. The whole thing, he says, “has turned into something a lot bigger than me.”