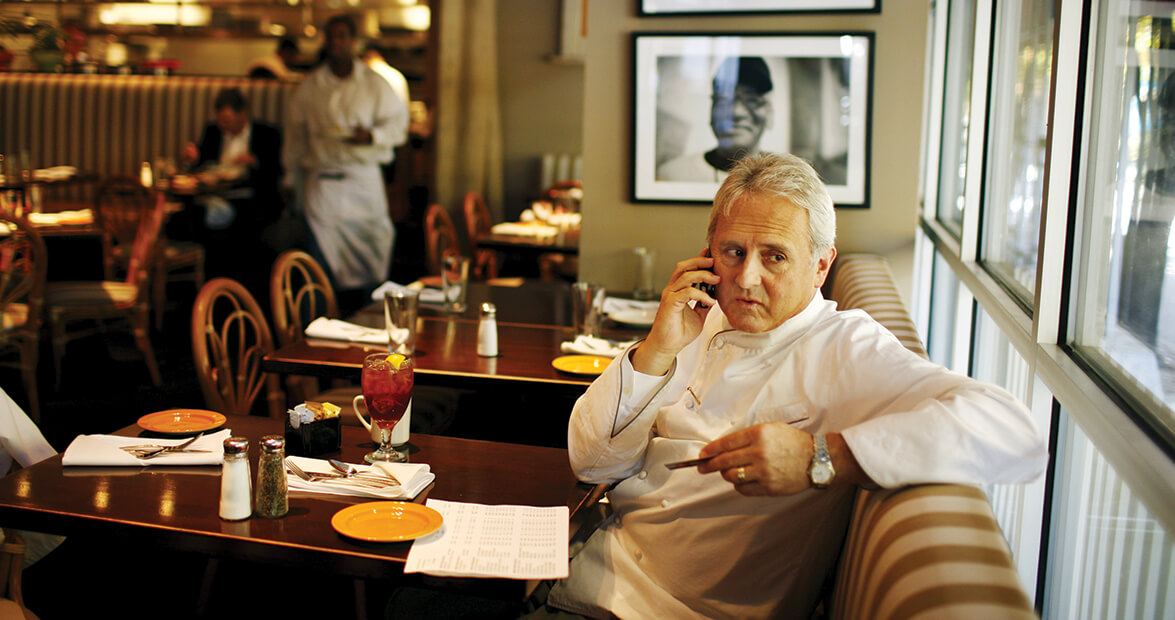 As you enter The King’s Kitchen, on a busy corner in uptown Charlotte, you might overlook one sign that this is no ordinary restaurant. High on a wall of the foyer is a Bible verse, Proverbs 19:17, written in neat, black script: “He who has pity on the poor lends to the Lord, and He will pay back what he has given.”

The bankers and office workers who crowd the restaurant at lunch and dinner are here for Aunt Beaut’s panfried chicken and classic Southern-style vegetables cooked with a modern, healthier twist — without the fatback. They come back for the cornbread plump with kernels, the banana pudding layered with homemade vanilla wafers, the shrimp and grits.

But for owner Jim Noble and his staff, The King’s Kitchen is more than a popular new place to eat. It is a mission. Noble plans to give all the profits to ministries that feed the poor. His staff will train recovering addicts, former convicts, and high-risk youth to work in a restaurant, so they can go out and find jobs. Photocopies tucked inside a lime green colander on a shelf up front explain it best: “To Feed the Hungry & To Heal the Brokenhearted.”

The inspiration for The King’s Kitchen — or marching orders, as Noble puts it — comes from the Bible. “Jesus commanded us to take care of widows, orphans, and the poor,” Noble says. “We have to do it. It’s like when you’re in the Army. If you wake up and don’t make your bed, you get into trouble. We have to feed the poor.”

A restaurant and a ministry

Noble is one of North Carolina’s most notable chefs, known for a sophisticated lineup of restaurants, including Noble’s Grille and Rooster’s Wood-Fired Kitchen, in Charlotte, Winston-Salem, and High Point. He’s a savvy businessman and understands that for his innovative new restaurant to succeed, the first priority must be the food. He slips into the kitchen most afternoons and oversees production. Cooks and servers jostle for position and plates. In their midst stands Noble, in jeans and a white chef’s jacket. He speaks softly, but his voice carries authority, as he corrects and encourages.

“This is a restaurant and a ministry, jointly and separately,” he says. “If the food is not good, or the service is not good, people won’t come back. My main task is to make sure it is run smoothly.”

Food has long been Noble’s passion. His father was a furniture salesman who loved to cook and told his young son he dreamed of one day owning a restaurant that served panfried chicken. Noble had no idea then that he would be the one to realize the dream. He graduated from North Carolina State University’s furniture manufacturing and management program in 1977 and followed his father into the business. But the furniture business didn’t suit Noble. He found work instead in a nightclub in Raleigh, then opened a bar in Clemson. At 28, he opened Restaurant J. Basul Noble in High Point.

He considered himself a Christian and attended church with his wife, Karen. But they didn’t find the commitment that now drives their lives until after their daughter Olivia was born in 1993. When she was two weeks old, Olivia was diagnosed with viral encephalitis, an inflammation of the brain.

“We almost lost her,” Noble says. “We realized no one could help us, so we turned to God. We began to see answers to our questions, and we were amazed at what we found. So we started teaching people.”

They formed Restoration Word Ministries in 1998, Noble became an ordained minister, and until recently, they aired a weekly Christian radio show. Meanwhile, he continued to make his name as a restaurateur. As their business and their ministry grew, so did Olivia. She is now 17. And although she has never walked or talked, Noble says: “She’s doing good.”

For years, Jim and Karen Noble have fed the poor. They have made meals for the homeless at Thanksgiving and Christmas. They cooked for hundreds of refugees who fled to Charlotte after Hurricane Katrina in 2005. Once a week, they provide meals to two ministries. But they wanted to do something every day. It was Karen who came up with the idea of The King’s Kitchen.

With the help of donations, they opened the restaurant at 129 West Trade Street on April 22, 2010. By late summer, it was turning a profit. Noble hoped to begin early this year the second part of the mission — training people who are considered unemployable. “Our goal,” he says, “is to help get them back on their feet. We will have daily Bible study and teach them social skills. Our goal is to help them get a job. This is not full-time employment.”

After a trainee finishes the 40-week program, another trainee will take his place.

Noble hired Jesse Spann, who cooked for him at Noble’s and Rooster’s in Charlotte, to be head chef. Not only does Spann share Noble’s passion for food, he also shares his passion for helping the poor. Spann describes himself as a former evangelist who 20 years ago was unemployed and on drugs. He became homeless in Durham. That experience, he says, helps him see potential in people who much of society disregards. When a dishwasher at The King’s Kitchen struggled with addiction, instead of replacing him and moving on, Spann went to the man’s home and got him into a rehab program.

It’s an extra demand in an already demanding profession.

“There will be some challenges, for sure,” Noble says, “but we feel like it’s a calling.”

If you ate at The King’s Kitchen and didn’t know about the mission, you might not realize that it’s anything other than an upscale meat-and-three restaurant. The dining room is airy, furnished with wood tables and handsome beige- and-cream-striped upholstery. The menu reflects Noble’s belief in using natural, locally grown, and organic products.

The signature dish, panfried chicken, is cooked the way his aunt Beaut cooked it on Sundays when he was a boy: Pieces are soaked overnight in brine to draw out the blood, then dipped in buttermilk and dredged in seasoned flour. The chefs fry the chicken in cast-iron skillets, five minutes a side at high heat, then 30 minutes covered over low heat to plump up the meat, then another five minutes on high to crisp up the outside.

The food is good. That’s what you would expect from a Jim Noble restaurant. Only if you look closely will you discover reminders of its greater purpose.

On a burlap curtain enclosing a private dining area is a handwritten message about a woman who overcame addiction and became a homeowner at age 50.

On a chalkboard up front is an inspirational quote from Mother Teresa.

On the walls are framed black-and-white photographs donated by architect Rebecca Necessary of Raleigh. They are portraits she made of the homeless, white faces, brown and black faces, some wrinkled, others with smooth cheeks, some smiling, some not, all hungry at some point in their lives.

They are the faces of the poor, and although you will not see them seated at a table, they are the people The King’s Kitchen is designed to feed.