Jim Douthit had been given the unglamorous task of cleaning out the top floor of Chatham Manufacturing Company’s warehouse in Elkin. It was 1998, and he was working as director of quality and technical services at the textile company. Over the years, the space above the warehouse had collected boxes of documents and mementos from the company’s long history — photographs, duck decoys from hunting trips, records dating back to the early 1900s. 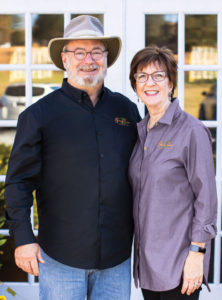 For a time when Jim and Cynthia Douthit were dating, Jim lived at the Chatham farm. photograph by Revival Creatives

As he went through the boxes, one thing in particular caught his eye: a 3-by-2-foot aerial photograph of the former Klondike Dairy Farm, which Chatham had used as a company retreat since 1929. Water damage had stained the edges of the photo, but the buildings were all there in black and white — the 1920s cabins, the dairy barn, the creamery, the horse stables. Jim had gone to dozens of company functions on this property, and even lived there for a time back when he first started working at Chatham. He had so many memories tied to the place. “So I kept that,” he says. “I didn’t know I was going to end up owning part of that farm later on.”

Five years later, Grassy Creek Vineyard & Winery became the latest installment in the story of this land. Jim; his wife, Cynthia; and their partners Derrill and Lori Rice started the winery in 2003 after Derrill purchased the property. Many of the buildings from that black-and-white photo remain: the red horse stable that’s now the tasting room, the historic cabins that serve as vacation rentals, and the white dairy barn that houses the winery. The Douthits and the Rices wanted to preserve as much history as possible, from the property’s days as a playground for the wealthy to its time as a dairy farm and, later, a Chatham Manufacturing Company retreat.

“We didn’t want to create something new,” Cynthia says. “We wanted to keep the land as a farm and reuse the buildings and let people just come and visit and stay, and not feel rushed. We wanted to create an atmosphere of rest and relaxation.”

The farm started with not just one, but two textile magnates — Thurmond Chatham, of Chatham Manufacturing, and John Hanes, founder of Hanes Hosiery Mill. In the early 1920s, Hanes purchased a one-room cabin on more than a thousand acres surrounding Grassy Creek. Chatham soon married Hanes’s sister Lucy, and together, the two families utilized the farm as a hunting retreat where they raised bird dogs.

At the suggestion of their good friend, politician and dairyman J.C. Penney, the Chathams and the Haneses bought Golden Guernsey cattle to start Klondike Dairy Farm. With its prize herd, Klondike delivered whole milk, buttermilk, and the self-proclaimed “best chocolate milk in the world” to homes across the region.

One particular Klondike cow earned the dairy widespread recognition. As Jim tells it, in 1934, Klondike Nira was selected as one of three cows to accompany Admiral Richard Byrd on his Antarctic expedition. The cows would provide milk and butter to the team over the three years that they would be living on the ice. That wasn’t all — Byrd also wanted to claim the first calf born on the ice, and Klondike Nira was pregnant. But, Jim says, “she had her calf on board the ship before they got there, so he didn’t get that record.” 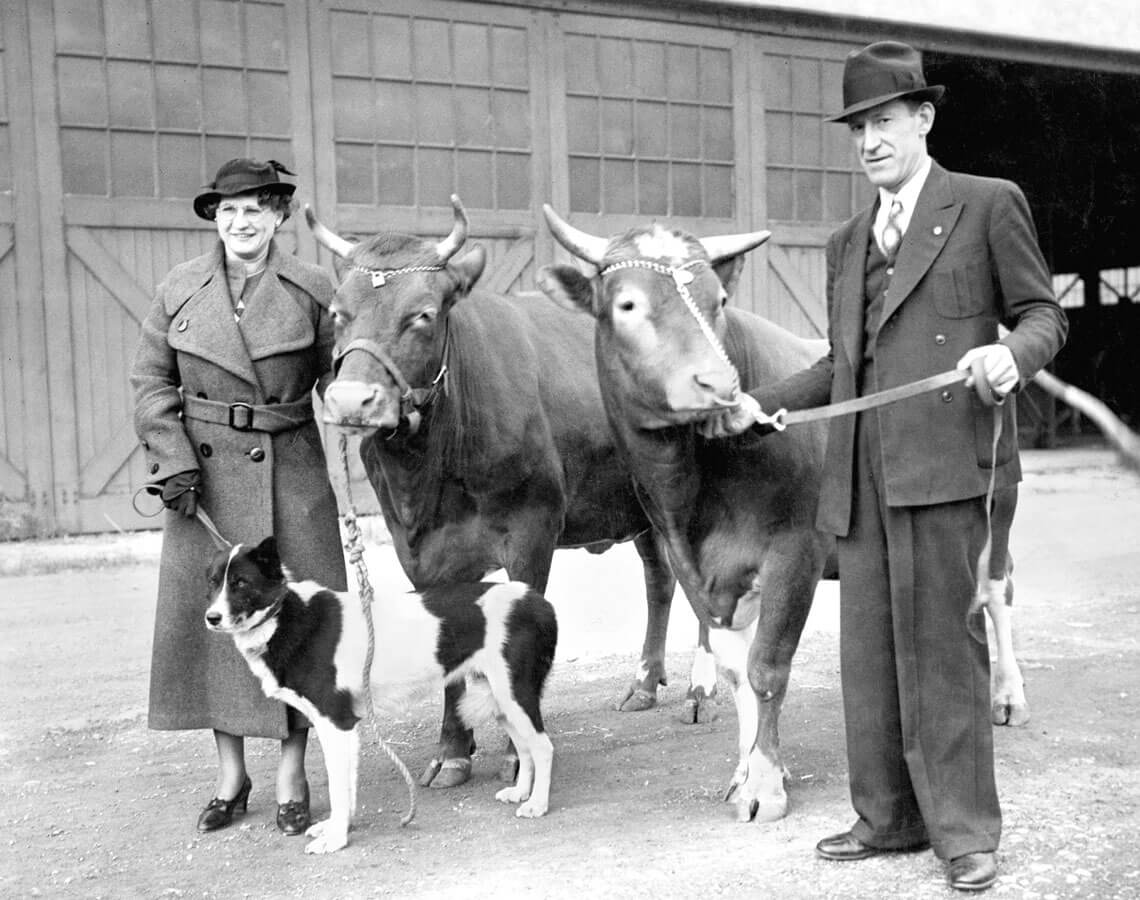 Klondike Nira didn’t make it back to the farm, but her calf, Iceberg, did. When the Douthits and Rices were researching the farm, they found a photo of Thurmond Chatham and J.C. Penney standing with Iceberg in front of a Waldorf hotel in New York City. “Both of them were running for political office, and they were using the exploration of Admiral Byrd and Iceberg in their political campaign,” Jim says.

There are plenty of interesting stories like that surrounding Grassy Creek Vineyard & Winery. The property was eventually purchased by the Chatham family, and it became the official guest house for Chatham Manufacturing Company, a major producer of wool products in the United States, including clothing and blankets for the military during World War II. By the 1970s, the company was producing various types of yarns and weaving textiles for the furniture and automobile industries as well, and its presence was felt throughout the area. Chatham is responsible for many of the buildings, churches, bridges, and utilities in Elkin.

The company turned the farm into a retreat to woo potential clients, temporarily house employees moving to the area, and celebrate holidays and major employee successes. A full-time property manager lived on-site, and Chatham employed a chef to prepare meals for events and celebrations. The cabin complex provided a facility for entertainment and also allowed Chatham executives a place to host customers and suppliers. Many deals were struck during after-dinner cocktails and cigars on the back porch of the main cabin.

Many deals were struck during after-dinner cocktails and cigars on the back porch of the main cabin.

Jim first took a job at Chatham in 1995 after working at another textile company in Valdese, where he met Cynthia, who worked in textile design. While he was house-hunting near Elkin, Jim lived in one of the houses on the Chatham farm for about six months. He could hunt, fish at the pond, shoot skeet at the range, or play horseshoes. “Life was great,” he says with a chuckle.

While they were dating, Cynthia would visit Jim at the farm. They’d walk her dog around the rolling hills and through the woods by the stream, not knowing then what the future would hold. “We got married, moved to Statesville, and then planted a vineyard in Troutman in 2002,” Cynthia says. “Then we ended up being here, owning the farm where we fell in love.” 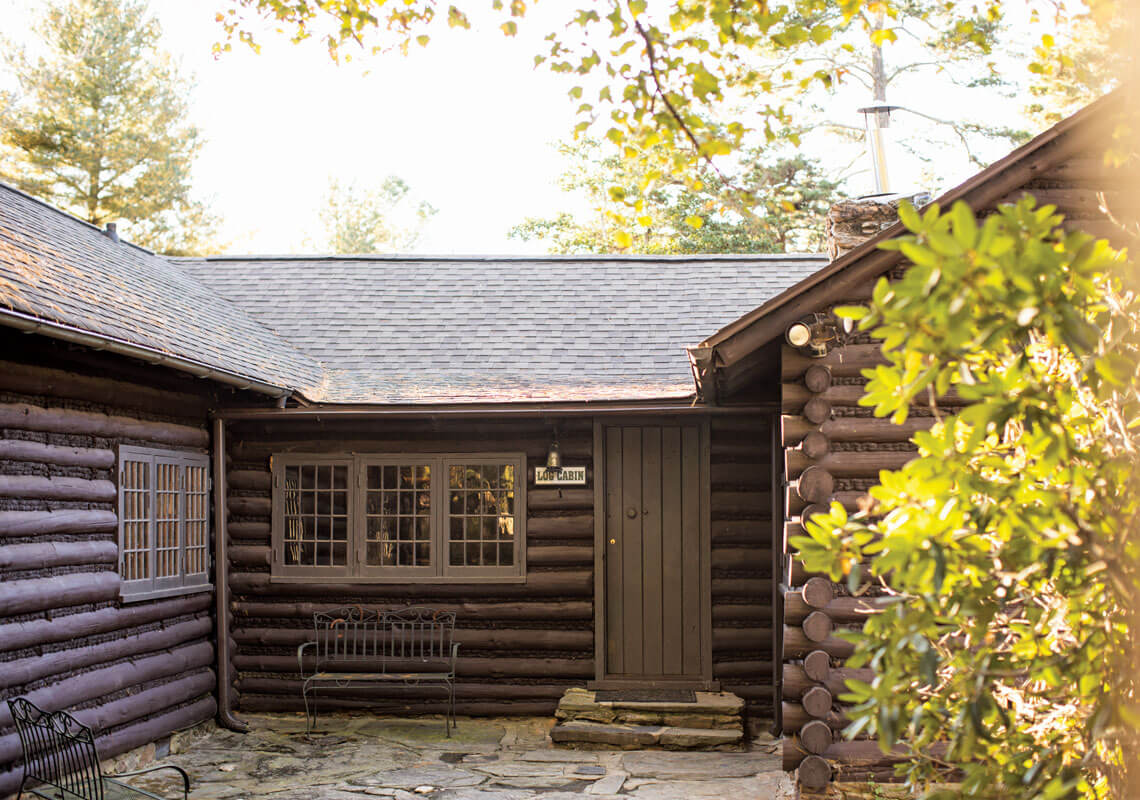 True to the property’s roots as a rural getaway, the four Klondike Cabins welcome guests to rest, relax, and immerse themselves in history. photographs by Revival Creatives 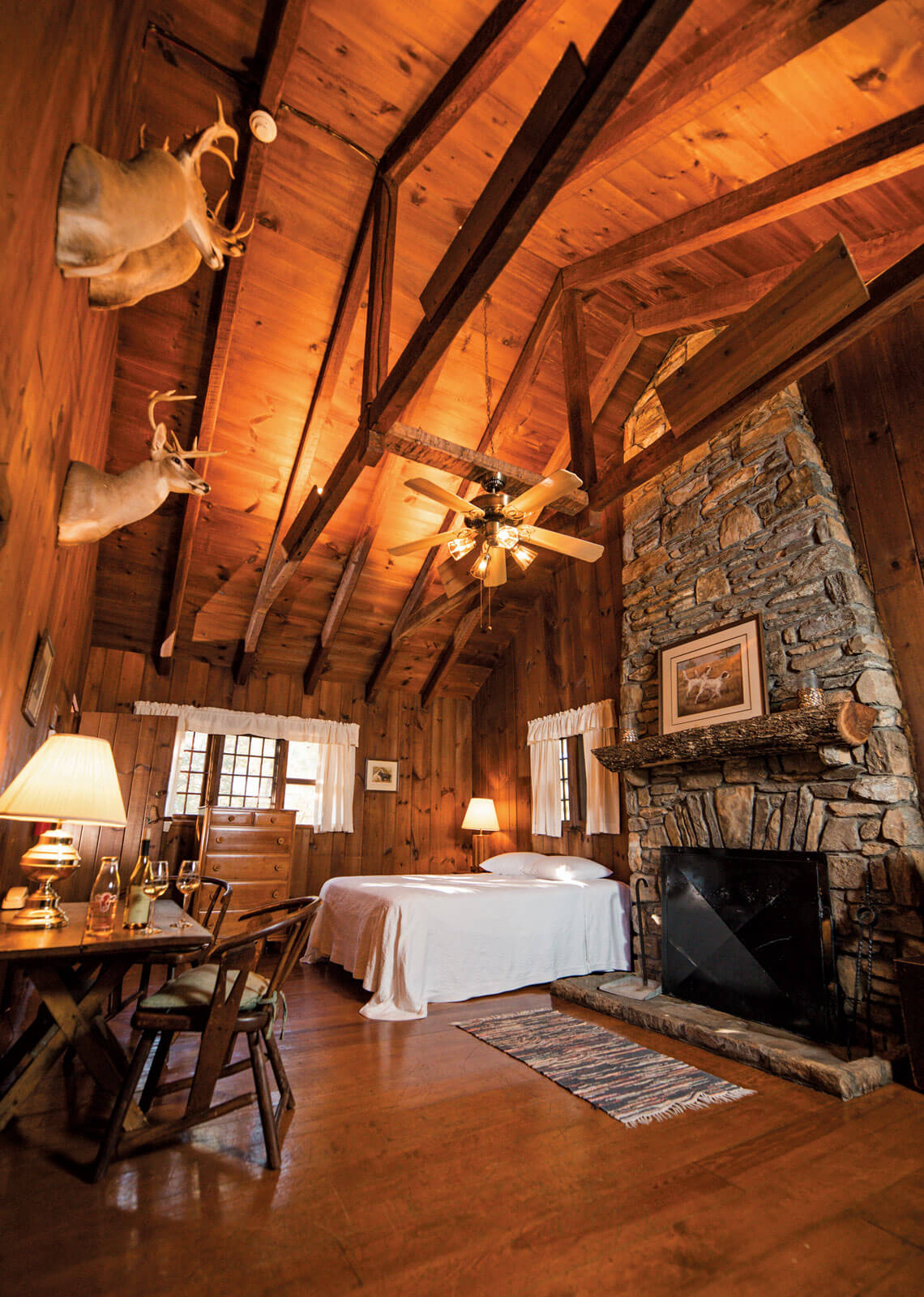 As in much of the rest of the state, the good times didn’t last for the textile company. Chatham was sold in 2002, and Jim and several other executives were replaced. So Jim turned to his lifelong passion: winemaking. As a kid, his dad was in the Navy, and his family was stationed in various places around the world. His dad loved to grow things and make wine, so everywhere they went, they planted grapes and peaches and cherries. “I called him Johnny Appleseed because he was planting all these things, and then we’d be relocated,” Jim says. “I liked doing the garden with my dad. I just liked doing that stuff with my hands.”

They made wine out of any fruit and flowers they could, wherever they could — in the bathtub, in the basement, or wherever Jim’s mom would let them. Later, while working in textiles, Jim worked with Portuguese winemakers in Massachusetts and studied oenology at Surry Community College. After leaving the textile business, he planted 10 acres of grapes in Troutman to sell to wineries.

But he didn’t have thoughts of starting a winery until 2002, when Derrill Rice, who had stayed on as president after Chatham was sold, suggested that the Douthits go into business with him on the Chatham farm, which he had purchased. “Derrill knew I’d been making wine all my life, and he’d had some of it, so he said, ‘Let’s make it a winery to save the farm,’” Jim says.

Eventually, they planted 20 acres of grapes. Both families are partners in the vineyard, while Derrill and Lori own and manage the cabins. Cynthia works on marketing and Jim makes the wine, along with assistant winemaker Lynn Nycum. The two other couples — Lynn and Larry Nycum and Peggi and Steve Clark — came in as partners later.

Jim’s partner knew that winemaking was his lifelong passion. “Let’s make it a winery to save the farm,” he told him.

Derrill and Jim tried to repurpose as many of the buildings as they could. The winery is housed in the former dairy barn. The feeding and watering troughs were removed to increase floor space, but four were saved as an example of how the barn used to be. Inside the four cabins that the Hanes family built, original hearths and wood beams, Chatham blankets, and hunting paraphernalia tell the story of the textile company and local history.

At the former horse stable, tasting room manager Wayne Moore recounts the tale of Klondike Nira while serving up semisweet wines under the brand Klondike Farm in glass bottles similar to the old home-delivered milk bottles from long ago. The winery is known for making dry red and white wines, but “it’s fair to say the South likes sugar,” Jim says, so they started the Klondike Farm brand to meet that demand.

Even before the winery officially opened in 2006, people would drive through to see the property that had been a part of Chatham Manufacturing Company’s history for so long. Before, it had always been private land, and not just anyone could come driving up the gravel road. “Everybody has memories of it,” Cynthia says. “We’d get a lot of people just because their great-grandfather used to work there, or their mother and father, and they had always heard about this.”

One day about 10 years ago, a woman in her 80s came to the tasting room and was examining the black-and-white aerial photo of the farm that was found so many years ago, now in a frame on the wall. Her father had been the head creamer at Klondike Dairy, she told Cynthia, and he was the one who came up with that world-famous chocolate milk recipe. She remembered coming home from school and going over to the creamery to get samples. 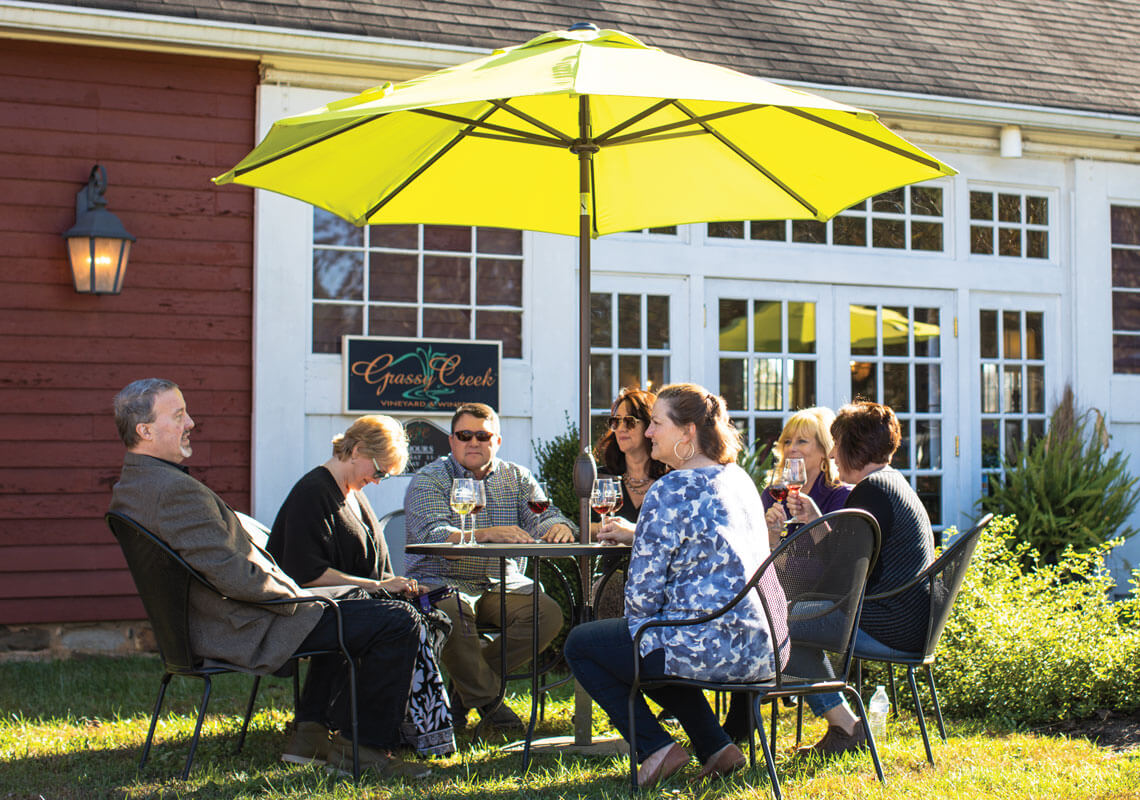 At the tasting room, guests can enjoy live music, outdoor activities like croquet, and wine made with grape varietals like Barbera. photograph by Revival Creatives

It’s memories like these that make this land such a special place, and they’re part of the reason why the Douthits and the Rices want to keep it open to the public. Several years ago, they were approached by the Elkin Trails Organization about running the Mountains-to-Sea Trail through the property. Visitors come to hike to nearby Carter Falls or stroll through the woods, regardless of whether they visit the tasting room.