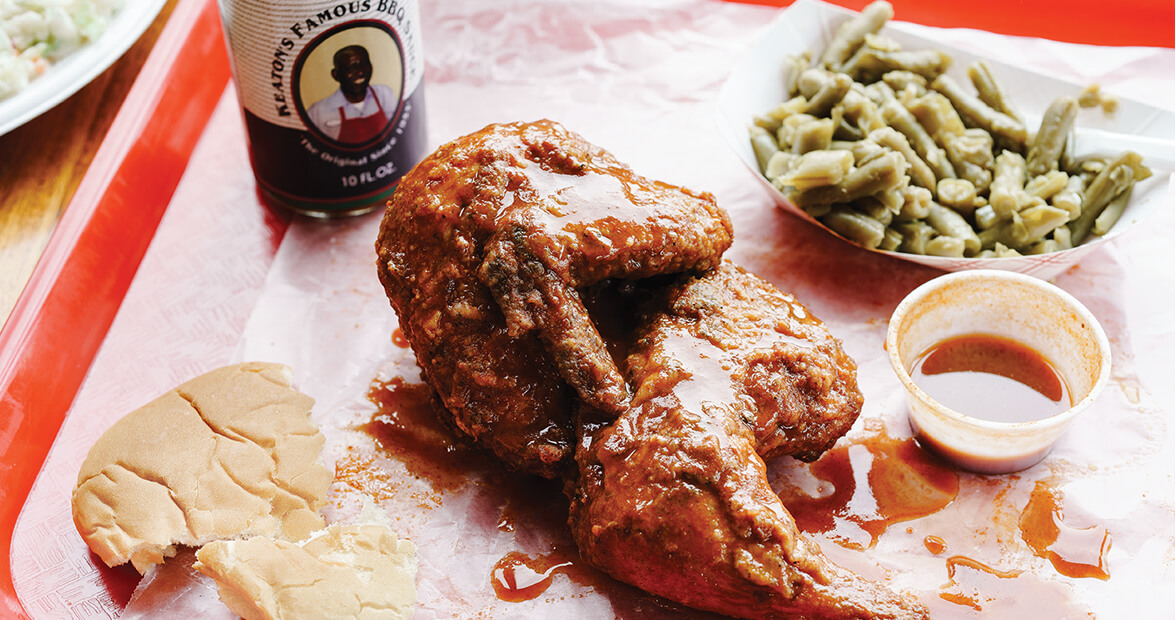 “If you want to be entertained, go to a club. We’re here to feed you.”
— Robert Keaton, brother of B.W. Keaton

By all accounts, B.W. Keaton was a man uninterested in compromise. If you wanted to try his glorious fried chicken, dipped in his secret-recipe barbecue sauce, you had to earn it. You had to find his cinder-block restaurant in the middle of nowhere. You had to hope it was open — B.W. Keaton wasn’t much for keeping consistent hours of operation. You had to wait, sometimes for hours, and hope they didn’t run out before you got to the front. If you were lucky enough to get some of that chicken, there were only a few booths and a counter to eat at; Keaton’s didn’t have a full dining room until B.W. died in 1989 and his niece Kathleen Murray added one after she took over the business. 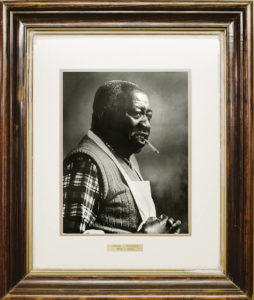 And if things ever got a bit too rowdy, well, everyone knew that B.W. Keaton kept a shotgun underneath the checkout counter.

That, friends, is what real fried chicken is all about. We have moved into a time where so-called fried chicken is everywhere — on sandwiches and in buckets, cut up into tenders and nuggets, pushed on us ceaselessly by semiliterate cows who try to distract a burger-loving nation. The thing we call fried chicken now has become ordinary, a Happy Meal, a six-pack, something to snack on until a more exotic option comes along.

But fried chicken — real fried chicken — is the food of the gods. It’s the best food ever invented for connecting people, for gatherings with family, for reunions and picnics and Fourth of July get-togethers and after-church socials. It is the only food, other than perhaps pie, that is equally wonderful hot and cold. And it is, unquestionably, the best food for conversation. People open up over fried chicken like they do for no other food.

Yes, I suppose that as a writer for a reputable magazine I should have some support for this conversation theory, some scientific or statistical evidence that proves or at least suggests that fried chicken is better for conversation than, say, spaghetti and meatballs or barbecued ribs or chili or anything else. I do not have such evidence.

But if you want, we can meet at Keaton’s and talk about it.

If you want the wonder of Keaton’s Barbecue chicken, you have to work for it.

There are two basic challenges when it comes to partaking in the religious experience of eating the fried chicken at Keaton’s Barbecue. First, there’s getting there. Keaton’s is technically in Cleveland, North Carolina, which is technically in the middle of nowhere. B.W. Keaton grew up in a farmhouse down the road, and he started selling chicken in a shack nearby after he got laid off from the railroad in 1953. He had various offers through the years to build a full-service restaurant in Statesville or even Charlotte; he would sooner have sold his barbecue sauce recipe to the devil.

Actually, it wasn’t the devil but the Schlitz Brewing Company that at one point tried to buy Keaton’s barbecue recipe. The offer, as legend goes, was $10,000. Keaton told Schlitz to get back to him when they got to $100,000.

So, Keaton’s has not moved and won’t move — if you want to taste Keaton’s hot dipped fried chicken, you have to hit the road. To get there, you drive to Statesville, then you take one of the exits, and then you drive until you’re lost. And then you’re there. If you stop along the way to ask for directions, the person will tell you: “Yeah, just keep going, you’re just not lost enough.”

When and if you get to Keaton’s, you will know it by the “Keaton’s Original Barbecue” sign out front. It has one of my all-time favorite slogans: Best by taste test … “Real Goood.”

I’m not sure what taste test was ever actually given at Keaton’s — I suspect B.W. Keaton would have pulled out the shotgun if anyone ever suggested one — nor do I know to whom to attribute that quote, “Real Goood.” I imagine it is a direct quote from every single person who ever went there. 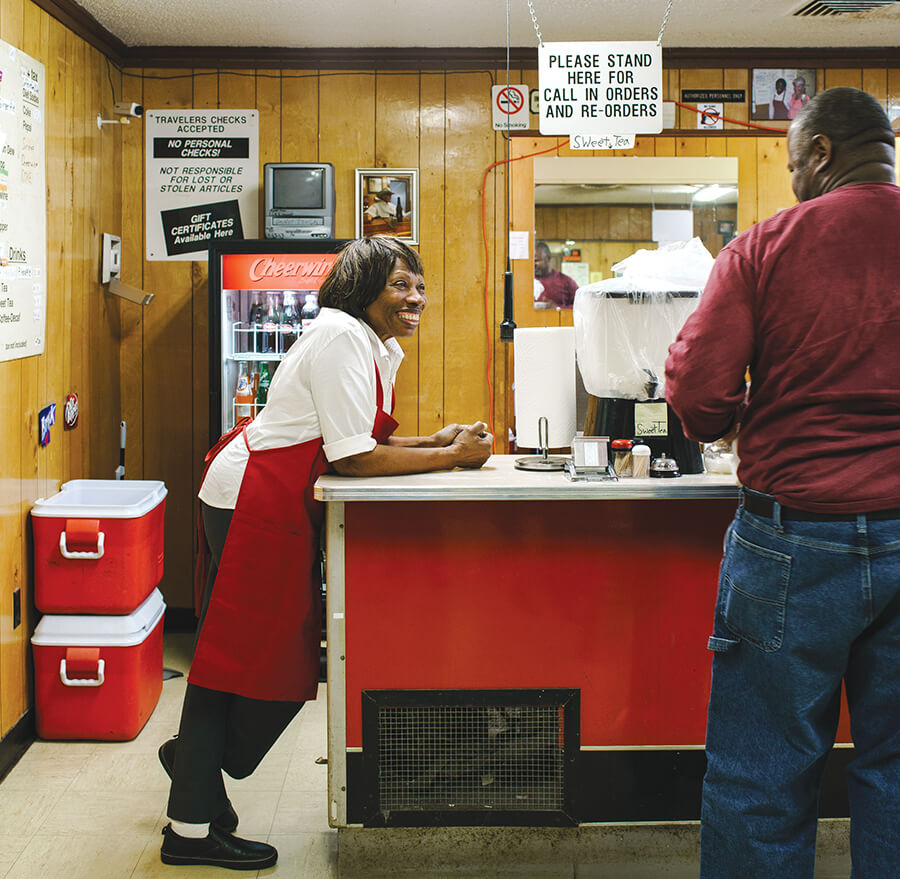 B.W.’s secrets are in good hands: His niece Kathleen Murray has run Keaton’s since 1991. photograph by Johnny Autry

The second Keaton’s challenge is getting to the restaurant when it’s open. B.W. Keaton opened the place more or less when he felt like it. This tradition has endured. The hours of operation at Keaton’s make for a poem that someone might want to crochet:

The take-out menus at Keaton’s and the sign out front actually have its hours listed as 5 to 8 from Wednesday to Saturday, and when I ask the woman behind the counter about the discrepancy, she explains by saying, “Yeah.” The spirit of B.W. Keaton insists that if you want the wonder of Keaton’s Barbecue chicken, you have to work for it.

If you go to the Keaton’s website — oh, what would B.W. Keaton have thought about a website? — you’ll come upon a real treasure: a video piece on Keaton’s recorded by Carolina Camera. It features an interview with B.W. Keaton himself. Well, it’s not exactly an interview — he doesn’t actually stop cooking to talk — but he says a few words:

“An old man about 92 years old and myself got together, kind of like a football huddle,” he says. “And that’s what we came out with. It’ll penetrate the chicken. Then penetrate the bone.”

He wasn’t lying. This chicken is fried and then dipped right into that magical barbecue sauce. You should know that when and if you get inside Keaton’s, you will have several options: In addition to the choice between white meat and dark meat, you can order a half chicken or a whole chicken. And … no, that’s pretty much it. You do have the option of ordering the chicken hot or mild, though you should be warned: When I ask the woman behind the counter about the mild, she offers a look of such deep disapproval that I feel like I have publicly shamed my entire family.

That sauce is pretty hot on first taste, but then, magical as it is, your body acclimates to its wonder. That sauce does penetrate the chicken, the bone, your lungs, and your heart in more ways than one. It’s impossibly delicious. They tell you that it also prevents the chicken from being greasy. It probably cures a host of ailments and various diseases, too.

There are side dishes at Keaton’s, which are fine and are extra and are beside the point. When you order the chicken, you get the chicken … and a white bread bun. You also get a plastic fork and knife, which might not sound like much, but it’s a new thing. B.W. Keaton didn’t believe in giving out any utensils. You have your fingers, don’t you?

There are all sorts of signs with rules inside Keaton’s. No weapons are allowed. No swearing is allowed. You can use a credit card if your order is more than $5, but if you are using cash, you must pay with exact change in small bills. And, you are not allowed to take photographs of the employees. It’s not entirely clear what necessitated that rule.

On the day I make it to Keaton’s, two friends join me, and of course we have the greatest conversation about a million things because that’s what real fried chicken does. We talk about music and love and food and wonder. Yes, B.W. Keaton’s brother had it right. You bring your own entertainment to Keaton’s. They provide the chicken.