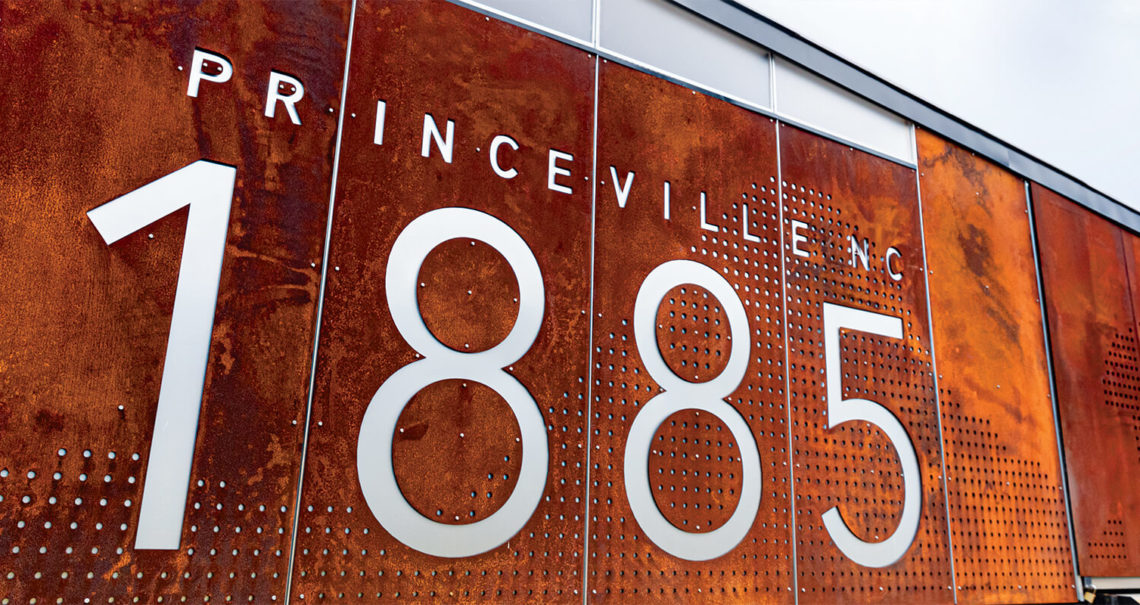 If you traveled this road before 2019 and didn’t know what you were looking for, you would miss a major piece of North Carolina’s Black history. Tucked into the south bank of a bend in the Tar River at the intersection of U.S. highways 258 and 64 in Edgecombe County sits a little silver historical marker with the words “Freedom Hill” written at the top. A little bit farther down 64, which also doubles as the small town’s Main Street, a bigger green sign reads, “Welcome to Princeville: Oldest Town Chartered by Blacks in America. Home of Historic Freedom Hill.”

A new project, created with students at the North Carolina State University School of Architecture’s Design + Build studio, aims to change the way people passing through see this town. Along the highway is an arresting structure — a 200-square-foot mobile unit covered in patinaed corten steel. Emblazoned across its side is the date 1885. This is Princeville’s new museum. When visitors step inside, the story of this town comes alive.

After the Civil War and Emancipation, hundreds of formerly enslaved people made their way to this patch of swamp next to Tarboro. The land was considered to be of little value, but the Union Army was stationed there, and these people were seeking protection and trying to figure out a new way of life. With little more than the clothes on their backs, they decided to make this place their new home, helping one another build shelters and tend the land to be able to feed their growing community. 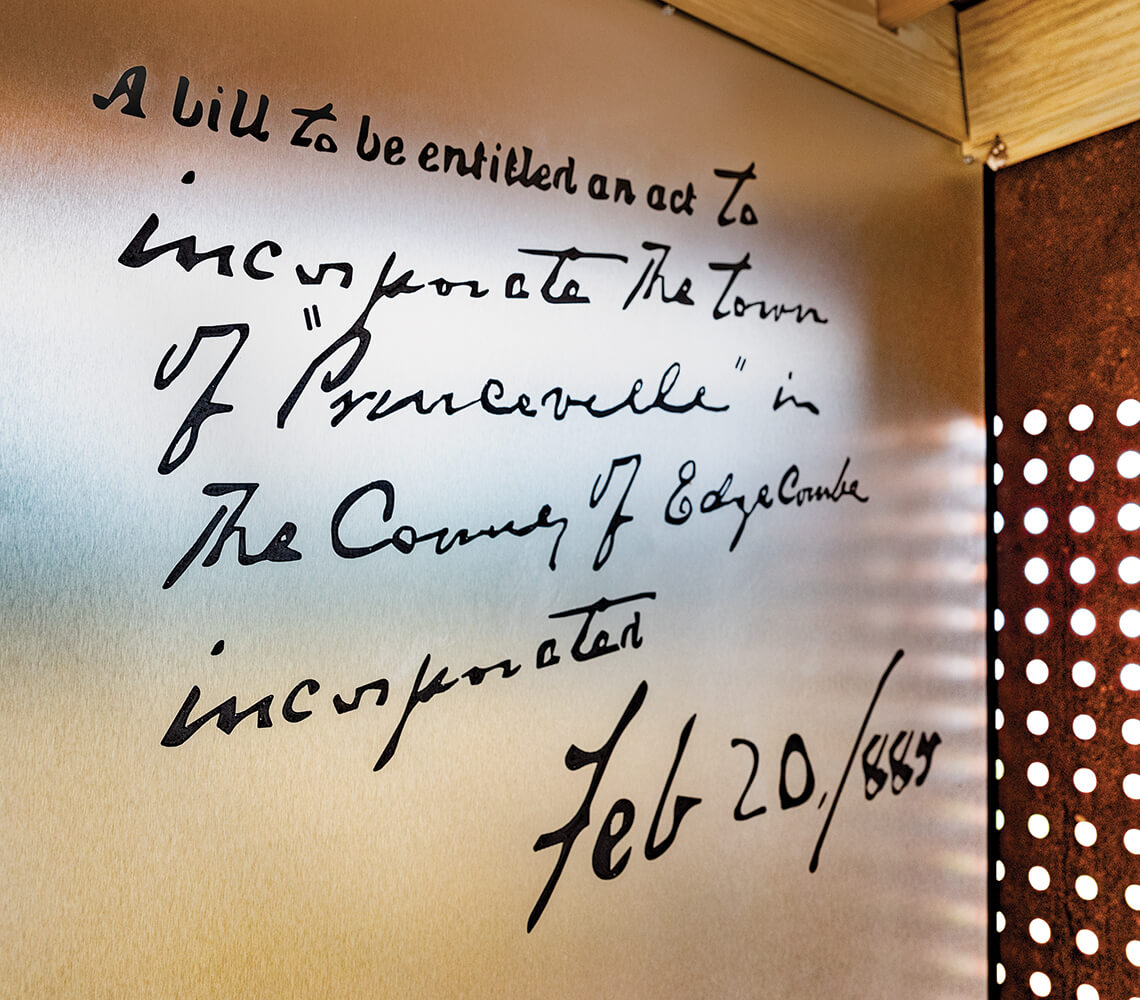 The author’s tour of the museum (below) included photos of Princeville residents and an excerpt (above) from the town’s charter. photograph by Charles Harris 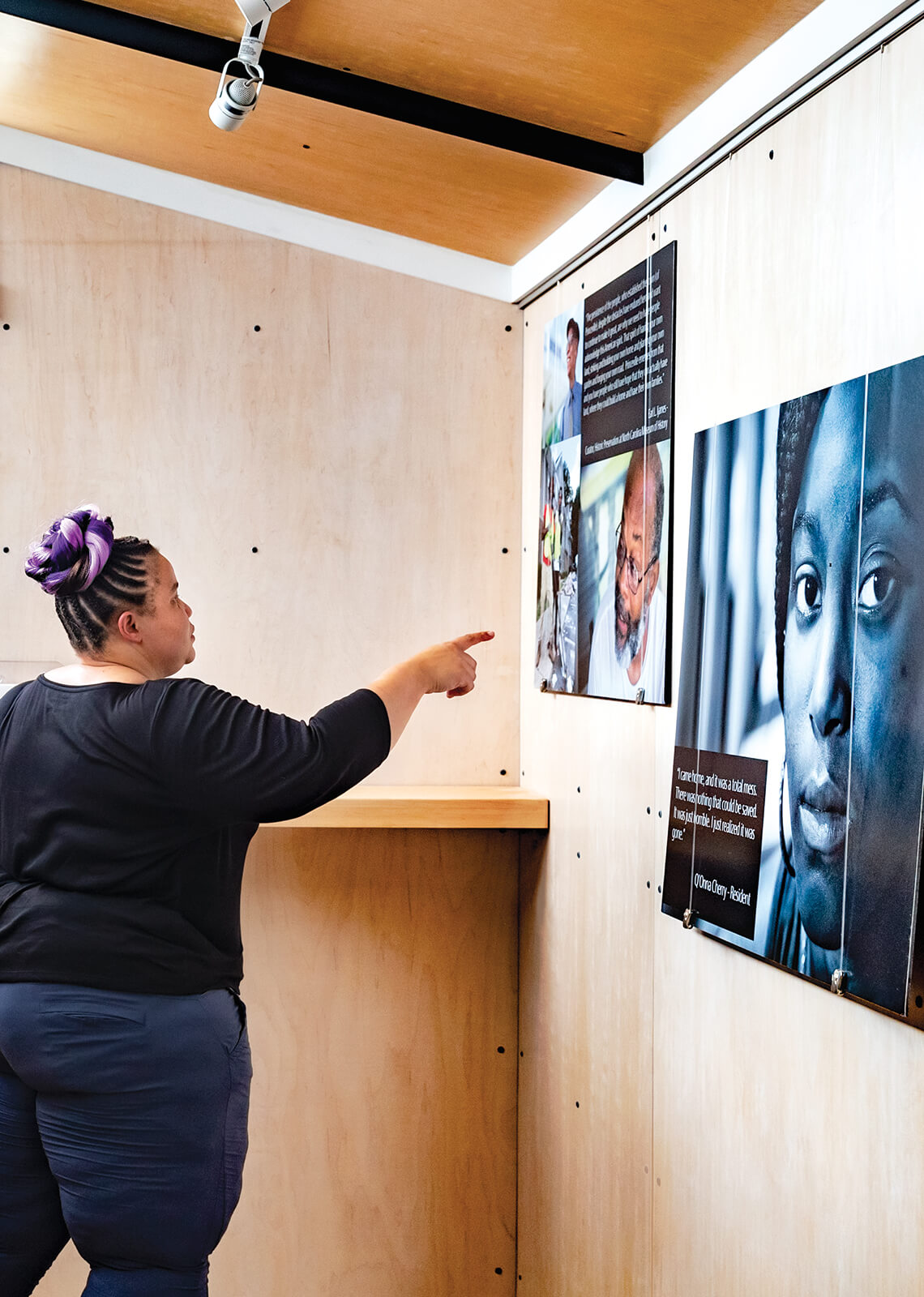 Turner Prince was a carpenter. Formerly enslaved, he’s credited with creating some of the first buildings at Freedom Hill. Slowly, the land awakened: Homes went up, as did grocery stores, juke joints, churches, and a hotel. When Freedom Hill was incorporated, the citizens decided to name their new town after that pioneering builder who helped make it possible. They called it Princeville. Early residents turned the area into a thriving community, and current residents still hold great pride in the innovations and creativity that allowed the first settlers to transform something once thought to be worthless into something beautiful.

But the people of this low-lying land have always had one enemy: water. Princeville’s proximity to the Tar River means minor flooding whenever it rains, and major flooding when there’s a hurricane. The people living here have always found ways to survive, to work with the water, but as the storms that come their way get larger, the resilience of Princeville’s residents is starting to wear thin.

Many residents thought Hurricane Floyd would be the apocalyptic event of their lifetime. In 1999, that storm, which spawned off the coast of Cape Verde, sent the Tar River cresting to 42 feet, overwhelming the dike that was built in 1965 to protect the town. The water came at night, and it had never been so high. The dark currents from the Tar seeped into homes, threatening to carry away people’s belongings: their history, their photos. It took 10 days for the place to dry out.

Most folks came back to rebuild.

Then came Hurricane Matthew. It started in late September 2016 as a tropical wave off the coast of Africa, but by October 1, it was a Category 5 hurricane moving through the Caribbean, churning up water, eating up ground, and ripping the roofs off of homes. When it reached the North Carolina coast, its winds pushed the water up the river systems in the region, and the 14 inches of rain that battered Edgecombe and surrounding counties sent the Tar River surging, cresting at 36 feet, overwhelming the protective dike once again. Princeville, for the second time in 20 years, was underwater.

The clouds dissipated; the sun came out. Eventually, the town dried up, and the people living along the Tar started to pick up the pieces. With two biblical floods in two decades, fewer people returned to rebuild. The town’s residents wondered if the world had forgotten about Princeville. 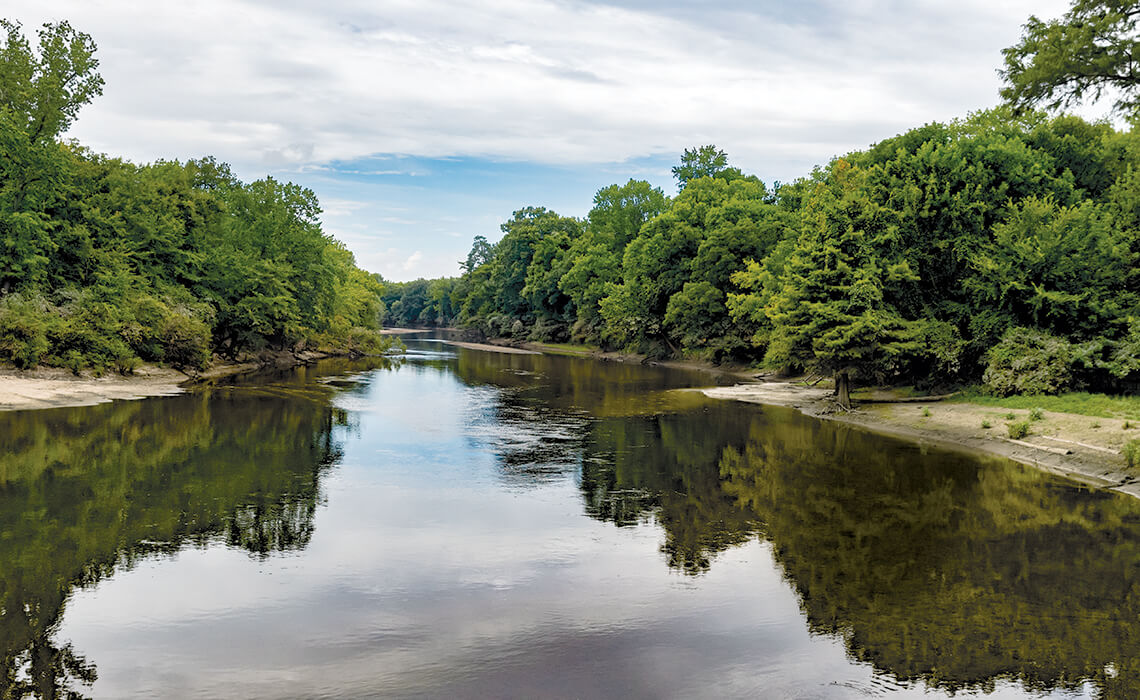 During Hurricane Floyd, flooding along the lower stretches of the Tar River reached levels that scientists say are likely to happen only once in 500 years. photograph by Charles Harris

Some have moved on. Linda Whitest lost just about everything in the 1999 flood — clothes, furniture, old family photos. The water from the 2016 hurricane didn’t come up as high, so she got to keep a few pieces of the artwork she had been collecting for almost two decades. Still, when she was offered the chance to rebuild in Princeville a second time, she declined. Even though her family had lived here for more than 100 years, Whitest chose to leave. Surviving storms changes people. “Mentally, physically,” she says, “I just cannot go through it again.”

The town’s officials wonder about what has been lost. Most of the buildings need major repairs. The Welcome Center remains closed. The old Princeville Museum sits vacant, its walls having been ripped out so that the structure could dry fully. The floors are just slats of ancient wood, not meant to be walked on. All of the displays are gone. 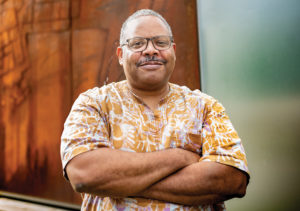 When Kofi Boone, a professor of landscape architecture and environmental planning at NC State, brought a group of students that he works with to Princeville in 2018, the teens were dismayed to find that there was little left of the town they’d heard so much about: a couple of overgrown yards, neglected cemeteries, and precious few houses. With the town’s buildings still boarded up, there was nothing to tell the story of this historic place. The students were left with a desire to learn more.

“If this were Jamestown, or some other major ‘first’ in America,” Boone says, “there would be no question about protecting it. We’ve got to do everything we can to protect and to nurture this place, ’cause it’s important to history.”

Serendipity is a precious thing. It means that things prayed for can be made real. It makes hope tangible. When a building project that students of the Design + Build studio normally undertake in the summer months fell through, Boone remembered Princeville and encouraged a collaboration. Guided by instructors Ellen Cassilly, Erik Mehlman, and Randy Lanou, the students came up with the idea of the mobile museum, which could be a traveling educational exhibit and could be moved if the town flooded again. The group decided to make the structure out of corten steel because when the material meets water, it rusts and hardens, protecting the structure underneath — a nod to the town’s strength in the face of natural disasters.

Town Manager Glenda Knight likes that the museum considers Princeville’s needs. With a dwindling tax base, the town can’t provide a full-time docent for the museum. But in the mobile unit, she says, “everything in there is self-explanatory. It’s a condensed version of the [old] museum — we have portraits of humanity there, displaying different people of the community.” 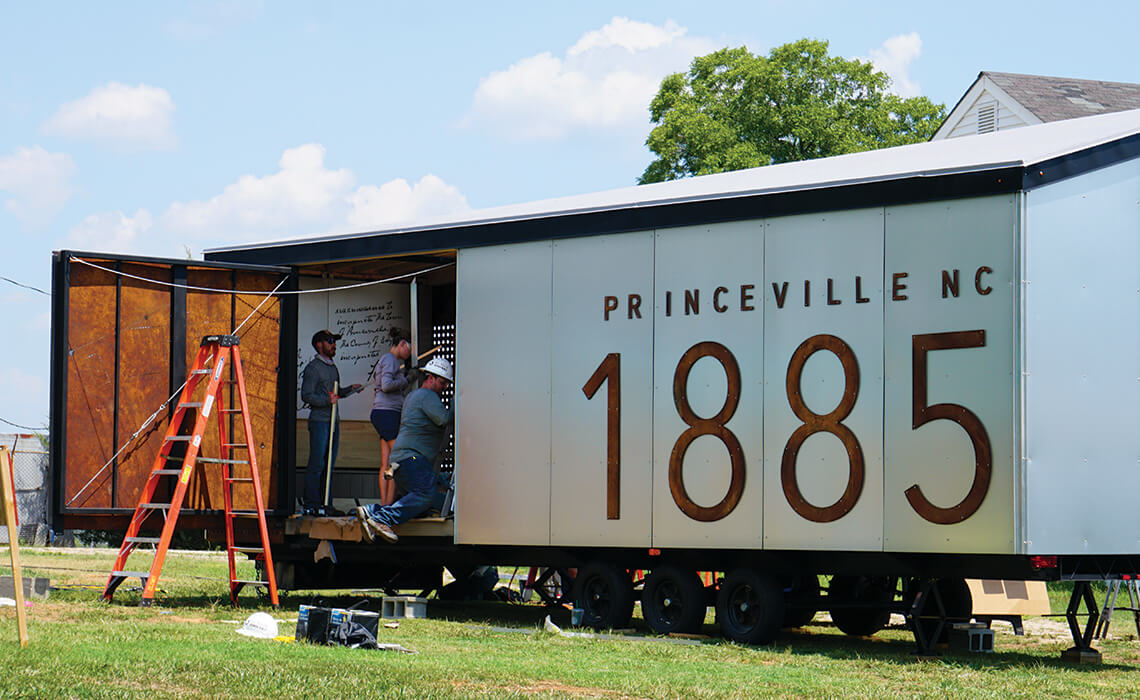 NC State students spent the summer of 2019 building a durable mobile museum that temporarily replaces and will later supplement the old permanent museum, which was damaged by floodwaters. photograph by Charles Harris

Curtis Murphy’s portrait is one of those featured in the mobile museum. He and his wife won’t buy good furniture anymore because they know the town could flood again. But this is home, always has been, so they return. Their love story started when Curtis saw Augusta at a Princeville card game. For more than 40 years, they’ve loved and lived here. There have been calls to move the entire community. Murphy is against the idea. “If they move the town, Princeville won’t be Princeville anymore,” he says.

The town’s fate is still undetermined — hurricane season is underway, and while federal funds for a better levee system have finally been approved, there is much to be done. The mobile museum is one way to help preserve the town, a way for people across North Carolina and the entire nation to learn the story of America’s oldest Black municipality.