At East Frank Superette & Kitchen, young families and lawyers from the nearby courthouse gather around small tables between shelves stacked high with merchandise that elicits laughs and nostalgia — rubber chickens and whoopee cushions, bygone candies and curated stationery.

On one wall of the downtown Monroe restaurant, a beer and wine fridge holds a mosaic of splashy cans and bottles. The other walls are decked with doctored paintings, Elvis memorabilia, collectibles, and a family of marionettes that strike poses above the lunch counter. There, diners chat over lunch plates like the Big Ugly Baby Meatloaf Sandwich, a hearty slice of scratch-made meatloaf topped with Swiss cheese, caramelized onions, and ketchup spiked with smoky gochujang (a sauce similar to sriracha), all sandwiched between two pieces of white toast.

Those familiar with Charlotte may recognize this more-is-more aesthetic from the city’s Common Markets, and with good reason: The masterminds behind East Frank are the same. 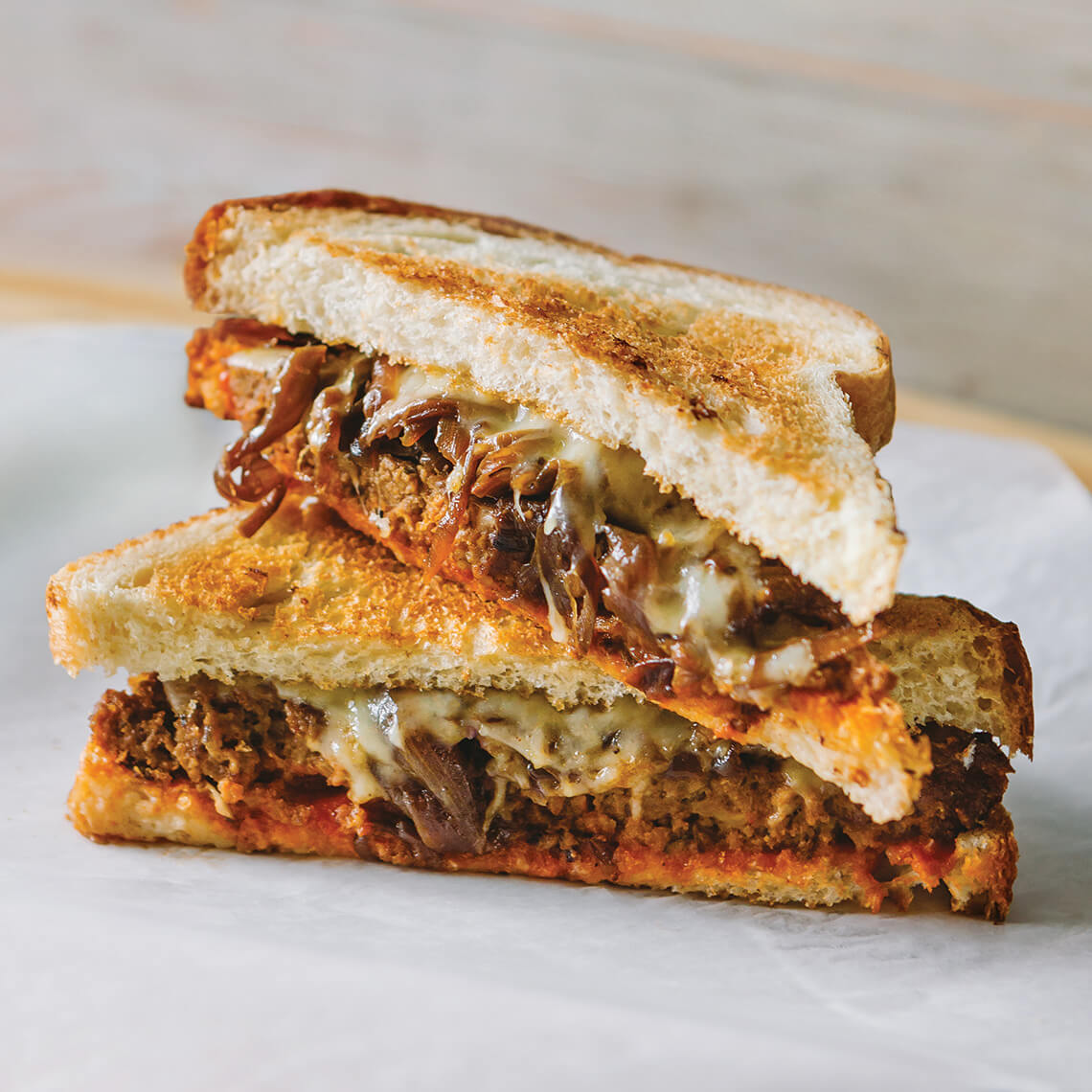 The Big Ugly Baby Meatloaf Sandwich is one of more than 15 sandwiches on East Frank’s menu, alongside salads and breakfast dishes. photograph by Joshua Vasko

Blake and Cress Barnes launched the original Common Market in 2002, eventually bringing on former employee Carley Englander to help open and run the sandwich and variety shop’s additional locations. But after 15 years in Charlotte, Cress says, the Barneses were hungry for small-town living. When they found a historic house in Monroe, Cress and Blake, a native of nearby Wingate, moved south; Englander and her husband, Robert Huffman, soon followed.

The partners saw potential to bring a new kind of business to Monroe’s up-and-coming downtown. In Charlotte, Englander points out, they established Common Market locations in growing neighborhoods. By doing the same in Monroe, they could become part of the effort, already gaining steam, to “move this town in a really cool direction.”

East Frank opened in March of 2019, hawking wares, wine, and beer. Food followed in December of that year, and since then, the restaurant has offered breakfast, lunch, and dinner seven days a week.

Englander curated the menu to feel accessible, but she also wants to push diners’ palates. Vegetarian and vegan options are some of the most popular items on the menu, especially for breakfast. During lunch, substantial sandwiches and wraps are paired with sides like garlicky cheese grits and desserts like strawberry shortcake, and washed down with old-fashioned bottled sodas.

On Thursdays, Englander lets her creativity loose on customers who stop by for a wine, beer, or cider tasting, curating rotating tapas that range from grilled Halloumi cheese over minted tabbouleh to sesame-crusted seared tuna. Whenever possible, she sources produce from local growers, including several of East Frank’s customers. “We’ve met so many people, and we have so many connections,” Englander says, pointing to ingredients like mushrooms and honey that come from customers turned vendors. 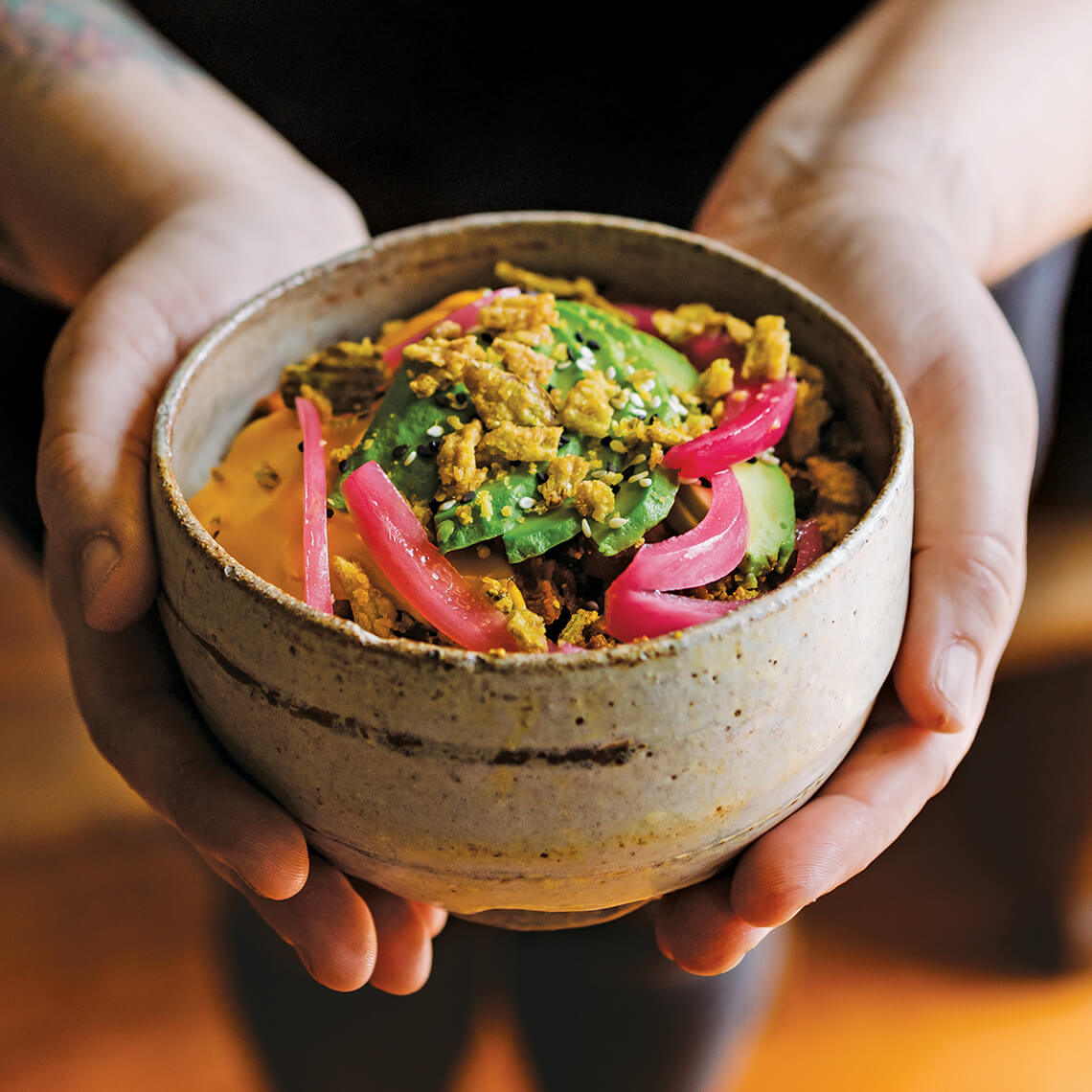 East Frank’s partnerships extend beyond its own walls, following a trend set by other downtown establishments. “The businesses that are here are doing a really good job creating events and working together to make things happen,” Englander says. Along with nearby businesses like Southern Range Brewing Co. and Peddlers Paradise, East Frank hosts events like themed bar crawls, designed to show visitors the breadth of downtown Monroe’s offerings. From spring to early fall, the restaurant also hosts its own weekly pop-up farmers market, featuring local purveyors like Winding Brook Farms and Five Forks Sustainable Farm.

With the reopening of the historic Dowd Center Theatre and the arrival of the Monroe Science Center, the draw of Monroe’s downtown — and East Frank’s place in it — is only growing.