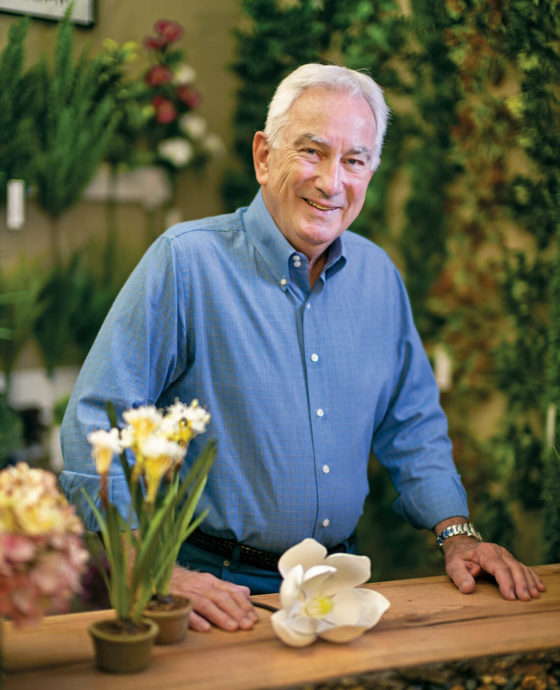 Ed Glenn loosens his scarf and ducks into the oasis of Tiffany & Co.’s flagship store, escaping the chill of New York City’s Fifth Avenue. Tiffany’s iconic robin’s-egg blue greets him as he scans the room. Most of the customers are heads-down in diamonds, but Glenn, an artist from Greenville, is more interested in the gems above the display cases: eight subtle gray vases, each filled with almost 100 stems of delicate white orchids, rising five feet into the air.

The flowers also catch the eye of a fellow shopper, who pauses to admire the arrangements. “How often do you have to replace those?” she asks an employee.

Glenn knows the secret: Those orchids weren’t flown in from the tropics. Each petal was handcrafted, each stem and leaf the product of an artist’s vision. The flowers won’t need replacing for a long while. They’re copies, blooming from Glenn’s imagination and skill. 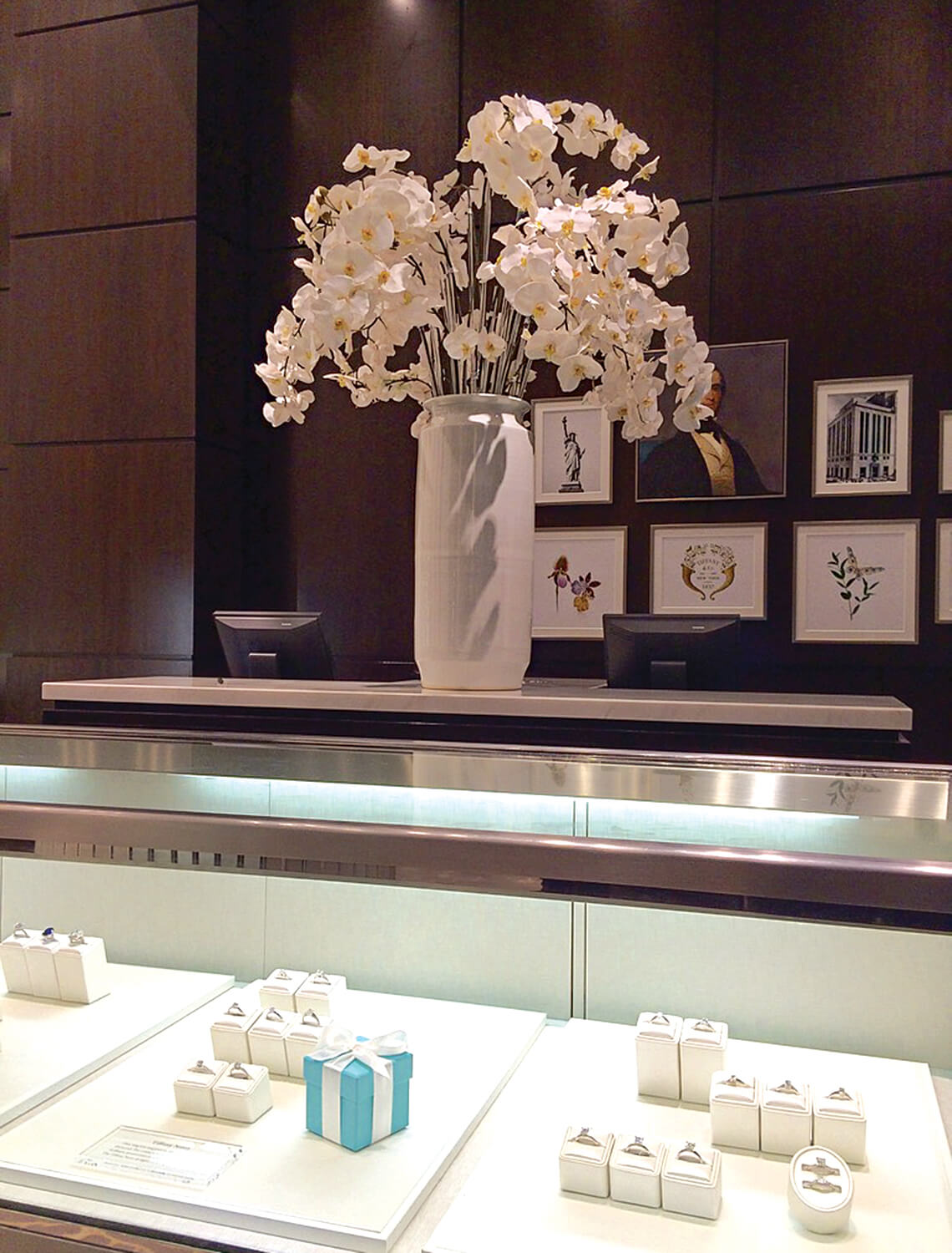 In his Greenville workshop, Ed Glenn uses his handmade orchids in arrangements that are right at home in Tiffany’s flagship store in New York City. photograph by Charles Harris

Today is the first day that Glenn has seen these orchids on display. He shipped them from his Greenville-based company, New Growth Designs, where he works with 15 employees to create artificial flowers and trees for the design trade. The arrangements were then positioned and adjusted by Tiffany’s visual merchandising team.

Tiffany’s heavy glass door swings open, and another shopper bursts in from the cold. For a brief second, the wind also whips in, gusting over the orchids’ petals. Each flower sways before settling into position, resilient to the breeze. “Things like that, I notice,” Glenn says. “Maybe others don’t.”

When he was a college student majoring in music at Converse College in Spartanburg, South Carolina, Glenn’s favorite part of theater was set design. “I loved the way a performance came together. The set, the costumes — every detail contributes to the finished product.”

And just like a set, if you don’t get the foundation of a floral arrangement right, it’s not going to work, Glenn explains. You want to have enough support in each orchid stem that it can be manipulated and hold its shape. But you don’t want it to be so stiff that it loses its spirit or sense of character.

“I think this is a bit of a performance, doing this sort of thing,” he adds. “Like setting a stage, we start with the raw branch and gradually add to it, trying to keep it as natural-looking as possible.”

“I started playing around, trying to figure out how to do something that would fool the eye … that would make it through the event.”

Glenn’s path from music and theater to artificial flower design was forged by his wife, Jef, who took the reins at her family’s second-generation fresh flower shop while he taught as a faculty member at ECU’s music school.

One week, just for fun, the two attended a floral design workshop in Chicago. When they returned, Glenn found himself spending more and more time with Jef, helping arrange flowers for big events and weddings — they even supplied the arrangements for state dinners at the White House. He loved every minute. “Each event felt like creating a new fantasy,” he says.

But in eastern North Carolina, some flowers are hard to come by. “It’s not like being in New York City or Chicago or Miami, where you can readily visit a big flower market and get anything you need,” he says. He and Jef would order flowers and have them flown in. “Even in the best of circumstances, flowers like lilacs wouldn’t consistently hold up very well.”

That’s when Glenn first had the idea to fake it. “I started playing around, trying to figure out how to do something that would fool the eye that I could mix in with the fresh to give us that sense of security that we would make it through the event — and hopefully beyond — without getting embarrassed.”

It worked, and New Growth Designs was born. Eventually, word spread of eastern North Carolina’s artificial flower prodigy, and Glenn’s phone rang with designers from high-end brands like Saks Fifth Avenue, Nieman Marcus, and John Hardy calling after his services. “They’d usually been encouraged to call by a colleague who’d seen our work somewhere else,” he says, laughing.

Those callers appreciated the beauty of Glenn’s creations and were able to get past the stereotypical image that people think of when they hear “artificial flowers”: oversize plastic dollar-store bins packed full of flat pastel roses — knockoffs that can add color, but not life. “Those give artificial flowers a bad name,” Glenn says. “Most of the flowers you see at the big-box stores are stamped out, die-cut, and stacked on a stem.” 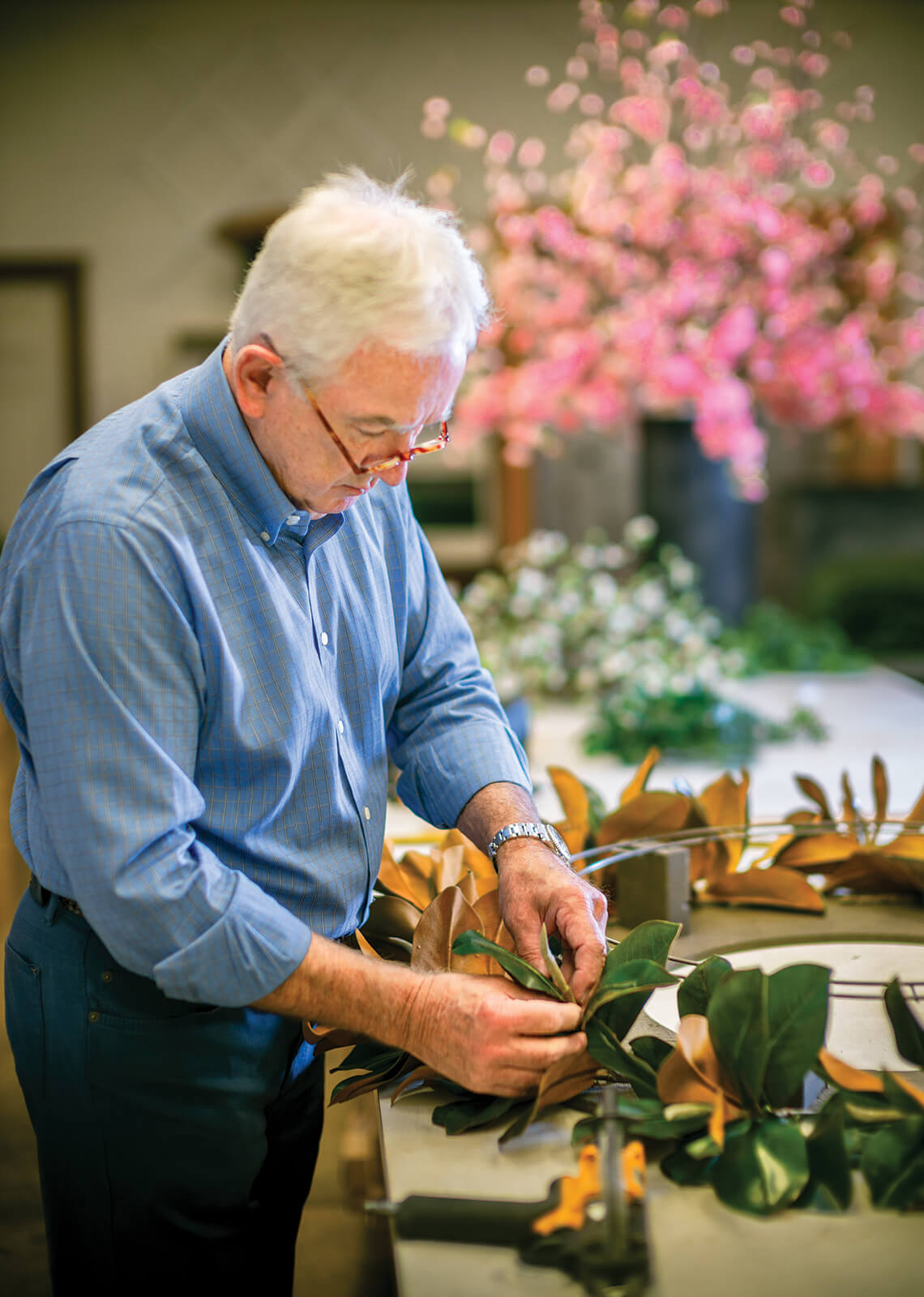 Ed Glenn (above) takes a hands-on approach to floral design — even when the materials are man-made. For his 24- and 36-inch magnolia wreaths, hundreds of leaves are meticulously attached to the frame, one by one. Succulents (below) are known for their durability, but the real ones don’t come close to the plants that Ed creates. photographs by Charles Harris 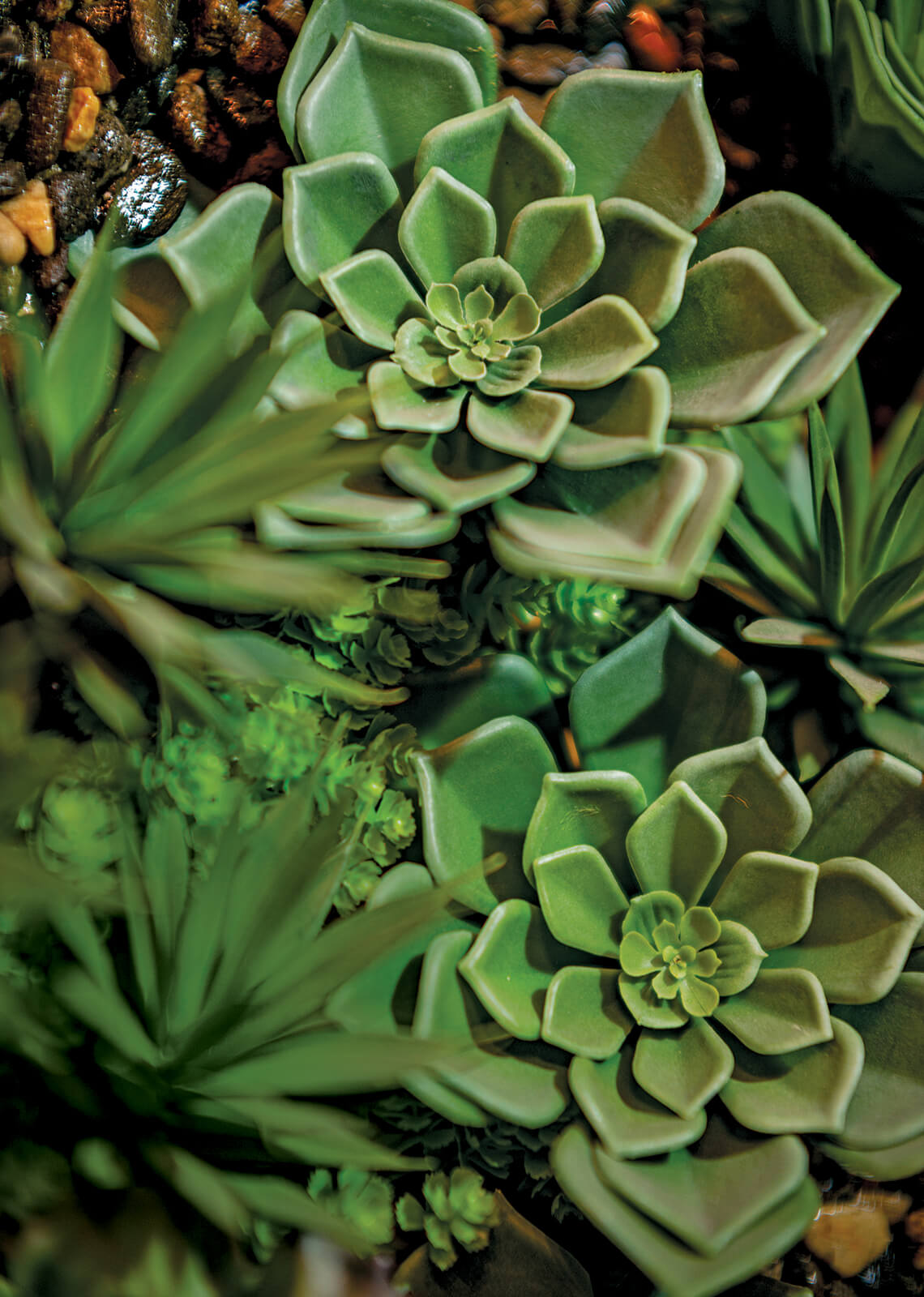 Glenn does not stamp out his flowers with one or two colors. Instead, he studies real flowers and designs each delicate petal to reveal small subtleties in color, using techniques such as waterpress, in which petals are saturated with layers of color, imbuing a dreamy watercolor effect. His team of artists paints the petals’ tips. As they paint, they selectively apply color that bleeds through with lifelike accuracy. For some flowers, they hand-curl the edges of individual petals with a curling iron. Finally, details are added to the flowers’ stems; poppy stems, for example, are “flocked” with tiny hairs.

“You want to be able to fool people from a few feet away,” Glenn says. Because the flowers are handmade, each one is unique, just like flowers found in nature. Some petals are a bit more open than others, curled with just a little more heat. Others have tiny imperfections, like the barely noticeable holes he strategically burns into rose leaves. “Because,” he explains, “aphids love them.”

Spring rewards the world with a bouquet of colors, but winter sets the stage for a dramatic performance. Though Glenn finds inspiration in all seasons, he’s deeply captivated by winter’s forms. “I love this time of year because you see the shapes of the raw trees and branches,” he says. “There’s nothing prettier than a beautiful branch dropped into a vase.”

When Glenn takes walks around his neighborhood, he pays attention to the way plants grow. He notices how some plants spread in an asymmetrical way, while others seem repetitious. “Some are gnarled because they’re trying to reach for the sun,” he says. “They’re competing for sunlight and nutrients in the midst of a forest full of trees.”

Usually, Glenn can’t help but daydream of how these flowers would look if they were to bloom under his own design. He snaps a photo or takes a clipping to his team, and together, they brainstorm ways to re-create it.

Their latest invention is Glenn’s Enduraleaf line — artificial trees and shrubs that are designed for outdoor use, adding greenery to rooftop gardens. Designed to resist UV fading and last at least five years, Glenn’s faux trees thrive in cities where the sun is brutal and water is a precious commodity. 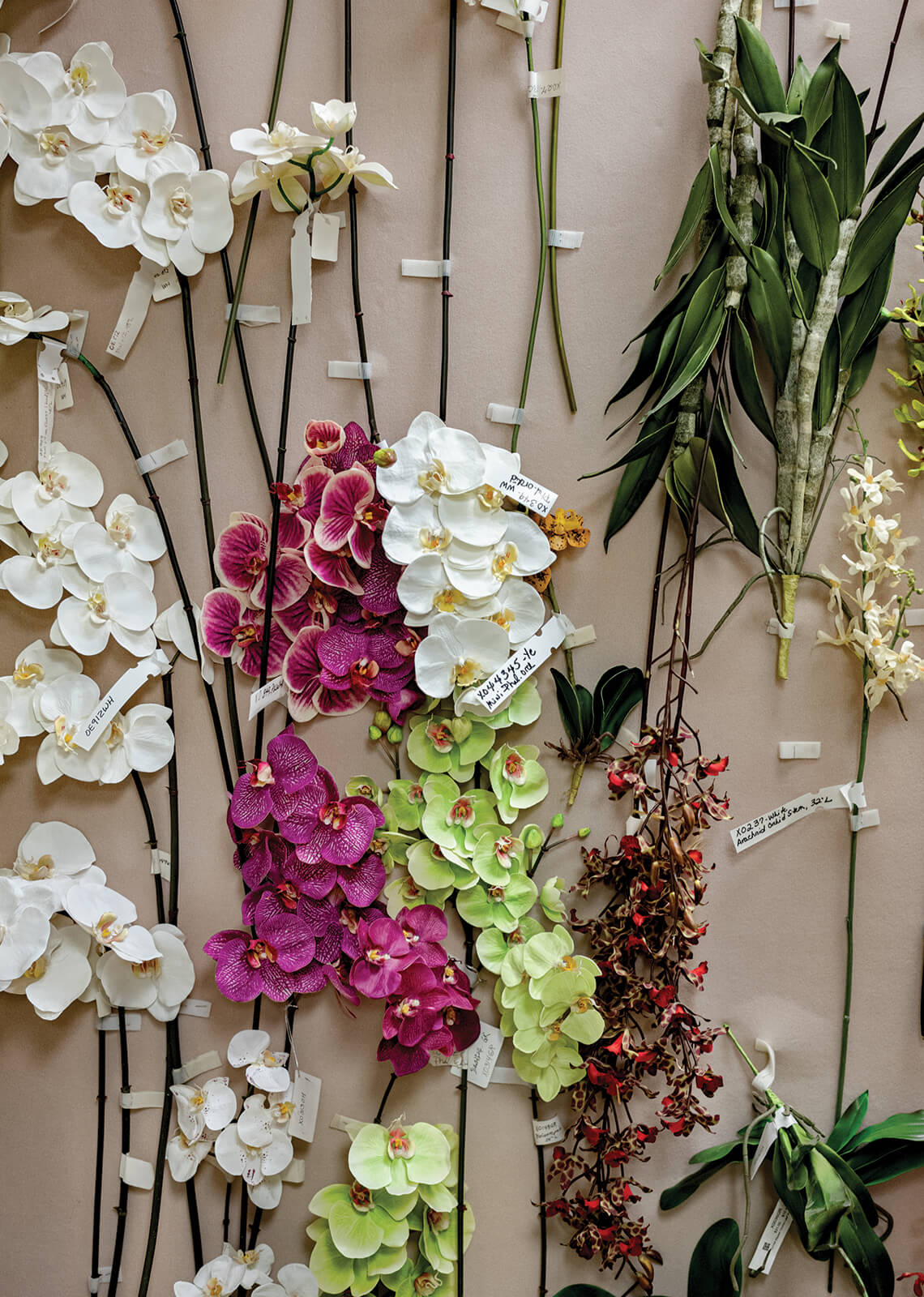 Some of Glenn’s handmade orchids, created in Greenville. photograph by Charles Harris

These were all benefits that Glenn considered when he first began to design trees, bushes, and even grass. “But I never considered other advantages companies have pointed out, like eliminating the need to install irrigation systems or special drainage,” he says.

Even with the success of New Growth Designs, Glenn still loves to work with fresh flowers. They’re his muse, after all. He’s drawn to their intricacies and their blemishes. “Maybe we’re all striving for perfection, but we all have imperfections, and that’s what we’re trying to capture with the spirit of a flower or a plant,” he says. “That’s real life.”