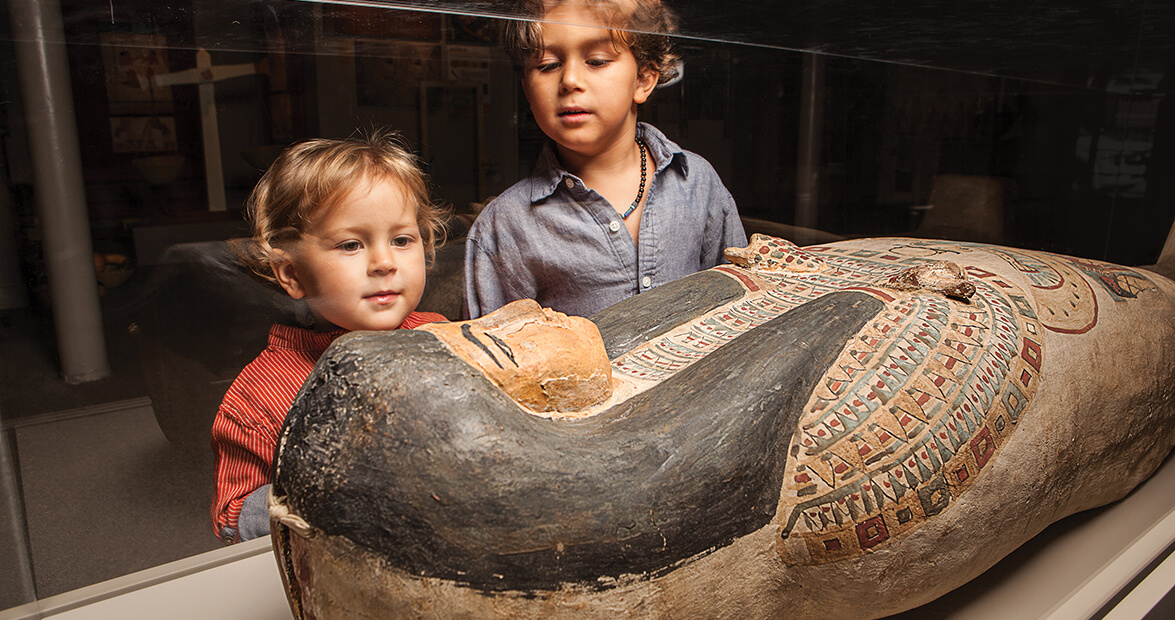 Her real name is lost to history; her formal name now is Tuttina — a feminized reference to King Tut — but the locals don’t call her that.

“To the outside world, she’s a 22nd-dynasty Egyptian mummy, but to Statesville, she’s Margaret the Mummy,” says Melinda Herzog, executive director of Iredell Museums. “The kids here have been eager to see her, and their parents — and even their grandparents, in many cases — remember going to see her when they were kids, so they’re excited about seeing her again. She was an icon in Statesville.”

So how did an Egyptian mummy — North Carolina’s only Egyptian mummy, by the way — end up in Statesville, some 6,000 miles from Egypt? It’s the first question people ask, according to Herzog.

Margaret’s journey as a mummy began in the desert oasis of Al Faiyum, Egypt, which spanned 943 to 720 BC. In the 1880s, a Baptist missionary serving in nearby Luxor found the mummy and her cartonnage — essentially, her mummy case — and brought her back to the United States. He donated her to the museum at Crozer Theological Seminary in Upland, Pennsylvania, where she remained for several decades.

When that museum closed in the mid-1950s, a Statesville paleontologist named Richard Casanova acquired it for the new museum opening in his town.

“He said it was what the children here needed to see — they needed to see a broader world,” Herzog says. “He also thought it would be a great start for the museum, and in fact, it was only the second or third item in the museum’s collection.”

For a few decades, Margaret — named by a local child in a museum contest — was mummy dearest, easily the museum’s most popular exhibit. In the early 1990s, though, the museum — housed in a renovated water-pumping station — began to experience flooding problems when a nearby creek rose too high, threatening the treasured mummy.

“There was one occasion when Margaret was actually carried overhead out of the rising waters in the museum,” Herzog says, “and we realized we could no longer keep her there.”

Margaret went into dry storage for the next two-plus decades — with the exception of a few guest appearances at other museums — before making her long-awaited, much-heralded return in mid-March. By July, more than 1,500 visitors had flocked to the small Iredell Museums’ downtown Statesville location to see the mummy.

Children, in particular — most of whom have never seen a mummy — have been fascinated by Margaret, and museum officials have catered to them accordingly. In addition to a popular CSI lab that explores the process of mummification, the museum has been offering weekly “Mummy and Me!” programs, in which children can build Egyptian pyramids out of toothpicks, make crafts with papyrus paper, paint an amulet, or fashion a colorful mummy mask.

“Our mummy masks have glitter all over them,” says Angel Johnston, the museum’s educational program coordinator, as she helps a table of children make their masks one Saturday afternoon. “I’ve resigned myself to the fact that I’m going to look like a disco ball by the end of the day, but they’re having fun and they’re learning about mummies, so it’s worth it.”