Young Velvet Powell was missing a shoe. Her dress, a flouncy, frilly trifle, was completely soaked. And now, her mother would have to take down, wash, and restyle the child’s long, black hair. But that was the least of her worries. The honey-brown 6-year-old had barely escaped drowning in Jones Lake. 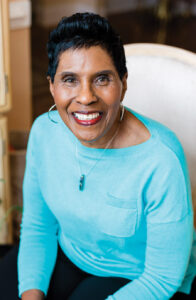 “I could see the sunlight through the water over my head — I just couldn’t get to it,” Velvet Powell Miles recalls with a chuckle, 61 years later. In the end, it was her mother’s careful grooming that saved her: Floating at the water’s surface was Velvet’s thick, plaited rope of hair. A family friend spotted it and hauled her back, braid-first, onto the boathouse dock.

It was one of many instances of luck — or favor, as the saints say — that the Powell family enjoyed as stewards of Jones Lake State Park.

It wasn’t that Jones Lake was dangerous. Quite the opposite. North Carolina’s first state park to admit Black visitors opened its gates in 1939, with acres upon acres of longleaf pines, camping areas, and the biggest draw — a huge, shallow, rust-colored lake teeming with perch. The sandy-shored Carolina bay lake was perfect for a dip, boating, or casual fishing, and with its hiking and campground amenities, the park became popular overnight.

Mr. Dewitt Powell came on as the park’s first Black superintendent in the early 1950s. Sallie Powell, his wife, was a respected math teacher. The family lived on the premises in a house tucked on a dirt road off the main track, its brown wood blending into the foliage. “The special part was looking out into the water, which was a reddish brown because of the leaves from the cypress trees. It was very pretty to me, and free,” Velvet says. “We were free to just run all over everywhere and be ourselves.” 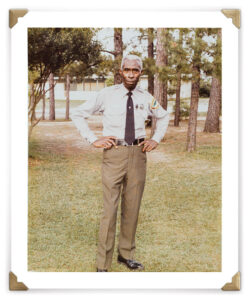 Dewitt Powell was 53 in 1974, when this photo was taken near Jones Lake’s picnic area. He began as superintendent in the late 1950s and served for the next 30 years. Photography courtesy of VELVET MILES

Elizabethtown, the closest municipality, was about five miles away and separated by a bridge, lending to the feeling that the park was in a world of its own. The Powell children’s classmates envisioned the lake as a 224-acre pool that they could swim in whenever they pleased, and the park and shelters their backyard for picnics. Few in Elizabethtown called the park by its government name. It was simply “Mr. Dewitt’s Lake,” a safe harbor from the racial malice of 1950s North Carolina.

And Velvet, Powell’s only daughter, felt nowhere safer. “When I look back, I realize that we were very blessed,” she says. “I didn’t recognize racism at the time because I thought [what we had] was pretty much normal. I’m sure Daddy faced a lot of opposition and many things that we never knew about, but he never mentioned them. As a child, I never heard of the battles that he may have had.”

Powell ran the park with military precision. He’d taken a year of college before enlisting in the U.S. Army, where he quickly achieved the rank of sergeant. But a perforated eardrum returned him to civilian life. Under his watch, the gates never opened a minute late, and the park had the reputation of being the cleanest in the state.

NC Digital Collections has letters written by guests from across the country. Interestingly, Jones Lake’s status as a “Negro park” did not deter white people from visiting, and some of their letters were complimentary. Mr. and Mrs. Alvin Roy of Belle, West Virginia, wrote to North Carolina’s State Parks department on September 8, 1967, gushing over “one of the most beautiful parks we have ever visited.” They were “amazed” at the cleanliness of the facilities and found the staff “kind and courteous even tho [sic] we were of a different race.”

“We never turned anyone away because of their race,” Velvet says. “A lot of the campers were white, but Black people [mainly] enjoyed the water.” 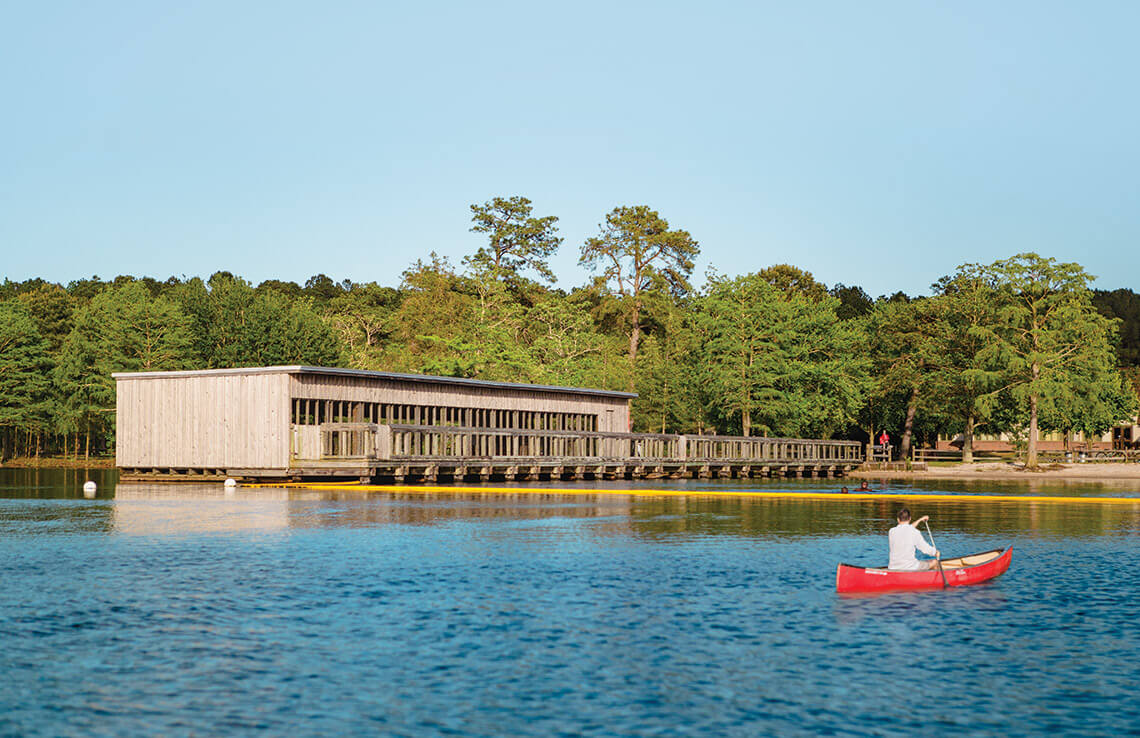 Visitors to Jones Lake can rent canoes and paddleboats from the boathouse, take a dip in the adjacent swimming area, picnic, play volleyball, or fish from a pier just a short hike away. photograph by Baxter Miller & Ryan Stancil

A fanatic about litter, Dewitt Powell instructed his staff that “if it doesn’t grow, pick it up,” remembers Charles McKoy, who worked summers at the park for 16 years. Every speck of paper, every cigarette butt was removed daily, as well as some things that did grow. “He was strict with that — oh my God!” McKoy says. “Would you believe that we had to rake the grounds of pine needles every day?”

In addition to out-of-town visitors, the Black community around Jones Lake embraced the park with fervor, as if it were a second home. The park hosted family reunions and church picnics, and even planned a “Negro Bathing Beauty Contest” back in 1944. But most common, during summers, were the baptisms. Black churches in the area did not have baptismal pools, so Powell scheduled ritual services at the lake before the park opened on Sundays. Sometimes twice on Sunday mornings, church buses would pull into the parking lot and parishioners would crowd the shore. Candidates in white waded into the lake behind their pastors, who prayed over them and then dipped them backward into the water — symbolic of going down into the grave. They broke back into the air greeted by shouts of joy. 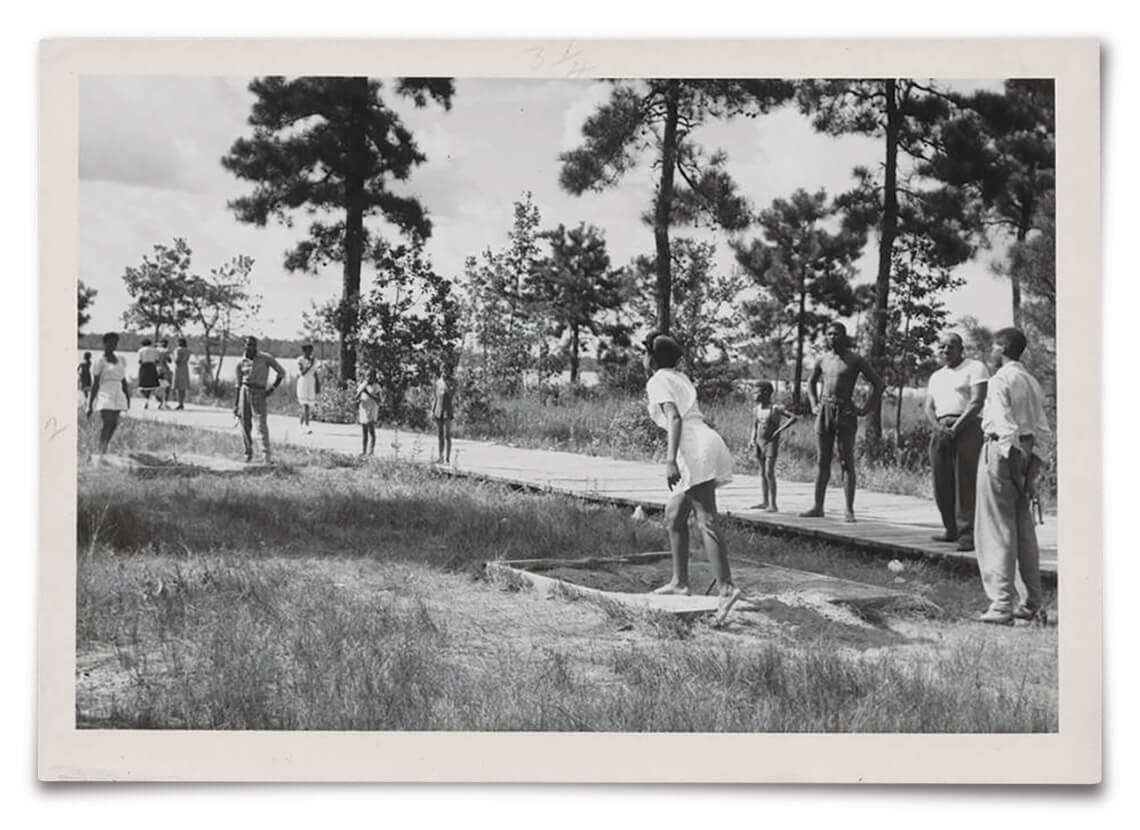 In the 1940s, when it was still the only state park open to Black citizens, families enjoyed playing horseshoes and other activities. photograph by NC DIVISION OF PARKS AND RECREATION

Jones Lake was a haven for Black residents, but it still operated within the constraints of its time. The buildings weren’t modern. The bathhouse, where visitors kept their clothes and other items while they swam, did not have lockers. Rather, a system of unsecured, numbered baskets kept order. On days with many visitors, those baskets covered the floor. The commodes and sinks were old as well. McKoy says that he was sometimes “embarrassed” by the state of accommodations, but Powell’s exacting standards still had to be met. 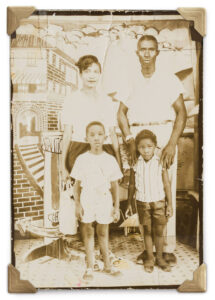 When it came time for Velvet’s family to take their own vacations, they’d head to spots like Atlantic Beach, where this snapshot was taken in 1959 (clockwise from top left: Velvet’s mom, Sallie; her dad, Dewitt; Velvet; and her brother, Dewitt). Photography courtesy of VELVET MILES

“It’s a shame the way they [underfunded] Black facilities back then, when we paid the same taxes,” McKoy says. To compensate, the staff scrubbed everything constantly, checking the bathrooms four and five times a day to make sure they were up to par. “He kept a gold standard,” McKoy says of Powell. “And if you couldn’t do that, you had to hit the road. But he took all of us under his wing, and he made men out of us.”

In fact, Powell made a mission of mentoring youth. He hired students from Fayetteville State University’s swim program to be lifeguards and recruited young men in the community as workers. If parents came to him worried that their sons were at risk of falling into trouble, Powell provided constructive work and a safe place to blow off steam. “They would work all day doing whatever Daddy said: I want you to pick up this paper. I want you to take this over there,” Velvet remembers. “When they finished, they could go swimming. And he would feed them.”

Those mentorships led to lifelong bonds of respect and loyalty. Now in his 70s, McKoy still casually refers to Powell as “my dad.” Years after Powell retired and grew infirm, McKoy, a barber, would come by and cut his hair. J.C., another “son” who worked at the park in his youth, would come by and shave him or assist with baths. “There was just nothing they would not do for him,” Velvet says. “When they needed it, he made their lives meaningful.”

The Jones Lake State Park of today is nearly unrecognizable to its former resident family. Renovations have expanded the covered picnic shelter, and the bathhouse has been completely rebuilt.

A visitor center greets the guests who used to knock on the Powells’ door. A new trail offers access to the 315-acre Salters Lake, another Carolina bay in the park. A bright, air-conditioned classroom rings with voices of visitors in summertime, replacing the shouts of a Sunday morning Holy Ghost good time. 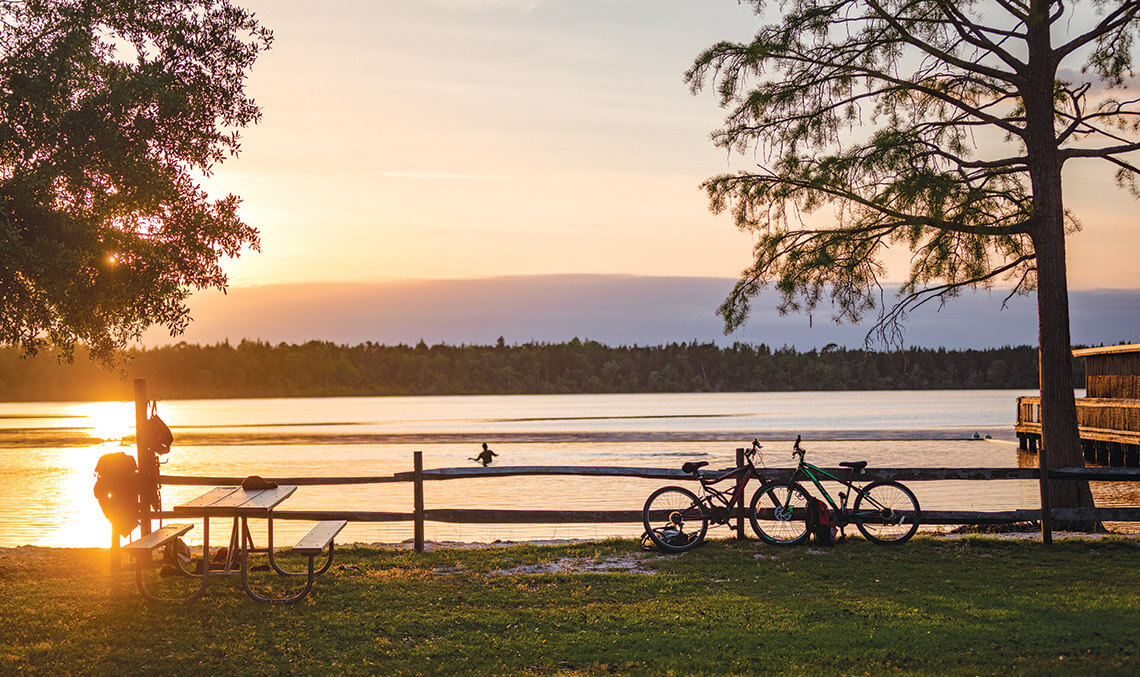 Jones Lake today has all the amenities of a modern park, including a visitor center and exhibit hall. photograph by Baxter Miller & Ryan Stancil

Some things haven’t changed, though: The Bay Trail, a four-mile loop around Jones Lake, still offers gentle sounds of lapping waves and trilling birds. The water, which Velvet loved looking out over as a child, is that same rich reddish brown, evoking that same sense of peace.

But the purpose of this special place has evolved. Now, the legal right to enjoy all of North Carolina’s abundant natural beauty is afforded to everyone. And Jones Lake survives as a testament: the only state park where, from the very beginning, all visitors within its gates could feel unabashedly free.