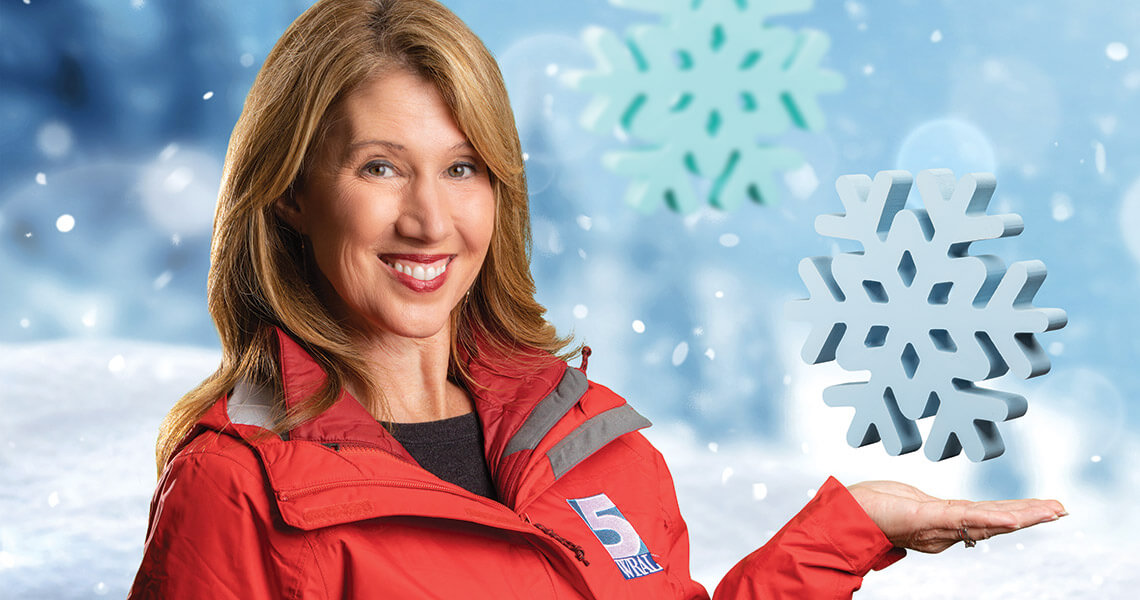 Little plastic saucers swoosh past me, cutting endless grooves on a snow-covered hillside in Raleigh. I’m standing in the thick of it all, dodging renegade sledders and listening to WRAL-TV meteorologist Elizabeth Gardner in my earpiece as she keeps the Triangle area updated on what’s to come. She’s reporting on the melting that’s sure to occur by noon and the warming trend that will settle in over the weekend. The anchors back in the studio soon pitch to me, the rosy-cheeked television reporter wearing a goofy knit cap, to deliver the all-important sledding conditions here at Dorothea Dix Park.

Snow and other big weather events always inspire in me a newfound respect for my meteorology colleagues like Gardner: their stamina to stay on the air for hours, their deftness in explaining the science of weather in terms that we can understand, and their utterly likable demeanor through it all. Nearly two years after that dazzling day at the park, I’m sitting in the warmth of WRAL’s weather center watching Gardner at work. With a few minutes to kill before her next live broadcast, she opens a bag of organic popcorn, pours a few morsels onto a sheet of paper, and takes a swig of sugary Mountain Dew. 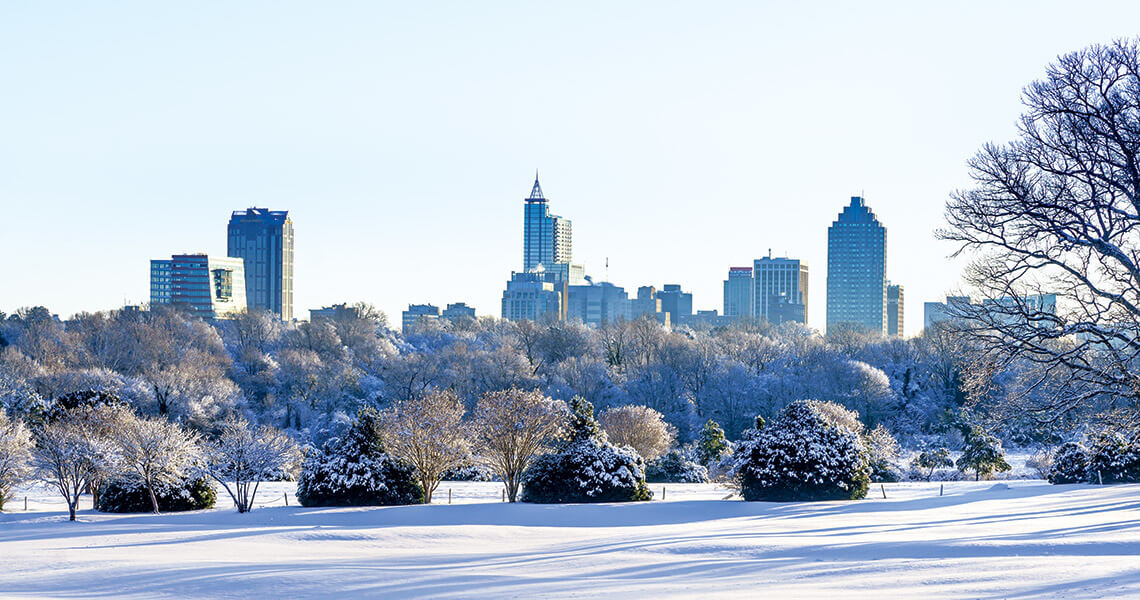 Dorothea Dix Park in Raleigh is the perfect place to play in the snow. photograph by MATT ROBINSON/RALEIGHSKYLINE.COM

Don’t tsk-tsk Gardner about her choice of breakfast. She runs, she skis, she snowboards — and she’s raising two teenagers. Right now, she’s sitting in front of several glowing monitors, one with a map displaying temperatures from Roxboro to Clinton and another showing scattered showers from Oxford to Roanoke Rapids. She’s wearing a pink tie-neck dress that really pops on TV. Gardner’s been at work under the blinding lights of the studio since 3:45 this morning, building graphics and forecasting the weather.

After 17 years as the meteorologist for WRAL’s weekday morning news, Gardner has her routine down to a science. She can be eating a snack, tapping at her keyboard, and talking about her kids’ soccer schedule, all while listening for the floor director to call out, “Lizzy, you’ll be at the BAM.” (“BAM” is the colorful acronym for the very large monitor on the studio floor.) She strides over to the screen, stands before the camera, and delivers a 10-second preview of the forecast. Then she returns to her desk and picks up where she left off. When you have 24 live appearances, including teases and main weather segments, during four and a half hours of news, five mornings a week, this stuff becomes second nature.

Gardner’s deep love of nature and the childlike wonder that she still experiences at the sight of snow are what inspired her to study meteorology. She grew up in Raleigh but yearned to live among the snow-capped mountains of Colorado that she heard about on her John Denver records. She enrolled at the University of Colorado, earned a journalism degree, then spent a few months as a self-described ski bum. After goading from her dad, she landed a “real job” as a TV reporter back home in North Carolina. She worked in the news department at WGHP in Greensboro before realizing early on that she lacked the appetite to spend a career covering politics and crime. When she got the chance to take a job as a weathercaster in Wilmington, Gardner found her calling.

This was the mid-’90s, when TV stations increasingly sought bona fide meteorologists to deliver the forecasts. Gardner needed to learn more about weather before speaking on it extemporaneously for three and a half minutes at a clip, so she signed up for three years of meteorology courses. “Weather is cool because it’s the study of how things work,” Gardner says. She’s moved over to a sofa with a view of the station’s front entrance. Outside, clouds hint at the showers that she’s forecast to arrive by lunchtime. “Everyone wants to know when it’s going to rain,” she says. “It was really fun to learn when and why it was going to rain. And I love snow.”

On snow days, “school was canceled, and the whole family would stay home. We’d all go sledding.”

She remembers snowfalls that were real doozies during her childhood in the 1970s. That decade saw a cooling trend in North America that produced below-normal temperatures and snowy winters across the state. “To be a kid growing up with that snow, there was nothing better,” Gardner says. “School was canceled, and the whole family would stay home. We’d all go sledding.” She smiles, her voice lilting as if she’s telling a story to a group of children. “I feel like people don’t want to let that go. Everybody wants that surprise vacation day.”

When it snows these days, it’s no vacation for Gardner. As winter weather sets in, WRAL suspends its regular programming, and those of us who report the news are dispatched for on-the-scene broadcasts. The days are long and repetitive, but Gardner thrives on it. That little girl, wide-eyed at the freshly fallen snow on pine boughs and oak limbs across Raleigh, still lives within her. “I’ve never grown out of loving the snow,” she says. “I still think it’s so beautiful.” 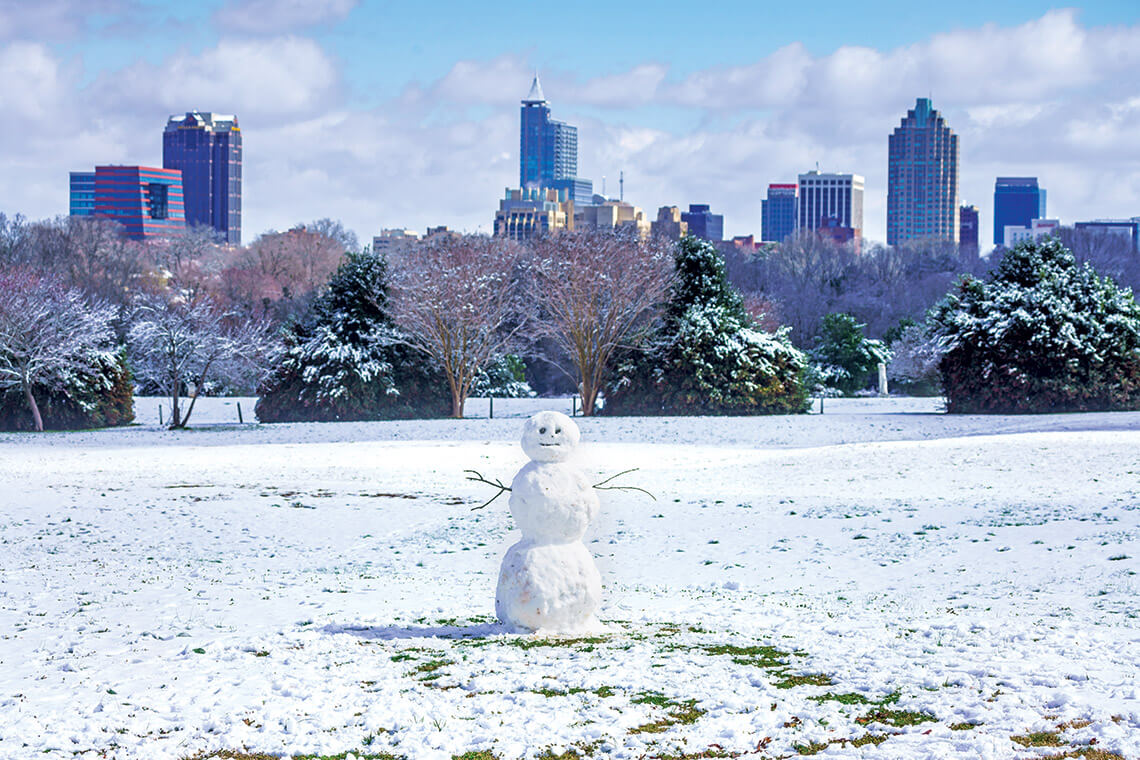 When it snows in Raleigh, as it did in February 2020, kids off from school flock to Dorothea Dix Park, where they sled down a popular hillside and find flatter ground to build a snowman. photograph by MATT ROBINSON/RALEIGHSKYLINE.COM

And so tricky to forecast, especially in central and eastern North Carolina. Snow used to be more reliable at higher elevations and in more northern climes, but it can be hit-or-miss this far south and this close to the warm coastal waters. Mandy Bowers of Apex watches WRAL every morning at 6, and she considers Gardner to be her go-to expert when winter weather is on the horizon. “Having kids in school, I rely on her to give me advice,” Bowers says. “When she says to stay home, we stay home.”

In North Carolina, Gardner says, “so many things have to come together just perfectly for us to have snow. It’s a little bit like an Oreo cookie: You have to have all the layers — the temperature layers and the moisture layers all line up just right for us to get snow, or else we get sleet or we get freezing rain or just rain.”

To Gardner, meteorology is a beautiful fusion of math and poetry.

Gardner will never forget the mighty storm of January 25, 2000, when the clouds dumped nearly two feet of snow on Raleigh. She and her fellow meteorologists thought that the computers predicting so much moisture had gone haywire. “We laughed,” she remembers. “We were like, That’s hilarious. The computer model is out to lunch!” The computers, of course, had the last laugh. For days, Gardner basked in the glow of the blanket of white that cloaked her world.

She knows there are “snow Scrooges” out there. She knows that snow can be inconvenient and even dangerous. But for Gardner, its white mantle inspires awe, reminding her of those existential questions that drove her to her beloved vocation. “Being a meteorologist solves a huge curiosity in your life: Why is the sky blue instead of another color? Why are snowflakes six-sided crystals? Why are they all different and so pretty?” (Short answer: Water molecules are V-shaped, so when they freeze, the opposite charges of each “V” line up with the adjacent molecule and form hexagonal structures.) To Gardner, her field of expertise is a beautiful fusion of science and art, of math and poetry, of dew points and dewy-eyed memories of childhood snow days. She waxes philosophical about it, even as the rest of us just make small talk about cold temperatures and slippery roads.

Gardner’s set to go live again for her main weather segment, which runs about two and a half minutes. At the end of a commercial break, a voice announces, Your No. 1 source for local news! before the anchor comes in with a mention of the clouds that will be hovering during the morning commute. Gardner takes it from there: “Right now, it looks like we’re going to have a gorgeous weekend … Here’s that cold front swinging through, and then around 6 o’clock, we’re seeing some nice clearing …”

When she’s done, it’s back to her desk for another swig of Mountain Dew. Gardner still has the 8 a.m. hour and then noon to go before calling it a day. It’s a day of showers followed by balmy sunshine. But even after nearly two decades of daily forecasts, she still lives for the times when she can utter on TV those dreamy words that bring out the kid in all of us: It’s a snow day!