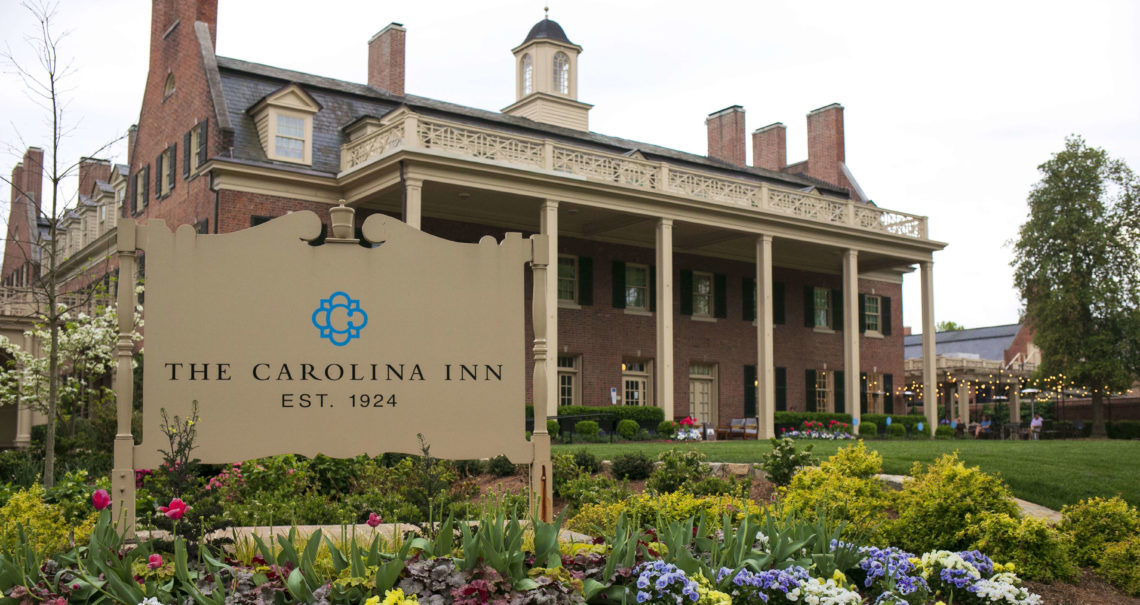 At 5 p.m., the crowd gathers on the grassy lawn in front of the storied Carolina Inn in Chapel Hill, sitting in comfy armchairs on the porch and setting up fold-out chairs closer to the action, sipping and clinking craft cocktails beneath the summer sun, and tucking into food truck fare. Suddenly, the band settles in and the first notes of live bluegrass fill the air.

Every year, folks in Orange County and beyond look forward to Fridays on the Front Porch, a free outdoor concert series that runs Friday evenings from June to October at the Carolina Inn. This classic summer event — and kick-off to the weekend — is a testament to the importance of live music, local food, and community in the heart of this college town.

As the sun sets over the Carolina Inn, the fireflies start to light up the night — the perfect encore to the sounds of a summer evening. But there are many more places nearby to catch a show — and a bite tomorrow. Ready to jam out? If “see more live music” is on your summer bucket list, let us be your guide.

Welcome Back to Orange County

In Chapel Hill, Carrboro, and Hillsborough, streets are buzzing with visitors. As the sun filters down through the majestic greenery of the oaks and pines, you hear the sound of laughter and camaraderie. 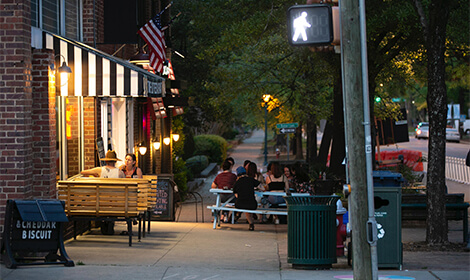 Local 506: This small concert hall has a big following thanks to the eclectic lineup of local musicians and touring bands. Rob Walsh, co-owner and production manager for the Chapel Hill venue calls it “an iconic venue” that has been selling out shows since 1992.

“One of the reasons I moved to Chapel Hill from New York was because of the amazing live music scene,” he says. 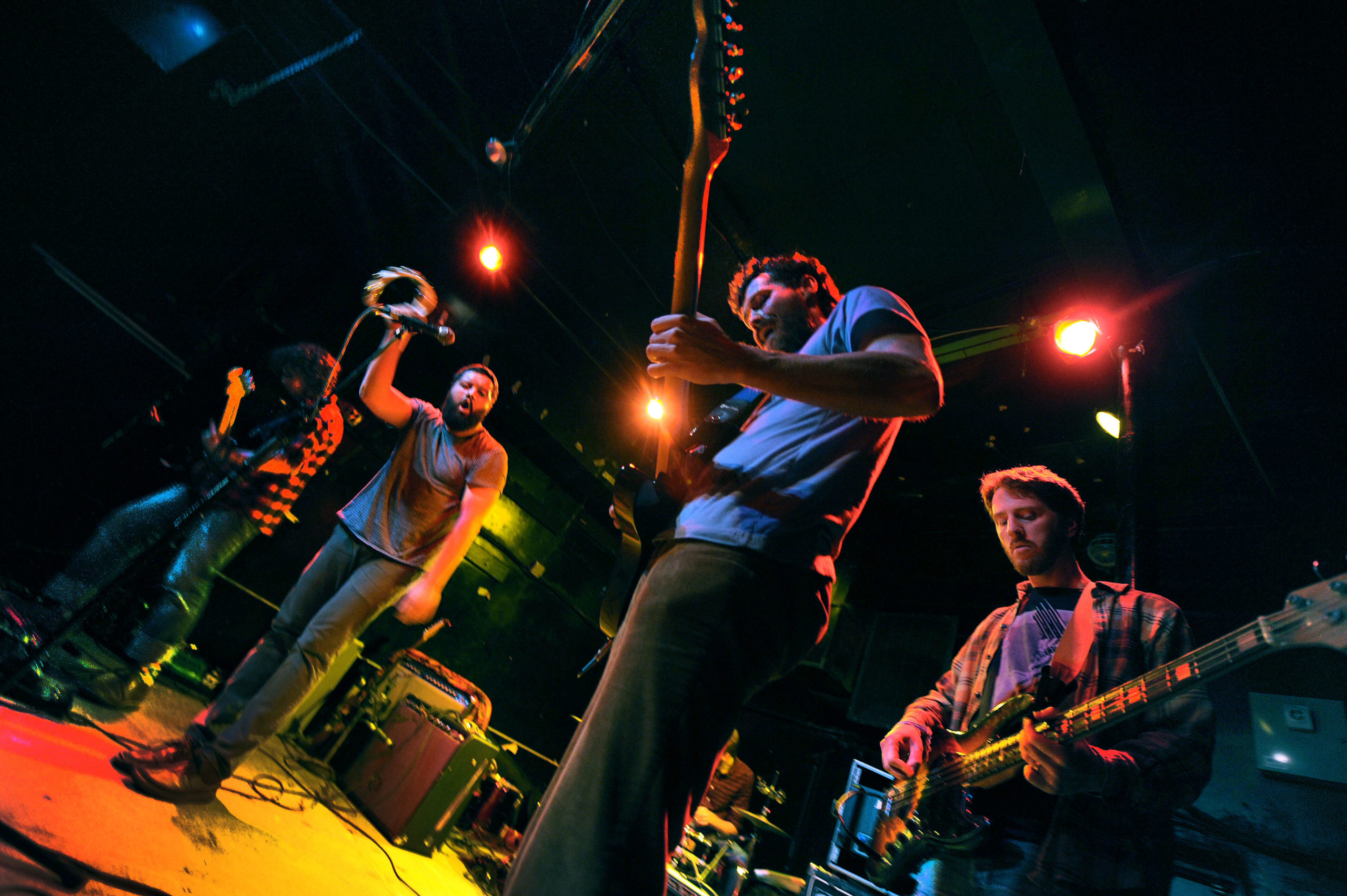 Local 506 hosts several performances each week that range from singer-songwriters to hip hop to punk rock. Although the venue doesn’t serve food, you’re welcome to bring in takeout from nearby favorites like Mama Dip’s Kitchen — a legendary Southern eatery that makes fried chicken, biscuits, and gravy an art — or Luna Rotisserie and Taproom (try the chorizo or pork carnitas empanadas).

Or, after the show, head to restaurants like Top of the Hill, Carolina Brewery, and Que Chula, which offer outdoor seating. Then, top it all off with  frozen yogurt from the Yogurt Pump while walking along Franklin Street. 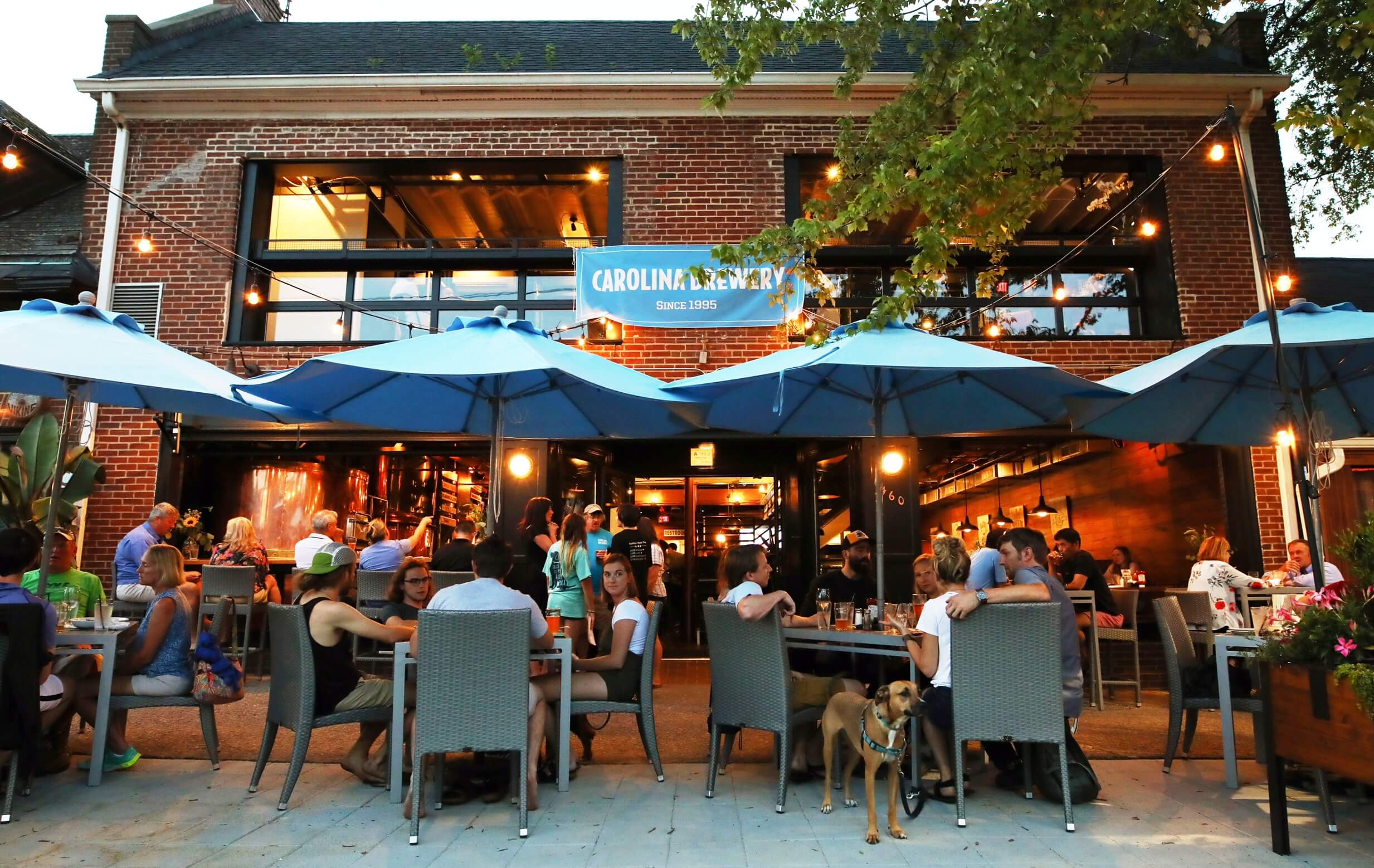 Old East Tavern: This tavern might be best known for smashed pea toast, pimento cheese risotto fritters, and oysters and grits, but the food isn’t the only draw thanks to its live music series.

Owner Julie Paddison launched Saturdays on the Back Porch to showcase local talent like Eclectic 252, Bender Street, and Adam Lee Decker. The concerts are held in the outdoor bandshell from 4 to 6 p.m. on Saturdays.

“You can enjoy live entertainment while you eat,” Paddison says. “It’s the perfect Saturday afternoon, hanging out with friends and supporting local bands.”

Cat’s Cradle: Iconic musicians like Joan Baez, Iggy Pop, and Nirvana have taken the stage at Carrboro’s famous concert hall, so it’s no surprise that the 750-seat venue is hailed as a “beloved institution” and the premier spot to experience live music in the Triangle.

While some of the top touring bands book dates at the Cat’s Cradle, the lineup isn’t limited to national musicians — up-and-coming bands are also featured on the marquis (and their shows are a little easier to get a ticket for!). 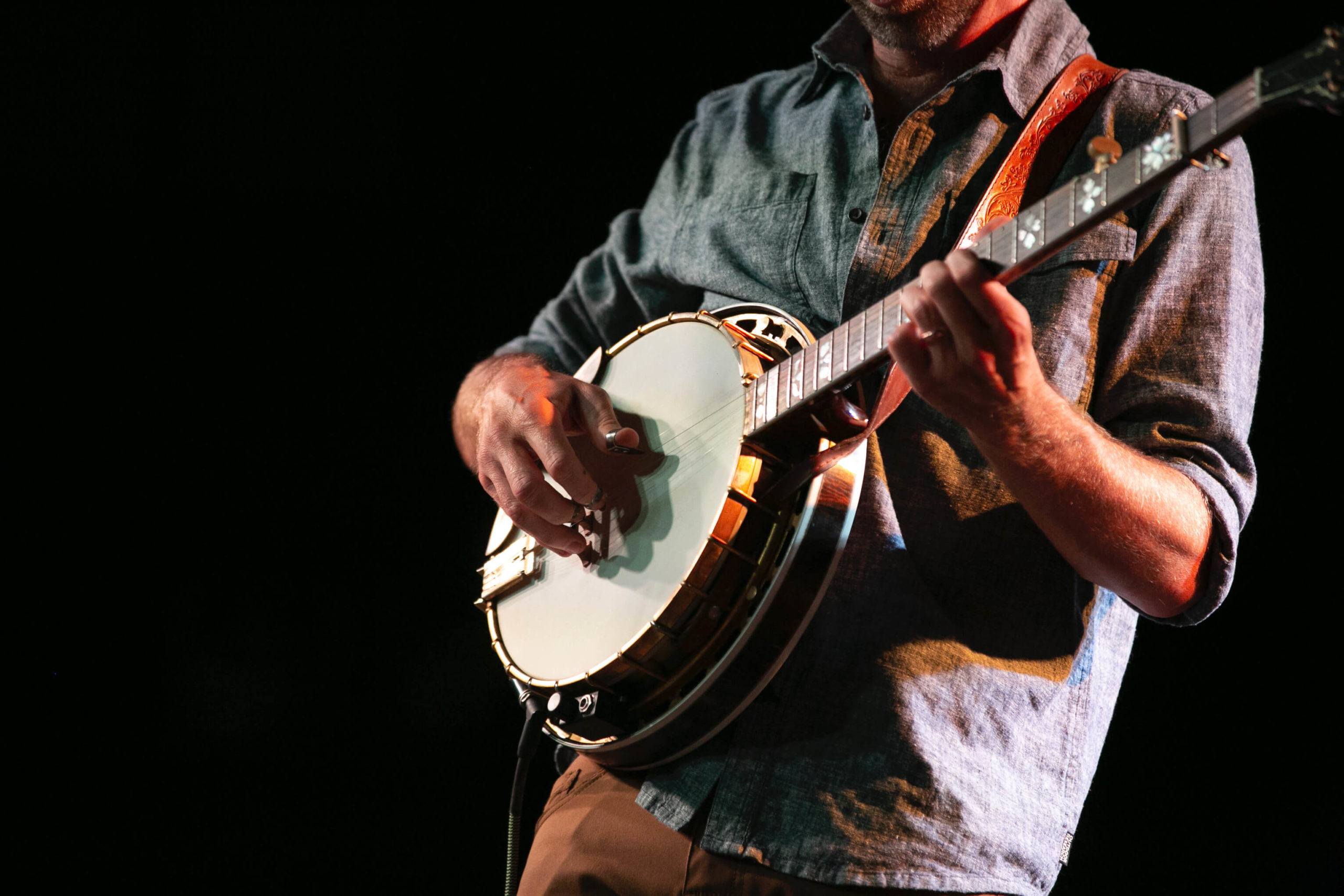 Cat’s Cradle is the premier spot to experience live music in the Triangle, and the lineup features national musicians as well as up-and-coming bands. photograph by SP Murray

Nash Street Tavern: This corner bar in nearby Hillsborough’s West End kicked off its Dog Days Summer Concert Series in July. Musicians take to the stage four times a week, from Thursday evenings to Sunday afternoons — and most of the acts are local.

“The core of our live music is drawn from [local] counties,” says managing partner Drew Bryant. “We even feature a few regularly occurring acts from within a few blocks of the bar — and they reflect the varied nature of the town.”

Rather than creating a bar menu, Bryant focuses on an ever-rotating selection of draft beers and encourages creativity behind the bar. “We’re just as happy to crack a bottle and pour you a whiskey as we are to pull an amaro off the shelf and whip up a bespoke cocktail that suits the mood and the music of the evening,” Bryant says.

Want to top off your night with a sweet treat? Head around the corner — literally! — for a creamy scoop from Whit’s Frozen Custard. 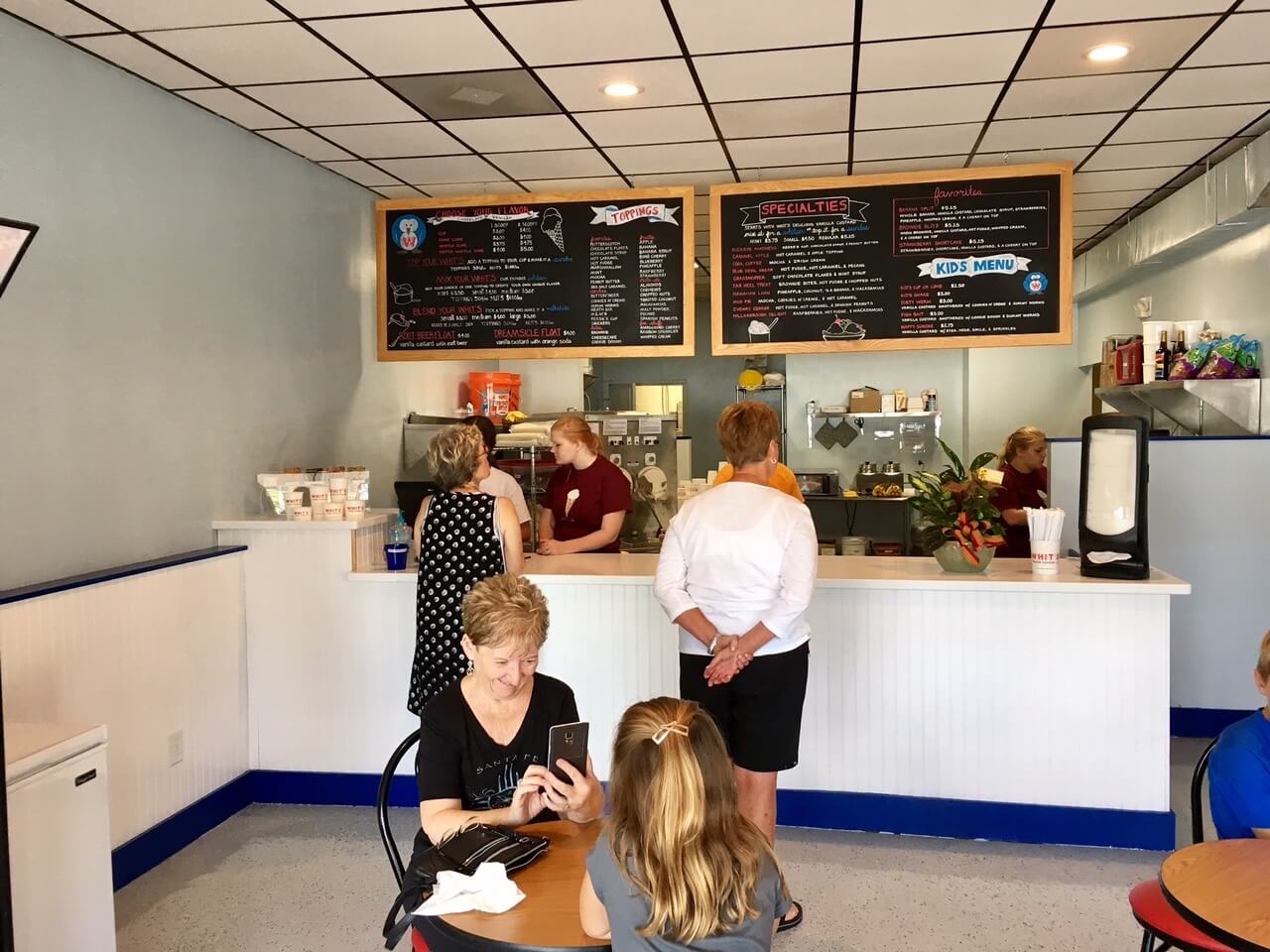 Yonder Southern Cocktails & Brew: Eryk Pruitt likes to think of Yonder as “Hillsborough’s unofficial living room.” And for good reason: He created the space with comfortable seating, filled the walls with a rotating collection of local art, and filled the calendar with live music performances.

Shows include open-mic nights on Tuesdays, jazz on Thursdays, and an ever-changing lineup of local and traveling bands on Friday and Saturday evenings.

“Open-mic nights are one of my favorite nights of the week,” Pruitt says. “We have so much local talent.”

Order a craft cocktail or a beer; dig into takeout from local restaurants — “Nomad (a restaurant specializing in international fusion) will deliver right to your barstool,” Pruitt says — and jam out. 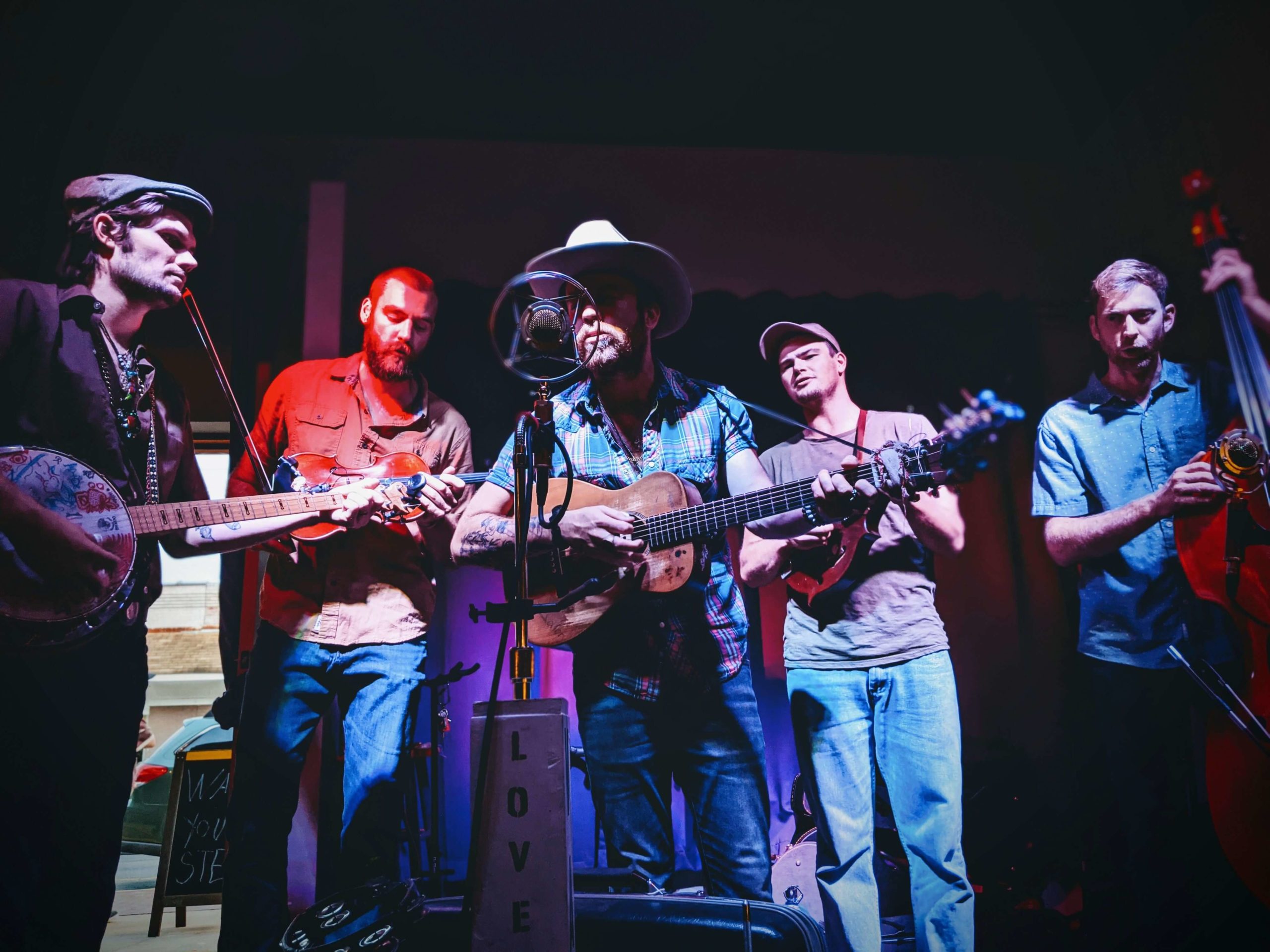 Shows at Yonder Southern Cocktails & Brew include open-mic nights, jazz, and an ever-changing lineup of local and traveling bands. photograph by Eryk Pruitt

Merritt’s Grill: Merritt’s legendary B.L.T. draws crowds daily — and has earned accolades from National Geographic Traveler, Every Day with Rachael Ray, and more. The gas station-turned-grill has been serving single, double, or triple B.L.T.s (along with fried bologna, pimento cheese, and tomato sandwiches) since 1992, and has become a Chapel Hill institution — but the sandwiches aren’t the sole reason to grab a table.

Merritt’s Grill also dishes up live music. Bands often perform in the parking lot and play string music in the corner of the restaurant and country store (an event known as Banjos and B.L.T.’s).  Can you think of a better pairing? 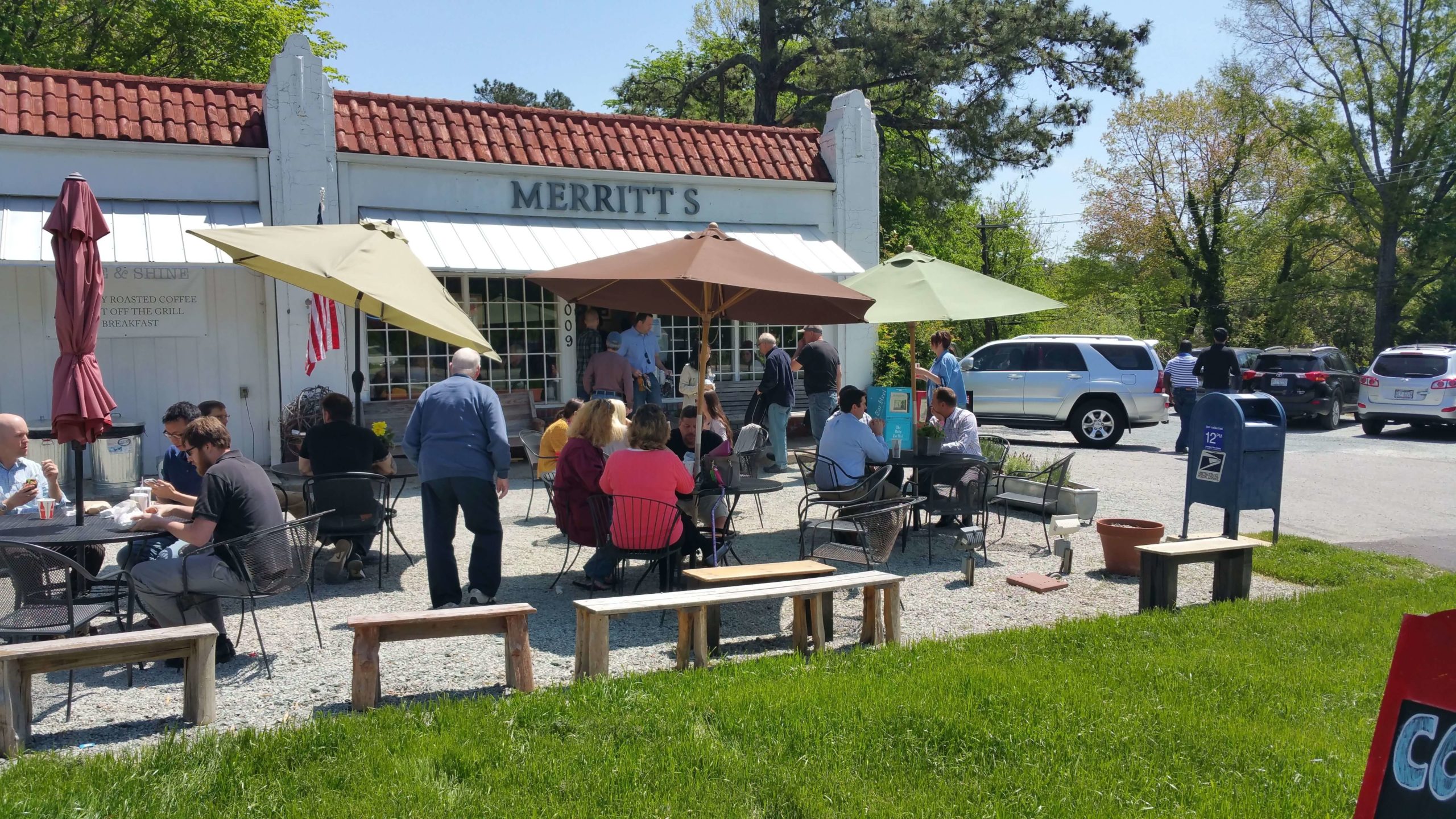 Colonial Inn: This luxe inn in the heart of historic Hillsborough welcomes guests to spend the night or dine in the restaurant, where baked brie, pan seared salmon, and chicken pot pie are on menu. And, starting this summer, to relax on the picturesque grounds and enjoy Concerts at the Colonial.

“It gives community members an opportunity to come to the inn and have a wonderful experience [while] supporting our local businesses and the unique culture that is Hillsborough,” says Elise Tyler, the inn’s co-owner and general manager.It’s also a chance to listen to live bluegrass and folk music and sip craft cocktails on the grounds of the historic inn, which underwent a multi-year renovation before reopening in 2020. The free concerts are held from 5 to 8 p.m. Sunday through Thursday. 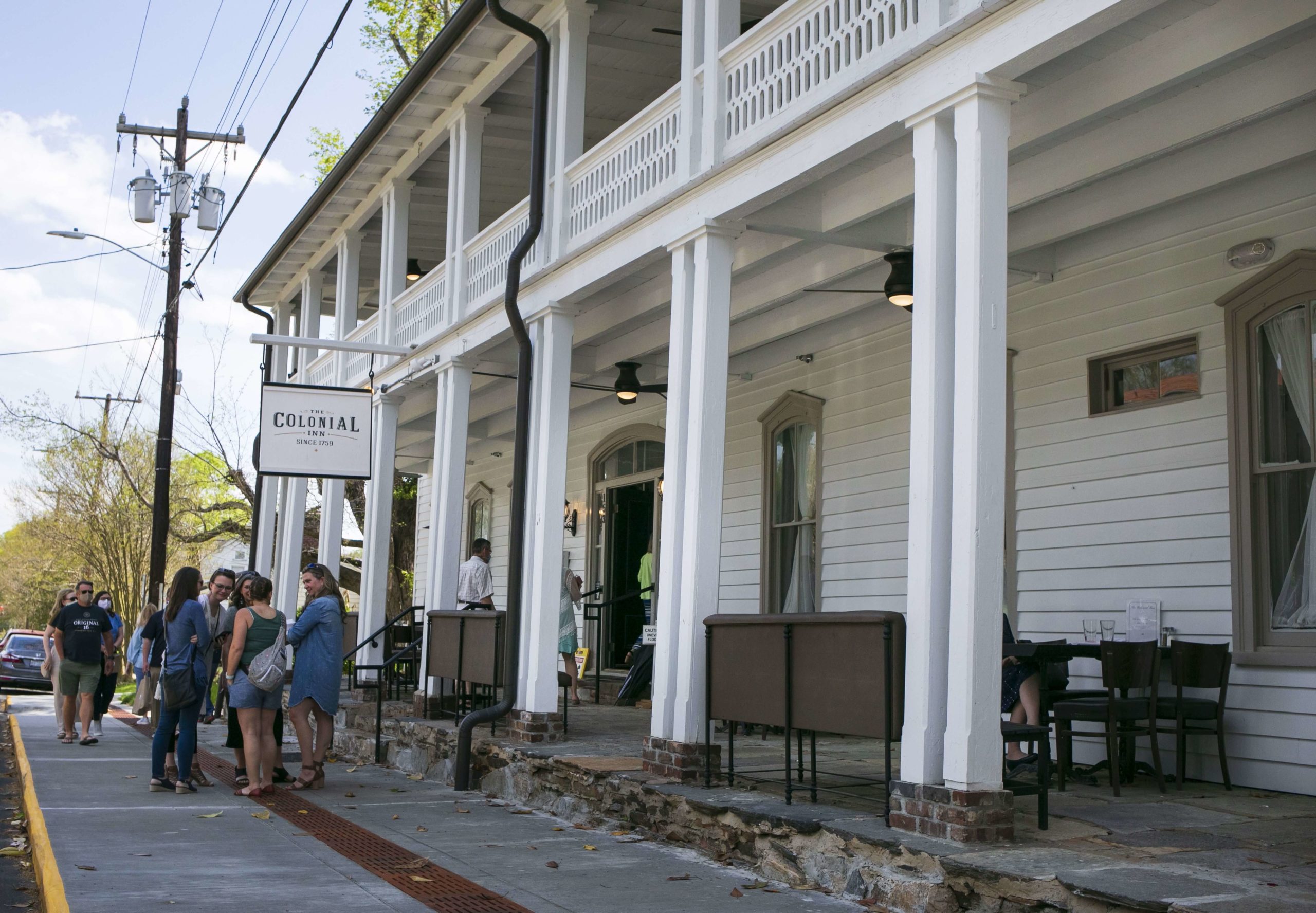 Over the summer, relax on the picturesque grounds of the Colonial Inn and enjoy Concerts at the Colonial. photograph by SP Murray

Steel String Brewery: Sunday afternoons are reserved for live music at this Carrboro brewery — and thanks to its name, you shouldn’t be surprised to discover that the taproom has a history of hosting folk, bluegrass, and jazz musicians.

The music series was halted during the pandemic, but Knight hopes to reintroduce it soon. In the meantime, he suggests stopping in for a Big Mon IPA, Dad Fuel Lager, or one of the new American brews made with ingredients from the brewery’s own farm before catching a show at Cat’s Cradle down the street.

“Our location makes for a great pre-show get together with friends,” Knight says. “There are so many talented local musicians that we can’t wait to have back on our stage.”