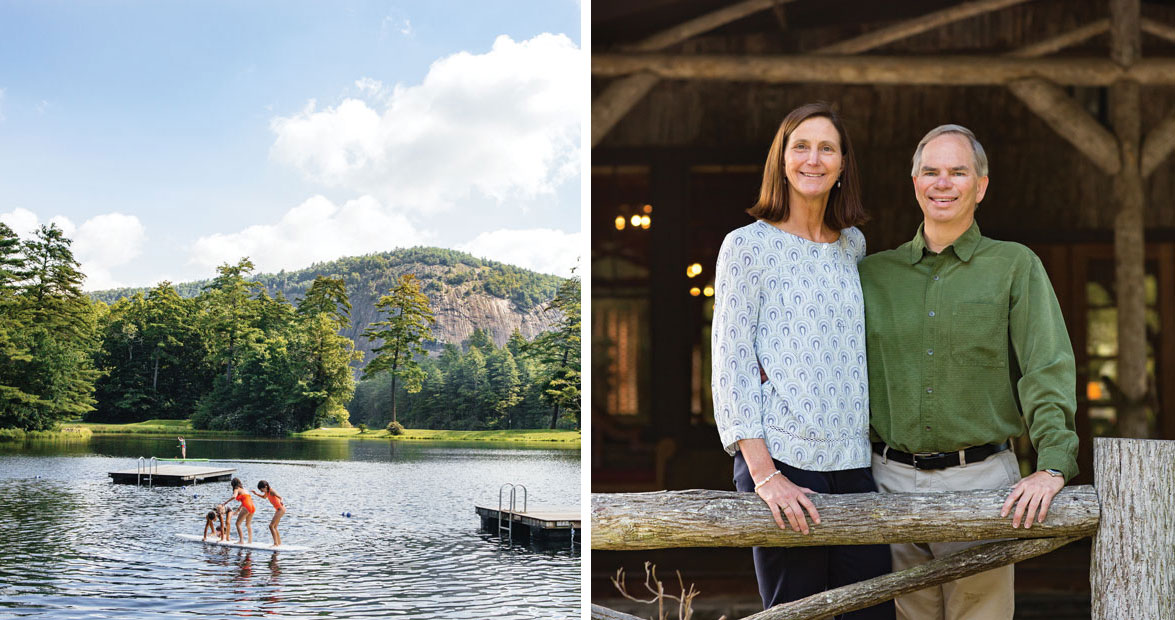 Between bites, Will McKee Jr. speaks to nearly everyone who passes his table in the dining room at High Hampton Resort. Guests may be staying at this bark-shingled treasure of a lodge outside Cashiers for just a week or two, but they and their families — often generations of the same family — will return and return, like swallows to Capistrano. And Will McKee Jr. has always been there.

High Hampton is McKee’s home, and his family’s legacy. Until his 20s, he lived in the sawmill cottage, where all the inn’s furniture was made. He played in the smokehouse, where the inn’s hams were cured. Framed pictures of him as a child, his parents and grandparents, and guests — at Sunday night sing-alongs, talent shows, donkey-cart races — line the inn’s walls. He met his wife, Becky, when she had a summer job as a waitress in this wood-floored dining room with simple country chairs, white tablecloths, and Mason jars filled with blossoms that flutter when a breeze wafts through the screened windows. With its evening dress code, High Hampton’s dining room — where buffets feature everything from salmon to pickled okra, panna cotta to Jell-O — may be the inn’s most iconic feature. Unless you count McKee himself.

In 1922, McKee’s grandfather E. Lyndon McKee bought High Hampton from the estate of Dr. William Halsted of South Carolina, and opened the inn. (The property was already named after Halsted’s wife, a niece of Civil War Gen. Wade Hampton III.) The third-generation owner is soft-spoken, with the seeming soul of a poet. He might well have written the slightly cryptic paragraph inside one brochure filled with descriptions of the inn’s activities and amenities: High Hampton is not for everyone … Not everyone likes it here … Commercialism is not part of the scenery. 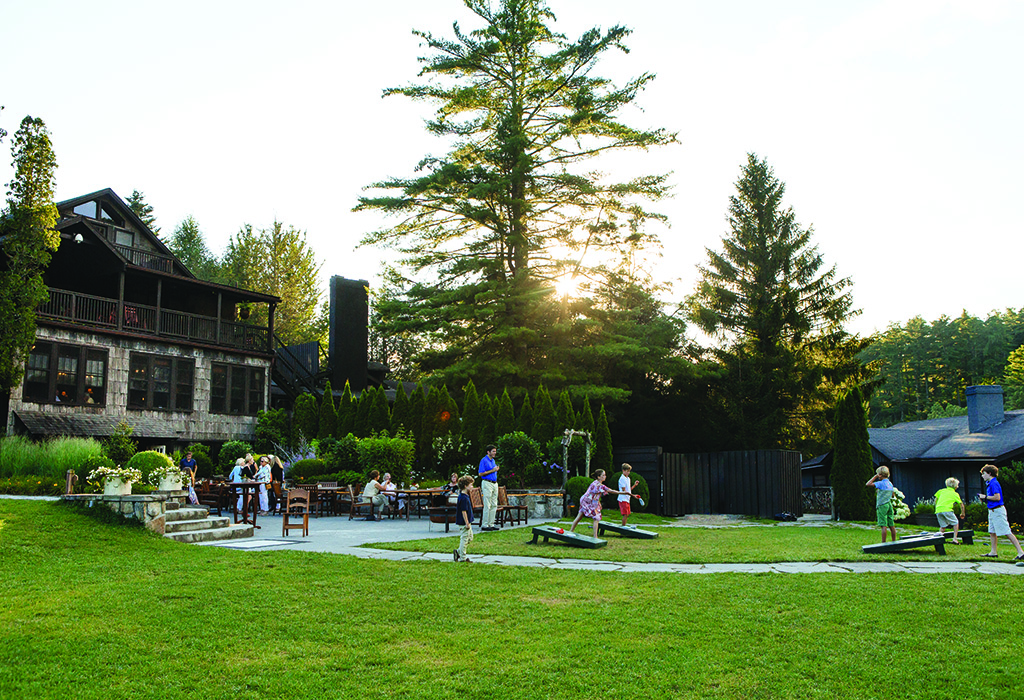 Evening games on the Lawn, meals in the Dining Room: Everything is meant to be shared with family at High Hampton. photograph by Tim Robison

“The scenery” encompasses 1,400 acres, including a golf course, tennis courts, stables, and 31 rooms in the lodge, which is on the National Register of Historic Places, plus 18 cottages arranged around a 35-acre lake beneath Chimney Top and Rock mountains. For 95 years, guests have sought relief from the summer heat at High Hampton. But they also come for what McKee calls “the spirit of High Hampton,” an unfussy yet civilized appeal, where an Oriental rug looks right at home with a Ping-Pong table outside on one of the wide wraparound porches.

Some 22 sofas are scattered around the lodge’s lobby, with its commanding, four-sided fireplace built of stone. Even in July, a fire is lit every morning. Hikers can pick up boxed lunches from a sideboard, but a stack of crossword puzzles is also available, as if to say, If this is all you accomplish today, you’ve done enough. Skittles boards stand at the ready; backgammon and checker boards are permanently painted on tables. Crustless egg salad or pimento cheese sandwiches appear daily at teatime. Guests sprawl in chairs or rest their feet on the porches’ rock walls, pursuing solitary enterprises with a sketchpad or a book, or, yes, a computer. A Westie yips from his leash, for High Hampton welcomes dogs.

“The spirit of High Hampton” — a rustic, unrushed bliss — is evident even in the resort’s place names, pared down to basics: The Boat House. The Market, where you can grab an energy bar, a bottle of water, a sandwich. The Pavilion, for bridge games and bashes with bands. The Lawn, with Adirondack chairs, has been the site of many a wedding, and on Thursdays, hosts a dozen llamas with coats like French poodles, enchanting youngsters and adults alike. And every evening at dusk, while the gray granite face of Rock Mountain blushes rose in the sinking sun, The Lawn is peopled with couples drifting toward The Tavern, where a piano player tinkles out “Fascinating Rhythm.”

McKee waves at a guest, then says of her, “She’s a member of Augusta National but would rather be here.” Here, where she can hit a golf ball toward a buoy-lined square on the lake for a $50 hole-in-water challenge on Friday nights. Here, where folks paddle the lake in canoes or on stand-up paddleboards, and toddlers splash in a baby pool delineated by cinder blocks. 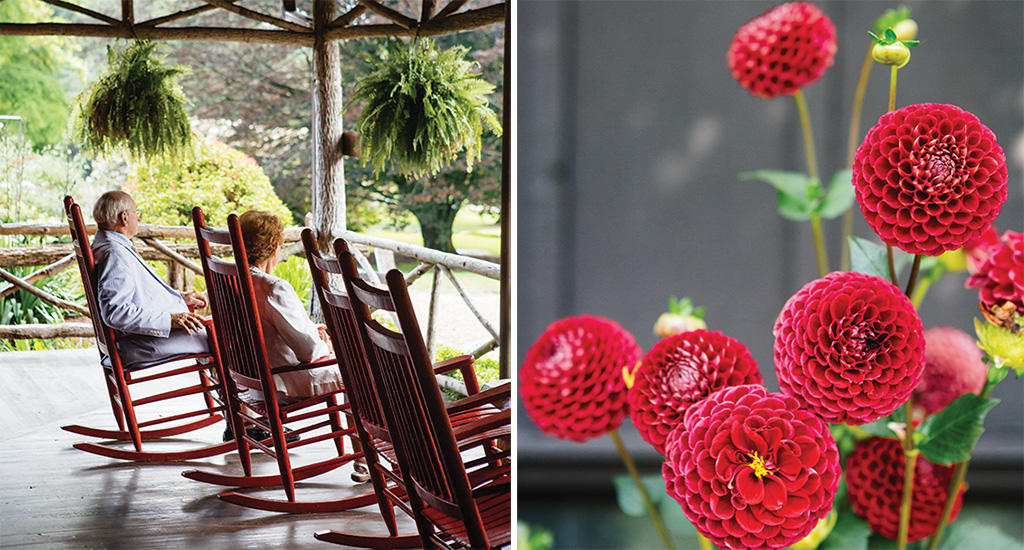 Rocking chairs on the wraparound porch aren’t just for decoration, unlike the acre of dahlias that were planted at the estate more than 100 years ago — before the resort was even an inn. photograph by Tim Robison

McKee is so assured of the enduring essence of High Hampton that in July of 2017, he passed the torch to Daniel Communities, a nationally known developer and manager of premier destination resort communities. McKee is ready to pursue other areas of enrichment, to give back in ways that the full-time job of running an inn hasn’t permitted. He’s pleased and confident about the segue from family to corporate proprietorship; and despite his serene mien, he is a realist.

The dinnertime dress code, for example, and the sign proclaiming, No denim, no ball caps, no cell phones? As if on cue, a 6-year-old in a sweet summery dress, playing tag with her blazer-clad  dad before supper, sings out, “Missed me, missed me, now you gotta kiss me!” McKee admits that he’s been struggling with the dress code concept for years, realizing that it’s “an homage to my father. A coat and tie made my father’s generation comfortable, but I myself don’t want to wear a coat and tie when I go to a restaurant.”

McKee understands that, in many ways, High Hampton represents “the last of the Mohicans.” But, he says, “things that are held on to here, the new owners embrace.” That includes the resident donkeys, Ed and Fred, whom children feed with apples provided at the kitchen, as well as “Dinner in the Dahlias,” an annual outdoor fete held among hundreds of dahlias. “There will be a continuum of what has been invaluable,” he says, including the spectacular view of Chimney Top and Rock mountains, which, after his father’s death in 2004, McKee protected for future generations with conservation easements.

Tom E. Garcia, the general manager of High Hampton Resort, as it’s now known, agrees. He’s not worried about the addition of televisions and telephones in guest rooms. “A TV doesn’t create a memory,” he says. “What will create memories is what we’re putting together.” Like a “wine walk-around” with a horticulturist to explain the significance of the property’s magnificent champion trees. Outdoor music events before dinner. A “Sweet Tea and Firefly” night, complete with Mason jars, when grandparents can watch their grandchildren do what they themselves once did at twilight. Fire pits, where families gather to tell stories about their day. The “new” High Hampton wants to create more experiential elements, while keeping old favorites. “We understand traditions — and making new ones,” Garcia says.

“High Hampton is a jewel,” he continues. A jewel that Will McKee has entrusted to new faces, with high hopes that its legacy and traditions will live on.