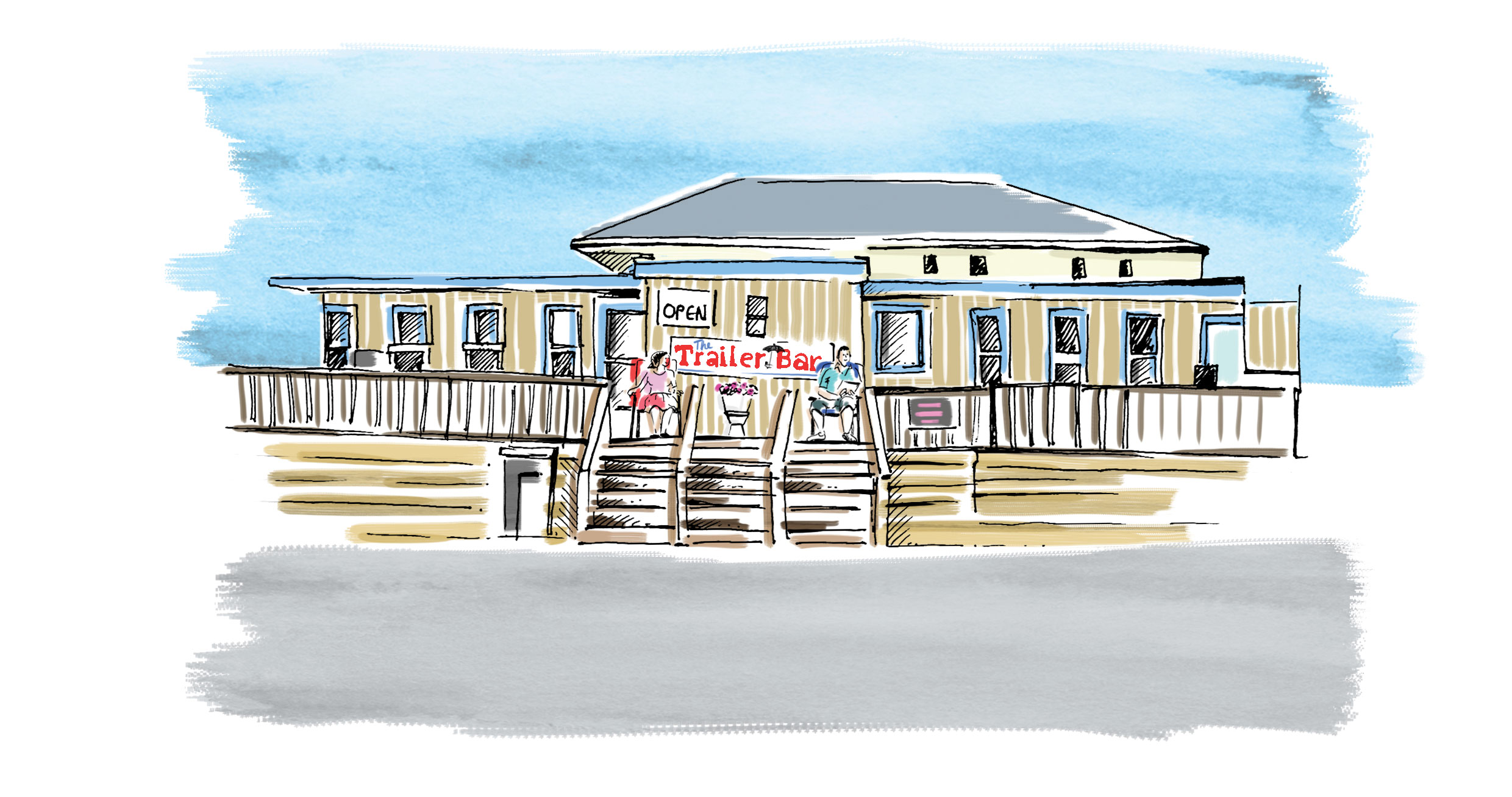 Nothing about Surf City’s Trailer Bar is quite what it appears to be. First, the Trailer Bar is not now, and never has been, a trailer. At no time did it ever have wheels on it. And the old white porcelain toilet out front? Get your mind out of the sewer — it’s an ashtray in summer and a planter for holiday floral displays from Halloween through Easter. The arrangements are created by the Trailer Bar’s bookkeeper, Susan Billet, who taught middle and high school for 25 years in Onslow County. As for the brightly monogrammed Trailer Trash pickup parked in the lot — well, how do you haul your recyclables?

Like any bar worth its salt, the Trailer Bar has a complicated past, which includes former lives as a bar and grill and a Putt-Putt course, and “before that, it was a field,” says one of its longtime customers, a tall, friendly, gray-haired man known simply as “Bubbie.” (Yes, he confirms, the Yiddish term of endearment — just like my Jewish grandmothers in Chicago used to say.) The building is wood-frame, stick-built, with wooden pilings and girders underneath. “And ghosts,” Bubbie adds. “Late at night it’s hard to tell the difference between a ghost and a drunk.” When owner Tony Trevathan bought and cleaned up the place in 2009, it was officially named Castaway’s Bar and Grill, but even then nobody ever called it that. Everybody — surfers, bikers, retirees, islanders, and tourists — has always called it like they see it: the Trailer Bar.

Bar manager Andy Redmond jokes that the building, already showing its age after a decade of life at the beach, is “held together by termites holding hands.” Inside the narrow, standard single-wide space (14 by 65 feet, maximum capacity 70 occupants, says the fire marshal’s sign; the deck accommodates another 200 or so), the pool table, jukebox, ATM, and a few tiny tables compete for space. The faded, ’80s-style wood-paneled walls are almost entirely covered with stickers; signs (Redneck Yacht Club, Beware of Attack Bartender, Beer — Helping White Guys Dance Since 1863); and advertisements for booze, bands, local surf shops, and taxi companies. Chalkboards and whiteboards list upcoming live music events and drink specials. There are also framed and unframed photographs of Trailer Bar clientele, staff, and family; a formal certificate from the local VFW honoring the Trailer Bar’s sponsorship of their 2014 Fall Open golf tournament; a large glass-fronted showcase display of Trailer Bar souvenirs for sale; an array of authentic police and fire department shoulder patches contributed by customers from various cities and states; and a nail on which hangs the Trailer Bar’s homemade, brightly painted shot-ski. That, for the uninitiated, is a long, skinny board outfitted with slots for four shot glasses, allowing a group of drinkers to down their shots simultaneously and with fanfare, a ritual far more dramatic and celebratory than everyone just lifting their individual glasses while someone yells, “One, two, three!” 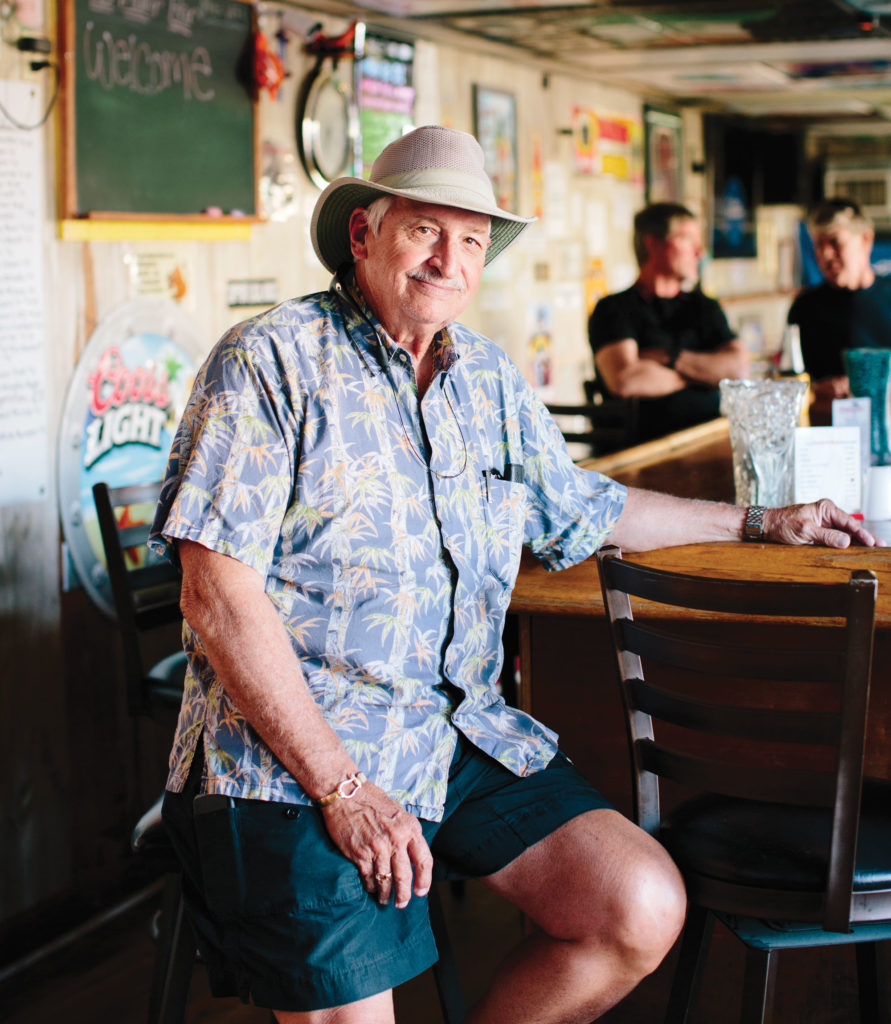 When Tony Trevathan bought this place in 2009, he changed the name to what everyone was already calling it: the Trailer Bar. photograph by Millie Holloman Photography

Making the space feel even more crowded and colorful are the acoustic ceiling tiles, each one painted to honor friends, neighbors, and fellow businesses. The bold, beachy images and messages are individually designed and sponsored, with proceeds split between the artist and the local community organization Neighbors Helping Neighbors. If you want your name, face, or business featured on a tile, sorry, it’s too late — they’re all painted already, every last one, although bartender Kathy, a k a “Mama K,” tells me that there’s still so much demand they could tile another whole bar.

The bar’s cluttered, scruffy, patchwork decor and jokey, self-deprecating vibe belie its respectable standing in the Surf City and Topsail Island communities. It’s considered a warm and welcoming gathering place for friends and strangers alike, a good citizen in the business community, and an enthusiastic supporter of various charities and service organizations.

Also unexpected: the Trailer Bar’s extensive wine list, the work of Redmond, who brought his 30 years of experience in the wine and beer distribution industry to the table (and trailer). So you might just find yourself sipping your glass of Sonoma-Cutrer Chardonnay beside someone downing a Kamikaze or Pay Day shot. You might, in fact, be married to that person.

Though Redmond calls himself “the guy behind the scenes,” he’s proud of his wine list, and of the quality of the musical talent hosted at the Trailer Bar — local, regional, and even national acts that perform on the deck almost every night during high beach season. There’s never a cover charge, either. For the bar’s state-mandated membership fee, which is one dollar per year, you can see Felix and the Hurricanes, classic blues rockers from Altoona, Pennsylvania; acoustic guitarist Chris Bellamy; and Fryd on the Boat, featuring the guitar and vocal stylings of Ernie McAlister, former mayor of Cary — just to name a few.

You must be 21, of course, to set foot on the Trailer Bar’s outside deck or to enter the bar. The age demographic of the bar’s usual crowd, Redmond estimates, is 22 to 85. There is Trailer Bar swag for every member of the family, including T-shirts, hoodies, beach towels, bottle koozies, shot glasses, and infant-wear onesies, which some people purchase for their dogs. “They cut the snapped bottom part off,” a bartender tells me, “and send us photos.” 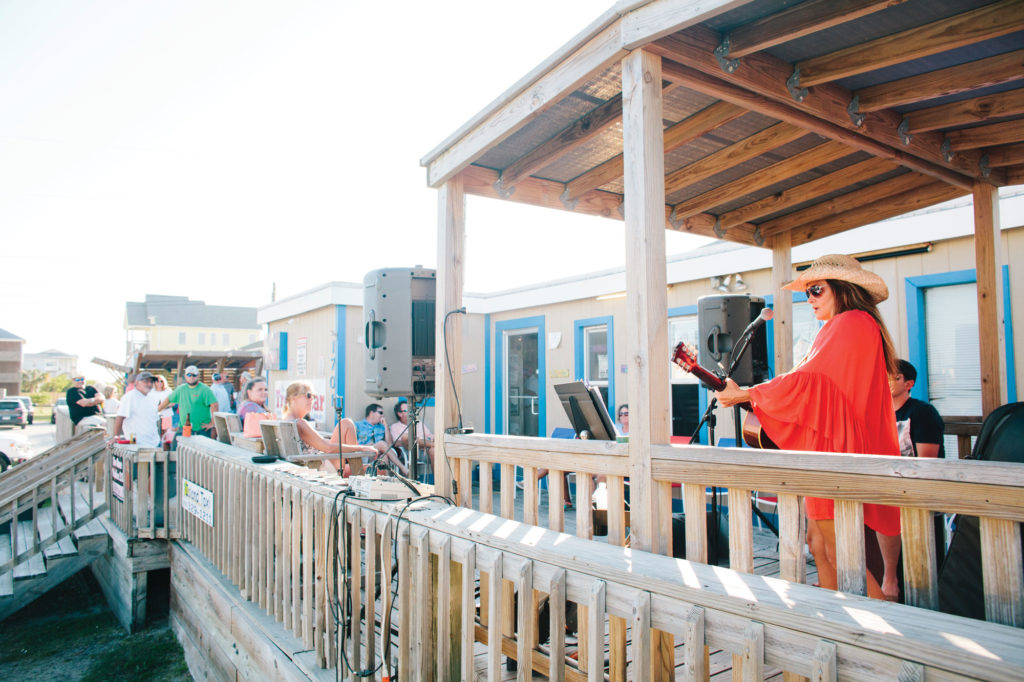 The word “family” comes up again and again in conversation with Trailer Bar bartenders, customers, and managers. Besides landscaping the toilet and cutting paychecks, Billet, nicknamed “Little Bird,” hosts and cooks for holiday potlucks, birthday parties, wedding receptions, baby showers, and memorials — all of which have been held at the Trailer Bar. Billet also serves as “ultimate den mother,” says Ginger (who also answers to “Cheers” and “Gingerlicious”), one of the half-dozen or so full-time bartenders, almost all of whom have been on board since the bar’s inception, and all of whom describe owner Trevathan using fatherly terms, words like “generous,” “compassionate,” “forgiving,” “understanding.” Everyone has a nickname, and everyone seems to have known each other for decades. Trevathan and Redmond were next-door neighbors for 20 years. But no worries if you’re a newbie, or a traveler far from home — the Trailer Bar staff has got your back. “Leave your drama in the car” is one of the bar’s many unposted mottoes.

In the early 1990s, I fell in love with a dive bar in Gainesville, Florida, called the Cypress Lounge, claimed by its regulars to be the oldest bar in town (37 years old, which sounded ancient to me at the time). My writing professor, a famous Southern author of the macho, hard-drinking, rabble-rousing variety, recommended the place — “great material,” he said — but grew a little nervous and concerned when I kept going back, suggesting that I was “slumming.” But he was wrong; I sincerely loved the Cypress and the family of fellow misfits I met there. I celebrated one Christmas with the head bartender and her husband at their mobile home, way out in the wilds of north Florida, and attended the wedding of another bartender, whose groom was a Cypress regular who resembled the country singer Alan Jackson. “Slumming” implied that on other nights, normal nights, I hung out at fancy upper-crust bars, or at least respectable middle-class bars, whatever those are. But I didn’t. At the Cypress I could be anonymous or recognized, my choice. I could go alone and just listen: to stories, news, jokes, woes, arguments, and toasts. Though I was single, a young woman sitting alone, no man ever harassed me at the Cypress — probably because one of the barmaids would’ve kicked his butt out the door. A fictional version of the Cypress appeared in my first book; my second book was dedicated to the memory of a Vietnam veteran I’d met there.

So when Bubbie says of the Trailer Bar, “The staff is the best here,” I know he is saying something much larger, something more important and harder to say. But then he continues, “And I go to all the places … and I go to church,” leaving me to ponder the origin of his Yiddish nickname, and nicknames in general, just one of the million tiny ways we humans connect, like termites holding hands, and hold our scruffy, beautiful world together.