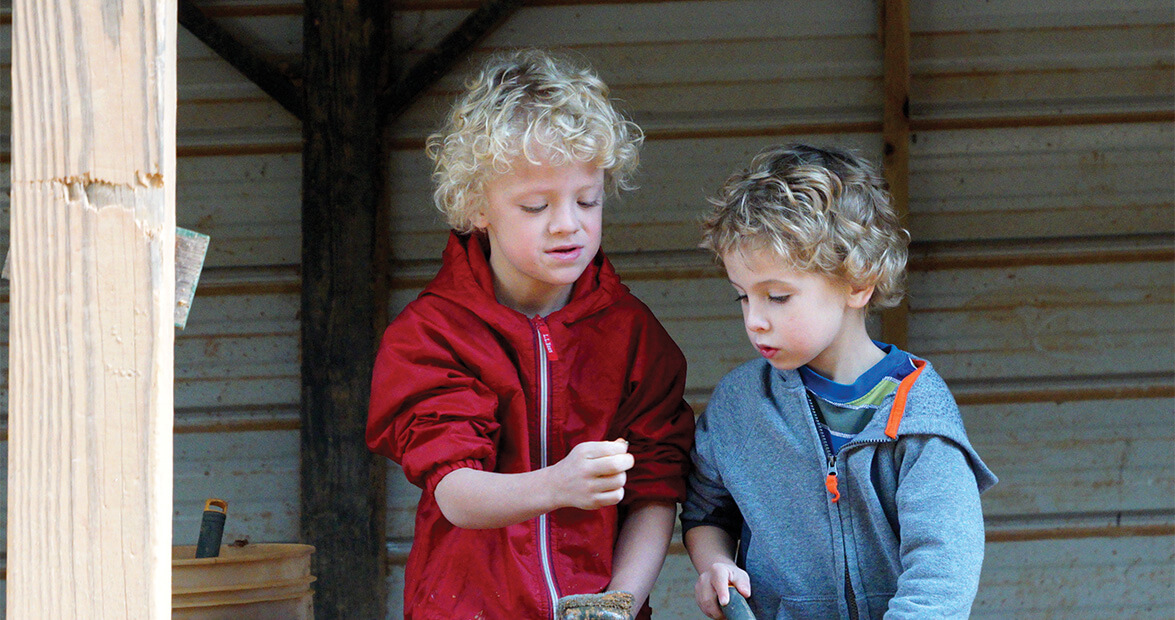 “I know what we should do,” The Wee says. He’s in pre-K these days, and given to announcements. “We should bring an ax with us and hammer down lots of rocks. Good idea, right?”

The Toad, my 7-year-old, says, “We should bring home clay and microwave it and put it in the shape of a bone — you know, like microwave it up — so the dog can look at it and feel safe. Also, do you think we’ll be rich?”

The Wee digs in the closet for his shoes. “Except I’m worried now,” he says. “Because I lost my worry rock.”

They both stop, look at me: Could such a thing be possible? “I don’t know,” I tell them, and it’s true: I’ve never been gem mining before, either.

What little I do know of all this is what I’ve seen on roadsides: big red letters spelling out RUBIES on white boards, sideline operations selling soft-serve ice cream, maybe a gift shop. Emerald Hollow Mine in Hiddenite, however, seems the realest of real deals: no loud signage, a fine coat of red clay on every surface, mining permits required for everybody older than 3.

I ask Taj Wright, who says working at the mine is his dream job — he’s been a rock hound since he was 2 — what the best bet is for boys of boundless energy, yet limited attention spans. “Well,” he says, “a five-gallon bucket filled at the creek or the mine can weigh as much as 100 pounds.” He looks down at them and they stare back, wide-eyed. “We sell buckets right here at the sluice, though.”

“How does that work?” The Toad asks.

Wright grins. “Let’s get you guys set up, and I’ll show you.”

We purchase something called a “Super Bucket,” which is enriched, meaning the kids are guaranteed to find things. And find things we do: The boys scoop hunks of damp clay into wire trays, shake the trays in the chilly sluice water, and, nearly every time, shiny somethings remain once the clay washes away. “What is it?” The Wee asks me, holding up a nickel-size black rock. “What did I find?”

Bailey Watt, whom the rest of the staff calls The Geologist, wanders down the line. “That’s tourmaline,” she says.

“Is it valuable?” he asks her. My 4-year-old: Captain Vocabulary.

“Do you like it?” she asks. He nods gravely. She smiles. “Then it’s valuable.”

Watt will later appear in front of the kids with tiny emeralds and flecks of topaz, saying, “When there are kids here, I bring them the good stuff.” That’s Junior Ducharme’s basic bearing, too, once we reach the bottom of the bucket and take our stones to a picnic table to sort out what we’ve found. He has the kids play rock, paper, scissors to determine who gets to go first, and then he lines up the largest stones, naming them: aventurine, mica, pink rhodolite, blue sapphire. “That’s a huge emerald,” he says of one of The Toad’s finds. “And those are some nice big garnets,” he says, polishing the gems with his thumb, and placing them gently in The Wee’s hand.

North Carolina’s in the perfect spot, Ducharme tells me, while the kids begin rock-mining in the gravel of the parking lot: Heat and pressure, he says, formed the gemstones, and erosion always brings something new to the surface. Metaphors abound at the emerald mine. My boys, who think they might be rich, start making plans to use their gems as currency at a big-box retailer of various consumer goods. The adults smile, laugh a little, but they’re no different: We’re prospectors here, all of us. Filled with hope. There might be gold in them thar hills — or emeralds. And here come both boys now, rocks in their hands, wanting to know: What is it? What did I find? “I don’t know,” I tell them. “But let’s go see.”