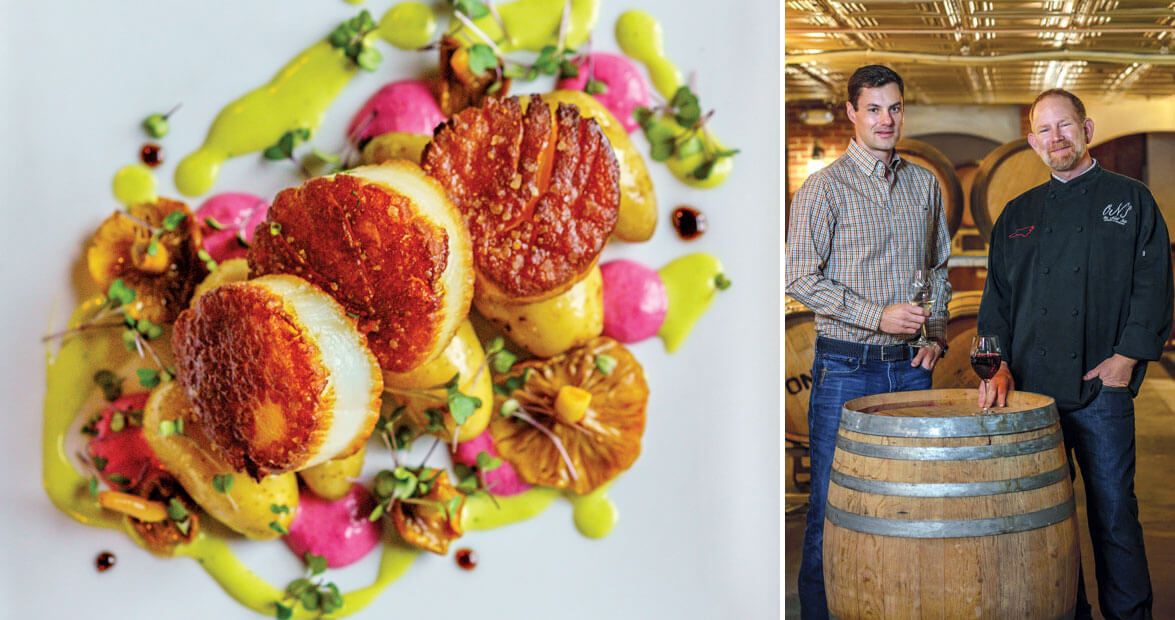 You’d never know from his calm, Mount Airy drawl, but Ben Webb is a busy guy. There’s the 25 acres of vineyards; the 12,000 to 15,000 cases of wine that his Old North State Winery produces annually; the Fish Hippie apparel business that he and a partner own; his two daughters — both under age 7 — with wife Ellie; and, inside the winery, a restaurant where the food is not an afterthought, but a worthy companion to the wine.

From 11 a.m. through evening, locals, Mayberry enthusiasts, fishermen casting on the Ararat River, Pilot Mountain adventurers, and oenophiles drop in to ONS for its changing menus. For the lunch crowd: flatbreads (like shrimp with bacon and spinach), salads, and wraps featuring local products, like the Laurel Heights Farm braised beef brisket sandwich. Dinner might be vegetarian risotto or pork belly ramen with “noodles, a Kai’s Hens egg, almonds, cilantro, vegetables, and broth of bones.”

In this long, Main Street stretch of a building, constructed in 1890 as a hardware store, the actual winery operates beneath your feet on original hardwood floors: two levels comprising the dimly lit barrel room, the gleaming silver vats, the grape-crushing machinery. You can’t separate ONS’s winery from its restaurant, but you can sure as heck separate this winery’s food from the oyster crackers or cubes of Cheddar on offer elsewhere. 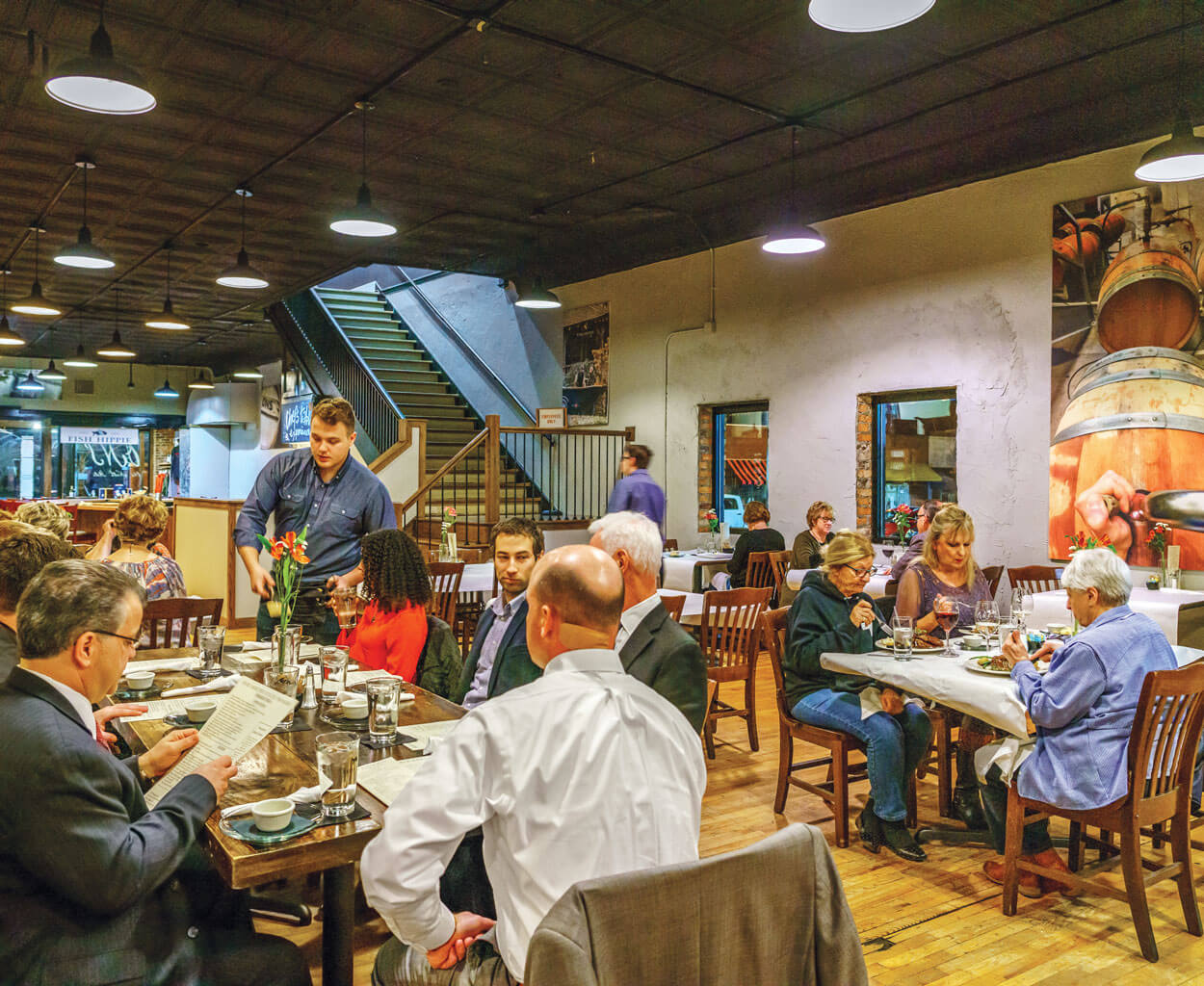 Old North State Winery is as much a place for casual meals as it is for special occasions. photograph by Jay Sinclair

ONS first opened a walk-up deli in 2015; when the deli evolved into a restaurant in 2017, the casual atmosphere remained. Ben wanted an eatery where “you can wear anything to taste wine and dine on upscale food — an approachable restaurant to accommodate a business lunch or grabbing dinner with kids.”

Adults, though, may hesitate before plates so beautiful, so interesting, that it feels almost disrespectful to disturb them. A slice of country pâté made with Yadkin Valley pork and Darcy Farms bacon, marinated in Grand Marnier and aromatics, served with Lusty Monk mustard from Asheville. Yellowfin tuna from the Outer Banks with a slaw of cabbage, pickled ginger, and roasted peppers. Seared salmon atop chestnut mushrooms from Borrowed Land Farm down the road in Pinnacle. All encircled by colorful emulsions — saffron and herb — and a red wine reduction.

Chef Chris Wishart’s gorgeous treats play a starring role at the “experience” bar, where, on Thursdays, the ONS sommelier pairs them with four international wines as part of the restaurant’s Tasting Club. On weekends, by reservation, ONS offers a Chef’s Table, where Chris can really strut his culinary creativity, right in front of the guests, explaining as he prepares dishes to pair with eight wines.

The plates are so beautiful that it feels almost disrespectful to disturb them.

Before Chris came to lead the ONS kitchen, he trained in restaurants in Greensboro and Richmond, Virginia, and had his own restaurant across the street. “When you’re crushing grapes,” Ben says, “the process goes on late into the night. Chris watched, ambled over, we shared a glass, and became friends.” Pretty soon, Chris found himself at the expanding ONS restaurant as executive chef. “I trust Chris absolutely,” Ben says.

The next venture for ONS: a curbside component. Why not offer customers blackened fish tacos or Chris’s best-selling soup to go, without ever taking their foot off the brake pedal? Just another way that ONS serves the locals, the sidewalk-strollers, and the greenway devotees.

Wine tasting is all well and good, and ONS delivers on that promise. But sometimes you want a burger with your Cab, or a pretty platter of gastronomical goodies. Inside a working winery, within a historic building, on a small-town main street, sippers, hipsters, and full-on foodies discover that the magic isn’t only downstairs in the grapes — it’s upstairs, on the plate.