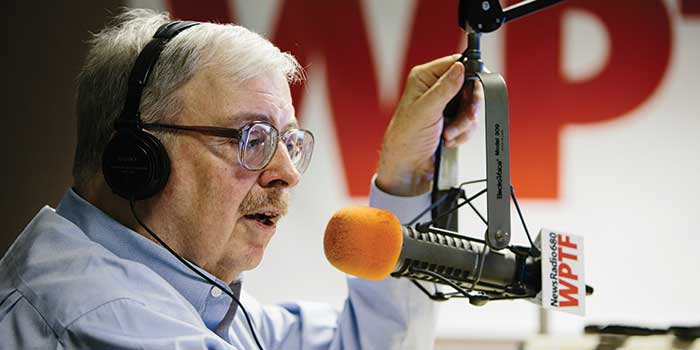 Drive after sunset on any rural road in eastern North Carolina, and you can pick up AM radio stations as far away as St. Louis, Chicago, and New Orleans. These days, much of the programming is syndicated and full of political vitriol, left and right. But if you land on AM 680 between the hours of 9 and 10 on a weeknight, the voice you’ll hear is close, measured, and soothing. Raleigh radio veteran Tom Kearney can spin a story on any topic, and before you know it, the hour is over and you’ve learned something new.

Kearney started a part-time job at Raleigh’s flagship station, WPTF, in 1982. He went full-time with his call-in show the day after Christmas in 1988, and he still remembers the subject. “We talked for two hours about Christmas decorations,” he says.

Since then, he’s built up a loyal audience of regular listeners. He’s done shows dedicated to drive-in restaurants, candy bars, old movies, and those long-gone service stations where an attendant pumped the gas and washed your windshield.

But Kearney traffics in more than nostalgia. His regular guests include an economist, a pharmacist, a stamp-and-coin expert, and the director of the North Carolina Center for Public Policy Research. When the talk occasionally veers into the controversial and a caller oversteps the boundary of civility, Kearney loads on his trademark sweetness: “Thank you for your thoughts, and I believe you’ve had an adequate chance to express them,” he’ll say. “Now let’s hear from some others who may want to get in on the conversation.”

On a recent night, Kearney arrives 30 minutes ahead of airtime and ambles into the studio with his guest in tow. He points her toward a seat at a table outfitted with microphones. Kearney settles into his swivel chair and throws a set of headphones around his neck, all the while talking non-stop in his eastern North Carolina drawl, distracting his guest from the realization that she is seconds away from going live around the world. In addition to broadcasting up and down the East Coast, the show will stream on the Internet.

The producer gives the cue, and Kearney leans into the microphone: “Welcome to ‘The Tom Kearney Show.’ Tonight our guest is Nancy Olson, longtime proprietor of Quail Ridge Books in Raleigh.” Kearney explains that this is the last day before Olson, who is retiring, turns over the store to its new owner.

“Nancy,” he says, “this is your show. I’m just the radio guy. Think of me as your Ed McMahon. Tell us what you’ve been reading, and before we’re done, I have several books to throw in myself.”

The hour flies by. Olson laughs and tears up as callers congratulate and thank her for years of nurturing authors and promoting good books. Then, just as seamlessly as it began, another show in Kearney’s 31-year logbook is done. He makes it easy, which is why so many guests come back.

After graduating from Wake Forest University, Kearney originally aimed for academe, completing graduate coursework at UNC-Chapel Hill, but he stopped just short of finishing his history dissertation. He taught part-time at N.C. State through most of the 1970s before a friend mentioned WPTF needed an engineer/producer to fill in on weekends. The prospect was irresistible to the young man who’d grown up in Goldsboro listening to Carl Goerch, the founder of Our State and host of “Doings of the Legislature” and “Carolina Chats,” both on WPTF.

As a child, Kearney built Tinker Toy microphones and played radio. For his 6th birthday, the only present he wanted was to be allowed to turn on the family radio all by himself. His first taste of broadcasting came when he earned an amateur radio license and began tapping out messages in Morse code to distant strangers. Today, the Internet has made shortwave radio all but obsolete, but Kearney still covers the topic once a year on his show.

Kearney turns 70 this month and could retire, but he loves his evening forays too much. Like his role model, Carl Goerch, he’s come to think of himself as a “professional” North Carolinian.

“The goal has been to stand out amid all that rancor and palaver on the airwaves,” he says. “I have tried to do something different.”

The Tom Kearney Show
WPTF 680 AM

Georgann Eubanks has been a guest on “The Tom Kearney Show” three times (so far). She is the author of three books in the Literary Trails of North Carolina series and the host of “North Carolina Literary People,” a series of book talks at UNC-Chapel Hill. Her most recent story for Our State was “Women Writers of Hayti” (September 2010).