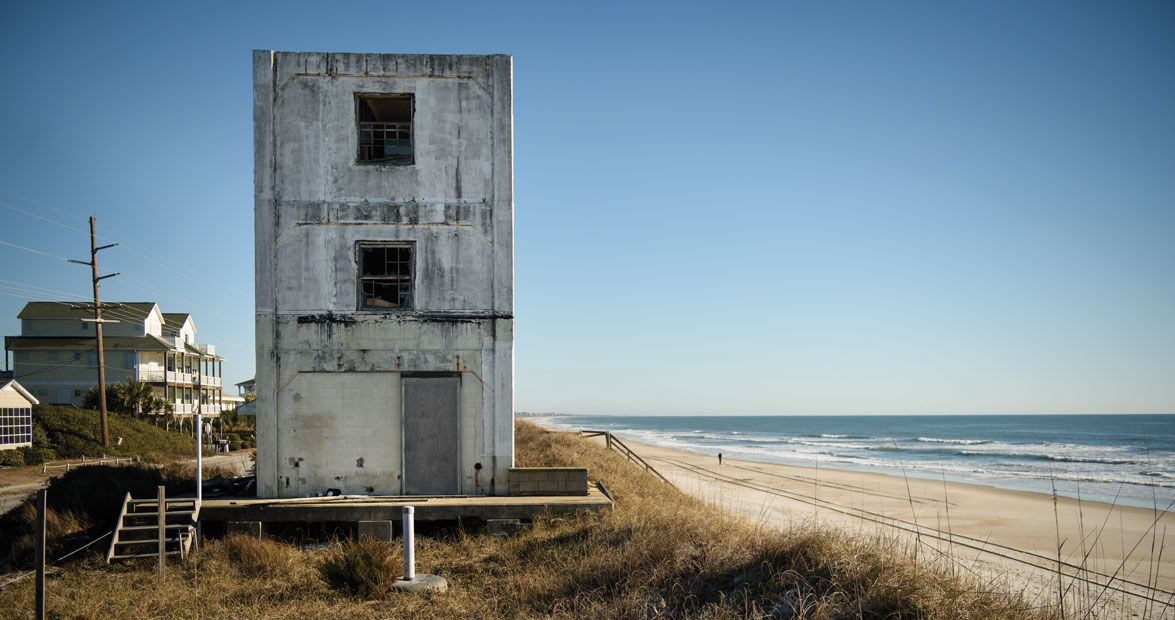 The tower and the vacation home next to it in Surf City are at odds with one another. The tower’s concrete exterior is cold and unappealing, a stark contrast to the pastels preferred by homebuilders here. Inside the house, a contemporary look reigns, the opposite of the spartan accommodations of the tower when it was constructed in the 1940s. Sliding glass doors and patios overlooking the Atlantic have been cut into the thick concrete walls. A small penthouse, topping out at 47½ feet above the sand, offers the best views on Topsail Island. The tower wears it like a hat. This is a vacation destination wrapped in a history lesson, a fact not lost on Ken Richardson, who bought this thing, Tower Five, in 1995. “I love the whole idea that these towers were built to develop the guided missile,” he says. On this barrier island, where so many people now come to get away, Tower Five is just one reminder that this place was once purposely remote.

Tower Five is one of eight towers — some repurposed as beach houses — that were part of a top-secret research program in the 1940s that ushered in the age of supersonic flight. That program, Operation Bumblebee, was a joint operation between the Navy and Johns Hopkins University to test the ramjet engine, the precursor to the modern jet engine. It began in early 1945 in New Jersey, but researchers needed a more isolated area to measure the ramjet’s flight path.

Enter Topsail Island. “It was deserted at the north end — scary — not a soul there,” said Tad Stanwick, the Navy’s scientific liaison officer, in David Stallman’s book on Operation Bumblebee. The island was perfect for the federal government, which seized it in 1946 and built eight research towers there. Each one sits on a 900-square-foot concrete platform that’s five feet thick and held up by 41 pilings buried 40 feet into the sand.

Two-stage test rockets were assembled in what is now the Missiles & More Museum. The launch platform is now the Jolly Roger Inn’s patio. The missiles flew at supersonic speeds along a path between the eight towers, each one positioned on a precise longitude and latitude to measure the ramjet’s performance. “It was just a little-bitty engine, and it would shake a 60-foot concrete tower,” Harold Dail told the Fayetteville Observer in 2001. As a photographer on the firing range, Dail had a front-row seat whenever a missile launched. “You could hear it burning the air, it was going so fast.”

More than 200 rockets launched from Topsail Island between 1946 and 1948. After that, the project shifted to California and New Mexico, and the towers were sold to the public. When Tower One went on the market in 1991, Lloyd Bost was leaving the island after a long vacation. He’d always had his eye on the structure, and he turned back to make an offer. “I doubt I would have bought anything else,” Bost says. 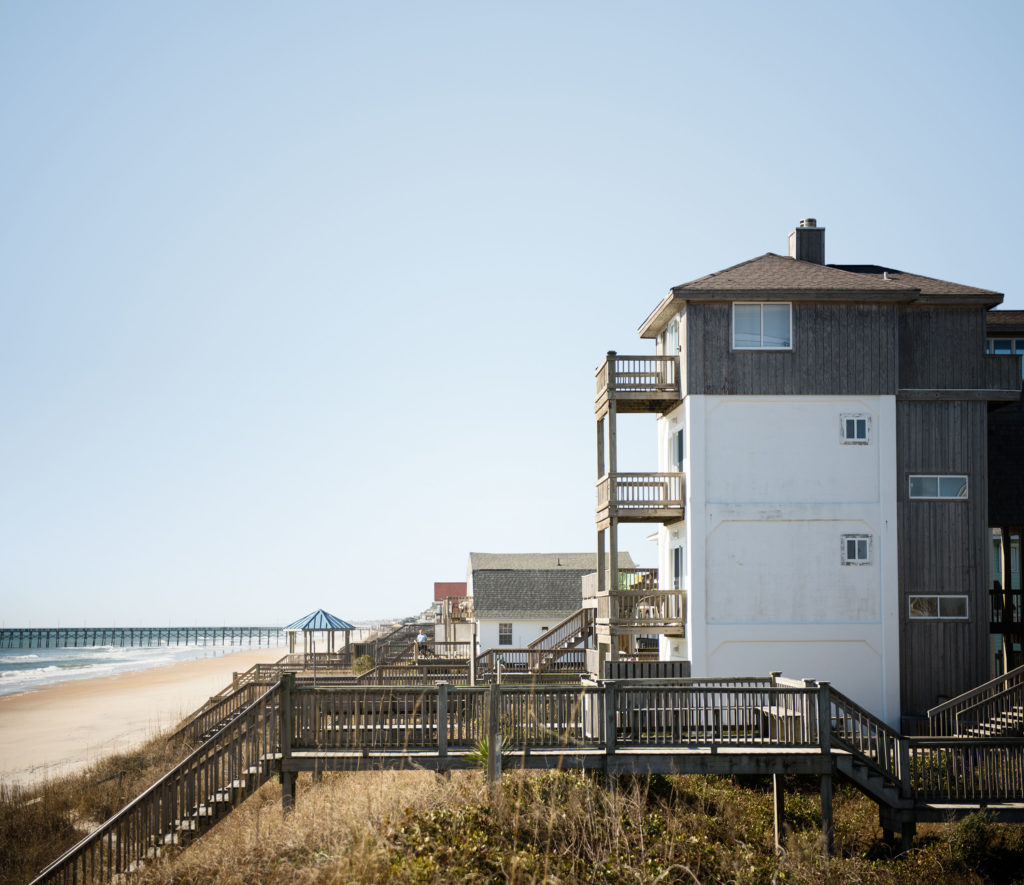 Tower One sits at the south end of Topsail Island. A two-story beach house was attached to the southwest corner of the tower in 1949, and windows were cut into the tower walls. After Bost bought the tower, he spent the next several years renovating the beach house. Before the work started, though, Bost had one request: “I wanted it to look military.” Unlike the others, Tower One looks decidedly Cold War. The house and tower are the same concrete gray, Bost displays replica warning signs that have tricked tourists.

Towers One and Five are now vacation homes, but Tower Three still looks like it did in 1946. Driving down South Shore Drive, it sticks out like a jagged tooth in a mouth full of pearly whites. Three stories tall with bare concrete walls, broken windows, and plywood covering the doors, Tower Three is badly in need of restoration. Looking at it, it’s easy to imagine a time when rockets buzzed overhead.

But Tower Three owner John Gresham wasn’t thinking about the tower’s legacy when he bought it in 1998. He was just impressed that it had survived Hurricane Fran leveling the island two years before.

“You’re buying a piece of history, but I wanted a place to survive a hurricane,” Gresham says. “If all else fails, I like that it isn’t going anywhere.”