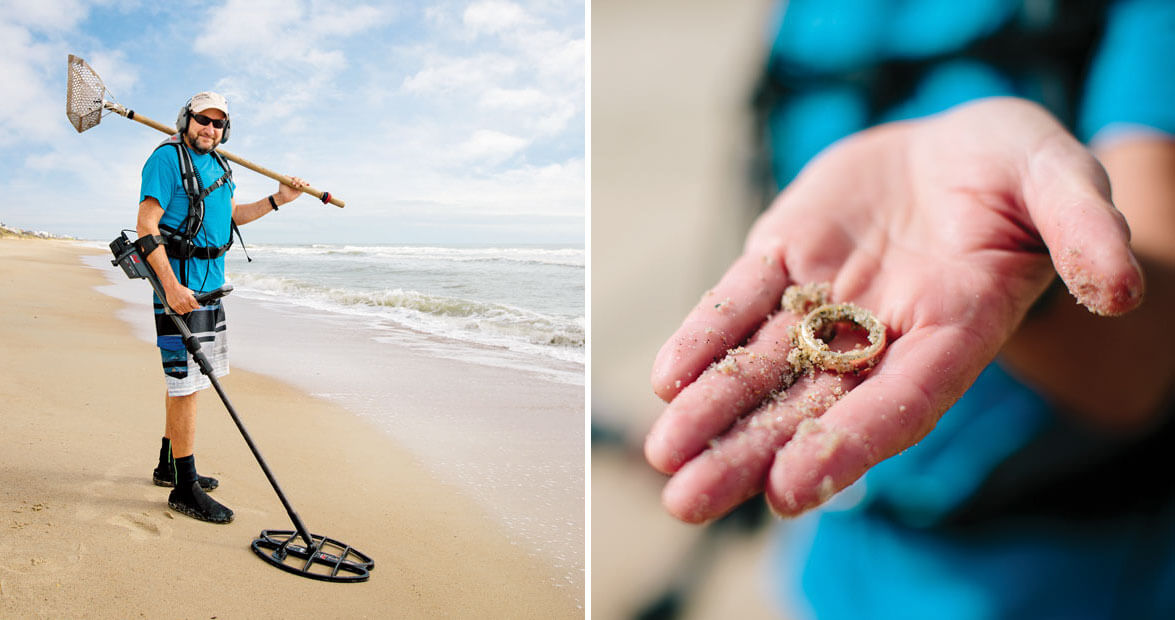 Steve Ray wades along the Bogue Sound shoreline near Morehead City, making small, graceful arcs with his metal detector. A light wind ripples the water. Sailboats and brightly colored sportfishing charters slip through the channel. Ray wears a painter’s cap pulled low over his brow, resting just above his sunglasses. He moves slowly, methodically, like an astronaut surveying the surface of the moon. Except that this is a far cry from the cold void of space — Ray is standing under the blue sky of the Crystal Coast, combing the water and sand, searching for my sister Evan’s beloved St. Catherine’s High School class ring.

She had lost it the night before. We were in the sound, throwing a football back and forth as headlights and taillights swept across the nearby Atlantic Beach bridge. Evan reared back, released the ball, and — plunk — her ring sank to the bottom. My family spent the next hour with flashlights, scanning the shoreline, searching for the ring more out of moral support than with any real hope of finding it.

The next morning, over breakfast at the Oceanana Pier, Evan was still sulking when our mom, in desperation, turned to Google. Steve Ray’s website popped up: Emerald Isle Metal Detecting. She dialed the number. “I’ll be there in 20 minutes,” he said.

“The first time I saw a target in the sand, I was hooked.”

Ray, a bearded 55-year-old with a buck tattooed on his left shoulder, is a sportsman who’s added a metal detector to his arsenal of hunting gear. He opens the hatch of his black SUV, uncovering an array of high-tech equipment: multiple detectors, including his primary weapon, a Minelab CTX-3030 with an LED screen; his Stealth sand scoop, and a pair of headphones. Within 10 minutes, Ray is on the beach, all geared up to look for Evan’s ring — the Minelab strapped to his right arm and thrust forward, his left hand dragging the scoop behind to mark where he’s already searched. Ray is the guy who swoops in like Superman to recover the beloved baubles we lose to the sea. There is nothing else for us to do now but watch and wait.

Ray began metal detecting in 2012. He and his wife, Kimberlee, had moved to Morehead City from Columbus, Ohio, to help take care of her ill father. After retiring from his career as a computer operations supervisor for the State of Ohio, Ray had time on his hands. But the last thing he wanted to do was spend it lazing in the sun all day. Back in Ohio, Ray had been an active outdoorsman who liked to hunt, fish, and hike through the woods. “I don’t like sitting around,” he says. “If it weren’t for my wife, I wouldn’t have come to the beach.”

One day, Ray was down on the beach at Emerald Isle when he saw a man wading near the shore, scanning underwater with a metal detector. He struck up a conversation and, within a month, Ray had a Tesero Sand Shark metal detector and a $650 hole in his wallet. “The first time I saw a target in the sand, I was hooked,” he says, referring to the loud hum a metal detector makes when it “sees” something. “It was just some modern coins, but I love the idea of finding something that people walk over every day and never find.”

Metal detecting has taken over Ray’s leisure time. He still returns to Ohio during the winter months for bow-hunting season, and he enjoys hiking through Croatan National Forest and at Fort Macon State Park. But when it comes to hobbies, “metal detecting has superseded them all,” he says. He goes out four or five days a week now, and many of his new friends are detectorists, too. He says they enjoy the peace they find in the midst of summertime chaos. “We’re alone on a crowded beach. We’re out there, headphones on, glasses on,” he says. “If people come up to me, I take the time to talk to them, but generally I’m in my own little world.”

The detectorist community is a tight-knit hobbyist group whose members share images of their finds with each other by text or social media. But Ray is one of the few in the Emerald Isle area who have made a business of recovering lost items for tourists and locals. He’s not in it to get rich, he says — for a couple of years, he worked on a donation basis — but he does have expenses, so he turned his hobby into Emerald Isle Metal Detecting. What’s most important to him is reuniting a treasured ring or bracelet with its distressed owner. He estimates that his success rate is about 75 to 80 percent, but a few failures still stick in his mind.

Like the woman on Topsail Island who lost her engagement ring in knee-deep water. “The look on her face,” Ray remembers. “She was heartbroken.” He fought the current for hours but came up empty-handed. “I hated to give up,” he says. He’s returned to the spot twice in hopes of finding it. No luck.

The triumphs are what keep him going: The man who lost his deceased father’s bracelet in Emerald Isle. When Ray found it, the guy told him, “I feel like part of my dad is back.” The family in Surf City that stood and applauded when he recovered a relative’s wedding band. The Citadel graduate who lost his class ring — the one he wore during multiple tours abroad. He told Ray after the recovery, “Buddy, you just made my whole year.”

Ray can add my sister to his list of successes. Within 15 minutes, the metal detector spots its target. Ray scoops up a dripping mass and wades back to the beach. There it is: Evan’s gold class ring, all wet and caked with sand and seaweed, like a pearl in an oyster. My sister is thrilled, and because she is thrilled, so is Ray. He thrives on the enthusiasm of people who come to him with desperate hopes and low expectations.

“I get it all the time, people telling me they thought it was lost forever,” Ray says. “It actually gives me butterflies to make somebody so happy.”

Later, my mother reflects on all the drama and on Ray, who, that morning on Bogue Sound, turned our family’s bad day into a good one. “He’s as close to a superhero as I’ve ever encountered,” she says. “He’s got this quiet demeanor, like Clark Kent. Then he swooped in and saved the day. He might as well have taken his glasses off and put on his spandex suit.”