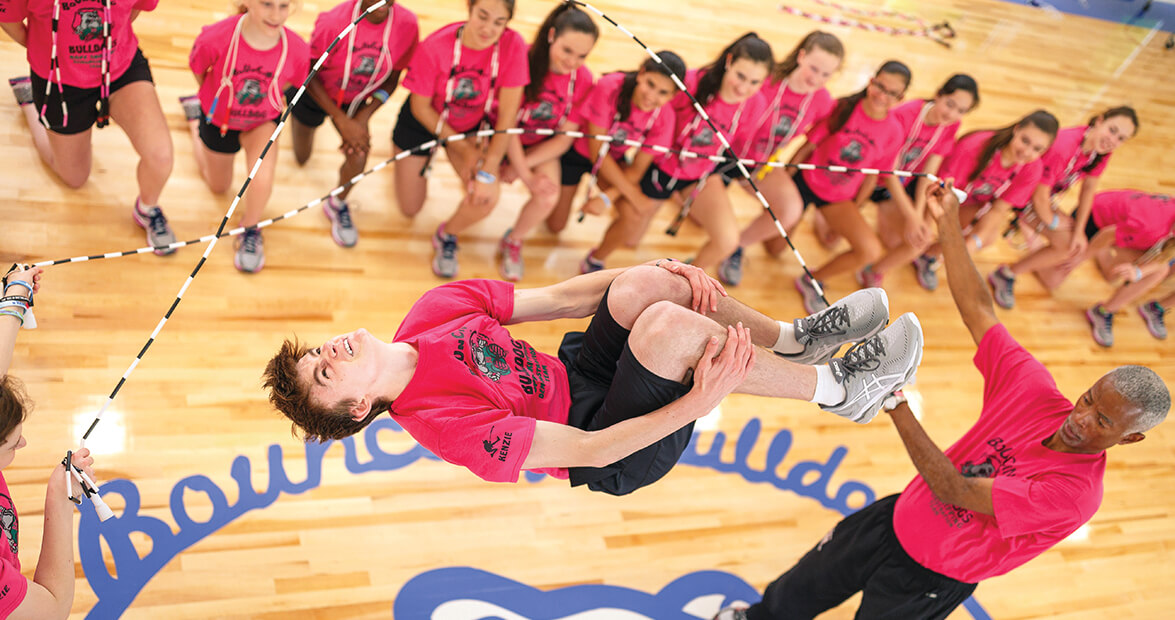 A jump rope is a simple thing, really: two handles and a rope no wider than your pinkie.

But in Ray Fredrick Jr.’s hands, a jump rope has become so much more for generations of Triangle-area kids. For them, it is a confidence builder and a ticket to see the world.

For the past 30 years, Fredrick, a retired health and physical education teacher, has used a jump rope to help train and educate young athletes. He’s soft-spoken, but he has an intense, impenetrable gaze that all of his jumpers recognize and remember. His gaze doesn’t scare them, though; it endears them to the man they call Coach. To many on the team, he’s a surrogate father. 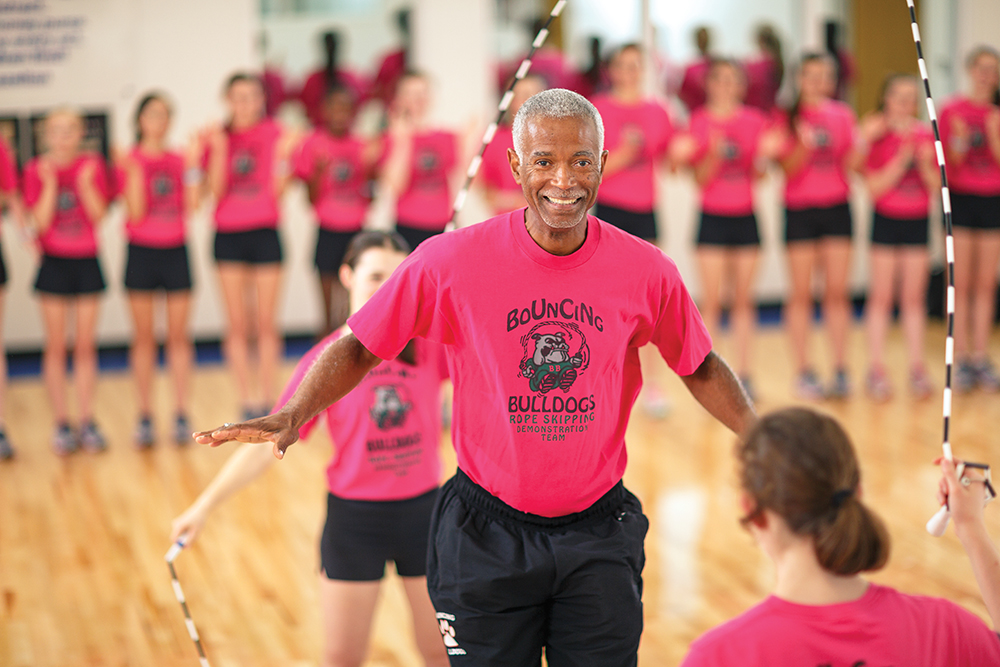 Fredrick teaches and trains his jumpers seven days a week, but at practice, he lets his captains and older team members lead. Then, with no more than a nod, he’ll stop practice. The big room filled with 150 jumpers goes whisper-quiet as Coach tells a motivational story about his life growing up on a Cleveland County farm, milking cows, fetching water, and working way before daybreak.

“Remember,” Fredrick tells his jumpers after one Saturday practice. “Life is like a farm. If you plant good seeds, you’ll have a successful harvest.”

Fredrick adopted the Bouncing Bulldogs moniker from Durham’s Hope Valley Elementary School, the home of the Bulldogs. It was there that he taught physical education and first used a jump rope to get kids moving. The team was born in 1986 with 15 Hope Valley third- and fourth-graders.

Today, more than 350 jumpers from 31 nearby schools don Bulldogs uniforms created by acclaimed designer and Chapel Hill native Alexander Julian. When they’re not competing, jumpers proudly wear T-shirts that announce to the community — and the world — that they are Bouncing Bulldogs.

Fans from as far away as China and Australia have watched them perform and compete. The team has won seven national championships and nine world championships as buzz grows internationally of making jump rope an Olympic sport.

The Bouncing Bulldogs even anchored the 2007 jump rope documentary Doubletime, in which Tim Martin of Durham’s Hillside High showed off the skills that made him the best single-rope jumper in the world. Martin is now the team’s volunteer assistant coach. Every practice, with a stopwatch in hand, he’s a walking study of concentration. Martin’s jumpers have watched Doubletime, so they’ve seen him in action. They ask questions, and Martin always has something to say.

“Jump rope,” he says, “showed me that there is so much more in the world.”

In April, the Bouncing Bulldogs opened what Fredrick believes is the world’s first gym built specifically for jump rope. It’s 5,800 square feet and sits on the border of Chapel Hill and Durham. It cost $1.3 million, almost all of which was raised in just five years. The donations came from 400 people, with 95 percent coming from the families of jumpers. 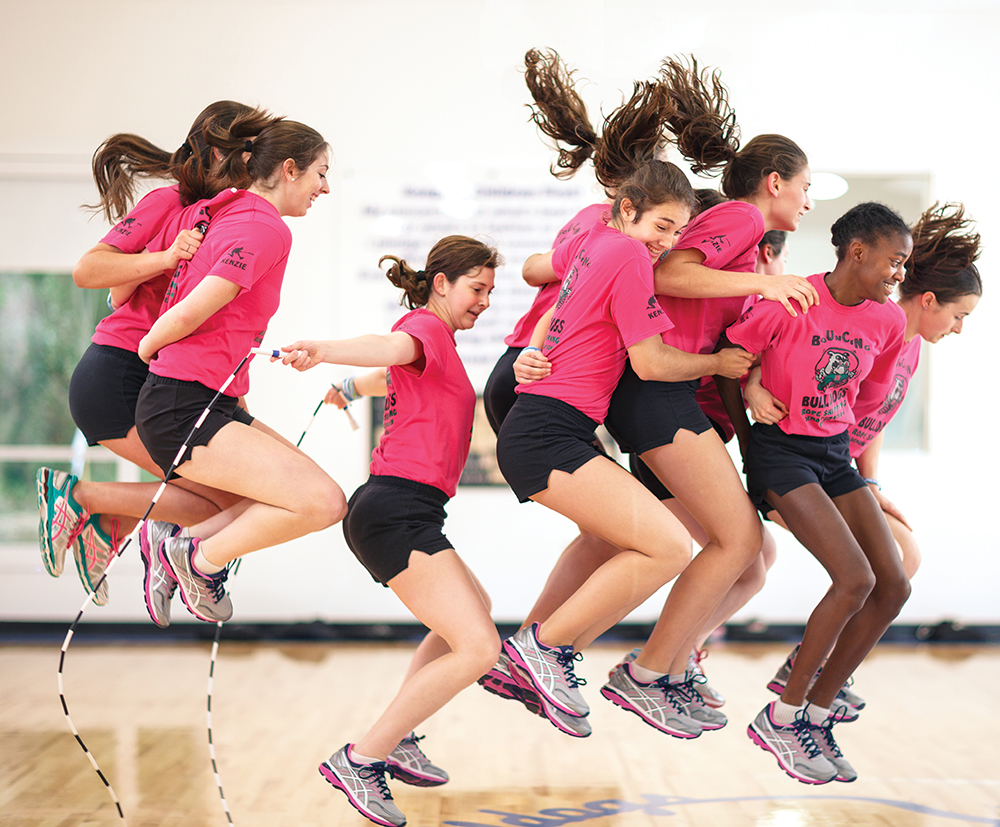 That support is not a surprise. Loyalty runs deep with the Bulldogs. Donations and fees from jump rope camps and classes cover the $150,000 the team needs every year to compete and travel the world. And Fredrick and his wife, Patricia, don’t pocket a dime. They see the Bouncing Bulldogs as their mission, to bring together a diverse team of jumpers, ages 4 to 26, and help them become good athletes and better human beings.

The jumpers share the same intensity as their coach. Whether competing or training, they’re always looking forward, shoulders slightly hunched, their rope a blur as it whips overhead and underfoot.

Single-rope tricks are learned fairly quickly, but the more challenging, two-rope maneuvers, known as double Dutch, take time to master. Jumpers train for years, and they fail again and again. When they finally nail the toughest tricks, it hits them: Persistence and discipline really do pay off. Then, they work on another new trick, while teaching what they’ve learned to younger jumpers, and helping one another.

That, they say, is the Bulldog Way.

Even after jumpers move on, they stay involved. Some become judges, program donors, and volunteer coaches like Martin. Others simply come to practice to see Coach and recall how the Bouncing Bulldogs taught them to persevere and appreciate the camaraderie of competition.

Take former jump rope champion Mary Hunter Benton. Benton, 26, is in her third year of medical school at UNC-Chapel Hill, and her world now is one big study session. She comes to practice for perspective and to help young jumpers.

On her desk at home, a foot-tall crystal globe, one of her world championship trophies, sits beside her first jump rope award — a purple eighth-place ribbon she won when she was 8.

Benton also keeps with her collection a palm-size pin with a picture of Kenzie Ruston, a jumper she helped train. As a teen, Ruston became one of the world’s best jump rope athletes. In January 2016, a day before her 18th birthday, the senior from East Chapel Hill High died in a plane crash during a family vacation out West.

Ruston may not be physically with the team, but her memory lives on with her fellow Bulldogs. Step into any space where the Bouncing Bulldogs train, and you’ll see her quotes, such as, “Work for a cause, not for applause.” The words inspire jumpers like Bulldogs co-captain Anna Reeb, a 2017 graduate of Carrboro High.

Reeb and Ruston were longtime partners in pigtails. Together, they won 12 world championships and, in the process, became forever friends. A photo collage of her best friend hangs on Reeb’s bedroom wall, and she wears four bracelets that carry the name “Kenzie.” At practice, Reeb remembers her friend, but she’s not overcome with grief. She feels joy and energy, and the thought that sticks with her is: “Thank you, Kenzie.”